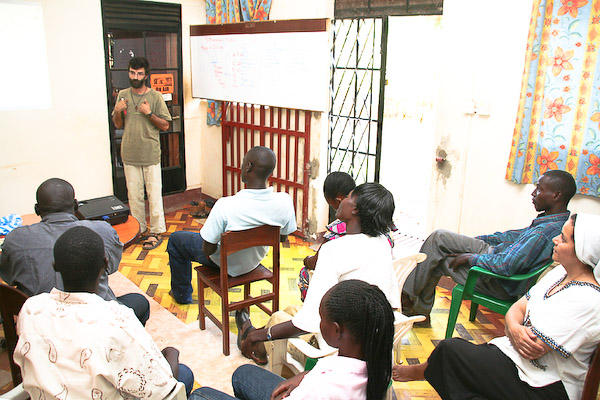 June 8 of the 2009 at 9 in the morning, Radio Bakhita marked 10,000 hours of transmission, a significant achievement that should not pass unnoticed.

Today, 8th June 2009 at 9:00 am, Bakhita Radio has completed 10,000 hours of transmission, a remarkable achievement that I did not want to let it pass unnoticed.

I do believe that God is working through Bakhita Radio, accomplishing this miracle of reaching out to thousands of people from a six square meter studio! It represents truly the voice of a significant segment of the population in the capital of the South.

It is not always easy to asses the level of success or impact of this type of projects.  However we strongly believe that the radio in Africa is a very powerful means in order to launch messages and values that are Good News and are a call to work for peace and development at all levels.

Bakhita Radio is the first fruit of the Sudan Catholic Radio Network offered to the Sudanese Church by the Comboni family on the occasion of the canonization of Daniel Comboni.

Bakhita Radio has opened a path to follow by the other forthcoming stations.  During these two and half years we have been developing a technical and managerial template in answer to the complex realities of South Sudan.  This is particularly relevant in the selection of appropriate and balanced sources of energy.  The station is also a good testing ground for a variety of computer software and networking setups.  There is also a growing consolidation of the different functions of financial management and human resources

The members of the staff of Bakhita Radio are all Sudanese.  This was a clear and radical choice since the very beginning in line with the charisma of Comboni.  Despite of difficulties and disappointments the station is coming up with a group of well motivated young people trained, mainly on job.

The staff of the radio is made of 17 young people mainly women fully motivated with the happiness and satisfaction of being pioneers in this enterprise that plays a vital role in the development of their country.

From the financial point of view, the Radio has performed beyond expectations.  This is a great step towards self reliance and sustainability considering that all income is locally generated through advertising, announcements and sponsorship by partners.  It is in this area that Bakhtia Radio can play a prominent role for the whole Network through its marketing department.  Due to its privileged location in South Sudan, it has the potential to attract clients and partners in the areas of interest of the SCRN.  Most NGO’s present in Juba and working with Bakhita Radio run similar programs in other parts of South Sudan where other radios of the Network will operate.  Bakhita Radio is therefore a critical player within the Network.

The station did not developed according to a meticulously pre-designed plan.  It grew steadily in fidelity to the changes taking place, both ad intra and ad extra, but always faithful to the mission by which the network was set up.

Bakhita Radio is also gaining momentum as a point of reference in the life of the Christian community with its constant presence in the main events of the Church at diocesan level.

The road ahead is not an easy one and there are still many challenges and obstacles to be dealt with.  In a project like this success is not always visible or even measurable.  It is important to have strong faith and to believe in the potential of this means of communication to reach out to the people with a message that adds value to their lives, a message that is good news that talks about peace and a better life.  People in Juba are given a voice to echo their joys and sorrows.  If Bakhita Radio is able to create a forum of dialogue where the most vulnerable of society are able to speak up challenging an increasingly corrupted and unjust society, then it is becoming a moral reference and a critical voice.

Each and every one of these hours are impregnated with their enthusiasm, joys, frustrations, hopes, or in just one word with their lives.

There are other radios coming up in the network: the Voice of Peace in the Nuba Mountains, Radio Malakal and Radio Emmanuel in Torit.  Soon the radios in Rumbek and Yei will be launched.

Let us continue working to make the Sudan Catholic Radio Network grow in the good direction spearheaded by Bakhita Radio with the conviction of Comboni: “this is God’s work”.

May Bakhita, the woman who crossed the line between slavery to freedom intercede for us.