Churches speak against negative impact of mining at WSF 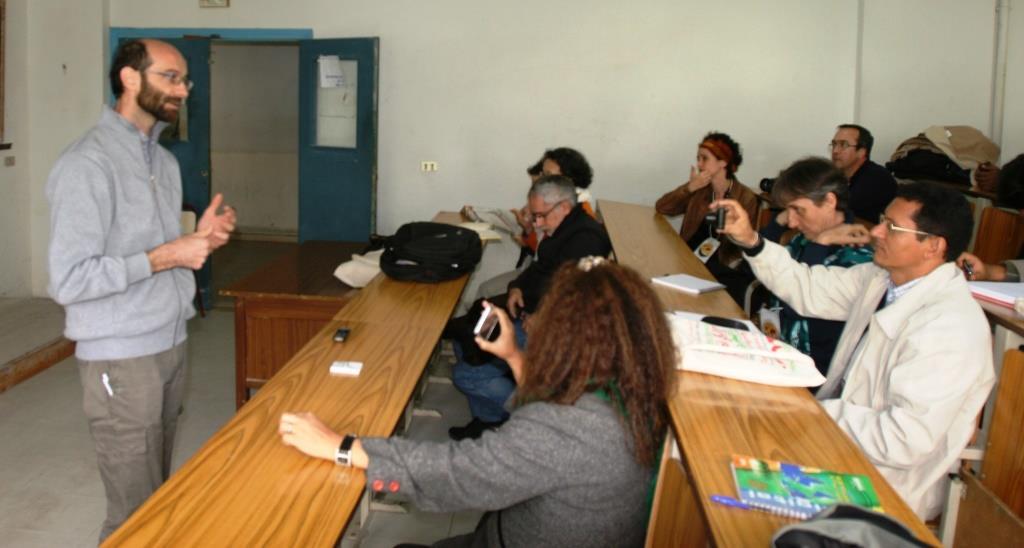 Tuesday, April 7, 2015
The social and ecological cost of expanding mineral exploration and extraction was highlighted by the churches in a side-event at the World Social Forum (WSF) held last week in Tunis, Tunisia. Church representatives stressed that mining projects often hamper the wellbeing and sustainability of local communities, noting the need to find new alternatives to extraction as a development paradigm. The side-event, which took place on 27 March, was organized by Iglesias y Minería (Churches and Mining), Franciscans International, Missionários Combonianos and the Rural Women’s Assembly, among other groups. In the picture: Fr. Dario Bossi speaking at the churches’ side-event at the WSF in Tunis.

The 14th WSF this year has gathered some 70,000 participants from around the world, representing more than 4,000 mass-based movements and organizations. The World Council of Churches (WCC) was represented at the event by Athena Peralta, the WCC’s consultant for the Economic and Ecological Justice Programme.

The discussion at the churches’ side event, titled “The Christian Church and Mining”, underlined how several countries especially in Latin America are increasingly witnessing the negative impacts of mining projects. According to several reports, these projects have harmed the health and the sources of sustenance of people in mining areas.

In response to this situation, since 2013, the Roman Catholic Church and Protestant church groups in Latin America have worked together to support communities resisting large-scale mining, promoting the protection of vulnerable communities and working together to find alternatives to extraction.

“Churches are among the most reliable actors in defense of the communities’ rights to their territory, land, water and all the common goods,” said Fr Dário Bossi, a Comboni missionary and member of the International Network of those Affected by Vale, a mining company. “In Latin America, our network Iglesias y Minería is strengthening its position for the promotion of social and ecological justice,” he said.

“As Christians we have a common vision of a just and peaceful world,” said Athena Peralta.

“To translate this vision into a reality we must address the injustices arising from extractive activities and the extractive model of development. This model tends to benefit only multinational corporations and economic elites at the expense of people and ecology,” added Peralta.

The participants urged support for the struggles of communities against mining corporations. The churches must contribute to a spirituality of struggle in defense of life and the human right to land and water, they said. They also encouraged churches to lift up in dialogue the cries and demands of vulnerable communities affected by mining.

The church representatives agreed to raise awareness about mining issues and to develop collaboration among affected communities. They strategized to publicize and oppose human rights violations in mining areas, such as displacement and the persecution of community leaders and activists. They hoped to share their reports with the United Nations and other international platforms for effective redress of the situation.

The participants at the event also agreed strongly to denounce any attempt by mining companies to “buy the churches” and influence their theologies and liturgies.