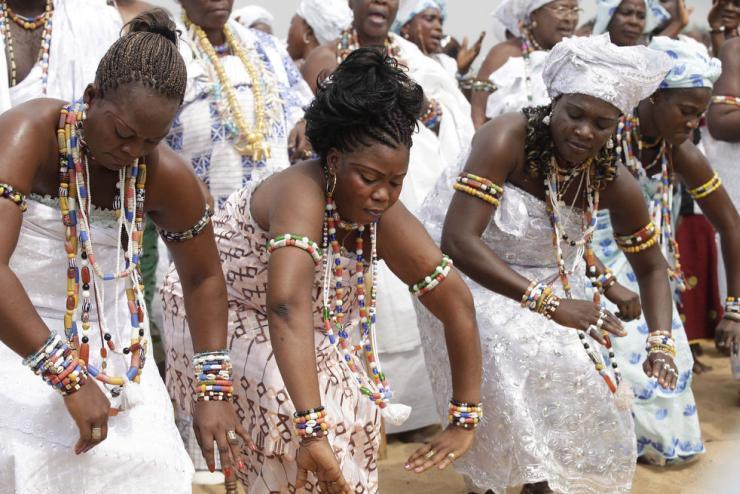 Monday, November 27, 2017
The Fon people are the largest ethnic group of Benin, and make up 39% of an estimated population of 10 million inhabitants. This ethnicity is mainly settled in the area around Abomey, capital of the ancient kingdom of Danxomé (Danhomè), in central Benin, but there are also large Fon communities in the South. We look at the marriage celebration. Marriage implies a gradual preparation of the couple for married life, and the deepening of the relationship between the spouses and their reciprocal families.

Most marriages are arranged by families, because these are events that involve the entire community. When the parents of a boy or a boy himself are interested in marrying a girl, the father of the boy sends an emissary to communicate his intention to the father of the girl. The girl’s father, after consulting his wife, communicates his decision to the boy’s family.

This phase is called vinandononu. After the arrival of the first rainy season, the groom-to-be helps the girl’s father to cultivate his field. This custom is called assitoglélilè. The girl’s father then consults the Fa in order to know whether this marriage can be celebrated or not, the Dù (answer) is brought by emissaries. Later on, the suitor’s father visits the bride-to-be’s father to discuss the Du. From that moment on, the two families start exchanging courtesies. The boy’s family is supposed to donate the so-called lanu, a small present consisting of six meters of fabric and two bottles of local liquor, the sodabi, to the girl’s family, when she has her first menstrual cycle. Later on, the family of the groom-to-be is supposed to give the dowry which consists of several gifts to each member of the girl’s family – her parents, brothers and sisters, uncles, aunts and even the young people of the village.

This is a time of celebration with the participation of many people, and food and drinks are offered to relatives and friends. After the wedding ceremony, the groom officially visits the girl’s parents for the first time – he is allowed to visit them every now and then, as long as he brings them a present. After some time, the groom’s parents are allowed to take the bride away from her home. This moment, which is considered particularly spiritual and meaningful among this group, is called Aces bio gbena – asking for permission to take the girl away from her family.

The family of the groom brings a couple of roosters, a couple of chickens, some corn, beans and palm oil to the bride’s family. All these elements are associated with the worship of the dead. A pair of animals is sacrificed on the Asen, the altar used for paying tribute to the deceased of the bride’s family. The other couple of animals is sacrificed at the foot of Towxyo, which is the altar dedicated to the ancestor who founded the community. This is a rite of blessing that marks the fact that from that moment on the girl is under the custody of her husband’s family. At this point, the girl is taken to her husband’s house by her friends and aunts. Her mother-in-law takes care of her and her friends and aunts for a few days. At the end of this period, the bride is asked to cook a meal for her husband’s family and in the meantime her friends and aunts leave.

The Assidabogbohonna is the last phase of the wedding ritual. The husband sacrifices a ram to be offered to the Towxyo, the ancestor who founded the community. This ceremony marks the fact that the bride has definitely become a member of her husband’s family and entitles her husband to bury her where he wants to, in case she dies.

The Assidabogbohonna also sets forth that children born to this couple belong to their father. If this final ritual is not performed, the bride’s family, in case of her death, has the right to bury her, and can obtain the custody and the right to raise some of the couple’s children.

The real strength of the Adja-Fon’s culture is definitely their spiritual sphere, focused on the Creator and the worship of the dead. This spirituality keeps the Fon people united despite the events of time. This group, in fact, while open to changes, has also been able to keep their culture and identity alive through their constant reference to God and to the dead. An example of ethnicity that is still strong and alive because it sticks to its primary principles.
Jean Baptiste Sourou (Comboni Missionaries)