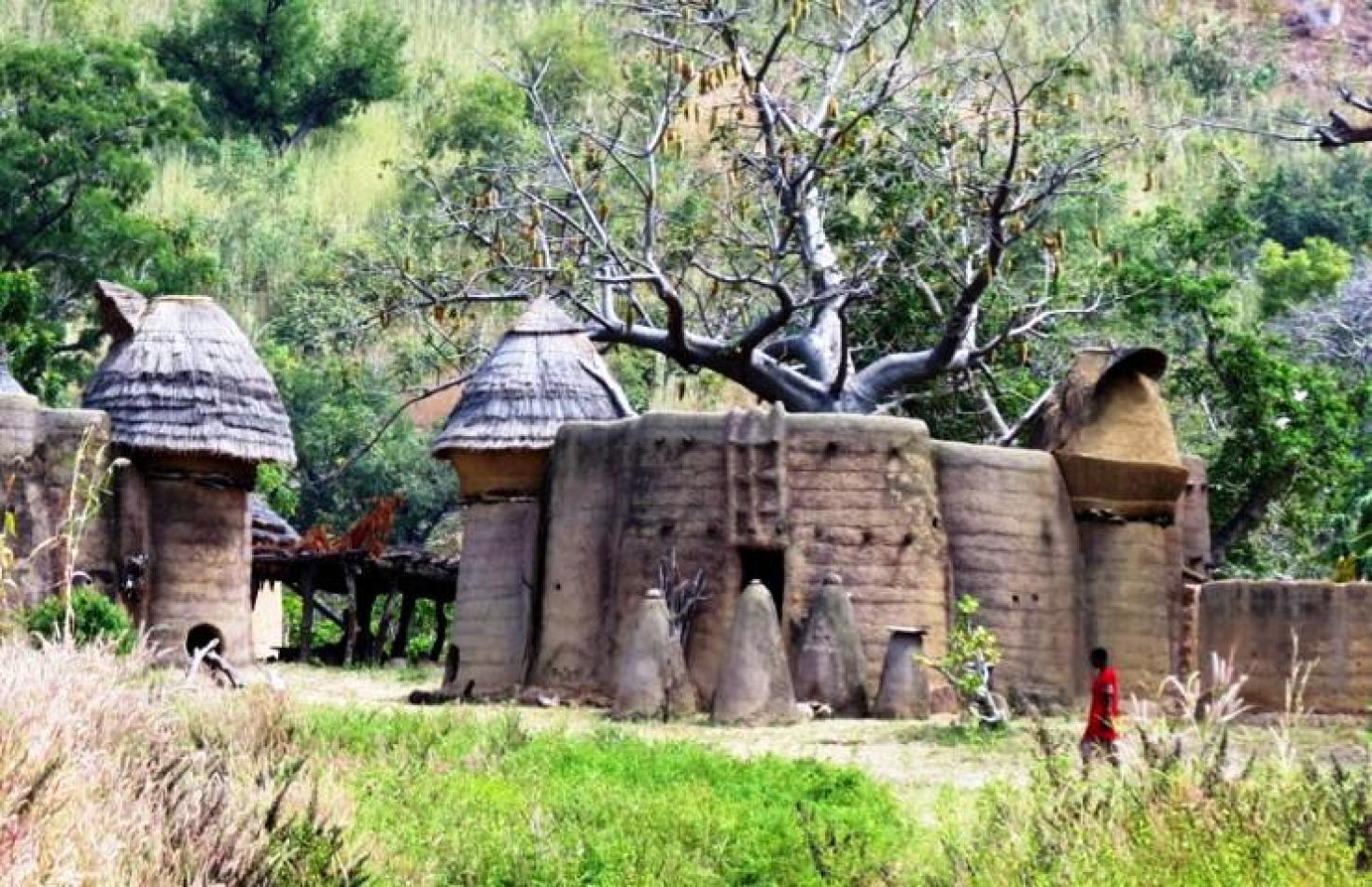 Wednesday, July 18, 2018
In the north of Togo and the north-east of Benin in the Atacora Range live the Betammaribe, also called Somba, a people with a history of great hunters and warriors. Here we take a brief look at the architecture of their houses, unique and original in Western Africa.

Scattered throughout a green valley among the fields of cultivated sorghum, millet and yam, with their magnificent mango trees and huge baobabs, the tata Somba, meaning ‘the houses of the Somba’ (takyienta in the local language), we find the fascinating mud dwellings with multiple fortifications, each one isolated and a distance from its neighbours. Each tata houses just one family and its dimensions reflect the wealth of the owner and the size of the nuclear family.

Each unit lives separately. There are no real villages, properly speaking. Autonomy is a salient trait of the social organisation of the Somba and constitutes an original characteristic among the populations of tropical Africa.

The origin of the tata is said to go back to the eighteenth century when the populations of the region of Fada N’Gourma, in Burkina Faso, took refuge in the Atacora Mountains to escape Islamisation by the Mandingo and the Songhai. Later on these buildings helped to resist and drive back the attacks by the Ashanti, the slave agents of the empire of Dahomey and, lastly, at the end of the nineteenth century, attacks by the Germans.

The architecture of the dwellings recalls the warring history of these people. A typical tata is, in fact, a fortress in miniature made up of a series of towers connected by a thick wall, about four metres high, with a single door opening to the outside that is closed with a panel of millet or bamboo. This single, easily defended entrance once served to strike at the enemy before their eyes became adjusted to the darkness.

The entrance leads to a wide room divided into several compartments. The largest of these is designed to house the animals of the family during the night. Above hang dusty skulls and jaws of animals, old hunting trophies. Beyond, in a smaller room to one side, there is a mortar for grinding cereals. The head of the family sleeps in this same room, on the bare earth or on a bamboo mat.

An adjoining room houses the kitchen with the hearth for preparing food. An opening in a wall to the side not only lets in some light but also allows access to a second balcony by means of a forked branch that serves as a ladder. From there, another ladder gives onto the main balcony where family life takes place.

There are small towers on the sides, each with a conical roof, that serve as granaries for storing cereals where they can be dried, sheltered from the rain and rodents. Then there are the huts arranged as bedrooms, round and very small. One of them is used for cooking during the rainy season.

The height of the main balcony varies from 3 to 4.5 metres. Low walls divide the floor into sectors, each with a drain-hole fitted with a ceramic or bamboo pipe, to take away the rainwater or the women’s bath water. The men use these facilities only when they need the toilet during the night. For reasons of defence, these building have no windows so ventilation occurs through a chimney in the roof that allows the smoke from the fire to go out. In the past, this chimney was sometimes used by the house owner to drive away the enemy with his bow and arrow.

The tata is also a symbolical representation of the family. The central part of the rear courtyard is a sacred space. Various fetishes are placed at its entrance with one or more altars (cones of beaten earth) of the ancestors, the guardians of the wellbeing and security of the family. Society is, in fact, sub-divided into clans or related groups that have common ancestors.

In the sacred space there is an altar for each person and this shows the number occupying any given house. This symbolism is also shown by the arrangement and orientation of the various parts of the tata. For example, the main facade is turned to the west from where the Betammaribe are said to have originated. The rear of the house looks to the east from where the evils that may strike the community are believed to come. The parts facing north are where female activities take place; those facing south are reserved for the men. The woman of the house decorates the external walls, tracing grooves in the wet mud before it dries, thus creating parallel channels.

When young men are ready for marriage, they shoot an arrow from the paternal balcony and build the new tata there where it lands. However, the ground must be free of evil spirits. For this reason the new foundation starts with some ceremonies peculiar to each clan. In some clans, a hole is dug where the tata is to be built and a tree trunk is fixed in it.

If, after some days, the trunk falls, this is a sign that the ground is good for building. Other clans take some of a local drink, two hen’s eggs, some yam, red chicken feathers and some additional secret ingredients added by the ‘witch doctors’. After the ceremony the eggs are incubated – if they hatch, the ground is suitable for building.

The name Betammaribe means ‘those who know how to build’. The building materials are wood, straw and mortar (a mixture of clay, mud and cow dung). When the plaster is dry, it is covered with a decoction made from bark or the karit fruit so as to harden the surface and make it waterproof. A tata may last as long as twenty years. During the building, the men and women have different tasks: the men build the walls while the women carry water and mud from the river.

In Benin there are eight types of tata. Some have the access to the balcony on the outside. Often, the walls are painted with the same tribal signs or patterns that the people have on their faces and bodies, received during a weaning ceremony that marks the official entrance of an individual into the clan or the family itself. There are many family variations of these scars. The fact that one sees on one’s body the same signs as those on the walls of one’s house, favours the identification each individual has with their house.

The modern world is also reaching this place. Nowadays, young people prefer to sleep in a small tin-roofed cement house built near the courtyard. However, those who visit these places, among the most authentic on the continent, may realise that here life has gone on unchanged for generation after generation.
[Alessia De Marco – Comboni missionaries]