Fr. Brighton Multiply Zimba: ‘A pimp was that book!’ 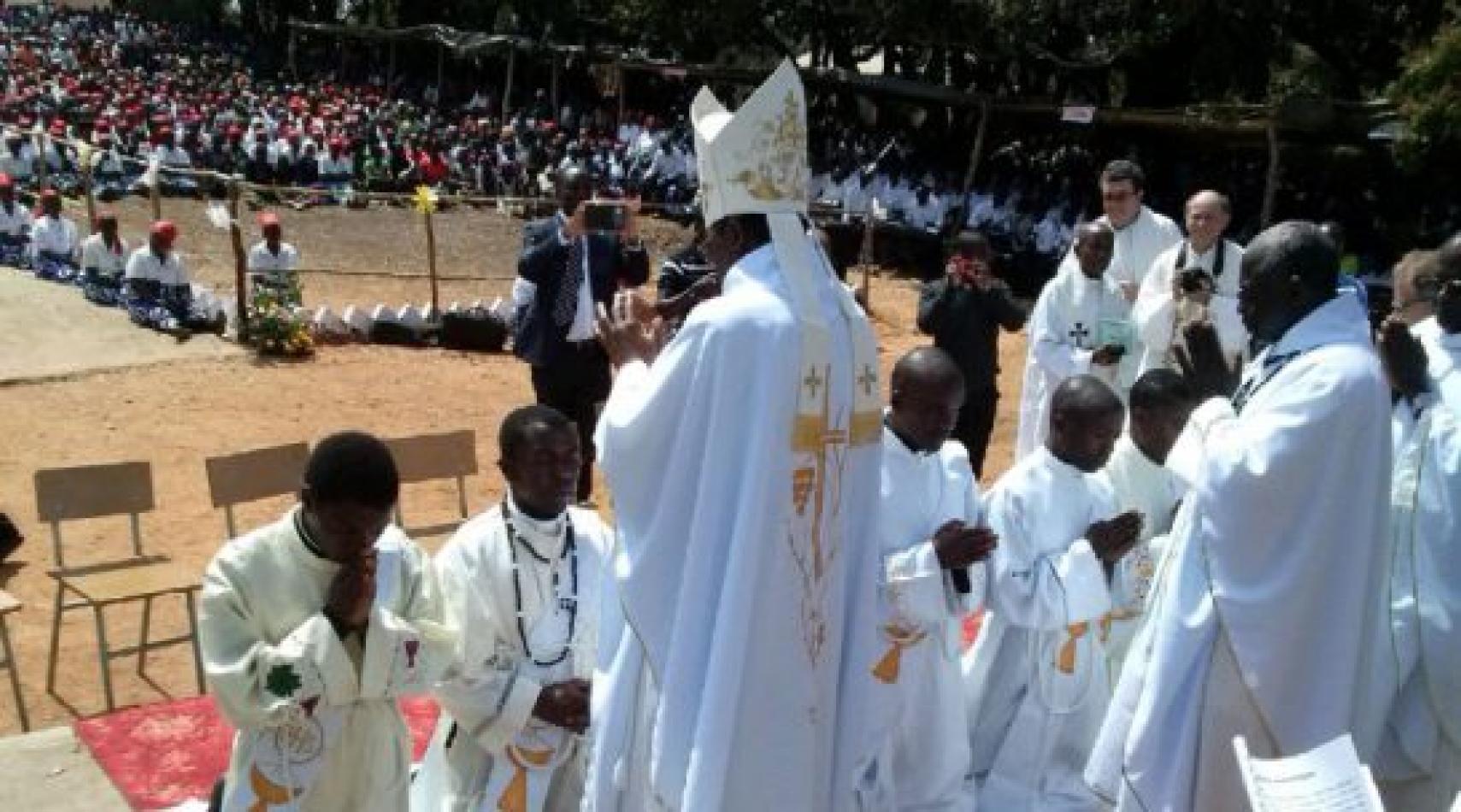 Sunday, September 23, 2018
A ‘church kid’ dreams of becoming a botanist. He loves reading short novels. One day, he lays his hands on a booklet titled “If the seed falls…” and buys it. It is not a work on botany. He feels fooled. Yet, he reads it all the same… and his life changes radically. Today, he longs to be a ‘seed of life’ in the land where the protagonist of the ‘cheating’ booklet had lived, worked and died. [Fr. Brighton Multiply Zimba, Mccj].

Since I was a child, I developed a strong feeling of affection for the Church. You may well call it love, if you wish. The fact is that, as far back as I can remember, I always felt a great interest and pleasure in it. Don’t get me wrong: I was not infatuated or smitten with it. I just liked it. I felt good to be part of it.

Most probably, that was due to the fact that rarely a Sunday or a feast passed without my family being involved with the local Catholic community. My father was a catechist and my mum was the leader of the Catholic women. At home, daily prayer was routine. Prayer life was flavouring anything we did.

You may think that all of that involvement in my childhood years would have caused a disdain or even hate towards the local church. This was not the case. I just went to church. It was a place that existed. It was part of my life, like going to school, breathing air or eating.

As a young boy, not much was gleaned about church, except that it was a normal occurrence, or event or location in my life. My teenage years, however, brought about a change in attitude. The local church became much more to me than an institution. I began to realise the importance of it. I learned that our chapel was more than a meeting place. It was to be a catalyst. It was not the building, the bricks, the mortar, the pews, the programmes, or even the ministries. It was God’s people gathered together for a specific purpose. The turning point, however, was just behind the corner.

In 1998, while I was studying at Chama Boarding High School, in Muchinga Province of Zambia, the most remote eastern area of the country, I came across a little book entitled Mbeu Ikagwa(“When the seed falls”). It was written in my local language, Chichewa. The cover was eye-catching, and the title quite intriguing. At that time, agricultural science was my favourite subject at school. Anything that had to do with plants and seeds stirred my attention. And since I was growing more and more into the habit of reading novels – to the point of experiencing a sense of uneasiness, if not guilt, for neglecting a bit school texts – I decided to buy it. I thought: “It will be an excellent complement to my passion for botany”.

As I leafed through the first pages, I noticed that the book had nothing to do with seeds and plants. It was not a work on botany, but a short biography of an Italian man, by the name of Daniel Comboni. To tell the truth, that name was not completely new to me: the parish I belonged to had just been entrusted to the care of an institute whose members called themselves Comboni Missionaries.

Disappointed and feeling somehow fooled, I thought at first of throwing the book away. But something inside me kept on pushing me to read at least some pages. After every few paragraphs, however, I went back to the title, trying to find some sense, but in vain. I did not give up. About half way through  the book, Daniel, the man whose life the booklet was presenting, was reported as saying: “The happiest day in my life will be the one on which I will be able to give my life for you”. 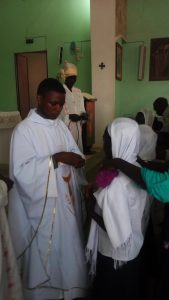 There was a flash of light in my mind. I immediately realised that the seed referred to in the title was not “aunit of reproduction of a flowering plant” (as my botany teacher would say), but something far more precious: it was the very life of Daniel Comboni, the founder of both the Comboni Missionaries of the Heart of Jesus and the Comboni Missionary Sisters. The sentence that had struck me was part of a homily he had delivered in Khartoum in May 1873, after his return to Africa as Pro-Vicar Apostolic of Central Africa. “Yes, I am now your father, and you are my children and, as such, for the first time, I embrace you and press you to my heart…I have returned among you never again to cease being yours and all consecrated for your greater good for ever. Come day come night, come sun come rain, I shall always be equally ready to serve your spiritual and material needs: the rich and the poor, the healthy and the sick, the young and the old, the masters and the servants will always have equal access to my heart. Your good will be mine, and your sorrows will also be mine. I make common cause with each one of you, and the happiest day in my life will be the one on which I will be able to give my life for you”.

Those words left me spellbound. Everything made sense now. Even the title of the book was spot-on! Comboni’s life had been a life thrown away, lost for the others, and yet completely gained! My mind went back to the gospel reading of the previous Sunday: “Unless a grain falls into the ground and dies, it cannot produce much fruit” (cfr. Jn12:24).

Not only did I finish reading Mbeu Ikagwa, but also I went back to it more than once. And I ended up falling in love with Comboni and his style of life. Indeed, a pimp was the book and he who wrote it!

Now something inside me was urging me to imitate Comboni and his decision: not just to offer part of what I had to others, but to spend my entire life for the evangelisation of Africa. His motto “Regenerating Africa through Africa” became a refrain in my mind.

My interest in knowing about mission and missionary life grew more and more, and I joined the parish vocational group, which was animated by Fr Dawit Wubishet (was it a mere coincidence?).

At first, I did not have the courage to tell my parents about this pressing desire, for fear that they would not agree to it, since I was the first-born of the family. Therefore, I kept it to myself. After finishing my secondary education, however, I could not hold it any longer. I took my courage in both hands and I opened my secret to mum and dad. To my surprise, they calmly welcomed it: “We respect your decision and will pray for you”.

With the blessing of the family, I began a serious correspondence with Fr Dawit. In October 2004, I joined the Comboni postulancy in Balaka (Malawi). It was a completely new journey for me. The three years I spent there

turned out to be a beautiful moment of integral growth. I came to appreciate more and more the value of friendship. I was called as an individual, but I was never alone, neither did I ever feel  lonely. Since then, God kept blessing me with fantastic companions, whose influence helped me to grow socially, emotionally, humanly and spiritually.

I enjoyed the philosophical courses I was asked to attend. They turned out to be essential in understanding of myself and the others better.

I still remember vividly the pastoral activity we got ourselves involved in during the weekends. Riding our bicycles, we would reach the various outstations of Balaka parish, and there we animated the liturgy, we visited the sick, we animated youth groups… I really felt that that was the life I was called to.

In 2007, I went to the Novitiate in Lusaka, where I remained until my first religious profession, in May 2009. Two beautiful years, during which I was helped to deepen my faith and develop my Comboni missionary identity. There were joys and pains… But my heart was overflowing with joy when I took the vows of chastity, poverty and obedience. The experience I had in the novitiate is still an unshakable point of reference in my present life.

The ‘seed’ is budding

For the theological studies, I was sent to Naples (Italy). Three years later, I went to Cairo, where I attended courses at Dar Comboni Institute for Arabic and Islamic Studies. I still remember the blood, sweat and tears that I put into the learning of Arabic. It was like entering into a new world. I had to become a child once again and re-learn everything from scratch. What a test it was! And how often I found myself meditating on Jesus’ words: “Unless you become like little children…”.

On October 10, 2013, I made my final religious profession in our beautiful Church dedicated to the Sacred Heart of Jesus in Ramses. The following month, I was ordained deacon at St Joseph’s Church in Zamalek. In my heart there was a deep sense of gratitude to God. Once again, I was taking important steps which were strictly personal, but I was not alone or feeling lonely. The Comboni family in Egypt, friends and companions from Dar Comboni and from neighbouring parishes, and, above all, parents, were surrounding me with love and support.

In July 2014, I went back to Zambia for my priestly ordination and August 2, 2014 was “the day that Lord had made for me”. It was a great day. My family, relatives, friends, Comboni Confreres from Malawi and Zambia packed the church. Significantly for me was the fact that I was being ordained with six other friends belonging to other congregations. Indeed, the whole church was there. I was thrilled.

After a  few weeks, the superiors posted me to Kosti, in the diocese of Khartoum (Sudan). The first thing I did when I arrived in the Sudanese capital was to visit the Catholic Cathedral. And I heard (believe me, I did hear him!) Comboni preaching: “I make common cause with each one of you, and the happiest day in my life will be the one on which I will be able to give my life for you”.

Working in Kosti is beautiful and hard. Serving is always like that. But I am happy, really happy. I have no doubt that I am where God wants me to be.

And the booklet Mbeu Ikagwa? It is still with me, solemnly opened on a small bookrest in the right corner of my desk.
By Fr Brighton Multiply Zimba, Mccj
https://newpeoplemedia.com