South Sudan: “The Kingdom of God grows like a tree, slowly but steadily” 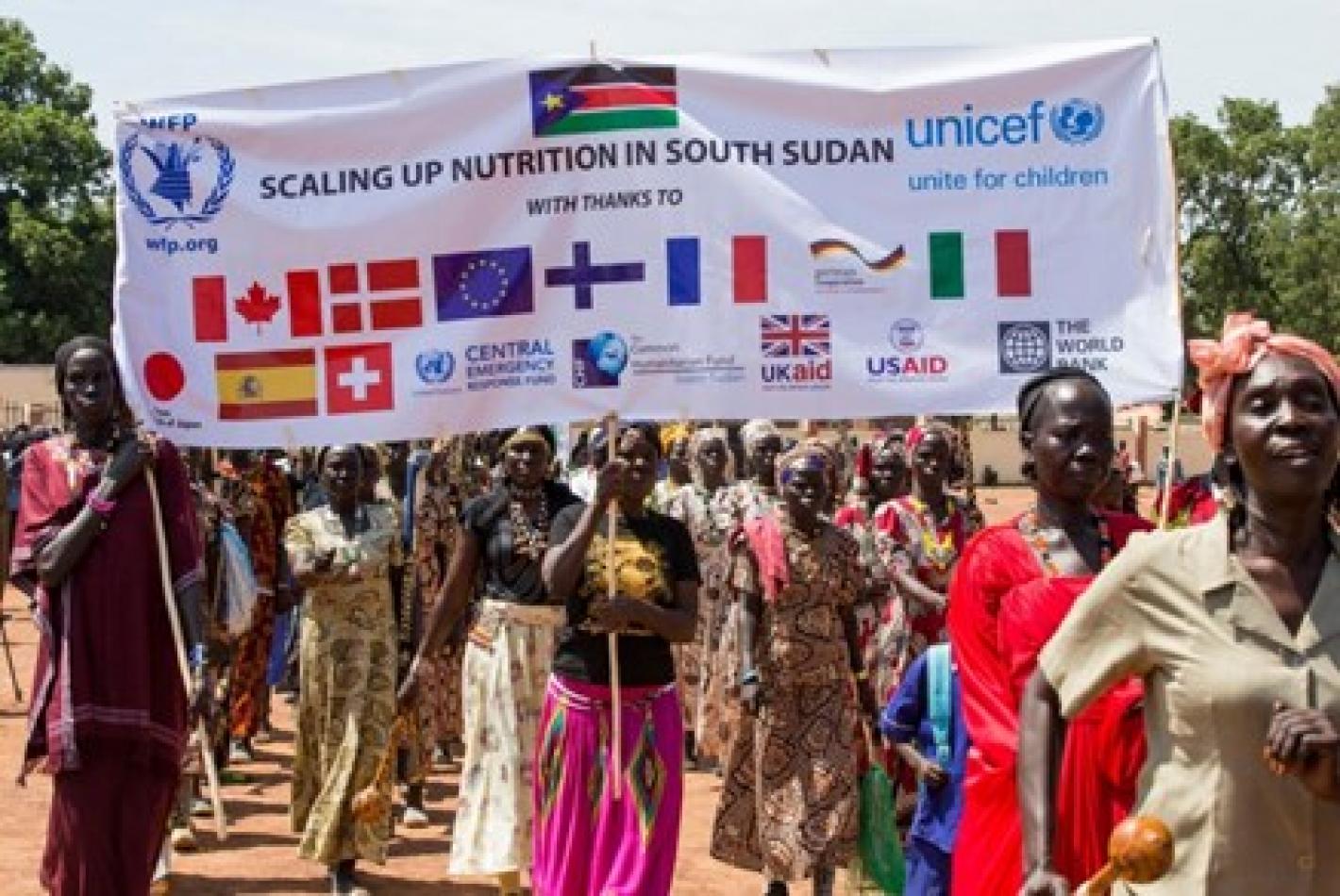 Tuesday, May 21, 2019
Pope Francis endeavored to make great gestures at the peace meeting for South Sudan in the Vatican. But the two counterparts Salva Kiir and Riek Machar have little control of the struggles in the country, knows Comboni missionary Gregor Schmidt.

Interview with the internet-portal of the German Bishop’s Conference

Question: Fr. Schmidt, Pope Francis has invited the two arch rivals, South Sudan's President Salva Kiir and opposition leader Riek Machar, for a spiritual retreat to the Vatican and asked for their commitment to peace. How do you rate the meeting?

Father Gregor Schmidt: The meeting is based on an initiative of the Anglican Archbishop of Canterbury, Justin Welby. The president is Catholic, his rival Protestant. In this deadlocked situation, it is good to remind politicians that they are held accountable by God, and to pray for genuine repentance of the adversaries. I am pleased that the meeting took place in the Vatican, because it underlines how much the Catholic Church cares about a just peace. 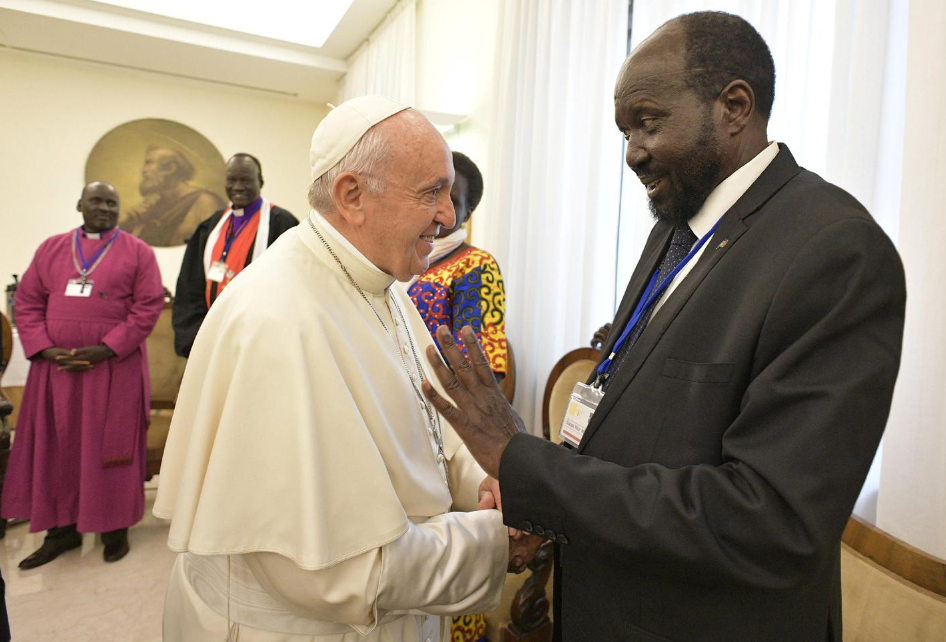 Question: Do you think that the gestures of the Pope, such as the kisses, could trigger a rethinking of the two rulers?

Schmidt: Maybe, but your question implies that the two actually have power to influence the conflict decisively. President Salva Kiir is dependent on his advisers and the Dinka Elders Council (Jing Council). Other Dinkas pull the strings and make sure they control the important positions in the country. The truth about Riek Machar is that he is merely a representative of his Nuer people and does not represent the opposition as a whole. There are countless other opposition groups who do not want to be governed neither by the Dinka nor by the Nuer.

The current peace agreement is based on other agreements that reflect the situation at the beginning of the civil war in 2013 when there was really only one opposition. But after two years, the Nuer were virtually defeated and since then have entrenched themselves in their territory. The government controls the cities in the Nuer area, the rebels the surrounding bushland. When it became clear that this was a stalemate situation, the Dinka government “dedicated” itself to the peoples of the Greater Equatoria Region and drove about one million citizens across the border to Uganda. Observers have documented numerous instances of ethnic cleansing. Overall, the situation in the country is anarchic as almost all pastoralist men in this country have a semi-automatic rifle and there is no orderly command structure as in a regular army, not even on the side of the government.

Another problem is that motives for violence mingle. In addition to acts of war, there is an awful lot of gang violence and crime because of lawlessness, and there is the traditional killing on the occasion of cattle raiding. And sometimes it is not clear whether it is revenge killing for cattle or robbery (gang criminality) or whether the crime is attributable to the civil war.

Salva Kiir and Riek Machar have an interest in their positions for the sake of power. But they have little influence on what actually happens on the ground in the bush. It would be best if both acknowledged their guilt and resigned.

Question: Meanwhile, the president was overthrown in neighboring Sudan. What impact does that have on the peace process in South Sudan?

Schmidt: We need to wait first to see who will govern Sudan in the future. The interests of Sudan in South Sudan are unlikely to change, i.e. that oil continues flowing through the pipeline to Port Sudan. These are important revenues for the North and for this reason the Sudanese Army occupies the oil field in Unity State. The government in Khartoum supports stability in South Sudan, although "stability" does not necessarily mean peace.

However, a new leadership in Sudan will affect millions of South Sudanese who live there permanently or temporarily. For these people, something can change for the better or worse. For the moment, they are tolerated. Khartoum has become a refuge because it is too dangerous or unbearable for many South Sudanese. From my parish, many people have emigrated to the North.

Question: In the civil war in South Sudan, crimes against humanity have taken place, experts speak of ethnic cleansing by the government. Is it possible to prosecute and come to terms with these crimes?

Schmidt: There is no independent jurisdiction and no separation of powers in South Sudan despite a provisional constitution. Therefore, internally, there will be no prosecution of these crimes. Apart from that, state institutions are incompetent and corrupt. They fail in all aspects of civil administration such as education, medical care and infrastructure programs. All these areas have been delegated to the UN, NGOs, churches and Chinese companies. How is the war to be honestly dealt with in a complicated legal process if basic skills are lacking for a functioning administration?

An investigation of the crimes would only be possible through an international tribunal as in the Yugoslav war. For this, however, the UN would have to wage war against the Dinka government, such as NATO in Yugoslavia, and even win the war. This will never happen because no government wants to sacrifice its soldiers in South Sudan. I would also reject such an endeavor. The result, however, is that there will be no prosecution of the terrible crimes.

Question: What do you expect from the Transitional Government, which is scheduled to start work in May?

Schmidt: The transitional government will not start work in May because several steps in the pre-transitional period have not been implemented, e.g. unifying the army under one command and the demilitarization of the capital. In my opinion, this will be difficult.

Another problem with the new agreement is that there are now five vice-presidents to involve as many groups as possible. Political power is like a cake: the more people you invite to eat, the smaller is your own piece. If, in the end, everyone realizes that they have less influence than they demand, dissatisfaction and irreconcilable differences may again cause the Transitional Government to break apart and people to take up arms again. I know from diplomatic circles that all sides are re-arming again in case the political process would fail. Nobody trusts the other.

The current agreement was imposed on the parties to safeguard the interests of Sudan and Uganda. Riek Machar has been warned that Karthum no longer guarantees his personal safety if he does not sign. Salva Kiir realizes that the international community is unwilling to finance emergency help if he does not show serious commitment.

I think the government's maneuver with the peace agreement is a trick to keep the money of the UN and its aid agencies flowing into the country for as long as possible. Hundreds of millions of dollars in aid are being flushed into South Sudan, of which more than half, or even more than two-thirds, are getting lost in the system. Only a small proportion actually benefits people. For example, the central bank sets a bad exchange rate for international organizations, diverting over one-third of the dollars in the pocket of the government. A work visa for foreigners in the humanitarian aid sector can cost up to $ 4,000 a year. The government earns millions of dollars. Unfortunately, the government knows there is a helper syndrome in Western countries, and it knows how to milk the cow.

Question: What can the Church in the country, including the Comboni Missionaries, do in the peace process?

Schmidt: The Catholic Church, along with the other churches of the South Sudan Council of Churches, must continue to proclaim the Gospel, which presents God as the compassionate Father, calling the disciples of Jesus to treat one's neighbor, yes even the enemy, in the same way (Lk 6:27-36). The majority of South Sudanese are Christians. It's about a change of mentality that ethnicity or clan affiliation no longer defines whom you can trust, or whom you should distrust. The Gospel and the Bible clearly spell out what characterizes a just, honest person. This should be the benchmark for building a just society.

Such a mentality change cannot be taught in a workshop, as it is the model of the NGOs, by being flown in, state a few important thoughts through a translator and then fly away again. A peaceful and conciliatory attitude to life must be lived in everyday life. That's the strength of the Church and the missionaries. We live with people and suffer with them. Since the beginning of the war, I have lived in the opposition area. Jesus Christ changed people and converted them by loving them concretely and being the servant of all. We missionaries strive to learn language and culture. This is rewarded by the people, and they are ready to open themselves to the perspective of the Gospel because we have opened ourselves to their perspective. Our active Catholics are noticeably less violent than the average. But it takes patience. Jesus explains that the Kingdom of God grows like a tree, slowly but steadily.

The interview was conducted by Claudia Zeisel, weltkirche.katholisch.de