Anti-trafficking religious sisters received by the Pope. “People should never be bought or sold.” 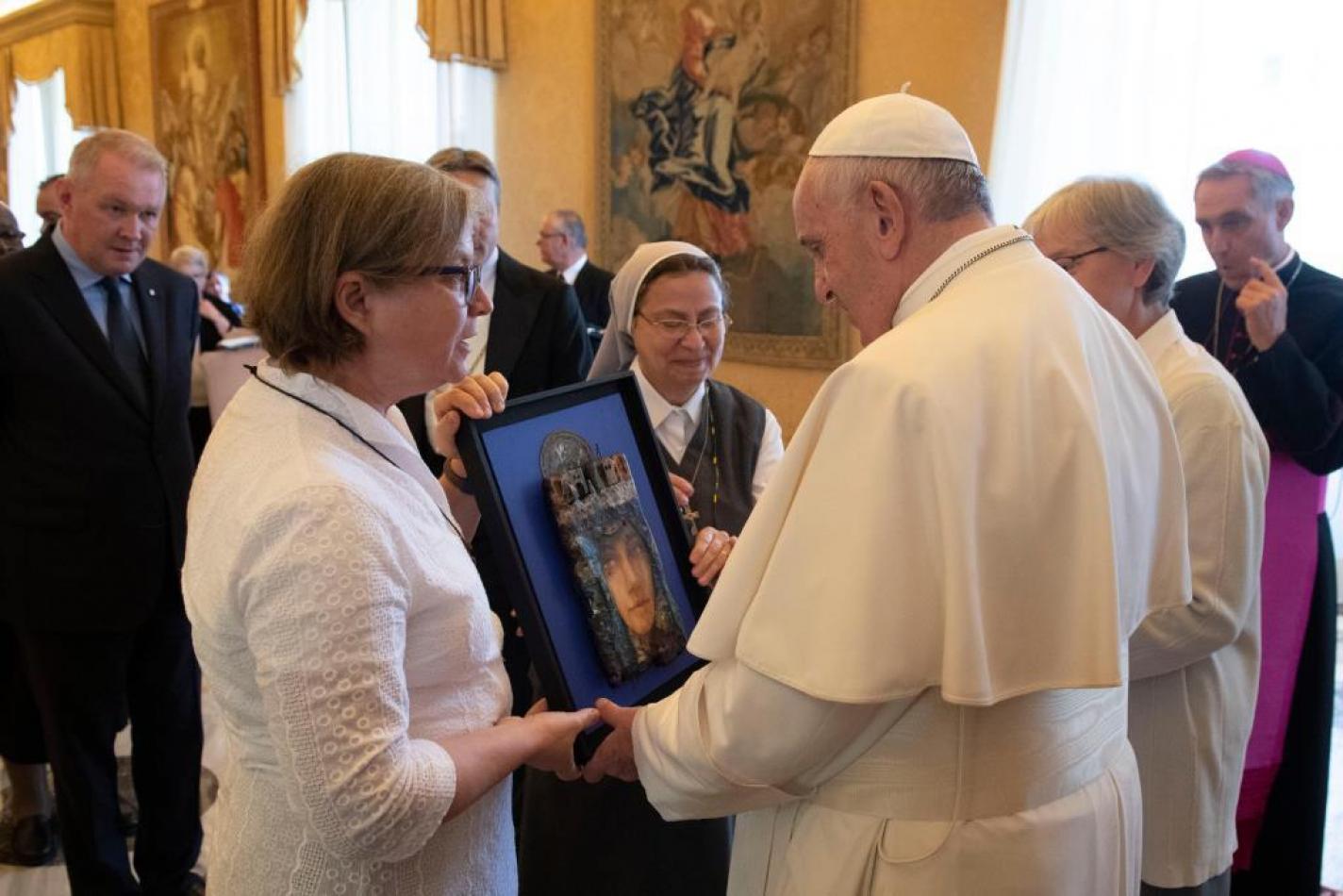 Thursday, September 26, 2019
Pope Francis received in private audience 86 delegates from 48 countries representing Talitha Kum, an international network of women religious against human trafficking, currently in Rome for their general assembly, marking the 10th anniversary of the creation of the global coalition active in 92 countries with 44 national networks throughout the world. Ten nuns from Nigeria, Italy, Thailand, Peru, Canada, United States, Australia, Philippines, India were awarded for their commitment. They are united and determined in the fight against all forms of 21st century slavery, a phenomenon that involves at least 40 million people worldwide, 70% of whom are women and children.

They are called “sisters against human trafficking”, but this definition fails to convey the scope of their delicate and risky commitment that they have been carrying out for the past ten years through the Talitha Kum network, namely to liberate enslaved women, children and. Pope Francis asked to meet them in private audience on the occasion of the general assembly that sees them gathered in Rome September 21 to 27: 86 delegates from 48 Countries, all members of this large network present in 92 Countries with 44 national networks present in the five continents. Ten nuns from Nigeria, Italy, Thailand, Peru, Canada, United States, Australia, Philippines, India were awarded for their commitment. They are united and determined in the fight against all forms of 21st century slavery, a phenomenon that involves at least 40 million people worldwide, 70% of whom are women and children.

The trafficking of spouses in India. Recipients of the Prize include Sister Jyoti Pinto, an Indian nun from Mangalore, member of the Congregation of Sisters of the Little Flower of Bethany, with headquarters in the capital of the State of Karnataka. As leader of her congregation Sister Pinto contributed to the creation and development of Amrat-Talitha kum, which in Sanskrit means “to bring life”. Its members today include 70 congregations and 600 women religious. Sister Jyoti never tires of telephoning, writing, and personally meeting her superiors-general to ask them to join the network. The Indian nuns are confronted with the trafficking of brides, with sexual exploitation and prostitution, with children forced to work in brick factories, construction, with men exploited as cheap labourers in agriculture.

Most of them belong to the poorest castes and tribal groups.

Thousands of women and young girls from the poorest areas of India – such as the eastern States of Orissa, Bihar, Jarkland, West Bengala – are victims of bride-trafficking. “In many villages in the north of the Country, in the States of Punjab and Haryana, there are no women because of a preference of male sons”, said Sister Jyoti. So the girls are lured in other States and trafficked for this purpose.” They are trafficked through legal and illegal agencies that search for the right candidate on behalf of the families, they organize the meeting and ensure marriage celebration. Illegal agencies constantly change their headquarters and phone numbers. Prices range from a few hundred rupees to thousands of dollars, depending on the families’ financial situation. “Young girls are misled into believing that they will marry into a nice family with a good job, they are unaware that they fell prey to trafficking, violence and sexual abuse. Instead of getting married many of them are exploited in domestic servitude. Very wealthy families have four or five young women exploited for domestic service in private households”.

Red Kawsay in Peru, information and awareness. In Quechua, the idiom of the largest ethnic group in Peru the term Kasway indicates the ancestral cosmic vision of life. Thus 39 congregations that form part of the Peruvian network of Talitha kum have decided to name their commitment Red Kawsay – “consecrated life for a society without human trafficking.” Thousands of brochures and flyers featuring the logo were distributed during the last Pan American Games in Lima from July 26 to August 11. On that occasion they launched “Play for Life”: a national campaign to raise awareness on human trafficking.

In fact the demand for sex workers by sport fans and tourists increases during mega sport events. The sisters against human trafficking have set up a toll-free number – 1818 – to report such situations, for “people must neither be bought nor sold”. There were 6,574 complaints between 2010 and 2018, and the number is constantly increasing. 85% of the victims were women and girls, 64% were under 17 years old. Most of them are Peruvian. With time many ex victims became traffickers themselves, thereby easily deceiving the young women and earning their trust. Over the past years there have been higher numbers of young girls from Venezuela, due to massive migration flows from the Country. Sister Maria Isabel Chavez Figueroa, Peruvian, of the Congregation of Our Lady of Charity of the Good Shepherd, has been serving in the “Maria Agustina Rivas” centre since 1994. Here she meets young women exploited for prostitution purposes. She too has received an award for her commitment in the network throughout Latin America. “We are deeply committed in raising public awareness- she told SIR.

Women and men religious are active at local level disseminating valuable information on the phenomenon.

We work on prevention with youths and children.” Many girls and young women in Peru live in conditions of vulnerability, abandonment, poverty and lack of education. “They are contacted in the villages and lured by false promises of a job, brought to large cities or mining centres for prostitution purposes. This happens especially in Madre de Dios and Puerto Maldonado – said sister Maria Isabel -. Young men in the Andean region are exploited for forced labour mining.” Peru adopted a national plan against human trafficking and a set of regulations that could help counter this phenomenon were it not for widespread corruption, machismo and dehumanization. “They don’t understand that people are not commodities – the nun said -. According to the widespread mentality money can buy everything, including a human body.”

Once a victim, a social worker today alongside with other women. “I live with women victims of trafficking every day. The suffering seems endless”, while speaking at the Assembly, Helen broke out into tears: “I experienced these situations myself and I thank God for having been saved.” At the age of 20 a nun from Talitha Kum met her in prison and gave her hope and support. The brothel mistress had reported her on charges of exploitation of prostitution, but in reality she was the victim. She was lured to Italy from Nigeria on the promise of a job and was left on the streets, subjected to physical and psychological violence, forced to repay a huge debt for the journey. Now Helen is happy, she has a husband and two young girls and works as a social worker in a sheltered location in Sicily. She helps other women overcome their situations of slavery. “Sometimes the same families, friends and acquaintances of the victims, convince them to undertake the journey motivated by the belief that they will be working in Europe – she said -. Other parents are aware that their daughters will end up as sexual workers but they only care about the money. The most horrible moments are when the traffickers go to the young girls’ homes and beat up their mothers, set their houses on fire and force the mothers to persuade their daughters to leave.” “When I tell them they should get away from all this, sometimes they hit me”, she said.

“They don’t realize that they are enslaved, even though their life is a nightmare.”

“Every time they speak with their parents over the phone they cry all day long. We must help these young women with all our hearts.”
[Patrizia Caiffa - SIR]