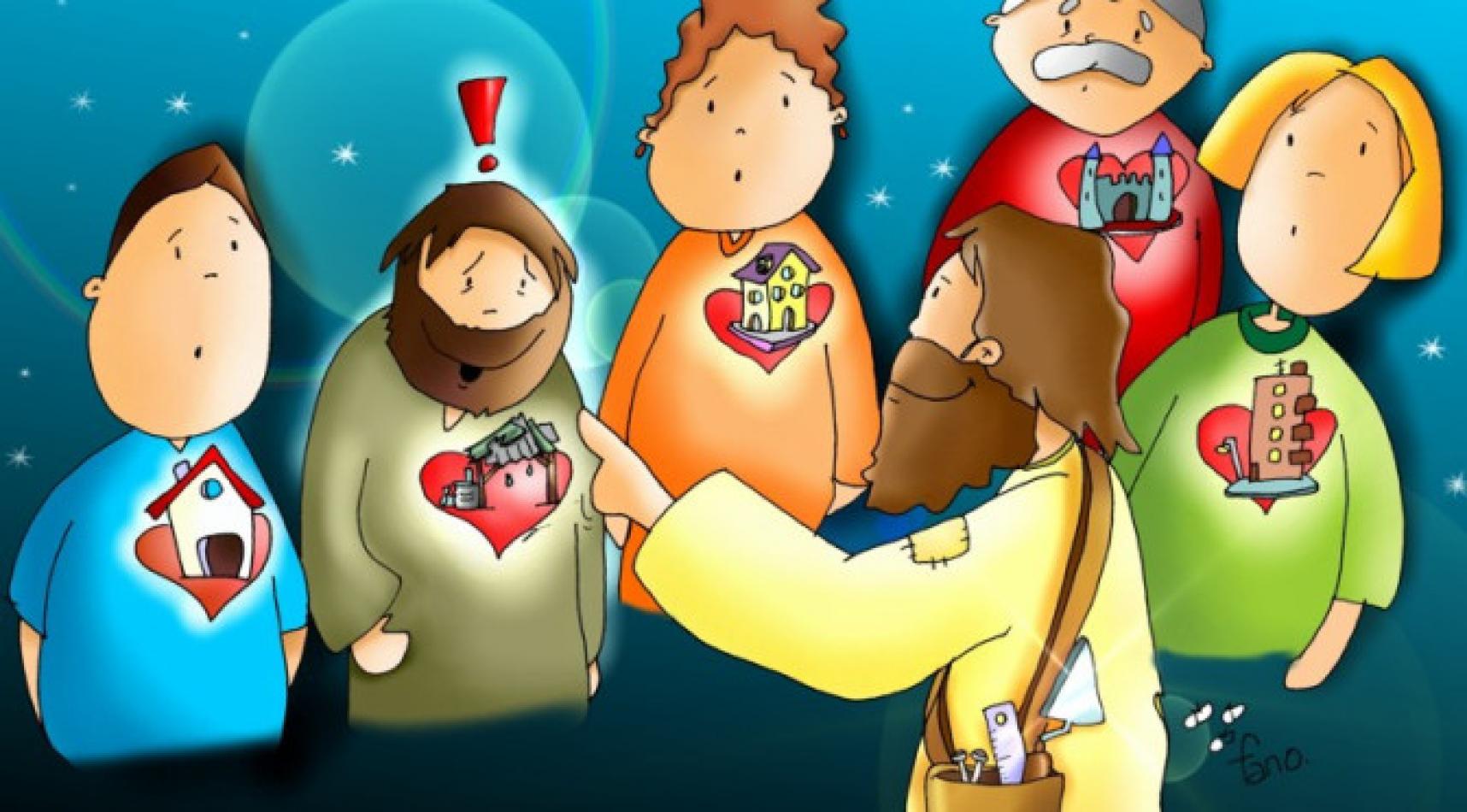 Here is Zacchaeus: the unclean, the sinner, refused by all. He desperately looks for Jesus because he has heard of him. He knows the harsh judgments he delivered on wealth, but he also knows that he is “the friend of publicans and sinners” (Lk 7:34). He was told that he “did not come to call the righteous, but sinners to repentance” (Lk 5:32), and for this, he wants to know who Jesus is.

At the time of Jesus, the common people took only one meal a day, in the evening: it is understandable that the Israelites have imagined the kingdom of God as an eternal dinner where everyone finally would eat to his heart’s content. The prophecy they referred to was uttered by Isaiah: “The Lord will prepare for all peoples a feast of rich food and choice wines, meat full of marrow, fine wine strained” (Is 25:6).

Since then the banquets of this world were a picture of the future world. Gathering righteous and sinners around the same table was considered a blasphemy against the holiness of God who wanted them separated. The exclusion constituted a peremptory call for the wicked to convert. Everyone in Israel shared this belief and that explains the surprise provoked by the behavior of Jesus.

The passage starts presenting the Master who enters Jericho and crosses the city accompanied by the crowd and the disciples (v. 1). At the entrance of the city, he has just cured a blind man who begged him: “Lord, that I may see” (Lk 18:35-43). The combination of these two facts is not random. The healing of the blind man and the “recovery” of Zacchaeus reflect and illuminate each other.

Both the blind man and Zacchaeus want to see Jesus who performs a miracle for them. He reverses their condition deemed unrecoverable. Both stories speak of a crowd that follows the Master, but does not understand, criticizes him and opposes his choices and his saving work.

Both stories finally close recalling the devastating effects—the new vision of the world and of life—produced by the encounter with the light given by Jesus.

In today’s passage, he who tries to see is a rich publican named Zacchaeus.

By a strange twist of fate the name he carries means pure, righteous. The publicans are considered by all—and with reason—thieves and Zacchaeus is not only a tax collector but a chief tax collector. Luke even invents a better word to describe him: he calls him archpublican—a term that does not exist in Greek—like saying an arch thief. Other than pure!

Besides the name, the evangelist notes another detail: he was small in stature. This is not a trivial information on the physique of Zacchaeus. It is the image of how he appears in the eyes of all: an insignificant freak, an annoying black dot in an immaculate society, one of those excluded from the banquet of the kingdom of God.

Zacchaeus is well aware of his condition, but being excluded from the assembly of the just does not embitter him that much. He is convinced that being lumped together with people who scrupulously observe the law, but who are hypocrites, opinionated, self-satisfied with their own righteousness, would not benefit him greatly.

On the one hand, he would like, yes, to distance himself from the group of sinners, among whom he knows to be rightly cataloged, but what would be the alternative? The adhesion to the sect of the Pharisees? He will not find the answer to his torments, to his concerns.

He had everything in life, and yet is deeply dissatisfied. He has participated in many banquets and is still looking for food that satisfies. The need he experiences is so compelling, so irresistible that to satisfy it he is willing to challenge the funny jokes of a crowd that did not sympathize with him.

He wants to see Jesus because—he thinks—maybe he is the only one able to understand his anxieties and inner drama, and he goes up the sycamore tree to see Jesus (v. 3).

It is surprising that he climbed up a sycamore tree. Why didn’t he go up on the terrace of one of the many houses along the main street? Maybe because no one has agreed to host him! Nobody opened a door for him. He was not even allowed to step on the stairs that, from the outside, lead to the terrace.

Here is Zacchaeus: the unclean, the sinner, refused by all. He desperately looks for Jesus because he has heard of him. He knows the harsh judgments he delivered on wealth, but he also knows that he is “the friend of publicans and sinners” (Lk 7:34). He was told that he “did not come to call the righteous, but sinners to repentance” (Lk 5:32), and for this, he wants to know who Jesus is. Even Herod asked: “who is this man?” and he wanted to see him (Lk 9:9), but with a completely different frame of mind: looking for him in a detached way, only to have a clear idea about his identity. Zacchaeus instead is ready to get involved; he longs for a radical change in his life.

In this desperate search, the crowd who accompany Jesus intervene. As it happened with the blind man of Jericho (Lk 18:39) instead of favoring the encounter with the Master the crowd stands in between, becomes an impediment. It does not understand that it is the “small,” “the impure,” the outcasts that Jesus is looking for.

The reason for this attitude is a defect of sight.

In Zacchaeus, even those who follow Jesus can see only the publican, the sinner, the loan shark, no one else. They cannot find in him anything good and positive. They reject him but not being able to physically eliminate him, they isolate, despise and not even say a word to him. This is their way of killing him. Their discriminatory attitude is like that of the Pharisees.

The sight of these “pure” people is so bad that it sees evil everywhere, even where there isn’t: in Jesus. They also criticize and condemn him because—they think—he becomes unclean by staying at a sinner’s house (v. 7). Let us now consider how clean and pure are the eyes of Jesus. When he arrives at the scene, he looks up and says: “Zacchaeus, come down quickly, for today I must stay at your house” (v. 5). None of the crowd has pronounced this name because Zacchaeus is “unclean”. Only Jesus calls “Zacchaeus—pure”! For him he is “pure” and he is also a son of Abraham (v. 9).

From above he sought to see Jesus but now Jesus who, from below, sees him first. In front of the sinner, Jesus always raises his eyes because his position is of the servant, who humbled himself and became obedient unto death, even death on a cross (Phil 2:7-8). Even when left alone with the adulteress, Jesus raises his head towards her (Jn 8:10). He looks at her from below because anyone who loves never judges, lowers himself, chooses the last place, bows in front of the loved one to wash his/her feet.

In Jericho, Jesus is in the midst of the “righteous” who follow him, listening to his word and applaud him. Yet, instinctively, as soon as he sees a “small one”, he immediately diverts his eyes from the group of the “faithful” and directs his attention to the sinner.

He does not care about “social conventions” nor the “holy instructions” issued by the religious leaders. He feels an irrepressible need to be with the one who is isolated and despised. “I must—he says—stay at your house.” I must is for me an inner need: if I’m not with you tonight, I will not be able to sleep.

What have those who looked down on Zacchaeus got? Nothing. With no appeal, their sentences have done nothing but to make him wicked. The stern and grim looks of the censors, judges, prosecutors, only block the unique look that saves, that tender look of Christ.

The story ends with a dinner.

The forward stroke of Zacchaeus (v. 4) and the verbs of motion (to enter, cross, run, climb, descend quickly) that characterize the first part of the story (vv. 1-7) have as their goal the sinner’s house where Jesus is going and “takes abode”(v. 7). With his coming, the feast and the banquet of the kingdom of God begin as announced by Isaiah.

We observe who is inside and who is outside, who celebrates and who is sad. The “righteous” should be inside, instead; they’re all out to murmur, to fret with rage, because they don’t agree with the type of guests Jesus wanted to fill the hall.

The “unclean” for whom Jesus came are inside. There is Zacchaeus, the chief of sinners, the one for whom there was no hope of salvation because he is a publican and rich (v. 2). Jesus himself has just said: “it is easier for a camel to pass through the eye of a needle rather than for a rich man to enter the kingdom of heaven” (Lk 18:25). Yet, “that which is impossible for people becomes possible through God’s intervention” (Lk 18:27).

Salvation did not come automatically: it was offered, yes, free of charge, but Zacchaeus had to welcome her into his home. Only then he finally discovered the true joy that he was desperately looking for.

At this point here that love begets another love: Zacchaeus, freely loved, realizes that there are other people who need love. He remembers the poor. “Lord, he says to Jesus, I give half of my possessions to the poor, and if I have extorted anything from anyone I shall repay four times over” (v. 8).

Unlike what he did with the rich young man (Lk 18:18-23), Jesus did not ask Zacchaeus to “sell everything and to distribute his assets to the poor.” He did not reprimand him nor put any condition. He only asked to be welcomed.

Zacchaeus was not admitted to the banquet of the kingdom because he was good. He became good later, when he involved himself in the party. He was converted when he found out that God loved him even though he was an impure, poor, small, indeed, precisely because he was small.

The discovery of this disinterested love was the light that dispelled the darkness that enveloped his life and made ​​him realized that only love and the gift are a source of joy.