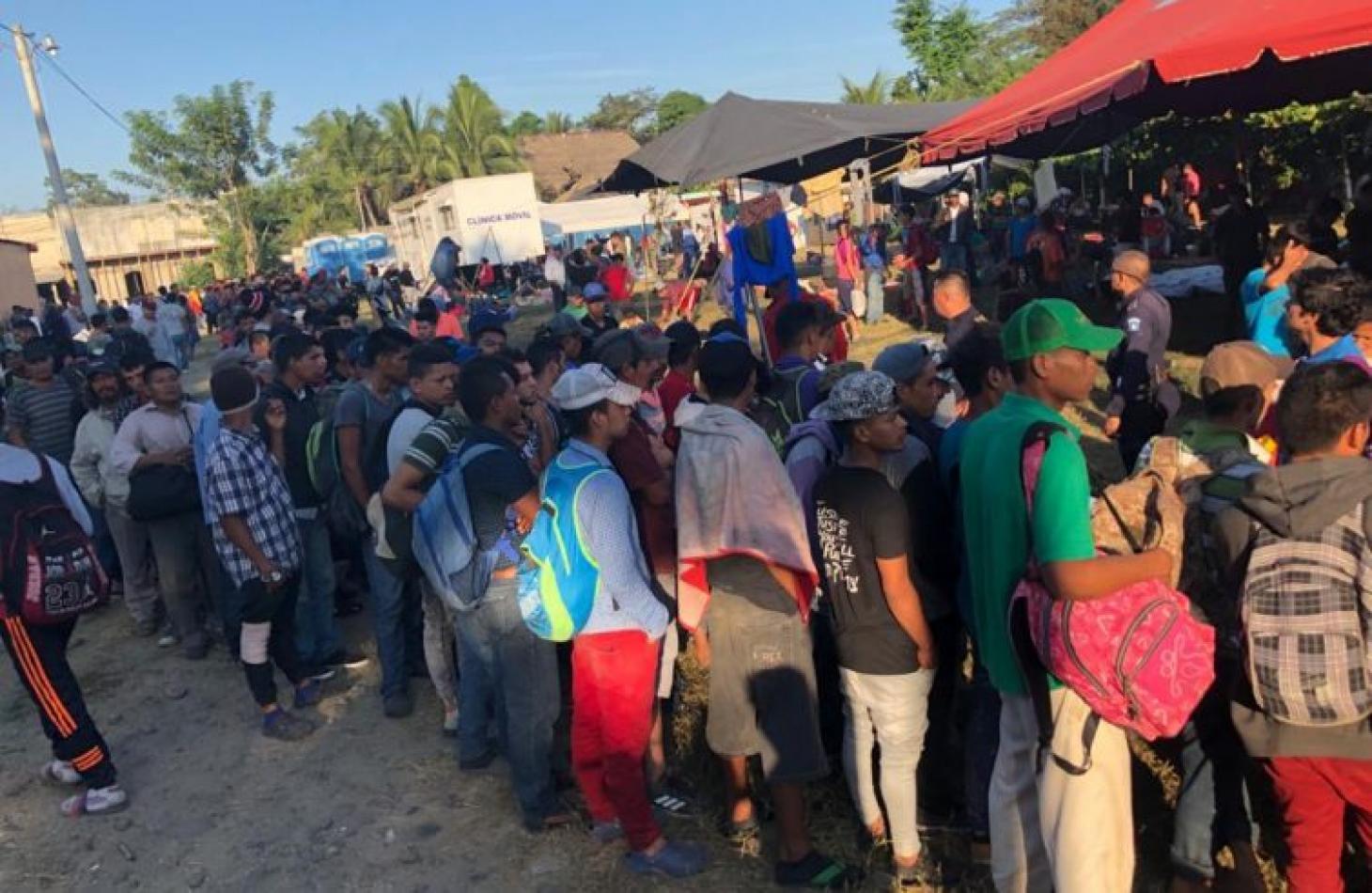 Wednesday, January 22, 2020
More than 4,000 people have already reached the Mexican border, about two thirds are Honduran, the others are from El Salvador, Nicaragua, Cuba in addition to others who joined from Guatemala. Fleeing despair and unsustainable poverty, violence and absence of human rights, they want to reach the United States. [SIR]

Last Wednesday, in San Pedro Sula, northern Honduras, there were approximately three hundred migrants. Now they number more than 4,000. Having crossed Guatemala, they are trying to push their way into Mexico, now denying access to everyone. Entire families as well as single mothers, more than a third are minors and pregnant women, according to a UN Report. Their destination, as always, is the United States. This year’s first migrant caravan has departed, after a few months of virtual standstill. Yesterday was dramatic, on the border between Guatemala and Mexico, on the Rio Suchiate. The Mexican National Guard made excessive use of force and tear gas was used to curb attempts to force the blockade, while many were trying to cross the border through the river.

The era of Central American “caravans” began in the fall of 2018; the first collective exodus, which reached Tijuana, on the Californian border, was followed by a second, and then a third, and then many others. Last year, the US-Mexico agreement had “sealed off” the borders. Trump also signed a deal with Guatemala last summer that he called “a third safe country.” Basically, asylum seekers in the U.S. would have had to wait for a response to their request in the Central American country, as is the case for Mexico, in exchange for aids.

What is happening shows, once again, that the desperation and the unsustainable situation of poverty, violence and lack of human rights, especially in Honduras (also hit by a terrible drought), are stronger than any barrier and any agreement.

About two thirds of people who reached the Mexican border are Honduran, the rest are from El Salvador, Nicaragua, Cuba and others have now joined from Guatemala.

A constant exodus. First-hand accounts and statements provide a reconstruction of the latest developments, starting from Honduras, the main place of departure. Monsignor Luis Solé Fa, bishop of Trujillo, president of the Pastoral Care of Human Mobility of the Honduran Episcopal Conference, told SIR: “Departures from here have never ceased. In fact seen from here, this phenomenon has hardly changed.

The exodus from the Country is uninterrupted.

These caravans are formed for two reasons: on the one hand, those who migrate feel safer, sheltered from dangers, and on the other these groups leave on the initiative of someone who succeeds in gathering his compatriots, often for political reasons.”

Hondurans continue to leave in spite of everything: “Some try to join relatives who succeeded, others are without work and without hope. And yet, how small are the hopes of living their dreams, given the huge number of people deported, forced to return to their country after having tried to enter the U.S. Now also Mexico said that it will deny access”, the bishop pointed out.

Msgr. Solé mentioned, in this regard, the message of the Honduran Church to the population: “We invite everyone to reflect carefully, before embarking on this journey, to determine whether it is inevitable.

It is our view that while there is a right to migrate, there is also the right not to be forced to migrate. Admittedly, here in Honduras many people are forced to migrate,” owing to unemployment, violence, poverty that is also fuelled, the bishop explained, by endemic corruption and the expansion of illegal drug trafficking.

Guatemala under pressure. The caravan’s route leads up to the Guatemalan border. It was the track followed by the last caravan, which split along the borders of Corinth, Puerto Barrios and Agua Caliente, and then reunited in Esquipulas to reach the capital, Guatemala City. Many people made a stop at the House of the Migrant, run by the Scalabrinian Fathers. “We have had to manage a very complex situation, our structure could not cater to the needs of so many people – said the Director of the House, Father Mauro Verzeletti – We gave hospitality to 767 migrants, including 126 women and 151 children. Among them, 729 came from Honduras.”

Mexico closes its doors. A large part of the caravan arrived at the Mexican border over the weekend, scattered across several locations. The majority is in Tecún Umán, the last city before the Suchiate River, that marks the border area with the Mexican state of Chiapas. “We are deeply concerned,” said Father Juan Luis Carbajal, in charge of the Pastoral Care of Human Mobility of Guatemala’s Bishops’ Conference, “4,000 people have already reached the  Mexican border, just to mention those who arrived in Tecún Umán, the last city before Rio Suchiate, in the Department of San Carlos. Others are trying to enter the Mexican State of Tabasco from the Department of Petén. But we’ re told that an additional 4,000 are on their way. Attending to the needs of 8,000 people would be a major humanitarian problem for us. We are currently making a great effort, distributing thousands of meals, thanks to a large number of generous volunteers. The bridge over the river is like a funnel, and virtually nobody crosses it.”

“We are monitoring the situation every day, via a dedicated workgroup,” said Claudia León, Jesuit Refugee Service Coordinator (JRS) in the Mexican city of Tapachula, a few kilometres from the Suchiate River. JRS endorsed a statement issued yesterday by several Mexican humanitarian and human rights organizations, members of the Human Rights Observation and Monitoring Collective of Southeast Mexico: The position of immigration authorities “is unclear” and this “creates tension and uncertainty”, they denounce. “We are recording cases of family separation and we are concerned about the lack of information on the right to international protection when entering the Country. Moreover, the people in the caravans have humanitarian needs that are not being addressed.”

It is the exact scenario that the Bishop of Tapachula, Msgr. Jaime Calderón Calderón, last Friday requested to avoid: “The statements of the Federal Government and the silence of the state Government show that the official position is, as on other occasions, ambiguous and hesitant. Instead, “our face and our disposition are those of the Good Samaritan who helps those who experienced violence in their lives and suffer the hardships of the journey, in an attempt to seek better living conditions for themselves and their families.”
[Bruno Desidera - SIR]