Home
Word for the Mission
Commentaries for Sundays and Feasts (A)
Presentation of the Lord – Year A: February 2

Presentation of the Lord – Year A: February 2 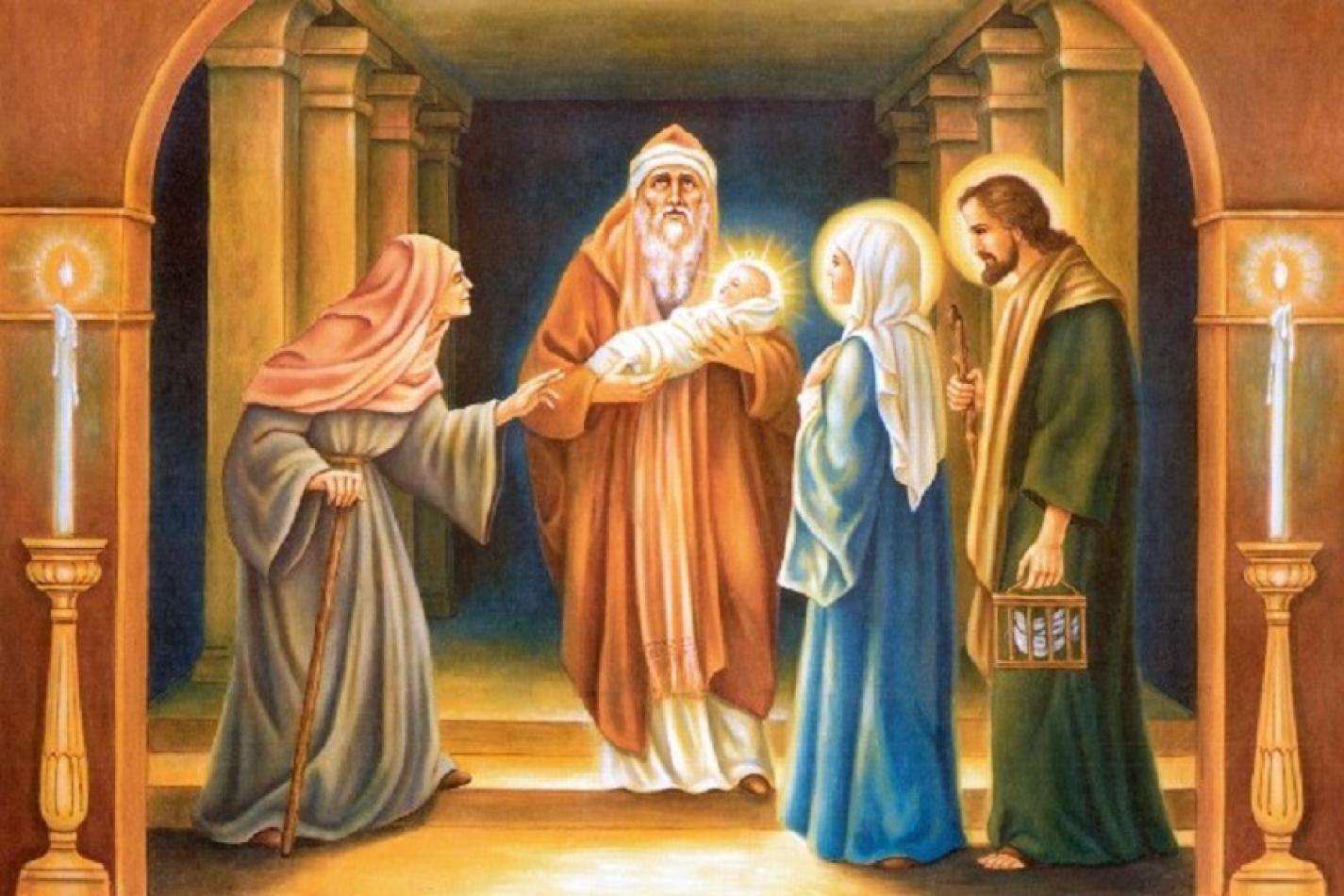 In today’s Gospel, Luke tells of the Lord’s surprising answer to this expectation. His triumphant entrance into the sanctuary, among hosts of angels, stern judge ready to condemn, was expected. Here instead he enters the temple in the most unexpected way: a weak and helpless baby, wrapped in swaddling clothes, supported by the arms of a girl just on her teens, accompanied by the young husband. (...) 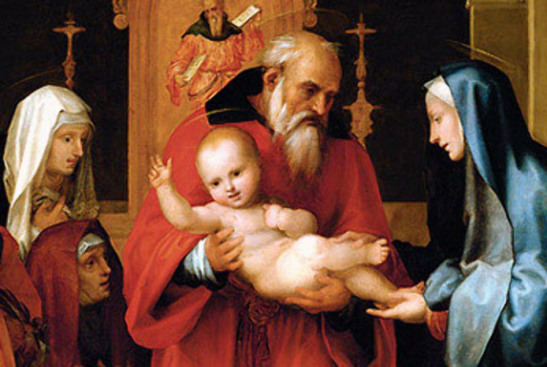 All Were Waiting For Him
Only Anna and Simeon Recognized Him

Israel has jealously guarded and meditated Malachi’s prophecy that we found in the first reading. For centuries, she has called for its fulfillment and has cultivated the certainty that one day God would give a demonstration of his strength against those who did not keep his law.

In today’s Gospel, Luke tells of the Lord’s surprising answer to this expectation. His triumphant entrance into the sanctuary, among hosts of angels, stern judge ready to condemn, was expected. Here instead he enters the temple in the most unexpected way: a weak and helpless baby, wrapped in swaddling clothes, supported by the arms of a girl just on her teens, accompanied by the young husband.

It is difficult to recognize in that child, all equal to the others, “the fire and the lye” sent from Heaven to purify Israel. Only spiritually sensitive people could see in him the “light that enlightens all people.”

In the first part of the passage (vv. 22-24) the episode of Jesus’ Presentation in the Temple is narrated.

The Jewish law prescribed that all the firstborn, both of men and animals, were to be consecrated to the Lord (Ex 13:1-16). Since children could not be sacrificed, they were redeemed with the offering of a clean animal that was sacrificed in their place. Wealthy parents handed to the priests a lamb, the poor a pair of doves or turtledoves.

Mary and Joseph have fulfilled this requirement of the Torah. Luke takes the opportunity to point out that the Nazareth family belonged to the category of the poor. They were not able to offer a lamb.

God’s love for the last ones, the sinners, the impure persons is a theme dear to the evangelist. With a tinge of almost imperceptible language he, from the beginning of his Gospel, places the family of Jesus not only among the poor but also among the unclean.

According to the law of Israel (Lev 12) only the new mother had to submit herself to the purification rituals. Luke speaks instead of “their purification” (v. 22), as if, in solidarity with the sinful humanity, the entire holy family had gone to the temple in search of purification.

Luke wants to point out Jesus to his communities as the model of adherence to the will of the Father from the first moments of his life. This harmony with the designs of God is possible only to those who, like the members of the holy family, have chosen the word of Holy Scripture as a guide to their steps.

Mary and Joseph know that the child they carry in their arms is not theirs: he was entrusted by God to their care but remains God’s. They will guard him with care until the day in which he will inaugurate the extraordinary mission he is destined to. It is a mission not revealed to them and is completely shrouded in mystery.

They take him in the temple and consecrate him to the Lord: they recognize that he is the Lord’s. They will never withhold him for themselves; they will prepare him to deliver him as a gift to the world—in the time appointed by God.

They are a model for all the parents to whom God entrusts his children. These are not creatures on which one folds up with possessive love. They are Heaven’s gift to give to the world. Parents are called to consecrate them to the Lord: to discover the mission which the Heavenly Father has destined them and put them in a position to carry it out.

The second part of the passage (vv. 25-35) is the center of today’s Gospel. The scene takes place in the temple.

The vast esplanade that Herod the Great has just finished building is teeming with pilgrims. They are visiting the holy place to pray, to receive instructions from the rabbis seated on the porch of Solomon, to offer burnt offerings. They are religious and devout people. They seem, therefore, in the ideal spiritual condition to recognize and welcome the expected envoy of the Lord.

Yet when muddled up in the crowd, Joseph and Mary enter the holy place holding the son, no one realizes the extraordinary event that is taking place. No one can imagine that that baby is the light of the world.

Only Simeon, when he notices them, is caught by a sudden shudder, by an uncontrollable emotion. He makes his way among the people, heads towards them. Upon reaching the child, he takes him from the arms of his parents. He raised him up to heaven moved and exclaimed: “Now, O Lord, you can dismiss your servant in peace, for you have fulfilled your word and my eyes have seen your salvation” (vv. 29-30).

Simeon, the godly man who has spent many days of his life in the Lord’s temple pondering the scriptures, how was he able to recognize in the newborn the “light of the people”? What made him different from the other Israelites present in the temple? He was not an old man—as he is customary depicted. Luke describes him thus: “he was upright and devout, waiting for the time when the Lord would comfort Israel” (v. 25) and further on he was a man “led by the Spirit” (v. 27).

These are the interior dispositions that characterize the contemplatives, those who can discern the true reality, those who find themselves beyond the appearances of this world. It’s not enough to be pious and religious to see people and the world with God’s eyes.

Simeon is an exemplary man. Throughout his life he has chosen the Spirit of the Lord as confidant; he has kept alive the certainty that God is faithful to his promises and lived in the light of the Holy Scriptures. For this, he is peaceful and happy. His view extends beyond the narrow horizons of the present time; he contemplates his fate far and asks the Lord to welcome him into his peace.

There are people who, as they advance in years, become sad, sometimes also hard to deal with. Their dissatisfaction often depends on sickness, the decline of forces, but other times it comes from not having spent their lives for lofty ideals and by fear of death. In a last attempt to cling to this world, they even withdraw in themselves, complain if they are not the center of attention, if not all are ready to meet their demands.

Not so Simeon. He does not think of himself but of others, of all humanity, to the joy that people will experience when the kingdom of God will be established.

He does not regret the past. He realizes that evil existing in the world is enormous; he does not cultivate a pessimistic vision of the present and the future. He converses with God and looks forward. He knows that, in a short term, nothing will change. However, he is happy all the same because he was lucky enough to contemplate the dawn of salvation. He rejoices as the farmer who, at the end of the sowing day, already dreams of the heavy rains, and then the bountiful harvest.

He is the symbol of the faithful remnant of Israel who for many centuries has been waiting for the Messiah. He does not limit himself to welcoming Jesus in his arms but takes him to offer Jesus to the world, to present him to everyone as “the light.” He understood that the Messiah does not belong only to his people, but was sent to bring salvation to all nations, to be the light of all the nations (vv. 30-32).

Simeon makes a second prophecy, this time, directed to Mary: Jesus will become a sign of contradiction (vv. 34-35).

The image of the sword that will pierce the soul was sometimes interpreted as the announcement of Mary’s sorrow at the foot of the cross. That is not so. The mother of Jesus is understood here as a symbol of all the people. In the Bible, Israel is pictured as a mother-woman who will give the world the Savior.

Who, better than Mary, could portray this mother-Israel? It is to Israel that Simeon—sensing the drama that awaits him—turns. He announces the appearance of a deep, inevitable tear within her. In front of the Messiah sent from Heaven, some Israelite open the mind and heart to salvation, many others will close themselves in denial and so decreed their destruction.

In the third part (vv. 36-38) Luke introduces Anna, the elderly prophetess who recognized the Lord in the child considered by all a common newborn. Who gave her this spiritual sensitivity? From where does this piercing look come from?

Anna—the evangelist explains—was a woman intimately united to the Lord. All her life she thought only of him: “She had been continually about the temple serving God as a widow night and day in fasting and prayer” (v. 37).

She was eighty-four years old and this number—which is equivalent to 7×12—has a symbolic meaning: 7 indicates perfection, 12 the people of Israel. Anna is the holy people that come to full maturity, delivering the awaited Savior to the world.

She belonged to the tribe of Asher, the smallest and most insignificant of the tribes of Israel. Luke notes this decisively marginal detail because he is the evangelist of the poor, of the last ones. He wants that the Christians of his community be convinced that they are the best prepared to recognize Jesus as the savior.

Anna had remained faithful to her husband to the point of not remarrying. Her choice has a theological significance for the evangelist. Like Simeon, Anna represents the faithful Israel. In her life, the bride-Israel has had only one love. Then she lived in the mourning of widowhood until the day when, in Jesus, she recognized her husband, the Lord. Then she again rejoiced, like the bride who finds her only love.

Anna did not depart from the temple because it was the home of “her husband.” They do not need other gods; those who live in intimacy with the Lord do not look for lovers. Like Anna and like all lovers, they do not speak of the loved one.

The passage ends (vv. 39-40) with the return of the Holy Family to Nazareth and with the notation concerning the growth of Jesus. He was not different from the other children of his village in any way except for the fact that he increased in wisdom, age, and in divine and human favor.