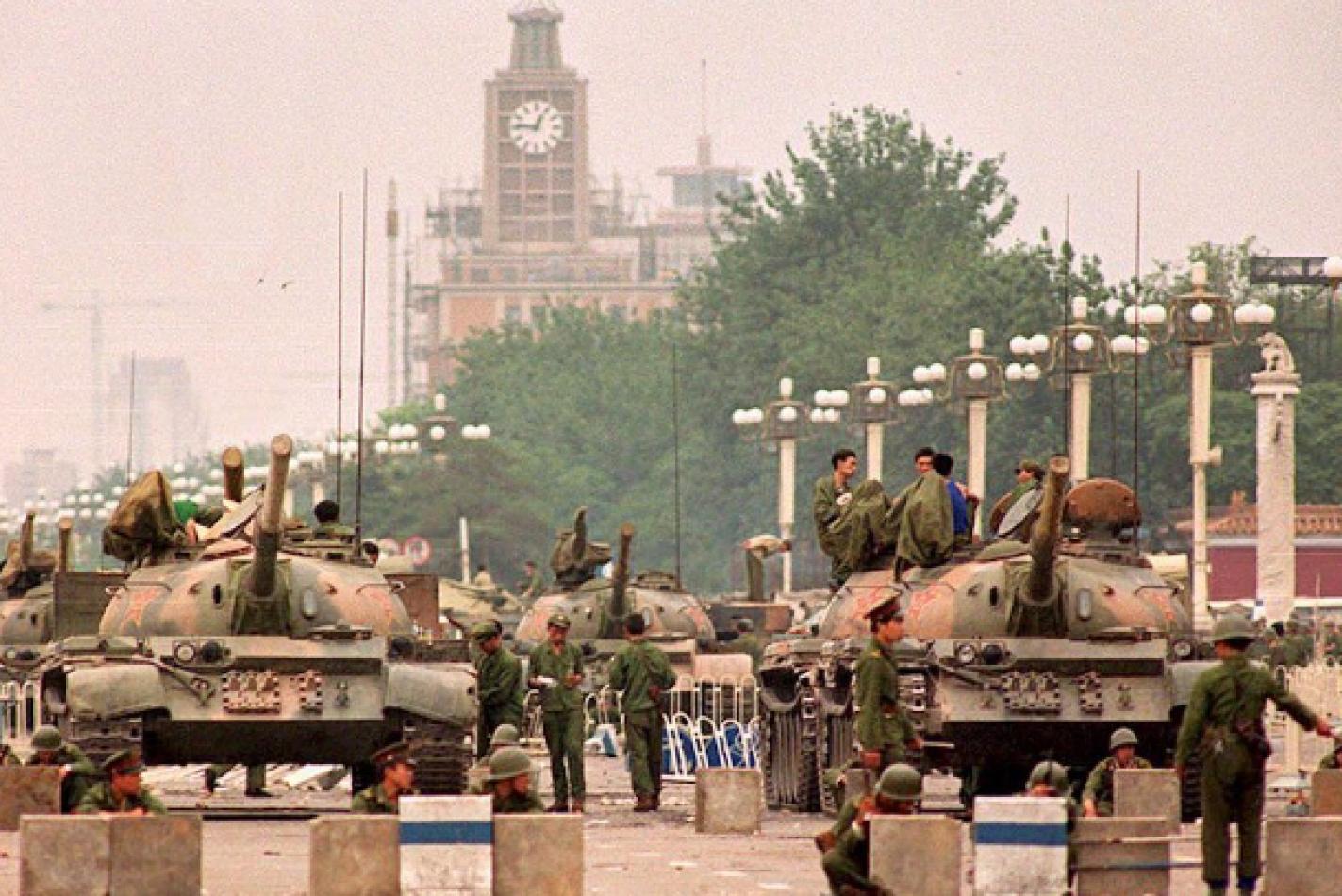 Friday, June 5, 2020
Prospects are uncertain even for the Church, its institutions and its most outspoken leaders. In the picture: Chinese soldiers relax on their tanks after brutally suppressing a student demonstration in Beijing's Tiananmen Square in June 1989. (Photo: AFP). Father Gianni Criveller – UCA News]

Wonderful people of Hong Kong, as I write these lines on June 4, our Christian brothers and sisters gather in Hong Kong churches to commemorate Beijing’s students and citizens killed 31 years ago. Joseph Ha, the auxiliary bishop of Hong Kong, led one of the vigils from the Church of the Holy Cross, the location of the Justice and Peace Commission, one of the Catholic bodies most politically exposed and at risk in the coming months.

For the first time in 30 years, the vigil in commemoration of the victims of the 1989 Tiananmen Square massacre was prohibited. The organizers of the vigil, Lee Cheuk-yan and Albert Ho, have been arrested. Temporarily released on bail, they will go to trial on June 15.

The vigil was officially canceled due to coronavirus restrictions. Victoria Park was closed, not even allowing small groups of people to enter and demonstrating the political nature of the cancellation. However, many people managed to enter the park peacefully. Many others displayed burning candles. Other gatherings were held in different locations of the city or online.

For 30 years, Hong Kong was the only city in the world where Tiananmen was collectively remembered. Many faithful from Catholic parishes and associations, with their parish priests and missionaries, have always joined it. The largest number of people in attendance was reached in 2009 and last year, respectively, on the 20th and 30th anniversaries.

On June 9, 2019, a few days after last year's commemoration, the democracy uprising in Hong Kong began.

In Hong Kong there is anxiety and concern. We are in a suspended time. The future is uncertain, and it will not be good. Beijing has given a fast track to a national security law. It is feared that it might come into force even by the end of the month. As has been written and said by many, it will be the end of Hong Kong as we have known it.

Of course, each law counts less than the interpretation and the ways in which it is applied. Yet, quite clearly, Beijing authorities have decided not to listen to the people of Hong Kong, not to keep the promises given to them, and even to take away from Hong Kong people what they already have. The prospects are uncertain even for the Church, for its most outspoken leaders and institutions, and for the missionaries themselves.

Perhaps, as some affirm, protesters and pan-democrats also have some responsibilities. Perhaps they could accept compromises that had been put on the table in the past. And the violence of some demonstrators cannot be excused.

I do not rule out that pan-democrats could have made political errors. However, I do not see how strategic errors in the context of a political dispute can justify the suppression of citizens' freedoms. Hong Kong has proven to be a civil society of the highest quality, pluralistic and free. Hong Kong can very much stand out in the international context with great dignity. The people of Hong Kong deserve respect and recognition.

It is true that some demonstrations in the last year had terrible episodes of violence and vandalism, including violence by some police agents and by possible mafia and political infiltrators. But there are minor groups of protesters that have taken the path of violence — perhaps out of desperation, perhaps out of youthful political incompetence, perhaps because they are simply and inexcusably violent.

I have written it many times: violence must always be condemned; it is not justifiable, and politically it is counterproductive. Violence puts on a silver platter the justification for the opponents of democracy and freedom to suppress a popular and peaceful movement.

We have translated fundamental texts of non-violence into Chinese and distributed them among our friends, the Church and the people of Hong Kong: You shall not kill by Primo Mazzolari and Obedience is no longer a virtue by Lorenzo Milani.

It must be remembered that for decades Hong Kong has seen the most peaceful and educated political demonstrations of the entire planet. Not even a paper was left on the floor. We were there, we saw them with our own eyes. The demands for the introduction of true democracy were in line with the Basic Law, the Hong Kong mini-constitution, and with the promises and assurances offered to the people of Hong Kong in the years prior to the handover to China in 1997. It is a grave responsibility not to have listened to the peaceful voice of the people.

A final consideration concerns the request for help to American President Donald Trump. I am disappointed by this initiative. Trump is not a leader worthy of representing a people's democratic struggle (just consider his responsibility for the American riots these days). It is not fair to bring the Hong Kong issue into the struggle for world supremacy between China and the United States. Hong Kong can only lose if it is a pawn in the complicated chessboard of the clash between the two superpowers.

Hong Kong is Hong Kong. It has its own history and dignity. It is good that the most significant bodies of the international community support the request that comes from an entire cosmopolitan city. I hope that the European Union, the UN, the Holy See and the British government will provide their support. The latter in 1984 signed the historical international agreement that marked the peaceful return of Hong Kong to Chinese sovereignty.

Hong Kong is a wonderful and beloved city. Not only does it have beautiful natural landscapes and the world’s most elegant postmodern architecture and skyline. Even more beautiful are the people of Hong Kong, its resilience and dignity. Do not let Hong Kong's hope die.
[Father Gianni Criveller – UCA News]

Father Gianni Criveller of the Pontifical Institute for Foreign Missions is dean of studies and a teacher at PIME International Missionary School of Theology in Milan, Italy. He taught in Greater China for 27 years and is a lecturer in mission theology and the history of Christianity in China at the Holy Spirit Seminary College of Philosophy and Theology in Hong Kong.

The opinions expressed in this article are those of the author and do not necessarily reflect the official editorial position of UCA News.