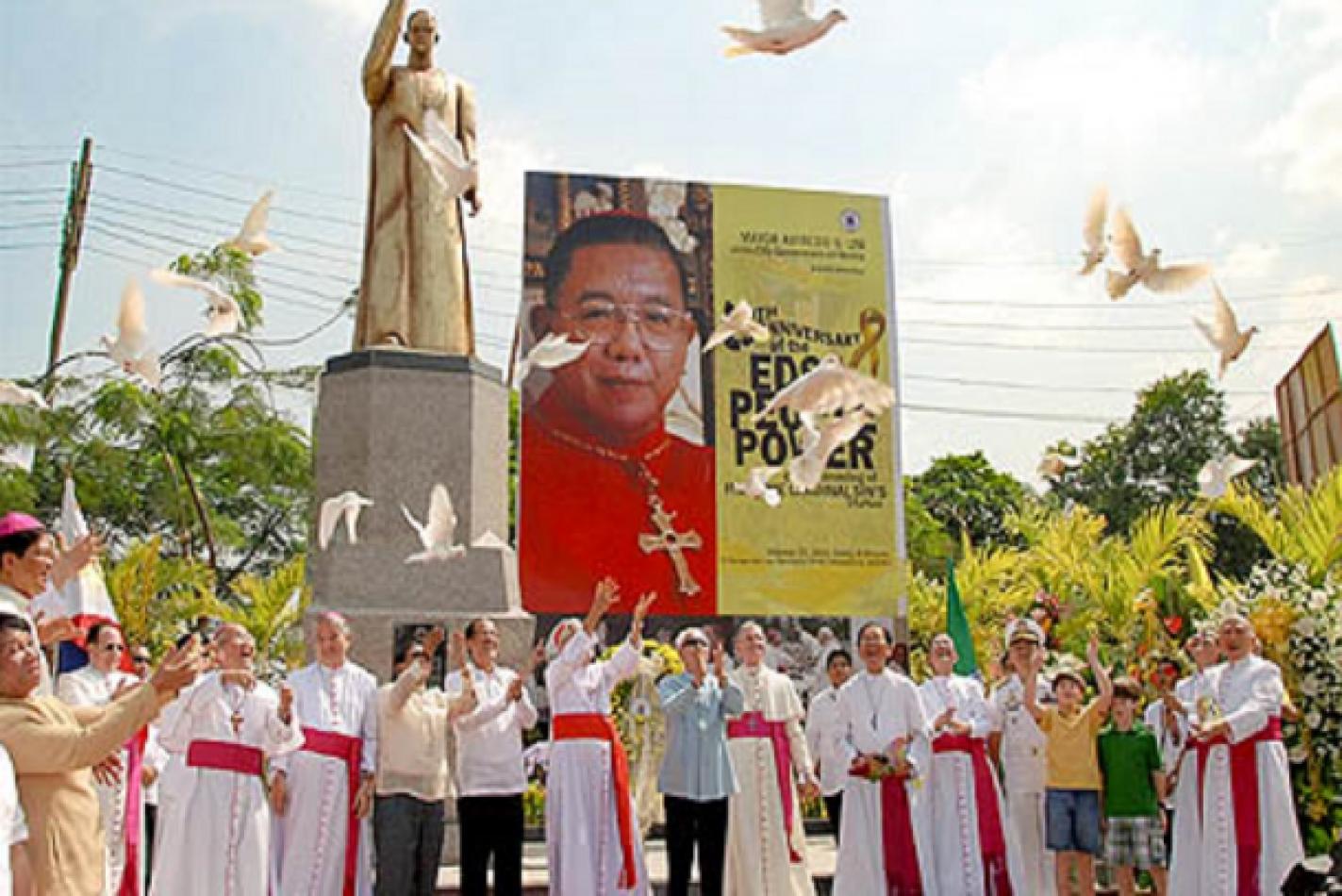 Monday, June 22, 2020
Filipinos encouraged to take heart from late prelate's courage on 15th anniversary of his death. [UCA News, text and photo: Church leaders witness the unveiling of a statue of Cardinal Jaime Sin, the late archbishop of Manila, on Feb. 25, 2011].

A prelate in the northern Philippines has commemorated the 15th death anniversary of the late Manila archbishop Cardinal Jaime Sin, who died on June 21, 2005, by praising his fighting spirit against oppression.

The Philippines needed “fearless prophets” like Cardinal Sin who proclaimed the Gospel even if it meant being persecuted for fighting for truth and justice, Archbishop Socrates Villegas of Lingayen-Dagupan said at a Mass on June 21.

In 1986, Cardinal Sin called on Filipino Catholics to gather along Epifanio delos Santos Avenue (EDSA) — the major thoroughfare running through Manila — in protest against the corruption, cronyism and oppression of then strongman Ferdinand E. Marcos and his allies.

President Marcos ruled the Philippines with an iron fist after declaring martial law in 1972.  What followed during what many described as his “reign of terror” was more than 20 years of human rights violations against opponents, including enforced disappearances, detention without trial and murder.

In August 1983, Marcos’ chief critic and lawmaker, Benigno “Ninoy” Aquino Jr., was assassinated at the airport upon returning from exile to Manila to challenge Marcos in national elections.

Cardinal Sin spoke out against the assassination and called on millions of Filipinos to oppose Marcos’ rule. His calls resulted in the 1986 EDSA People Power Revolution that led to Marcos fleeing with his family to Hawaii. The cardinal called on the people to show their discontent again in 2001 when former Philippine president Joseph Estrada was toppled amid corruption allegations.

Father Jun Sescon, Cardinal Sin’s former private secretary, said the highest tribute to the dead is not grief but gratitude. “This June 21, we observe the 15th death anniversary of Jaime Cardinal Sin, the 30th archbishop of Manila. At a time when we need to be courageous, patriotic and holy shepherds to battle the forces of darkness and evil, this commemoration is a good reminder and opportunity for us,” Sescon said on social media. Sescon also said that his prayer was to remember the late cardinal and that the Holy Spirit may inspire Filipinos to link love of God and love of country.
[Joseph Peter Calleja, Manila – UCA News]