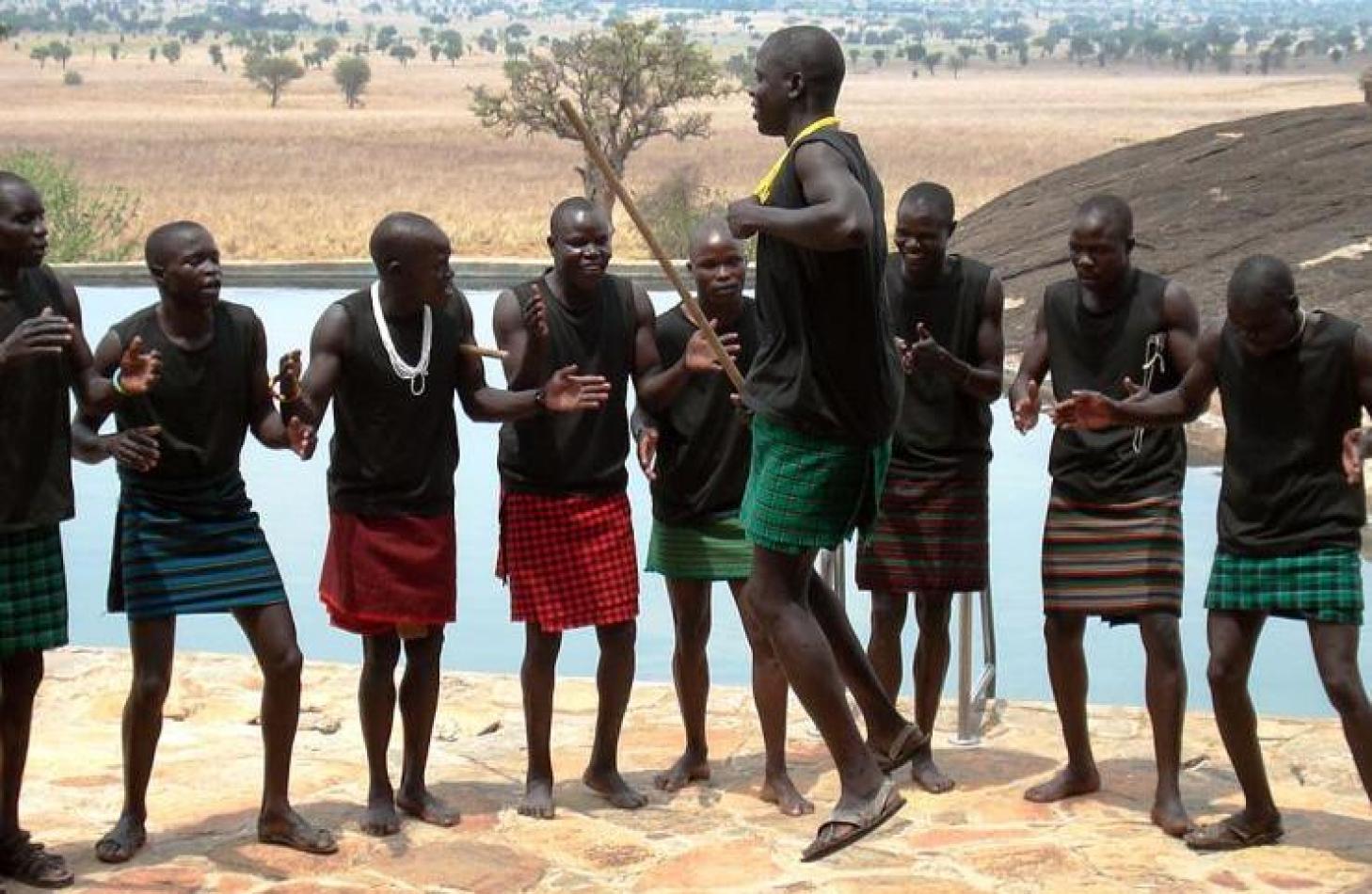 Tuesday, March 9, 2021
For the Karimojong, a pastoral and semi-nomadic tribe living in the north-eastern regions of Uganda, dancing is part of life. An artistic expression to be found in the various situations and events of the community. [
Comboni Missionaries]

Loud hand-clapping in time with the singing sustains the dance. A young man and woman enter the circle as they move, looking at each other and coming close but never touching. Rhythmically, they try to jump as high as they can. This is the art of the dance!

The Karimojong often dance, both in the villages and the temporary enclosures (nawi) they build when they take their flocks to pasture. They also dance in all circumstances, whether joyful or sad. All they need is a piece of clean, level ground; singing and clapping are used instead of the various musical instruments. Karimojong dancing has a natural simplicity and, at the same time, has an artistic quality.

When a suitable place is found, the young people take their places according to a plan that has stood the test of time. The men occupy two thirds of the perimeter of the dancing area, leaning slightly forward with their ever-present batons (ebela) under their arms, loudly clapping their hands in time with the singing, and thus directing and sustaining the dance. The rest of the perimeter is occupied by the girls who, one or more, enter the circle and compete ‘artistically’ with one of the youths.

The two dancers, now leading the dance, perform their dancing without touching, trying to jump as high as possible. When, usually after two or three minutes, their performance ends, the girl thanks her partner with a gracious curtsy and smiling they move aside, giving way to another couple. The circle will not be left empty for long. Another young man will immediately dash into the centre of the group intoning his song and starting to leap as high as he can into the air; he is immediately joined and imitated by another girl.

Each young man who enters the circle to start a new dance intones his song with which he sings the praises of his favourite ox, and his girl, recalls some important event or lists the characteristics of his totem. In fact, at every singing festival of any standing, a real poetry and music repertoire is performed, following a traditional model. In the world of the Karimojong, the words and melodies of all these sung performances constitute a rich cultural heritage.

Dancing is not confined to any particular time. The Karimojong will dance at any time of the year. However, when the community is busy cultivating the fields, they take a break from dancing. They will abundantly make up for lost time after the harvest (adaun akilem), towards mid-September. That is when they begin the new ‘lyrical dancing season’, akiwalakin edonga. The ‘great dance’ that will last from evening until dawn the following day. It is also the time, between one dance and another, for arranging one’s matrimony.

During this special season, the dances are held without interruption, in one village after another, preferably in the evening. The young men spend entire nights at them and prepare themselves carefully, showing off the most beautiful hairstyles and ornaments. Their bodies, smeared with butter, emanate a fascinating ebony colour.

The group organising the dance goes around informing, first of all, the people of the area. On the morning before the dance, the girls grind the durra necessary to make the polenta they will serve to the young men and guests from nearby villages. Those invited, their heads decorated with large coloured feathers, start to arrive around four in the afternoon, starting the dance. The girls show off all their ornamental beads and, intentionally and gracefully, shake and flap the goatskins they are wearing. The young men use all their physical prowess to show themselves off as they perform the acrobatic jumps required by the rules of the dance.

Towards sunset, some of the girls leave the group and return to the villages to see to the proper preparation of the polenta. The others remain at the dancing area. It is not unusual, however, for the mothers to take the place of their daughters in preparing the polenta that is cooked in a pot containing water and milk. When it is ready, it is put into gourds (ngadere-kai) and seasoned with butter and roast cucumber seeds (ngkolil).

The girls from one of the villages pour the polenta into one or more basins (nga-tubae) and season it once more. They then take it to the meeting place where, towards ten in the evening, at their invitation, the young men suspend the dance and take their places to consume the meal. The basins of polenta are placed in front of the dancing area; the girls sit on one side and the young men on the other, happily dipping into the same food. The young men and women of the place — the organisers – do not eat but see to it that all goes well. Once the meal is over and the vessels removed, the gathering of young people meets for a brief ceremony of a socio-sacral character: the inaugural invocation of wellbeing for all, especially the young girls.

The speeches are followed by a special dance, the akimomwor and then the general dancing is resumed with greater enthusiasm and vigour, until morning. The celebration of the akiwalakin edonga is attended almost exclusively by the young men and grown-up girls. The young men use the occasion to seek out a future spouse. Towards evening, while the dancing is going on as usual, a young man may courteously take the hand of a girl, call her to one side and greet her (akiting). The Karimojong say: “Erai inges akimal, erai inges akiting apese”, (it is just to greet her and ask her to be his fiancée). In fact, the behaviour of the couple is limited to the exchange of a few words. If they find each other likeable, they will follow the matter up later on, not that evening.

In the morning, the girls of the area return to the villages to grind some more durra and prepare a second meal for those present. The girls who are guests, instead, stay in the dancing area and continue dancing. When the polenta is ready, the dancers are invited to enter a cattle compound (atamanawi) in the nearest village. The meal is consumed and followed by another ritual dance. At this point something surprising happens. Without warning, the girls who prepared the polenta stand close together and block the exit of the compound, preventing anyone from leaving.

Then the young men are forced to push the girls out of the way to open a way out. In the chaos that follows, the girls try their best to gain possession of a pledge of some sort: a feather, a sandal or any item belonging to the young men. If the young man from whom the pledge is taken is poor, he will not return to ask for it back. If, instead, he is rich, having many cattle, he returns to the girl and asks for the pledge.

The girl will do so only after being promised something, often an animal. After a few days, the young man returns to her bringing the promised animal, killing it with his own spear. The meat of the animal is eaten only by the elders and the young men. The invited dancers, having left the cattle compound, no longer mix with the young men of the place. They again dance and then leave for their respective villages. The others continue dancing until late. At sunset, the girls collect the remaining polenta in a single vessel, season it again and take it to the elders. This polenta is called napuwa, the dust, in memory of the dust raised by the dancing. This marks the close of the akiwalakin edonga.
(A.P. - Comboni Missionaries)