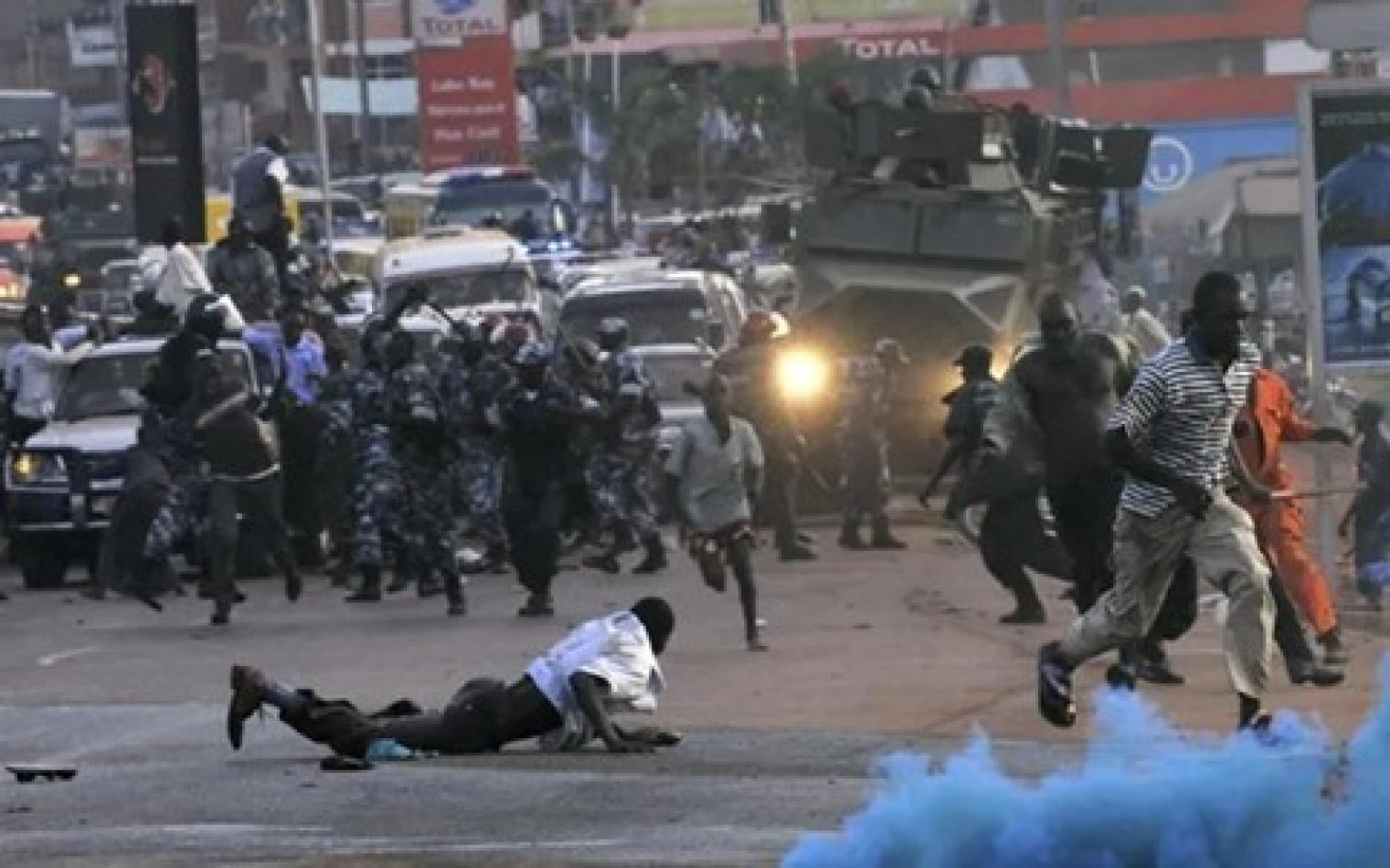 Friday, April 30, 2021
COVID-19 lockdown in Uganda came with torture, sexual violence, unfair arrests, and deaths in police custody among other serious violations of human rights, a recent investigation by the Justice and Peace Commissions (JPC) of the Catholic Archdiocese of Gulu and Lira Diocese in the East African country has established. [In the picture: Past demonstrations on the streets in Uganda/Credit: Public domain. Text:
ACI Africa]

In a report shared by the Denis Hurley Peace Institute (DHPI), which commissioned the study across the two regions, there is a call for action against the perpetrators of the crimes that have been linked to those in authority. A majority of respondents in the study described the human rights situation during the COVID-19 lockdown in both episcopal sees of Gulu and Lira as “worse”.

“Tortures, cruel inhuman or degrading treatment, sexual violence, excessive use of force and food shortage characterized the most human rights violations that occurred during COVID-19 lockdown,” the report shared with ACI Africa Tuesday, April 20 reads in part. The report also details death in custody, denial access to information regarding COVID-19, inadequate access to health and protective health materials and unemployment as additional vices that civilians experienced during the pandemic. In their joint report, JPC officials note that neither civil society organizations nor government officials responded to the human rights violation incidents during COVID-19 lockdown in the areas covered by the two episcopal sees.

In Gulu Archdiocese, rapid assessment was done in various sub counties of Omoro and Agago districts while in Lira Diocese, the assessment was done in the Catholic Parishes of Aduku, Ngetta and Aber. The Church commission in Gulu Archdiocese reached out to 116 respondents, including 95 male respondents and 21 female respondents while in Lira, 83 respondents including 60 male and 18 female respondents were involved in the study. Sharing the new report with ACI Africa, Johan Viljoen, the DHPI Director said that when COVID-19 lockdowns were imposed between March and April last year, the institute of the Southern African Catholic Bishops Conference (SACBC) received reports of various abuses across various African countries.

“We received reports from many of our partner organizations of COVID-19 lockdowns being used by governments to implement repression and commit human rights violations,” Mr. Viljoen told ACI Africa. He added, “Our partner organization, the Archdiocese of Gulu Justice and Peace Commission, conducted research, supported by Denis Hurley Peace Institute, to determine the extent to which COVID-19 lockdowns were used by the state to commit human rights violations in Uganda. The research was conducted in Gulu and Lira Dioceses.”

The JPC officials say that the study will be helpful in guiding civil society groups as well as those at the helm of Church leadership in Uganda in their advocacy activities. “This report shall be used for advocacy purposes for the Uganda Episcopal Conference (UEC) and other human rights like-minded international civil society organizations who may be our partners or not,” they said.

In Lira Diocese, people who were most hit by COVID-19 lockdown were those who did not go past their primary school. A majority of these, the report notes, are casual workers whose jobs were hit hard by the COVID-19 lockdown. The second category is made up of those who stopped at secondary level followed by those who attained vocational or post-secondary studies. The least affected are those who have gone up to university. “This means that the casual workers are the most hit category of people during COVID-19 lock down in Lira diocese,” the report details in part.

The Church officials in the report seek to shed a light on the “cruel, inhuman and degrading treatment,” which they say is mostly perpetrated by the security personnel during COVID-19 lockdown. Other atrocities include sexual violence against young girls and women, also committed by the security personnel, the report says. Sexual violence was also committed by hostile category of human persons such as street kids and men, according to the report. There has also been a reported excessive use of force by the police and military when implementing curfew hours, the report states.

“Many people interviewed reported that Uganda Police force and Uganda people defense beat and arrest civilians during COVID-19. Lockdown,” the JPC officials say in the report, adding that access to health care and protective material like face mask and sanitizers during COVID-19 lockdown was so limited by the local people in the community since many of them were not aware of COVID-19 pandemic.

The report also highlights inadequate food supply to the local population among the inequalities that were experienced during the COVID-19 lockdown. “Most of the shops were locked up and small businesses were stopped hence the unemployment of the majority of people,” the report details, adding that unemployment especially among the rural dwellers who earn their living through doing some small business was also experienced.

“The government of Uganda must provide reliable and adequate health information to all concerning COVID-19,” the officials say, and further call on the civil society organizations in the East African country to form a joint advocacy group that addresses the plight of the vulnerable people. They add, “Uganda police and Uganda people’s defense force should embark on training their officers on human rights and the rule of law. Religious leaders should also team up to advocate for the plight of the community members.”

Civil society organizations, the report recommends, should also participate by conducting more of the fact findings regarding human rights violations or abuses in regards to COVID 19 lockdown.
[By Agnes Aineah – ACI Africa]