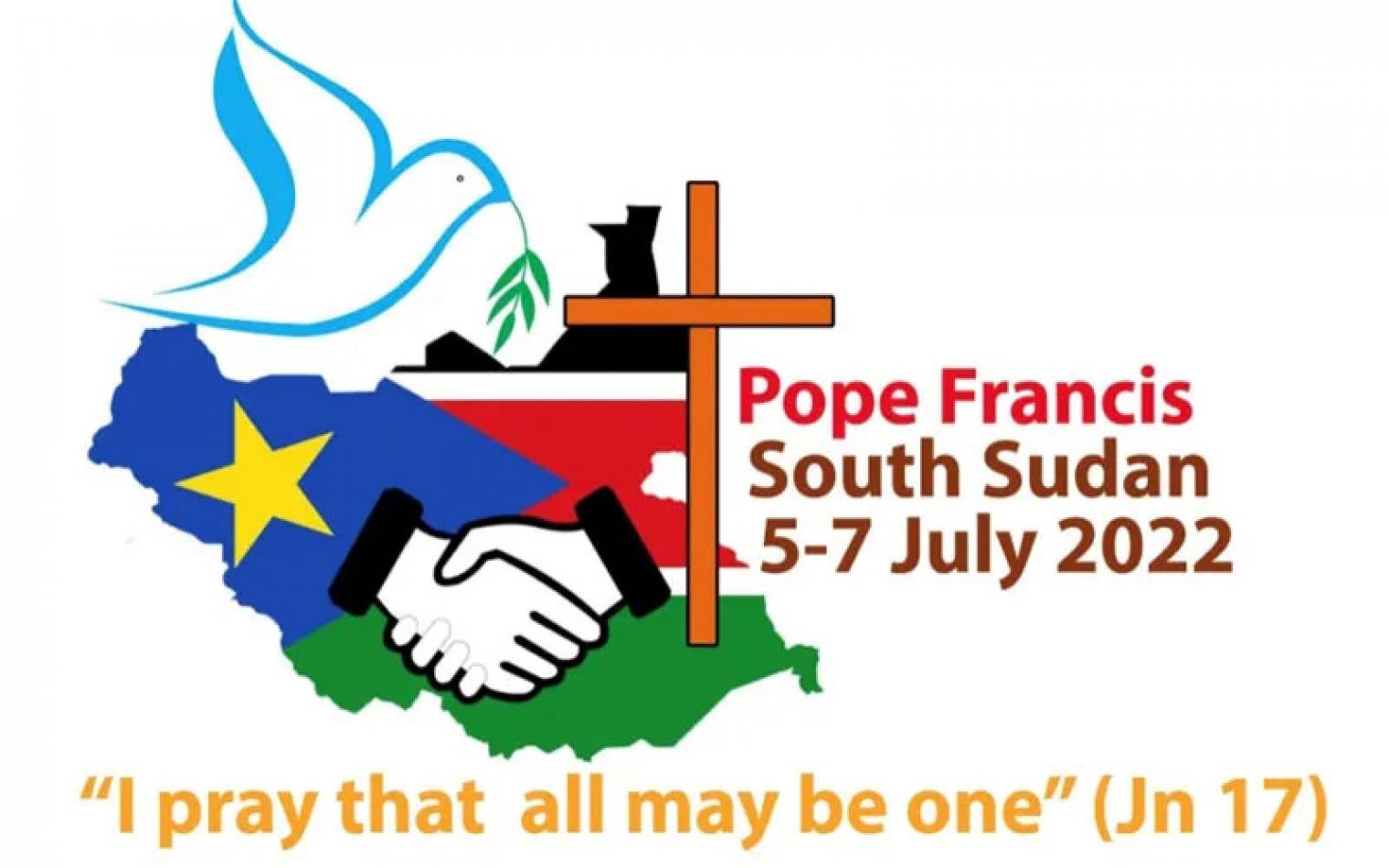 Wednesday, April 13, 2022
The number of refugees arriving in Uganda from neighboring South Sudan has risen in the past weeks, a Catholic Priest ministering in Uganda’s Catholic Archdiocese of Gulu has said, and exuded confidence that the planned Papal visit to the East-Central African country will ignite hope in the displaced people. [Official logo and motto of Pope Francis’ Apostolic visit to the South Sudan. Credit
logo: Vatican Media]

In a message shared with ACI Africa, Fr. Lazar Arasu who, for the last five years, has been involved in pastoral ministry at Don Bosco Palabek Refugee Services, decried the silence on the deteriorating humanitarian situation in Ugandan refugee camps and said that the Holy Father’s visit to South Sudan would restore stability in the country. “It is everyone’s hope that the eagerly awaited visit of the Pope in July will bring the long-awaited peace and stability to South Sudan,” Fr. Arasu says in the Monday, March 28 message.

The Indian-born member of the Religious Institute of the Salesians of Don Bosco (SDB) who serves as the Chaplain for the refugees in the Archdiocese of Gulu highlights the case of 24-year-old Michael Diew, who had trekked for a long time from Bentiu State in Northern South Sudan and arrived at Palabek Refugee Settlement Camp in Northern Uganda.

He says, in reference to Michael, “He looked exhausted after many days of tedious journey from Bentiu state focused on reaching a refugee camp in Uganda. His exodus first took him to Juba, the capital of South Sudan and later to Palabek via Nimule, the border post between South Sudan and Uganda.”

The journey from South Sudan to Uganda consists of walking long distances, taking dangerous canoe rides on the Nile and finally standing in an open truck for several hours at night, Fr. Arasu says. Refugees who have arrived in Uganda report that several IDP camps in South Sudan such as Mangateen were closed due to lack of food supply from World Food Programme, government’s policy of enforcing people to their home areas and camps becoming more and more unsafe and conditions becoming inhumane, Fr. Arasu says.

Young refugees have also confided in the Salesian Priest that the sight of armed soldiers makes them doubt if they are government soldiers who can protect them or rebels who can rob them of little they have or abduct them into fighting forces. The SDB member reports that such lack of trust has forced the vulnerable people to leave their country in search of safety elsewhere. “In the past weeks, people have also urgently left for Uganda due to floods that have ravaged most parts of the middle and northern side of South Sudan,” he says.

South Sudan, the world’s newest country, which gained independence from Sudan in July 2011, has been in civil war since December 2013. In his message shared with ACI Africa, Fr. Arasu says that South Sudan is divided on tribal lines and that the national army, the Sudan People’s Liberation Army (SPLA) is fragmented into several warring factions: one loyal to the state, another called SPLA ‘In Opposition’ (IO), which is loyal to the factional leader and one of the Vice Presidents, Dr. Riek Machar.

He says that besides the known political factions in South Sudan, there are many other war-lords who terrorize the innocent civilians in different areas of the country. The Catholic Priest says that the government is either unable to unite factions or is “unwilling to put order in the army and the state.”

“But we cannot also forget the unhelpful interference of the foreign nations who sustain the war on oil and mineral interests,” he says, and adds, “There are long lists of rich nations with middle-men from the neighboring countries who are the undeniable perpetrators of war.”

The Indian Salesian Priest who has been ministering in East Africa for more than two decades says that the war situation in South Sudan made it impossible for civilians to cultivate their food for years. Others, he says, have been forced to look for schools to enroll their children in Uganda, a country that is also experiencing challenges in its education sector. Unfortunately, he adds, “after COVID-19, schools in Uganda go through enormous difficulties even for their own citizens.”

Fr. Arasu predicts that due to the ongoing instability in South Sudan and continuous movements across the border as well as population growth, the arrival of new refugees from South Sudan is “expected to increase by 811,000 persons by the end of 2022.”

“Aid agencies such as Don Bosco Missionaries witness that in the last three weeks alone at least 800 new refugees have arrived in Palabek Refugee Settlement in Lamwo district, which borders the South Sudan Eastern Equatoria state,” he says. According to the SDB Priest, all the new arrivals are temporarily accommodated at the entrance of the settlement commonly called “Reception Center”, which he says is at the moment filled to the brim.

“The shelter sheds are full to capacity and refugees have taken shelter under the roadside trees. Indeed, it is a pathetic sight!” he says. Fr. Arasu says that refugees arriving in Uganda are also spending months before they get the assistance they require to settle down in the East African country. “It is a norm that when the new refugees arrive, within 15 days they ought to be registered with UNHCR and Office of the Prime Minister, the designated government body responsible for the care of refugees in Uganda and be taken to the plot of land,” the Salesian Priest recounts in his message shared with ACI Africa March 28.

He adds, “It is also mandated that they (refugees) be give a Start Up Kit consisting of a large tarpaulin, a few pieces of wooden tree poles, and a few meters of ropes to make a shelter; and other items such as a set of utensils, blankets and a few other household items are given.”

“It is not always easy for the responsible organizations/agents to provide these items on time. And many other logistics often make the refugees stay in the waiting shelters even for months,” Fr. Arasu says. He describes South Sudan as “an oil and mineral rich nation (that) has one of the world’s longest histories of war and conflict.”

“The neglected refugees only remind us that the rich nations have given into donor fatigue. But the fact is refugees who are often the most vulnerable people on earth are being neglected and pushed to greater misery,” the Salesian Priest says in his message shared with ACI Africa March 28.
[Agnes Aineah – ACI Africa]