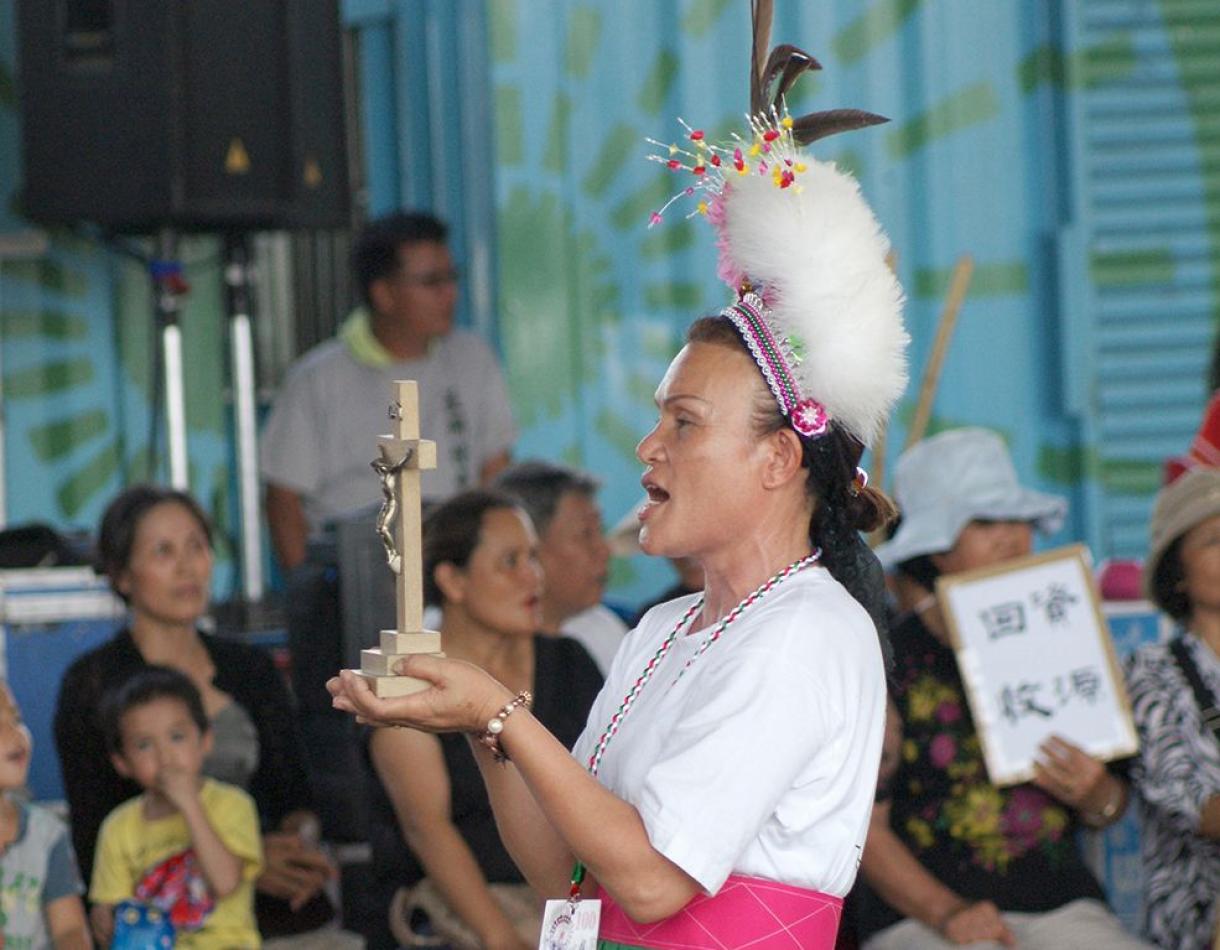 Monday, July 25, 2022
Taiwan has shown how society can benefit when ethnic and religious diversities are acknowledged and human rights are upheld. When Taiwanese President Tsai Ing-wen attended the installation ceremony of Archbishop Thomas Chung An-zu of Taipei in the nation’s capital (July 18, 2020), she delivered a speech in which she hailed the Church’s century-long presence as having been vital for the development of Taiwan. [
Ucanews – World Mission]

“Over the past few decades, the Church has helped Taiwan society in so many ways and at so many levels that it is impossible to describe them in a few words or a few days,” Tsai said. The gesture of amity and solidarity from the outspoken leader had political connotations, most likely aimed at communist China some 160 kilometers away where Christians and other religious minorities are persecuted in a strikingly contrasting sociopolitical scenario.

The nation’s first female president has recently enraged Chinese authorities by supporting the pro-democracy movement in Hong Kong and by offering a haven to victims of the former British colony’s draconian national security law. Taiwan is a sovereign, democratic nation even though it has never officially declared independence. However, China still considers Taiwan as one of its provinces and has threatened to annex it militarily.

It does not have sovereign status at the United Nations, at the behest of China, yet it has diplomatic relations with 14 countries and maintains unofficial and economic relations with some 47 states. The Vatican is the only European state to have diplomatic ties with Taiwan while the United States is its strongest ally. Taiwan has expressed disquiet over a secretive Vatican-China deal signed in 2018 over bishop appointments, and it has warned the Holy See against cozying up to a communist regime that violates religious and human rights.

Diversity Of Faiths
In the Republic of China, as Taiwan is officially known, Christianity has become very much part of national life in a country that embraces the diversity of faiths and ethnicities for the common good and integrated development. About four percent of Taiwan’s nearly 24 million-strong population are Christians, while Buddhists make up about 35 percent, Taoists 33 percent, and non-religious about 19 percent.

Catholic missionaries first arrived in Taiwan in 1626 when six Dominican priests, led by Father Bartolome Martinez, joined a Spanish expedition team. The island, then called Formosa, was under the Dutch East India Company and was inhabited mostly by Taiwanese aboriginals. However, it took another two centuries before missionaries from the Philippines arrived again to establish a permanent Catholic presence. In 1859, the Dominicans returned and started evangelizing aboriginals and migrants from mainland China, mostly from the provinces of Fujian and Guangdong.

Shortly after the re-emergence of the Catholic Church, Presbyterians from Britain, the US, and Canada landed in Taiwan. Although Christians are a minority, Protestants have played an important role in politics thanks to their involvement in democracy movements. Since 1949, four Taiwanese presidents have been Protestant Christians.

Church’s Role
Chen Chien-jen, a Catholic epidemiologist, served as vice president from 2016 to 2020. For more than 160 years, the Church has not only played an important role in developing the nation but also acted as a vital bridge between the nation, the Vatican, and China despite the atheist republic’s overarching political and military maneuvering. From about 5,000 members in 1949, the Taiwanese Church today has an estimated 300,000 Catholics in one archdiocese and six dioceses, with a significant number being refugees from mainland China. Migrant Catholics–mostly Vietnamese, Filipinos, and Indonesians–are estimated to comprise around 100,000.

The exodus of many Catholics from China over the decades is intertwined with Taiwan’s tumultuous political history since 1949, when the Chinese Nationalist Party led by Chiang Kai-shek, his one million supporters, and 800,000 troops fled mainland China and settled on the island following defeat to the communists spearheaded by Mao Zedong.

Chiang Kai-shek ruled Taiwan as a military dictator from 1950 until his death in 1975. His son, Chiang Ching-kuo, ruled the island from 1978 to 1988. Under Chiang Kai-shek’s regime, hundreds of majority Taiwanese accused of being anti-government were oppressed, imprisoned, and executed in what was known as the White Terror. The dynastic and despotic rule ended as the nation gradually moved to democracy with legislative reforms in the 1980s and 1990s.

Economic Boom
Due to liberal and expansionist trade policies, Taiwan has seen an economic boom, especially in computer electronics. By 1986, Taiwan had become one of the world’s largest producers of computer terminals, circuit boards, monitors, and electronic calculators. Today, the manufacturing sector is the mainstay of the nation’s US$ 605 billion economy, which has not faltered amid COVID-19 as Taiwan was highly successful in battling the pandemic with only 937 cases and nine deaths.

Throughout Taiwan’s history, religious groups, especially Christians, didn’t face any major persecution thanks to their international connections, although the faith didn’t attract ethnic Taiwanese who followed their folk religion influenced by Buddhism and Taoism. Thus, most Catholics in Taiwan as well as most Taiwanese priests are descendants of migrants and refugees from China. Initially, the Church had to battle pro-integration and pro-independence groups within itself.

It has been a long-running challenge to convince converts to attend church liturgy once a week as traditional faiths such as Buddhism and Taoism don’t make it mandatory for the faithful to visit temples. The state refrained from interfering in the Church’s affairs and the Church operated independently to engage in national development.

Schools, Colleges, And Universities
The Church in Taiwan runs about 50 schools, colleges, and universities to educate thousands of pupils each year. Fu Jen Catholic University in Taipei is an internationally acclaimed institution. Two other prominent Catholic universities are Providence University and Wenzao Ursuline University of Languages.

The Taiwan Catholic Regional Seminary in Taipei is a melting pot for training priests from all over East Asia including China. The Church also operates seven large hospitals and about 100 nursing homes that offer standard but affordable healthcare services. A large chunk of the Church’s pastoral care is dedicated to immigrants from various countries.

During the Cultural Revolution (1966-76) in Maoist China, the Taiwanese Church was a vital passage for the Vatican to get information and provide support to persecuted Chinese churches. The Church also launched its Bridging Endeavor project to provide a genuine assessment of communist China for left-wing intellectuals and students in the West who had a great interest in Maoism.

As the Church found its place in the diverse religious landscape of Taiwan, it provided opportunities for members to engage in the Focolare Movement and experience monastic communities, pastoral ministries, and dialogues on morality, sociocultural, and environmental issues with Buddhists and Taoists.

Missionaries also helped sustain the local language and culture. Maryknoll missionaries, who arrived in Taiwan in the 1950s, learned the language to work among Taiwanese people, which was once forbidden. Maryknoll has also operated Friendship House in downtown Taipei since 1974 to serve Catholics who moved to the city for work.

Priests from the Bethlehem Mission Society (BMS) worked extensively among ethnic aboriginal people in Hualien where they founded schools and hospitals. The missionaries also translated the New Testament to the native language, which was close to extinct. Their great efforts paid off and in 1998 the first aboriginal bishop, John Baptist Tseng Chien-tsi, an ethnic Ami, was ordained. He retired in 2017.

Close Ties With Mainland
Despite being separate from the mainland, the Catholic Church in Taiwan has continued to maintain close ties with both the state-sponsored and underground churches in China for decades. Almost all liturgical books composed in Mandarin Chinese and used in China are from Taiwan. The Taiwan Church often sends priest-professors to teach in Chinese seminaries run by the state-run and underground churches. However, Taiwanese priests often cannot celebrate Mass openly in China out of fear of a state backlash.

As of 2020, there were 664 diocesan and religious priests and about 1,033 nuns in Taiwan. Yet the Church faces challenges to get priestly and religious vocations. In an interview, former Taipei Archbishop John Hung Shan-chuan said: “The social status of the priests is not high. The people of Taiwan want their sons to be trained as doctors, professionals, technicians, financial leaders, but not priests.”

Interfaith marriage also poses a challenge for the Church. Catholics who marry non-Christians tend to stop practicing their faith. In 2014, Maryknoll started a Catholic dating site, Love Cana, to help Catholics find marriage partners. The life and history of the Catholic Church in Taiwan is a great example of how the state and the society can benefit when ethnic and religious diversities are acknowledged and appreciated, and civil liberties and human rights are upheld.
This wonderful story should be a lesson for states and religious groups who are at war with each other, especially in China. Political and religious hawks need to realize useless fighting can bring nothing good, but harmony can bring peace and prosperity.
[Rock Ronald Rozario (Journalist)  – Ucanews – World Mission]