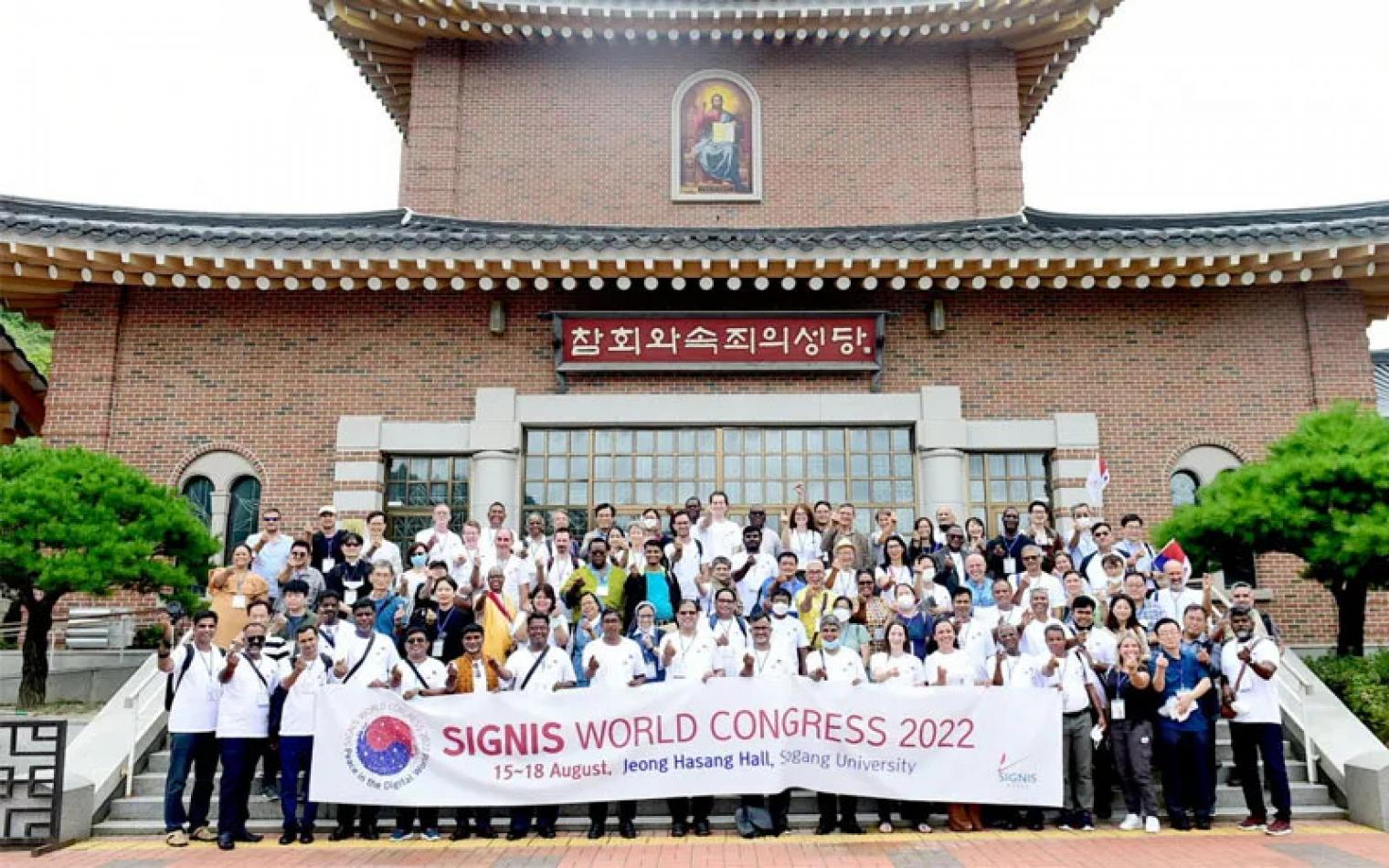 Saturday, August 20, 2022
There is need for Catholic journalists across the globe to safeguard the rights of civilians caught up in violent conflict in their professional practice, delegates of the Sixth SIGNIS World Congress 2022 have said. [Credit photo: SIGNIS. Text: ACI Africa]

In a statement issued at the end of their August 15-19 Congress that was held at Sogang University in Seoul, South Korea, the delegates of the World Catholic Association for Communication, SIGNIS, event take note of challenges occasioned by digital media and say that there is need to “move from individual engagement to community building”. “We urge media practitioners and citizens to take action to protect the human rights of civilians caught up in war and conflict zones,” they say, and urge media professionals to not only report violent events but also “engage actively in supporting the victims of war and working towards conflict resolutions.”

By constructing stories that include the resolution of conflicts, the delegates of the SIGNIS Congress say journalists “can pass unto the next generation the legacy of peace”. They underscore the need for Catholic journalists to “cultivate the journalistic values of advocating for justice, holding authorities to account, and establishing common ground through well-researched context and nuanced explanation.”

These values, the delegates say, will help provide “a guiding light for our readers, viewers and listeners”. The delegates who were drawn from 34 countries have also, in their statement, expressed concern about the “digital divide” brought about by online media forums. “We live in a world where the ‘digital divide’ increases the gap between the rich and the poor leading to inequality in accessing the fruits of the digital revolution,” they say, adding that the media has also played a role in spreading “destructive behaviors” such as pornography, and overexposure to violence.

The delegates who met under the theme, “Peace in the Digital World” say that as people become more connected to various forms of digital media, they become challenged with “socioeconomic, cultural, political, religious, spiritual, and ecological disconnections, leading to isolation, confusion and hopelessness.”

In the light of the highlighted challenges, delegates of the SIGNIS Congress 2022 say there is need for Catholic journalists to tell stories of faith and hope especially taking advantage of online platforms. “We need to weave the web with truth and beauty of faith and hope. Technology has to be imbued with ethics and thoughtfulness,” they say, and add, “We believe that it is possible to build a new society by creating awareness that inspires us to work together in peace with people of different cultures, beliefs, religions, and ideologies.”

SIGNIS delegates express their awareness of peace building stories that the youth across the globe tell through digital platforms and “extend an open invitation to the young people of the world to join hands with us in peace building processes.”

“We realize their vital role in building communities and promoting peace through modern technologies using creative methodologies,” they say. In one of the sessions at the SIGNIS congress, a Kenyan Catholic Nun expressed concern about the tendency of young people to prioritize “friendship with mobile phones”.

Sr. Teresia Wamuyu Wachira said, “Young people are becoming social hermits, therefore revealing a disconnect with the culture, revealing that the fabric of our society is getting disconnected.”

The member of the Institute of the Blessed Virgin Mary (IBVM), commonly known as the Loreto Sisters, called on Catholic communicators to search for creative ways to bring values to the young people. “The journey continues in searching for ways of creative and meaningful communication using a network created not to entrap, but to liberate, to protect a community of people who are free,” Sr. Wachira said during her August 16 presentation.