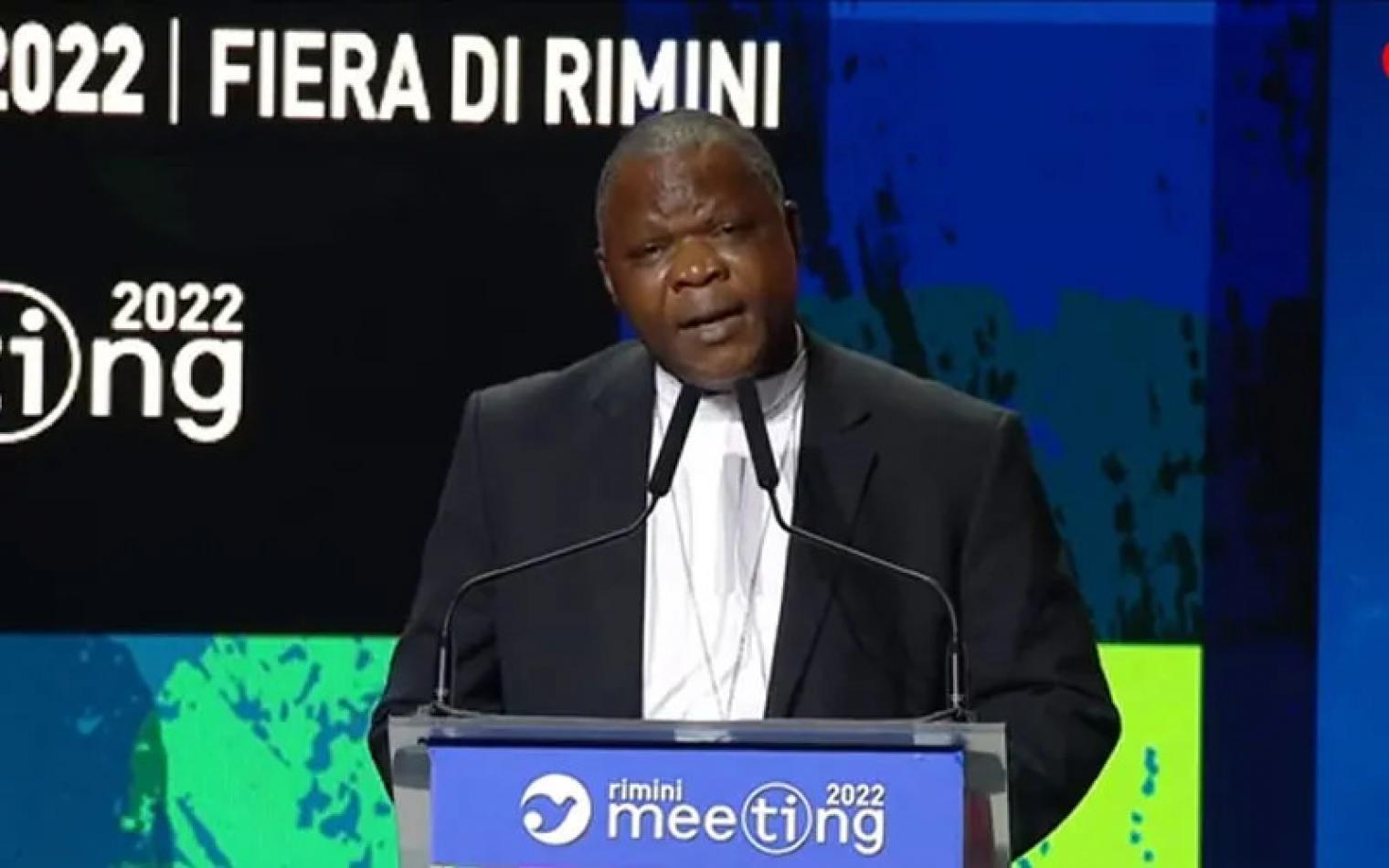 Wednesday, August 24, 2022
The Cardinal Nzapalainga, in the Central African Republic, has decried the numerous ongoing violent conflicts in the world and cautioned against the “logic of war and supremacy”, describing them as real threats to humanity. “When human language creates its own words for peace, for harmony, for living together for love, then our humanity will be restored and we can once again sing the hymn to love...,” Cardinal said in his August 20 presentation at the Rimini Meeting in Italy. [
ACI Africa]

In his presentation at the ongoing 43rd Meeting of Friendship Among Peoples (Rimini Meeting) in Italy, Dieudonné Cardinal Nzapalainga underscored the need for peace across the globe, saying, “The world today is really in need of peace. Peace is becoming the most precious good that humanity is seeking.”

“The logic of war and supremacy is a real threat to the human race and to our world, which is suspended from the unbridled appetites of the nuclear powers,” Cardinal Nzapalainga said on the first day of the August 20-25 meeting in the Italian city of Rimini. Inaugurated in 1980, the Rimini Meeting was born out of a desire of some friends from the Italian city "to meet, get to know, and bring to Rimini everything good and beautiful that is present in the culture of those times." It has since been described as "an encounter among persons of different faiths and cultures; a place for friendship where peace, socialization, and a friendship among peoples may be established".

Held annually during the last week of August in Rimini, the city that is situated on the Adriatic coast in Italy’s Emilia-Romagna region, the weeklong meeting brings together "great political personalities, managers, representatives of different religions and cultures, intellectuals and artists, athletes and protagonists of the world scene visit it". It has been described as a meeting of "people that are curious, open, able to judge, come from all over the world for this event that takes place every year since more than thirty years."

In his August 20 presentation titled, “Artisans for Peace, a Passion for Conciliation”, Cardinal Nzapalainga said that with the war in Ukraine and the various armed conflicts in several African countries, “it is as if humanity is preparing for the last war against man”. “Our language today is full of words linked to war, violence, hatred, resentment, revenge,” the Local Ordinary of the Archdiocese of Bangui in CAR said.

The member of the Congregation of the Holy Spirit (Spiritans) recalled hate speech messages on television and posts on social media forums that seem to foster violence. He said, “I am often irritated and outraged when I see speeches on television. They tend to fan the flames and call for weapons to be sent in.”

“Let us not forget that violence breeds violence,” the Cardinal said, adding that humanity “must learn to get out of this spiral, and this logic of war by wanting to settle everything with weapons.”

Citing Martin Lurther King, he emphasized, “We must learn to live together as brothers or we will all die together as fools.”

“True peace cannot be obtained through the use of force of weapons,” Cardinal Nzapalainga said, and added, “True peace comes once the causes of conflicts and wars are known. Conflicts usually arise from situations of systemic injustice.”

He sought to correct misconceptions around the concept of globalization, insisting on the opportunities that it brings to human societies. “Globalization must not be seen today as the exclusion of the weakest or the extinction of nations that have long been dispossessed and dominated,” Cardinal Nzapalainga said at the Rimini Meeting that is being held under the theme, “A Passion for the Person”.

In his considered view, “Globalization must be an opportunity in which all nations are symphonically called upon to participate in the concert of well-being and happiness.”

“The many conflicts in Africa today must challenge our universal conscience,” he said, and added, “The construction of walls and alliance blocks in the West must remind us of the need for solidarity in Africa, Asia, the Middle East and everywhere else in the world.”

In order to reconcile people in conflict, Cardinal Nzapalainga said, “One must be a peacemaker in the footsteps of Jesus Christ”. “Beyond the simple etymological or definitional framework, peace is above all, a commitment.  It's an existentialist determination to create a framework of life where living together is made possible,” the Cardinal said, adding that “this can only happen if we draw from the deepest depths of our humanity the required energies.”

“To be a peacemaker requires a great capacity for judgment and analysis in order to be able to have a fair and objective hermeneutic of the situation and the belligerents in process,” he said. The peacemaker, Cardinal Nzapalainga continued, “Should not choose sides.”

“They should be on the side of everyone, be impartial but without ever hiding or betraying the truth,” the Cardinal said, and added, “We must invent words that move boundaries, words that liberate, words that give forgiveness.”

“When human language creates its own words for peace, for harmony, for living together for love, then our humanity will be restored and we can once again sing the hymn to love and let life flow through each of us,” Cardinal Nzapalainga said in his August 20 presentation at the Rimini Meeting.