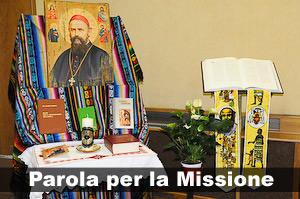 The body of Jesus conserves the signs of his total self-giving
Fr. Fernando Armellinie

The experience of the Risen One told in this gospel passage took place in Jerusalem on Easter Sunday. The day began with the journey of the women to the tomb and with the announcement of the resurrection transmitted to them by “two men in dazzling garments appeared” (Lk 24:1-8).

At night, the eleven and a group of other disciples who were with them were talking of the manifestation of the Risen One that Simon and a few others had. Then the two disciples of Emmaus, almost out of breath, came and reported what had happened to them along the way and how they had recognized the Lord in the breaking of bread.

In this context, we can imagine the irrepressible joy when Jesus himself appeared among them (vv. 35-36). We would expect the reaction John referred to us: “The disciples kept looking at the Lord and were full of joy” (Jn 20:20). Luke says instead that they were “amazed, frightened and upset,” believing of “seeing a ghost” and “doubts in their hearts” rose (vv. 36-38). Their reaction was inexplicable.

It is difficult then to understand the reason for their difficulty in believing: “In their joy they didn’t dare believe” (v. 41). How to reconcile joy with doubts? The fact that Jesus eat fish before disciples is also surprising (vv. 39-43). Paul ensures that the bodies of the resurrected is not material as what we have in this world (1 Cor 15:35-44); it is a “spiritual” body, passing through locked doors (Jn 20:26), therefore, cannot eat.

Some people think something similar happened as to what is told in the Book of Tobit, where it is said that the Archangel Raphael, the moment he makes himself known, said: “All the time that I was visible to you, I neither ate nor drank anything. I only appeared to do so” (Tob 12:19). But this explanation is not convincing, because, in this case, the “evidence” of corporeality given by Jesus would be based on an illusion, on a hallucination.

Jerusalem is sufficiently far away from the sea and it is very unlikely that the disciples could immediately pull out roasted fish. The fact would be more similar to Capernaum. These difficulties, rightly highlighted by rationalists, are valuable. They lead us to go beyond the immediate meaning of the story in order to grasp the deeper meaning. Luke has resorted to a concrete language and material images to convey ineffable truths. What do the wonder, fear, doubt, the fact of eating in front of the disciples mean and then… the strange recognition through the observation of the hands and feet? People recognize each other by face, not by the hands and feet.

Every experience of God told in the Bible is always accompanied by a reaction of fear on the part of man. We remember the exclamation of Isaiah at the time of his calling: “Poor me! I am doomed! For I am a man of unclean lips and yet I have seen the King, Yahweh Sabaoth” (Is 6:5). We think of Zechariah and Mary who were upset at the announcement of the birth of a child (Lk 1:12.29), or to the apostles who were filled with fear during the transfiguration (Mk 9:6). This is not the terror that one experiences in the face of danger, but the amazement of those who receive a revelation from God.

In our passage too, the wonder and fear are biblical images. The evangelist uses it to describe a supernatural, ineffable experience of the disciples who were flooded by a light that is not of this world, but from God. They met the Risen One.

Wonder and fear always accompany even today, the manifestations of the Lord “in the middle” to his communities. Wonder and fear are the images of the radical changes that the apparition of the Risen Christ brings to human life. With its radiance, the light of Easter reveals the pettiness of each withdrawal to the current world and opens the minds and hearts on absolutely new reality to the world of the resurrected, world that fascinates and inspires wonder and fear, for it is God’s world.

To get involved in this new dimension is neither simple nor immediate. It includes hesitation and perplexity. There are doubts, as stressed, not only by today’s gospel (v. 38), but each story of the experience of the Risen Christ.

Skepticism, disbelief, uncertainty about the identity of the man who appeared have characterized the slow and arduous journey that led the apostles to the faith. To them, as to us, the reality of the resurrection has appeared, at times, too good to be true. In some circumstances, they had the feeling of having to deal with ghosts; other times, as happened on the Sea of Galilee, they have not recognized in the Risen One the Master whom they had followed along the roads of Palestine. Even after the last event on a mountain in Galilee — Matthew the Evangelist notes — “although some doubted” (Mt 28:17).

Their persisting doubts, even after so many signs offered by the Lord, prove that the apostles were not gullible; then they show that faith is not a surrender to the evidence, but it is the free response to a call. There are always good reasons to reject it, and the fact that there are non-believers proves that God acts in a very discreet way. He does not impose himself, does no violence to the freedom of the person.

Luke’s emphasis on the corporeality of the Risen One comes from a pastoral concern: the Christians he addressed to were imbued with the Greek philosophical ideas. They did not deny that, after death, he went into a new form of life, but this was reduced to survival of the spiritual component of man. The material body was considered to be a prison for the soul who sought to break away from the earth and to rise towards the sky. The bodily resurrection was inconceivable and, when apparitions of the dead were reported, they always imagined shadows, spirits, ghosts.

To let the newness of the Christian concept of the resurrection be understood by those who were linked to this culture, Luke — the only one among the evangelists — was forced to resort to a very “corporeal” language. The disciples — he assures — have touched the Risen One; they have eaten with him; they were invited to look at his flesh and his bones.

They are affirmations of a staggering realism. If one does not keep in mind who the recipients are and what is the objective which has led Luke to express himself in this way, one runs the risk of equating the resurrection of Jesus to the resuscitation of his cadaver, on his return to the way of life that he had before.

The resurrected ones do not take the material body, made up of atoms and molecules, which they had in this world. It would not make sense to be stripped at the time of death, of this body, and then get it back on the day of resurrection of the dead. God could not have decreed the death of a person in order to give him back the same form of life. If he destined the person to die it is to introduce him to a new way of life completely different from the present one, so different that it cannot be neither imagined nor verified. Our senses are not able to capture it; it can be grasped only through signs and be accepted in faith. At this point we try to reformulate the passage’s theological message using a language more understandable to our culture.

The Risen One — ensures Luke — was not a ghost, but the same Jesus that the disciples had touched with their hands and with whom they had eaten. He had changed his appearance; a sublime metamorphosis that made him unrecognizable had taken place in him. He was transfigured, but it was not another person. He kept his body, his ability to manifest himself outwardly, to relate, to communicate his love, but his was a body different from ours, it was — as taught by Paul — “spiritual” body (1 Cor 15:44).

He has a body that allows him to continue to eat and drink with us, that is, to share our hopes and delusions, our joys and sorrows. He is not out of reach, not a spirit irremediably distant and detached from our reality. Even after his return to the Father, he remains fully human, one of us.

He is not the only risen one; he is the first raised from the dead (Col 1:18). What happened to him is repeated in every disciple. At the time of death, there won’t be a split of the soul from the body (this is Greek philosophy, not a biblical concept), but the human, as a whole, will be transfigured in God’s world.

Now the invitation of the Risen Lord to look at his hands and his feet is better understood (v. 39). While people are identified by the face, Jesus wants to be recognized by the hands and feet. The reference is to the wounds impressed by the nails and to the cross, culmination of a life spent for love. The body of Jesus conserves the signs of his total self-giving even as the Resurrected One.

It is contemplating these hands and these feet that man discovers the true and only God. The Christian will also be recognized by the hands and feet. Blessed are those who can show God their hands and their feet marked by acts of love. With Paul they can boast: “I bear in my body the marks of Jesus” (Gal 6:17).

In the last part of the passage (vv. 44-48) the way to make today the experience of the Risen Lord is shown: it is a must to open the hearts to the understanding of the scriptures. It is through the Scriptures that Christ continues to show to his disciples, “his hands and his feet,” that is, his gestures of love.
Then the big announcement also present in the other two readings is introduced: In the name of Christ conversion and the forgiveness of sins will be preached to all the nations.

To believe in the resurrection of the Lord involves a radical change of thinking and living. The night of the Passover marked, for the first Christians, the passage from death to life, through the sacrament of baptism (1 Jn 3:14). The announcement of the resurrection of Christ is effective and credible only if the disciples can, like the Master, show people their hands and their feet marked by works of love.
by Fr. Fernando Armellinie