Home
Gerechtigkeit, Frieden (JPIC)
JP NACHRICHTEN
Globalization 4.0 can be a brilliant future if we break from the injustice of the past

Globalization 4.0 can be a brilliant future if we break from the injustice of the past

Friday, February 1, 2019
Imagine a world in which women and girls have their rights respected, climate change receives the attention it so urgently requires, and poverty has been eliminated. Never before have we had the means that we have now to make this vision a reality. Image: REUTERS/Pascal Lauener (Switzerland). [World Economic Forum]

In Africa, for example, I am excited to see how off-grid solar energy is expanding rapidly. In Kenya, mobile banking has significantly improved financial inclusion, particularly for poor women.

These and other technologies associated with the Fourth Industrial Revolution (4IR) have the potential to boost productivity, incomes, and leisure time for workers, while also decarbonizing our economies and freeing women from the hold of unremunerated care work. But, to realize this potential, we will have to adopt an entirely new approach to globalization.

The World Economic Forum’s theme for its annual meeting in Davos next month is Globalization 4.0, which comprises many of the competing narratives now shaping our world. In the dominant narrative of the last 40 years, GDP was king, and countries pursued deregulation, loosened capital controls, cut corporate taxes, and liberalized their labor markets.

The eruption of popular anger that has roiled many countries’ politics in recent years is rooted in the failure of that neoliberal model. But there is no economic law requiring globalization to be a race to the bottom. On the contrary, for humanity to have any hope at all, Globalization 4.0 must break with neoliberalism for good.

I fear that business and government elites gathering in Davos do not seem to have grasped this fully. Until they do, globalization will continue to fuel inequality and sow discontent around the world. 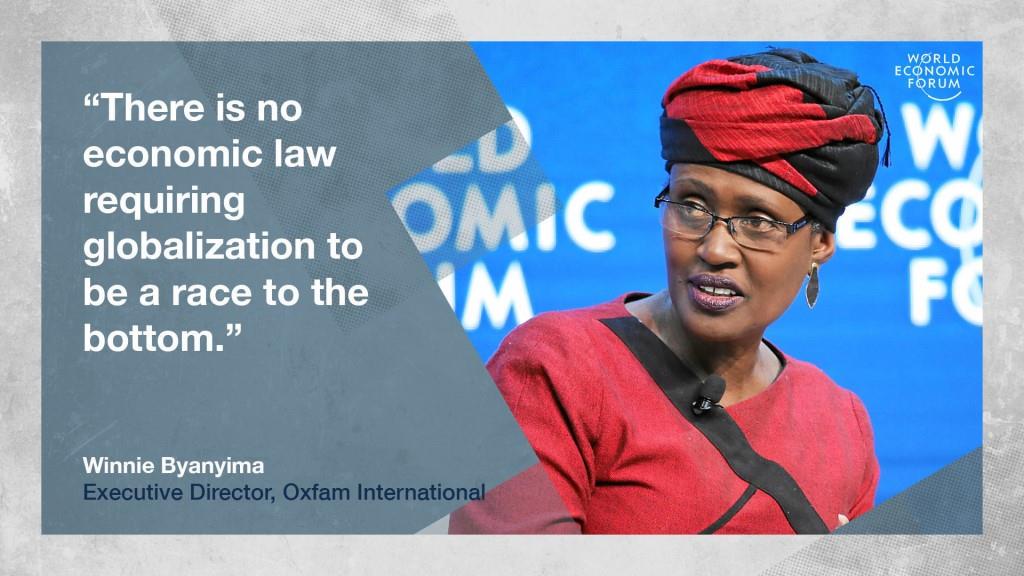 Rising inequality threatens much of the progress that we have made over the past half-century. While the world’s richest 1% took home 82% of all new wealth last year, the World Bank reports that the “decline in poverty rates has slowed, raising concerns about achieving the goal of ending poverty by 2030.” Even more shocking, extreme poverty in Sub-Saharan Africa is actually increasing; and almost half of all people worldwide are one medical bill or crop failure away from destitution.

These realities will persist as long as billionaires in Silicon Valley, Africa, and elsewhere are writing the future narrative of globalization. We need new stories to challenge the status quo. Consider that of Budi, a shrimp-processing worker in Southeast Asia who must peel 950 shrimp per hour to earn a minimum wage. It would take Budi more than 5,000 years to earn what a US supermarket CEO makes in one year.

Or, consider the women farmers in my village of Ruti, Uganda, who wonder if economic growth will ever result in free, quality education for their kids. Rich countries owe much of their prosperity to universal education. But in developing countries around the world, fees charged by for-profit schools are driving families deeper into poverty.

One person whose story must be heard is Berta Cáceres, an indigenous-rights leader in Honduras who was assassinated in March 2016 for resisting a destructive hydroelectric dam project. In November, a court ruled that Cáceres’s murder was carried out with the knowledge and consent of executives from Desa, the corporation behind the dam.

When globalization has no rules or referees, the bullies will always win. Even research by the International Monetary Fund now shows that financial globalization has led to “significant increases in inequality,” as has increased trade in some developing countries. Likewise, climate change is symptomatic of a grossly unequal economy in which the rich exploit the environment for private gain.