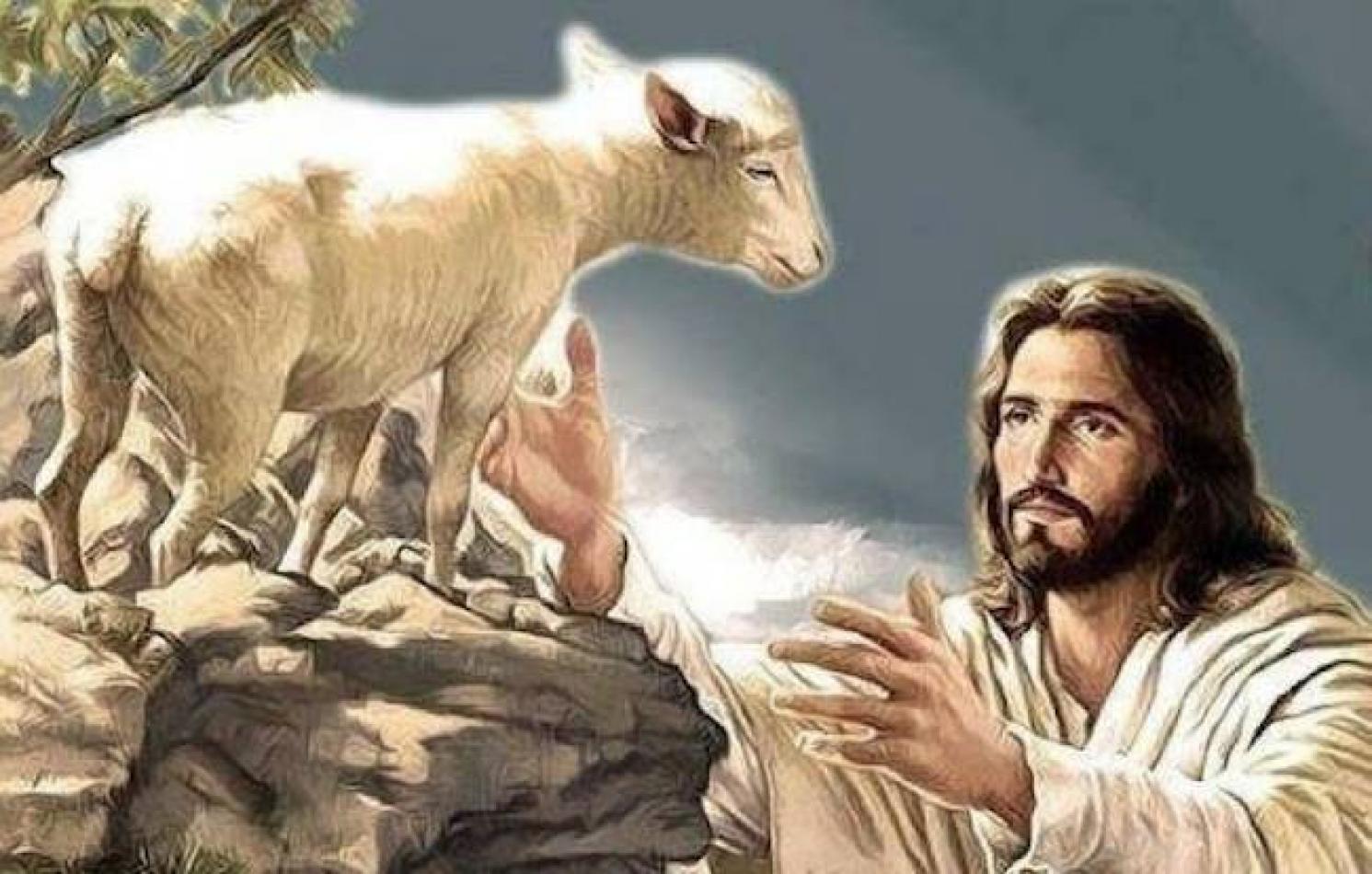 The land of Israel is in large part mountainous and used for grazing sheep. Keepers of flocks were Abel, Abraham, Jacob, Moses, David. It should not, therefore, cause consternation that there are recourses to images of pastoral life in the Bible. God is called “shepherd of Israel”: he leads his people like sheep, treats them with love and care, guides them toward abundant pastures and fresh springs of water (Ps 23:1; 80:2). 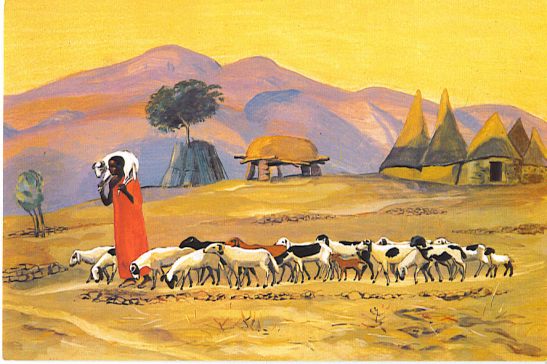 The land of Israel is in large part mountainous and used for grazing sheep. Keepers of flocks were Abel, Abraham, Jacob, Moses, David. It should not, therefore, cause consternation that there are recourses to images of pastoral life in the Bible. God is called “shepherd of Israel”: he leads his people like sheep, treats them with love and care, guides them toward abundant pastures and fresh springs of water (Ps 23:1; 80:2). Even the Messiah is announced by the prophets as a shepherd to shepherd Israel: “The day is coming when I will raise up a king who is David’s righteous successor. He will rule wisely and govern with justice and righteousness.” (Jer 23:1-6; Ezk 34).

Jesus will refer to these images when one day, descending from the boat, he sees a great crowd rushing on foot to listen to him a word of hope. Mark says: “he had compassion on them for they were like sheep without a shepherd” (Mk 6:33-34).

In John’s Gospel, Jesus presents himself as the expected shepherd (Jn 10:11.14), as the one who will lead the people along the path of righteousness and faithfulness to the Lord.

The fourth Sunday of Easter is called the Sunday of the Good Shepherd because in it, every year, the liturgy presents a passage from John chapter 10 in which Jesus presents himself as the true shepherd. The four verses that we read in the Gospel today are drawn from the final part of the speech of Jesus and they want to help us deepen the meaning of this biblical image.

We begin with a clarification: when we talk about Jesus the Good Shepherd the first image that comes to mind is that of the Master who holds a lamb in his arms or on the shoulders. It is true: Jesus is the good shepherd also in the way that he goes in search of the lost sheep, but this is the reproduction of the parable found in the Gospel of Luke (15:4-8). The good shepherd spoken of in the Gospel of John has nothing to do with this sweet and tender image. Jesus does not present himself as one who affectionately caresses the wounded lamb, but as the hard, strong man, decided to fight against the bandits and ferocious animals, as did David chasing the lion and the bear that tore away a sheep from the flock; he knocked them down and plucked the victim from their mouth (1 S 17:34-35). Jesus is the Good Shepherd because he is not afraid to fight untill he gives his life for the sheep that he loves (Jn 10:11).

The first statement that he does is very strong: my sheep—he says—“they shall never perish; no one will ever steal them from me” (v. 28). Their salvation is not guaranteed by their docility, their loyalty, but by his initiative, his courage, and his gratuitous and unconditional love. This is the big announcement! This is the beautiful news that comes from Easter and the Christian believer must communicate to every person. Even to those who have it all wrong in life, he must ensure: your miseries, your shortcomings, your choices of death will not be able to defeat the love of Christ.

The second image that of the sheep, is to be clarified because it can provoke some discomfort. The flock following the “Good Shepherd is composed of whom?” Some will perhaps spontaneously answer: lay people who meekly accept and practice all the norms established by the clergy. Pastors are therefore the church hierarchy, while sheep would be the ordinary faithful.

We make it clear: the only shepherd is Christ, and he is because—as we pointed out in the Second Reading—he is the Lamb who has sacrificed his own life. His sheep are those who have the courage to follow him in this gift of life. The shepherd is then a Lamb that shares in all the fate of the flock.

There is another misconception that should be dissolved, to identify themselves with the flock of Christ. There are gray areas in the Church who exclude themselves from the Kingdom of God because they thrive in sin, while there are huge margins, beyond the confines of the Church, which fall within the Kingdom of God because the Spirit is at work there. The action of the Spirit manifests itself in the impulse of the gift of life to the brother or sister: “The one who lives in love lives in God and God in him” (1 Jn 4:16). Whoever, while not knowing Christ, sacrifices himself for the poor, practices justice, brotherhood, sharing of goods, hospitality, loyalty, sincerity, the rejection of violence, forgiveness of enemies, the commitment to peace can be a disciple of the Good Shepherd. This should make so many Christians, who are wallowing in auto complacency that might eventually prove tragic illusions, attentive. The Shepherd may one day, unexpectedly say to some: “I do not know where you come from” (Lk 13:25).

The display of security, preconceived distrust against members of other religions and prejudices toward non-believers are still so deeply rooted and pernicious as the false irenicism.

How can people become members of the flock that follows Jesus? What happens to the sheep who are faithful to him? Today’s Gospel says that it is not we who take the initiative to follow him. He is the one who calls: “My sheep hear my voice and I know them and they follow me” (v. 27).

The disciples of Jesus live in this world, living among people. They hear so many calls and receive even misleading messages. There are many who pose as shepherds, that promise life, well-being, happiness and invite people to follow them. It is easy to be deceived by charlatans. How to recognize among many voices, that of the true Shepherd? It is necessary to accustom the ear. He who hears a person only for five minutes and then for a year does not hear him anymore, will find it difficult to distinguish the other’s voice in the crowd. He who hears the Gospel only once a year does not learn to recognize the voice of the Lord who speaks.

It is not easy to trust Jesus because he does not promise success, triumphs, victories, as do all the other shepherds. He asks for the gift of self, demands the renunciation of seeking one’s own advantage, demands the sacrifice of life. And yet—he assures—this is the only path that leads to eternal life (vv. 28-29). There are no shortcuts; who indicates other paths is cheating and leads to death.

The passage ends with the words of Jesus: “I and the Father are one” (v. 30). This, a bit abstract sentence, indicates the path to follow to achieve unity with God. It is necessary to become “one” with Christ. This means that one has to achieve unity of thoughts, intentions, and actions with him.

This statement makes us reflect on the ministry of those who are called to “graze” the flock of Christ. Sometimes in the Christian community, there is a certain tension between those who, with not very exact terms, are called: clergy and laity. Some say that the laity must be united with their “shepherds”; others say that these shepherds must be united with the people of God. Perhaps it is more correct to think that all the people of God, laity and clergy, together should follow the only Shepherd who is Jesus and become, with him, “one” with the Father.