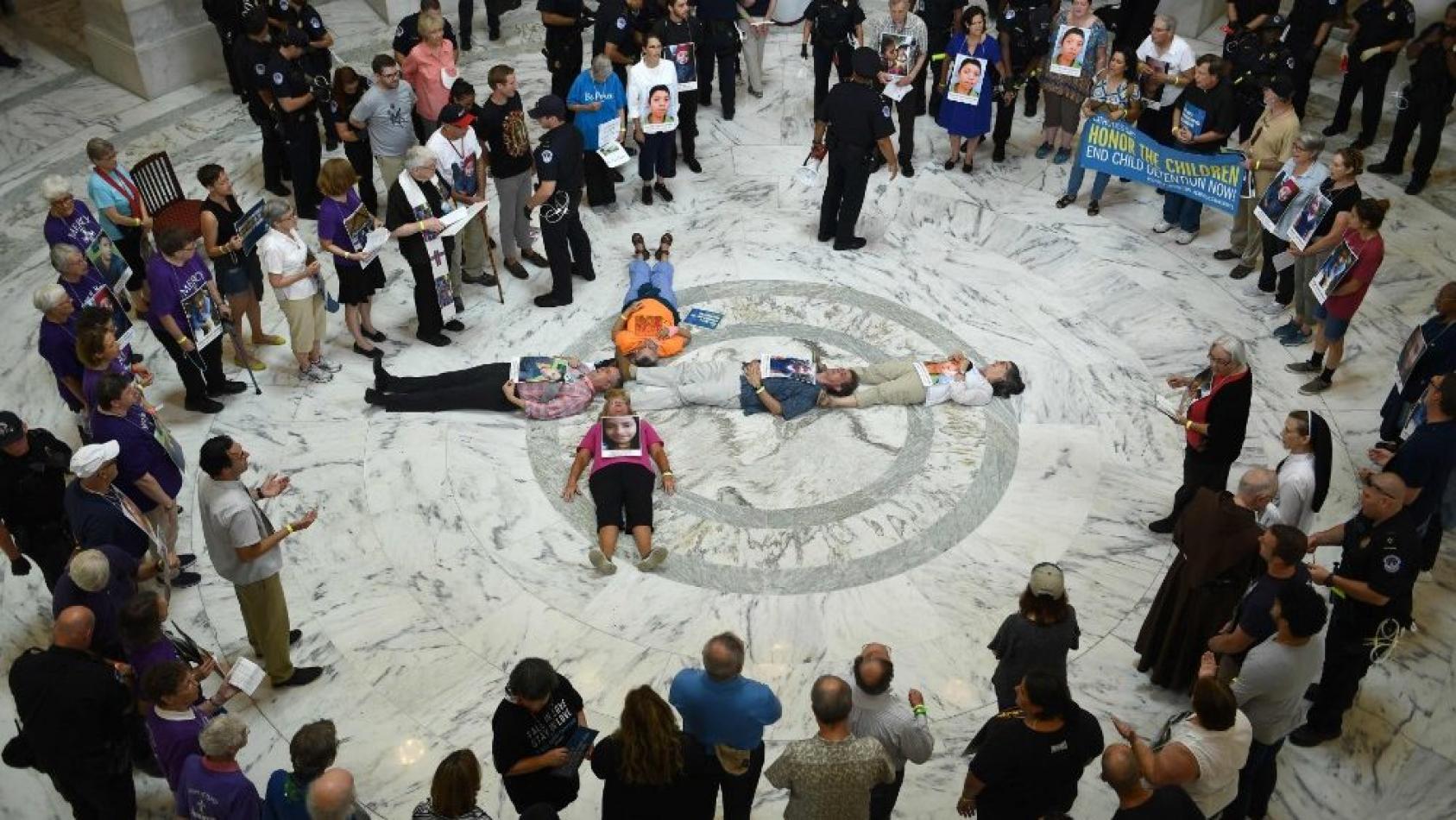 Friday, July 19, 2019
They prayed on the outside lawn, listened to the testimonials of migrants afraid of losing their children, and read the messages of the bishops who arrived in support of the demonstration of civil disobedience promoted, inter alia, by the Columban Center for Advocacy and Outreach, the Conference of Major Superiors of Men, the Jesuit Conference of Canada and the United States, the Leadership Conference of Women Religious and Pax Christi USA, to protest against the immigration policies enacted at the border, especially with regard to children... [SIR] 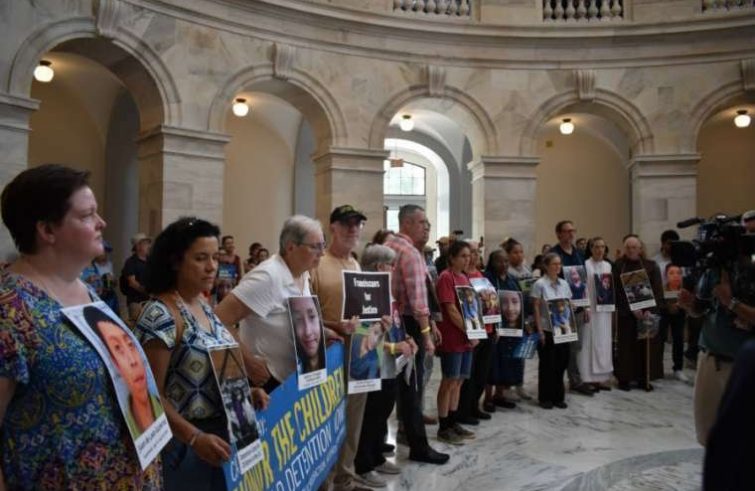 They entered the Senate rotunda holding photographs of migrant children who have died in federal immigration custody. Shortly before, they had prayed on the outside lawn, listened to testimonies of migrants who fear losing their children and read the messages of the bishops who arrived in support of this demonstration of civil disobedience promoted, inter alia, by the Columban Center for Advocacy and Outreach, the Conference of Major Superiors of Men, the Jesuit Conference of Canada and the United States, the Leadership Conference of Women Religious and Pax Christi USA, to protest against the immigration policies enacted at the border, especially with regard to children.

Five activists, disregarding the warnings of the police officers, lay down on the floor of the Senate building on Capitol Hill forming the shape of a cross with their bodies and recited the names of the young victims: “Darlyn, Jakelin, Felipe, Juan, Wilmer, Carlos.”

Police were called to intervene and arrested them while they lay on the ground and chanted. They were carried away in handcuffs, along with nuns, parish members and other Catholic leaders as they recited the Hail Mary. Seventy Catholics were arrested, including Sister Pat Murphy, a 90-year old nun who works with migrants and refugees in Chicago, organizing weekly prayer vigils outside the immigration agency. “The ways in which migrants are being treated should spark of the outrage of all believers”, said Sister Pat, echoed by Sister Ann Scholz, a member of the Leadership Conference of Women Religious: “We are here because the Gospel tells us we should take action and we are outraged at the awful treatment of families and of children in particular.” “Such treatment cannot continue, not in our name”, the nun exclaimed.

Thursday’s demonstration is just one of many protests staged since last Saturday in cities across the country: the announcement of the Federal Immigration and Customs Enforcement agency ( ICE) of planned raids targeting migrants sparked off the protests of hundreds of people of all faiths who are jointly calling for a radical change in immigration laws and a halt to the detainment of migrants in detention facilities on the Mexican border. The images of migrant children separated from their families and kept in inhumane and unhealthy fence cages, have shocked the whole nation. 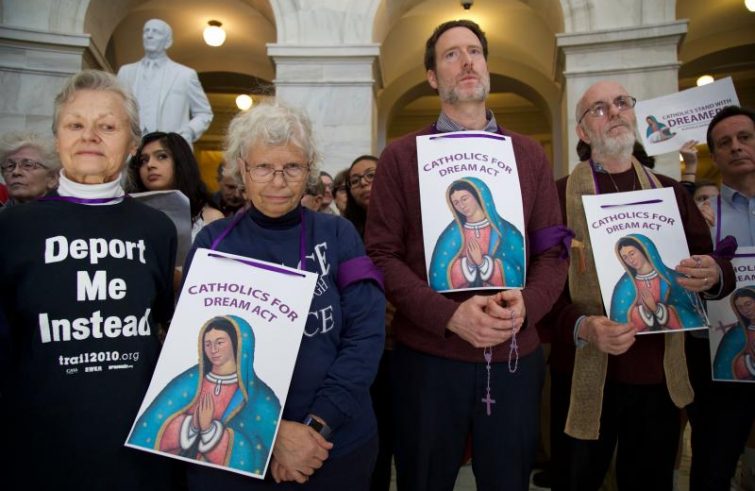 The protests were dubbed “Lights for Liberty”, and took as their emblem the Statue of Liberty, paradigm of the reception of migrants into the United States. Meanwhile, the feared deportations planned for July 15 were more limited in scope than the President had claimed, and many Church dignitaries openly stated that the purpose of such actions was to intimidate and scare migrant communities, acting as a deterrent for anyone wishing to enter the United States in the future.

In Foley Square, overlooking the immigration courts in the lower part of Manhattan, Christian Pastor Rev. Kaji Douša quoted the Gospel of Matthew on doing the least with a message “for anyone who claims to be a Christian and ignores that Jesus was a refugee and an immigrant you need to know that there are eternal consequences to consider.” Rev. Douša denounced that after participating in a meeting of faith leaders in Tijuana, Mexico, she was detained for several hours by federal immigration officers and interrogated about her work both on the border and in New York City. Rev Douša has been put on a watch list as a result of her commitment and her decisions with regard to the protection of migrants.

After celebrating Mass in the New York City’s chapel at the Church of St. Frances Xavier Cabrini, patroness of immigrants, Cardinal Timothy M. Dolan decried the negative attitude towards refugees and asylum-seekers in a country that is by definition “a nation of immigrants.” Dolan said he is “saddened” to admit that many opposed Mother Cabrinin’s work in favour of Italian refugees, and the same is happening today, where “in many places hate and malice are directed against immigrants and refugees” despite the fact that Catholic parishes, schools, and charities carry out exemplary relief and assistance services. 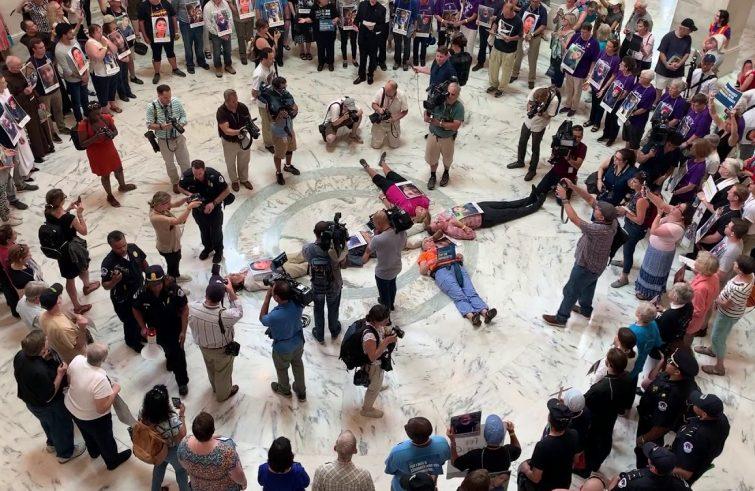 In Texas, Brownsville Bishop Daniel Flores declared: “the threat of mass deportation raids is psychologically cruel to families and children. The actual separation of parents from their children without even a chance for a court appearance is simply reprehensible. Laws ought to treat families and children differently than drug lords.”

Christopher Kerr, executive director of the Ignatian Solidarity Network, stated that groups and parishes affiliated with the Jesuits in ministering to migrants have handed out emergency instructions during Masses in Spanish, while many parishes have declared themselves “sanctuaries” to ensure the safety of families seeking shelter, and committed to hosting immigrant families. Many more are providing “know your rights” training, connecting parishioners to legal services and supporting rallies and protests.

“If the Trump administration is going to persist in terror tactics against hard working immigrants and their families, then Catholics will continue to act, give public witness and condemn this social sin,” said Simone Campbell, executive director of Network Lobby for Catholic Social Justice. Campbell, along with Franciscans and Jesuits, considers yesterday’s civil disobedience one of the first public awareness and advocacy protests directed at Congress.
[Maddalena Maltese, from New York – SIR]