Home
Provinzen
Moçambique – (Notícias)
The Pope in Mozambique: the “courage of peace” to “write a new page of history”

The Pope in Mozambique: the “courage of peace” to “write a new page of history” 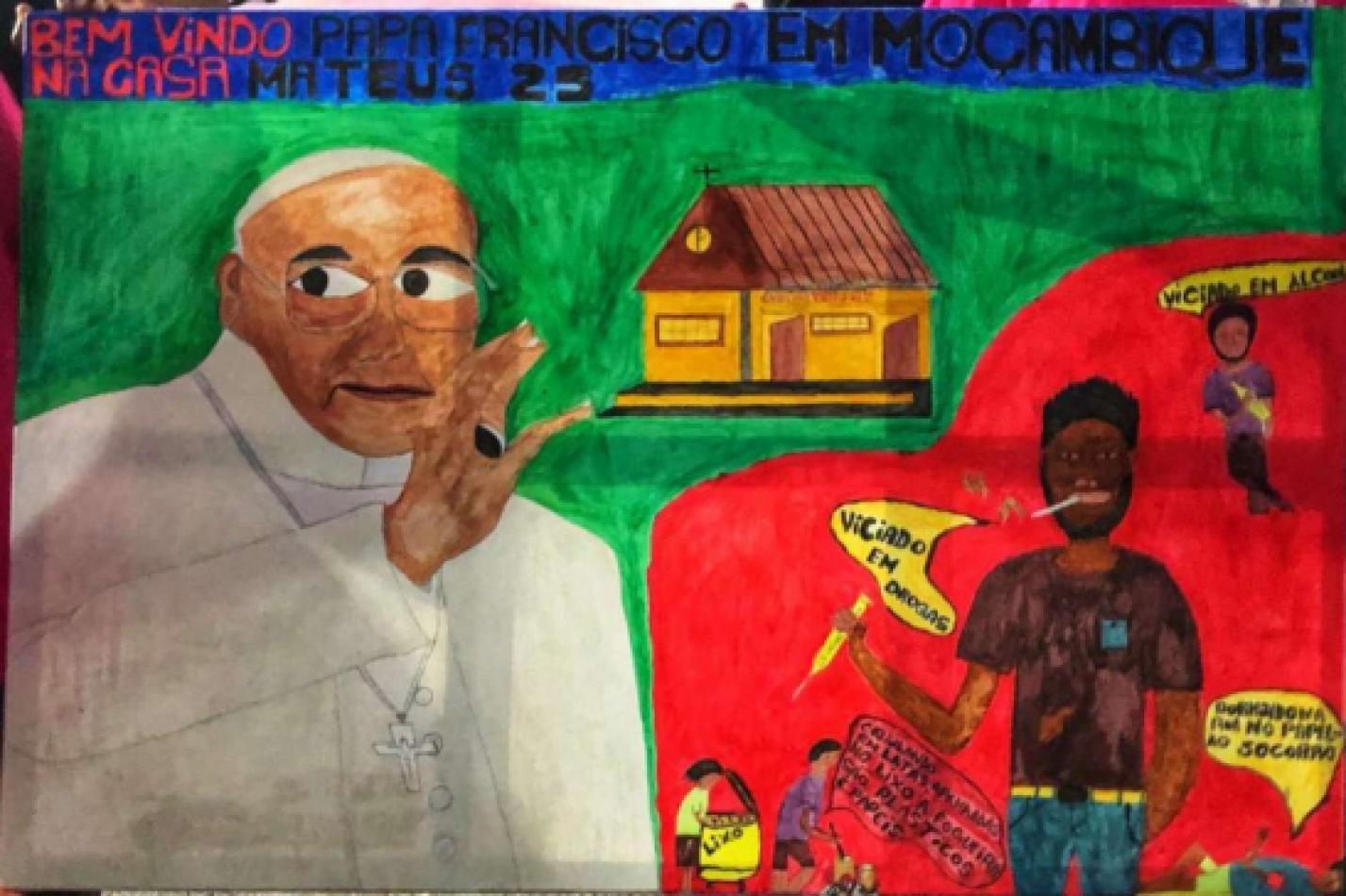 Saturday, September 7, 2019
"Reconciliation” is the key-word of the apostolic visit to Mozambique, the first leg of the Pope’s 31st international apostolic journey that includes Madagascar and Mauritius. Already in his first speech Francis called for the “courage of peace”, quoting from Saint John Paul II and Paul VI. Sixty thousand people attended the closing Mass in Maputo, welcoming the Pope with songs and dances in spite of the rain. [M.Michela Nicolai - SIR]

“Reconciliation.” When the Pope arrives at the Maxaquene Stadium in Maputo, venue of the inter-faith meeting with young people, this word – and not the spelled out noun, as usually happens – is spoken in Portuguese. Francis invites the festive crowd to repeat it with him, encouraging young people to “write a new page in the history” of Mozambique, to move beyond the agreement signed a month ago that put a decisive end to a fratricidal war, after the historic agreement signed in 1992 thanks to the mediation of the Community of Sant’Egidio. “No to violence, and yes to peace!”: these are the opening lines of the first speech to authorities in Maputo, preceded by expressions of solidarity with the population struck by cyclones in the past two months. The Pope quotes from Saint John Paul II – who visited Mozambique 31 years ago – and calls for a “courageous step on the path of peace.” “Genuine courage”, the Pope underlines, “not the courage of brute force and violence, but one expressed concretely in the tireless pursuit of the common good”, a quote from Paul VI, the first Pope to set foot on the African continent 50 years ago. Reconciliation is also the main theme of the Mass in the Zimpeto stadium, on the northern outskirts of Maputo, the last public event of the two day-visit to Mozambique, preceding the next visits to Madagascar and Mauritius. In front of approximately 60,000 people who welcome him with dances and songs despite the rain – a real blessing in this corner of the world – Francis exclaims: “You have a right to peace”, since no country can build a future on the basis of vengeance and hatred.

“You have experienced suffering, sorrow and affliction, but you have refused to let human relationships be governed by vengeance or repression, or to allow hatred and violence to have the final word”, is the Pope’s homage to the tormented history of Mozambique, a country of 30 million inhabitants today, amongst the poorest in the world. Peace, he says in the address to authorities, is not merely absence of war but a tireless commitment

“to recognize, protect and concretely restore the dignity, so often overlooked or ignored, of our brothers and sisters, so that they can see themselves as the principal protagonists of the destiny of their nation.” Peace is also the care of our common home, Francis underlines, pointing at “a tendency towards pillaging and exfoliation.” “No to violence that brings destruction, yes to peace and to reconciliation.” The guiding line: “May no one feel abandoned”, especially the young who make up more than half of the overall population. The Pope addresses them during the interreligious meeting in Maputo:

“Find ways of building social friendship”, is the invitation to make them feel an active part of their country’s destiny. “Don’t be afraid to make mistakes!”, is the message directed to each one of them: “We can make a thousand mistakes, but we must never fall into the trap of giving up because things did not go well at first. The worst mistake would be to let worrying make you abandon your dreams of a better country.” Sport “teaches us to persevere in our dreams!”, the Pope says recalling football player Eusebio da Silva and athlete Maria Mutola. “It is no good to give up”, Francis reiterates, highlighting “the gesture of the outstretched hand.”

The people of Mozambique are a “heroic people”, “a people that has experienced suffering yet keeps hope alive”.

It’s the outline traced during the meeting with the clergy in the cathedral of Maputo. “We should not be running for our own benefit”, Francis affirms: “our weariness should be related to our ability to show compassion.” No to “spiritual worldliness” and to “fear that paralyzes” exposing us to the risk of becoming “mummified.”
“The Church in Mozambique is invited to be the Church of the Visitation; it cannot be part of the problem of rivalry, disrespect and division that pits some against others, but instead a door to solutions, a space where respect, interchange and dialogue are possible.”
[M.Michela Nicolai - SIR]