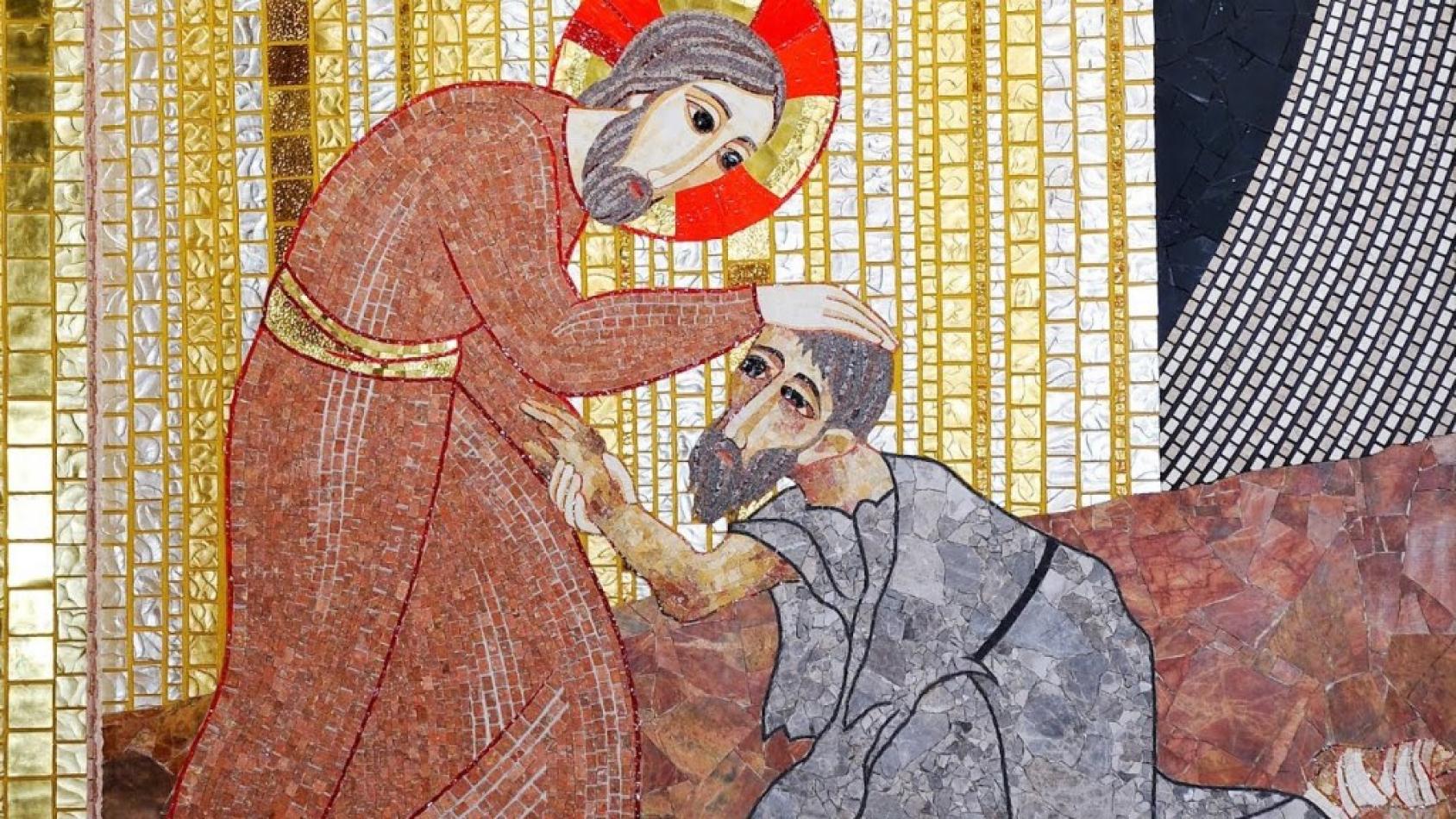 It was said in the time of Jesus: “Four categories of persons are treated as dead: the poor, the leper, the blind, and the childless.” The lepers could not approach the village and places where they used to live, as they were considered impure, like the cemeteries. Some rabbis declared that if they had met a leper they would have stoned him and shout at him: “Return to your place and do not contaminate other people.” All diseases were considered a punishment for sins but leprosy was the symbol of sin itself. (...) 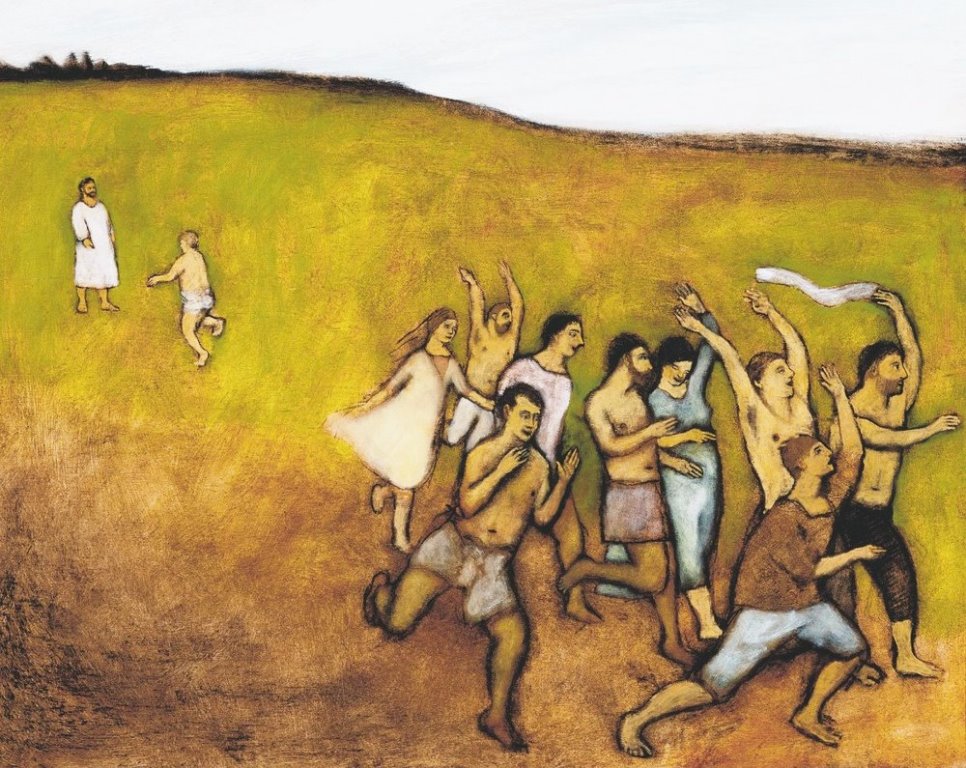 It was said in the time of Jesus: “Four categories of persons are treated as dead: the poor, the leper, the blind, and the childless.”

The lepers could not approach the village and places where they used to live, as they were considered impure, like the cemeteries. Some rabbis declared that if they had met a leper they would have stoned him and shout at him: “Return to your place and do not contaminate other people.” All diseases were considered a punishment for sins but leprosy was the symbol of sin itself. God used it—they said—to strike above all persons who were envious, arrogant, thieves, responsible for murders, making false oaths, and incestuous. The healing of leprosy was a miracle comparable to the resurrection of a dead person. Only the Lord could cure it. But first, they have to atone for all the sins that had caused it.

The lepers felt rejected by all: by people and by God.

Since these were the customs and mentality, one understands the reason why the ten lepers stopped at a distance and shouted from afar: “Jesus, teacher, have mercy on us” (v. 13).

It should be noted: they do not ask him for healing but only for compassion, that he be moved by their desperate condition. Perhaps they are waiting only for alms. As  soon as he sees them Jesus says: “Go and present yourselves to the priests” (v.14). The ten lepers therefore go and along the way they are cured.

There is something special in this miracle: the healing does not happen immediately. The leprosy disappears later, while the lepers are along the way. This makes the episode similar to the story in the First Reading. Naaman is healed after departing from Elisha.

Seeing himself cured, one of the ten lepers turns back and finding the Master, falls on his knees to thank him.

He is a Samaritan. Jesus marvels that only he, a stranger, felt the need to give glory to God. He lifts him up and says to him: “Rise up and go; your faith has saved you.”

We notice foremost that the story does not speak of one but ten lepers. Luke does not underline this particular just for the record. The number ten in the Bible has a symbolic value: it indicates the totality (the hands have ten fingers). The lepers of the Gospel represent therefore all the people, the entire humanity far away from God. All of us—Luke wants to tell us—are lepers and we need to encounter Jesus. No one is pure; we all carry on our skins signs of death that only the word of Christ can cure.

Whoever is not aware of one’s own condition of being a sinner ends up considering oneself righteous and with the duty to condemn others to the margins. God has not created two worlds: one for the good ones and the other for the wicked ones but—be it in the present or in the future—a unique world wherein he calls all his children to live together, all sinners are saved by his love.

The same message is contained in a second paradox: leprosy puts together Jews and Samaritans, unites persons who, while in good health, despise, hate, and fight each other. The awareness of common disgrace and suffering gathers them in friendship and solidarity.

And this is exactly what happens in the spiritual field: if one considers himself just and perfect, inevitably one raises the barriers and fences for self-protection from “lepers.” Whoever realizes himself/herself as a leper will not feel superior, will not judge, not distance himself/herself, not look down but will be in solidarity in good and in bad with the brothers/sisters.

Jesus is not afraid to be considered a sinner. He is not a “Pharisee” who distances himself from the impure. At the end of the story of the healed leper, the evangelist Mark notes that, after stretching his hand and curing him, he could no longer enter publicly in a city but stayed outside in deserted places (Mk 1:45). Jesus knew that touching the leper he made a gesture that would make him unclean and for that, he had to distance himself from the society of the pure. He touched him all the same because he chose to share the condition of the marginalized, excluded, and outcasts.

The third paradox has to do with solidarity among people: the ten lepers do not try to save each on his own. They go together in search of Jesus. Their common prayer is: “Jesus, Teacher, you who understand our condition, have mercy on us.”

This prayer is a condemnation of the pseudo-spiritual, individualistic, intimate invocation preached by those searching for “salvation of one’s own soul.” Salvation can be reached only together with the brothers/sisters. The great personages of the Bible are always in solidarity with their people. Azariah, a young man of upright and exemplary life, prays: “For we have sinned and acted perversely by deserting you. We have sinned gravely in everything and have not listened to your commandments. We have not observed them and we have not fulfilled everything you commanded us for our good” (Dn 3:29-30). Moses turns to the Lord saying: “And now please forgive their sins … if not blot me out of the book you have written” (Ex 32:32). Paul even pronounces the paradoxical phrase: “I even would desire that I myself suffer the curse of being cut off from Christ, instead of my brethren: I mean my own people, my kin” (Rom 9:3).

In paradise, no one, not even God, will be happy until the last human being is liberated from “leprosy” which puts them far away from the Lord and from the brothers/sisters.

The fourth paradox of the story is an invitation to reflect on the salvific efficacy of the word pronounced by Jesus. The lepers invoke him from a distance (vv. 11-12). They cannot go near him. Will he manage to perceive their desperate cry? Will he do something in their favor or will the distance block him to intervene? These are the doubts, the fears which harass the ten lepers but also the Christians of Luke’s community. They do not have the fortune to materially approach the Teacher; and they doubt, which is also another obstacle.

We are convinced that when Jesus was near, when he was walking along the roads of Palestine, it was possible to approach him, touch him and talk to him. He paid attention to all, listening to every request for help and with his word, cured every disease. But now that he is no longer visible in this world and “far away”: does he incline his ears to us? Is he still interested in our “leprosy?” Is he able to save also “from a distance?”

Luke’s answer to his Christians and to us is simple: It is not the distance that can impede our prayers of arriving to him. There are no desperate situations that, with his word, even pronounced “from a distance” he could not solve. The word that heals every kind of “leprosy” continues to be announced today and its efficacy remains intact. It is enough to trust in him, like that Samaritan leper to whom Jesus acknowledges: “Your faith has saved you” (v. 19).

The ten lepers were cured along the way. Why doesn’t Jesus heal them immediately—as he always does—and not send them to the priests afterward for the prescribed verification of the law? Does he want to put their gratitude to the test?

A theological message is certainly tied to this detail of the episode. In the New Testament, Christian life is compared to an “itinerary,” a long and tiresome journey. The healing of “leprosy” which makes us feel so far from God, rejected by the brothers/sisters and despised by our own conscience—we know and verify it each day—does not happen all at once. It comes progressively and requires a whole life. Jesus invites us to walk this way with patience, serenity, optimism and guided at every step by his word. Along the way, those who have faith will verify the sensation. They will gradually see “his skin becoming as that of a child’s” as it happened to Naaman.

We have arrived at the most difficult point of the story: why only one returned to give thanks? Why did Jesus complain about the behavior of the other nine when he himself ordered them to go and show themselves to the priests? Who disobeyed? Was it not perhaps the Samaritan?

Let us assume that the other nine returned later to offer thanks. They first went to the priests to hasten the “formalities” of verification and to be re-admitted to the community life. Then they ran back to their families and surely returned to Jesus. This is the only logical reconstruction of the facts. And why did Jesus lament?

He does not speak of thanksgiving; he is not saddened because he verified a lack of gratitude. It says that only the Samaritan gave glory to God, that is, the only one who understood immediately that the salvation of God comes to people through Christ. He is the only one who acknowledged not only the good received but also the intermediary chosen by God to communicate his gifts. He desired to proclaim it before all, his gratitude and discovery. The others were not bad, only that they were not immediately aware of the novelty. They continued to follow the traditional way: they thought that one arrived to God through ancient religious practices, through the priests of the temple.

Jesus remains surprised that his fellow Jews, even though used to reading the Sacred Scriptures and educated by the prophets, were preceded by a Samaritan in acknowledging the Messiah of God.

The fact of the healing of the ten lepers is reread by Luke as a parable, as an image of what happened in his time: the heretics, pagans, and sinners were the first ones to recognize in Jesus the mediator of God’s salvation.