Top 5 takeaways from the Amazon synod 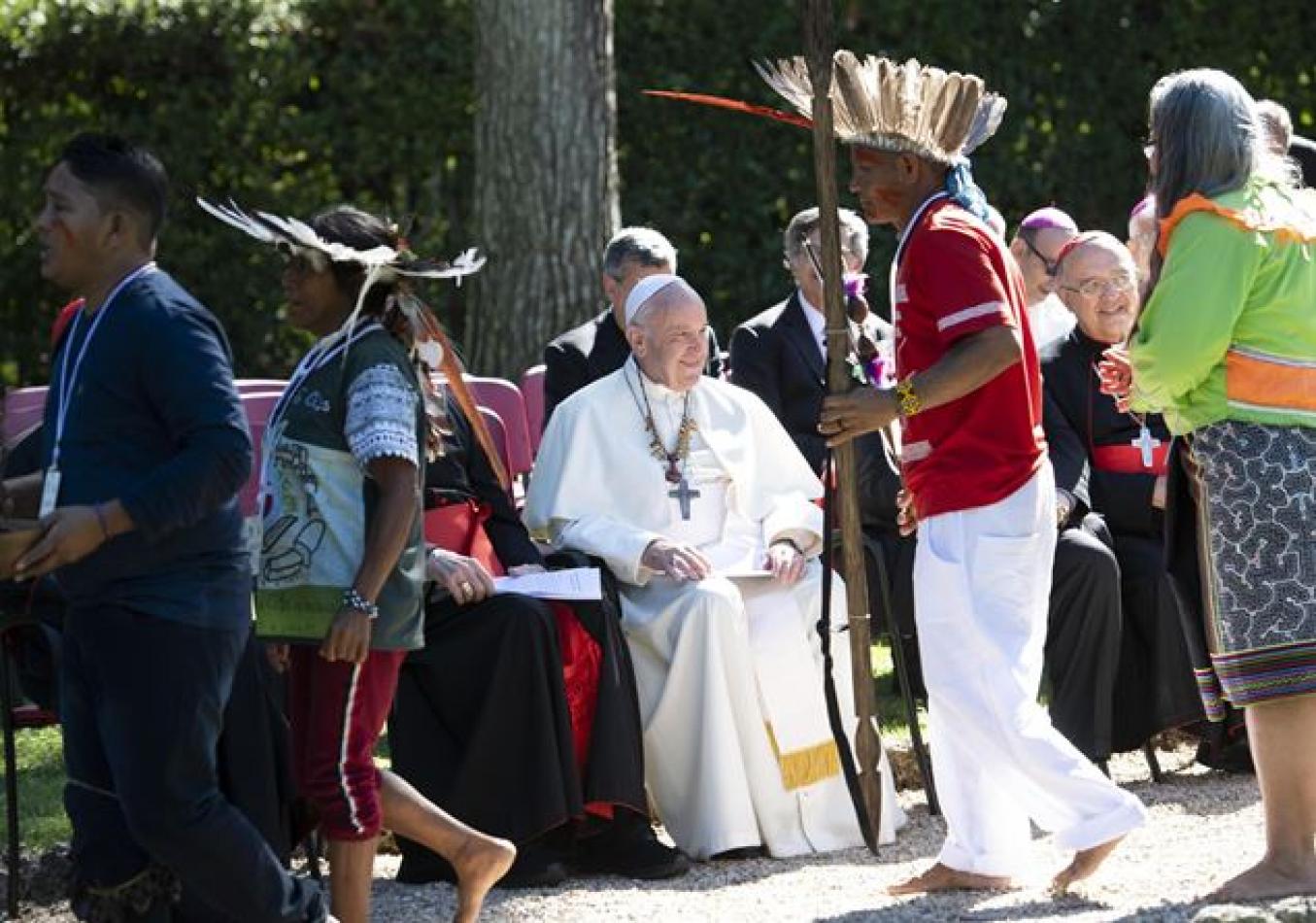 Thursday, November 7, 2019
The three-week Special Assembly of the Synod of Bishops for the Pan-Amazonian Region, on the theme, “Amazonia: New Paths for the Church and for Integral Ecology,” concluded on Oct. 27 in Rome. Here are five key takeaways from the synod.

The three-week Special Assembly of the Synod of Bishops for the Pan-Amazonian Region, on the theme, “Amazonia: New Paths for the Church and for Integral Ecology,” concluded on Oct. 27 in Rome. Here are five key takeaways from the synod.

1. The synod was prophetic in placing Amazonian and indigenous communities at the center of the synod process and for making a clear option for these communities over foreign economic interests.

In the two-year preparatory process for the synod, the Pan-Amazonian Ecclesial Network, or REPAM, coordinated about 300 listening sessions in the Amazonian region. About 22,000 people were directly involved in the territorial assemblies and smaller dialogue groups, and another 65,000 people participated in parish groups.

At the synod itself, there were 16 representatives of different Amazonian indigenous communities who shared their faith and cultural heritage with the synod and delivered compelling personal testimonies about the negative effects of climate change and extractive activities. Several of these indigenous leaders appeared at Vatican press briefings during the synod, speaking passionately about what is at stake for their communities.

On Oct. 16, Yesica Patiachi Tayori, a bilingual teacher and member of the indigenous pastoral team in Puerto Maldonado, Peru, described the decimation of her people, the Harakbut indigenous community, used as cheap labor and murdered by the thousands after the invasion of their land by rubber companies.

A few decades ago the Harakbut were as many as 50,000; they have been reduced to as few as 1,000 people today. Ms. Tayori said she made a direct appeal to Pope Francis to bring their story to the international level so that her people, faced with continuing external threats, do not go extinct.

At the synod, “the periphery speaks from the center with the awareness that its experience is heard as a prophetic voice for the whole church,” said Antonio Spadaro, S.J., a synod member and the editor in chief of La Civiltà Cattolica, in an interview with Vatican News. “And, precisely for this, it is judged by some as disturbing.”

2. At the heart of the synod process and the final document is conversion at the pastoral, cultural, ecological and synodal levels.

Cardinal Michael Czerny, S.J., a special secretary for the synod, presenting the final document at a Vatican briefing on Oct. 26, underlined the synod’s call for these four conversions (pastoral, cultural, ecological and synodal) because, he said, there are “no new paths” and “no real change” without these conversions.

“With the Amazon burning,” he said, “many more people are realizing that things have to change. We cannot keep repeating old responses to urgent problems and expect to get better results.” Referring to the urgent need for ecological conversion at both the personal and communal levels, the cardinal said the ecological crisis is so deep that if we don’t change, “we’re not going to make it.”

Several synod participants pointedly challenged Europeans and North Americans to examine and change their lifestyles and engage in political action in solidarity with Amazonian communities who bear the burden of climate change and the activities of multinational companies involved in mining and deforestation.

People who live in Europe and North America have a “heightened responsibility” for political action in support of indigenous communities since “we live from the benefits of this tragic exploitation in most parts of the world,” said Josianne Gauthier at a Vatican briefing on Oct. 14.

Ms. Gauthier, a Canadian and the general secretary of CIDSE, an international alliance of Catholic solidarity organizations, said her role at the synod was “to listen to voices we don’t have direct access to all the time” and to consider how to support indigenous communities after the synod through “political pressure” in international political instruments.

3. This special synod—the first Synod of Bishops to be organized around a distinct ecological territory—sought to practice what it preached regarding “integral ecology” and care for our common home.

In this regard, synod organizers undertook several important measures: implementing an online registration process in order to avoid printing paper; utilizing bags, pens and cups made with biodegradable materials rather than plastics; and most significantly, to be a “carbon neutral” synod, the organizers offset the emissions spent to get more than 200 participants from South America to Rome—estimated at 572,809 kilograms of carbon dioxide—with the purchase of 50 hectares (123 acres) of new growth forest in the Amazon.

“The synod is a son, a daughter, of ‘Laudato Si’,’” the encyclical published by Pope Francis in 2015, said Mauricio López, the executive secretary of the Pan-Amazonian Ecclesial Network, inan interview with America.

“The synod is not the end of the road,” Mr. López said, “but the beginning of a new stage for the church in the Amazon, planting the seeds of metanoia, of radical conversion, from within, at this kairos moment.”

4. All 120 paragraphs of the synod’s final document  were approved with the necessary two-thirds majority vote, including proposals related to married priests and women deacons.

Even though these highly debated proposals had the most votes against them, the synod was able to find language to satisfy large majorities of voting members. It is a remarkable accomplishment, considering that even discussion about such questions was strongly discouraged in previous papacies.

In the paragraph on married priests, the synod noted that many Amazonian communities go for a year or more without the Eucharist and other sacraments because of a serious shortage of priests; that celibacy is a “gift from God” but also “not required by the very nature of the priesthood”; and that criteria should be established for the priestly ordination of “suitable and esteemed men of the community, who have had a fruitful permanent diaconate.” The bishops supported the proposal, 128 to 41.

In the paragraph on women deacons, the synod acknowledged that in “a large number” of the consultations carried out in the Amazon, “the permanent diaconate for women was requested,” adding that the theme was also important during the synod. Then, referring to the Study Commission on the Diaconate of Women that Pope Francis had established in 2016, the synod expressed its desire “to share our experiences and reflections with the Commission and await its results.” This paragraph received the support of 137 bishops, with 30 against.

In his remarks at the synod’s closing session, Pope Francis decided to immediately respond to this proposal, assuring the 265 synod participants that he would reconvene the commission, perhaps with new members. “I take up the challenge” for the synod “to be heard” on this topic, the pope said, as the synod hall responded with applause.

Several bishops and other participants spoke strongly in favor of women deacons throughout the synod, but perhaps the most compelling case was made by Bishop Evaristo Pascoal Spengler, O.F.M., of Marajó, Brazil, on the eve of the highly anticipated voting on the final document.

At the synod’s conclusion, Bishop Robert McElroy of San Diego, a papal appointee to the Amazon synod, told America in an interview, “It was clear to me that the majority of bishops at the synod were in favor of recommending women to be in the diaconate.”

The bishop also said the pope’s closing comments “certainly signaled” that the papal commission would have “a new perspective and new people” looking at the possibility of women deacons “to see is there a way that this can be accomplished.”

5. Since his election as pope in March 2013, Pope Francis has transformed the Synod of Bishops into a privileged place of discernment and conversion.

Through the enhanced preparatory process, the increased participation of lay women and men as experts and auditors, the encouragement to speak freely on controversial topics and the rich discussions in small groups, Pope Francis has ensured that the synod is a place of encounter, listening and dialogue with others and with the Spirit, in which everyone is invited to let go of expectations and be open to conversion.

The synod is “not a discussion, not a parliament,” but there is “a spiritual dynamic,” said Giacomo Costa, S.J., the synod’s secretary for information, at a Vatican press briefing on Oct. 16. The biblical image, he said, is “the blind man who throws away his cloak to go to God,” and for the synod it means “to leave behind the safety of your arguments.”

The synod “is a path of discernment” that must “leave space for the Spirit,” Father Costa said.

On the 50th anniversary of the Synod of Bishops in 2015, Pope Francis said that God expects the church to follow the “path of synodality” in the third millennium.

Synodality refers to the active participation of the whole People of God in the life and mission of the church, according to the International Theological Commission. It means embracing the diversity of charisms, vocations and ministries of God’s people.

Pope Francis has called upon the church to become more synodal at every level: bishops and priests being close to the people, walking together, and having “the smell of the sheep”; greater collaboration at the diocesan and regional levels; and the global Synod of Bishops becoming an instrument of encounter, dialogue and conversion.

In his closing remarks at the Amazon synod, Pope Francis said that three topics received a majority vote as possible subjects for the next synod, and one of them is “synodality.” The pope said he does not know if the topic will be chosen—he is still “reflecting and thinking”—“but I can certainly say that we have walked a lot and we still have to walk more on this path of synodality.”
Luke Hansen, S.J.
November 11, 2019
https://www.americamagazine.org