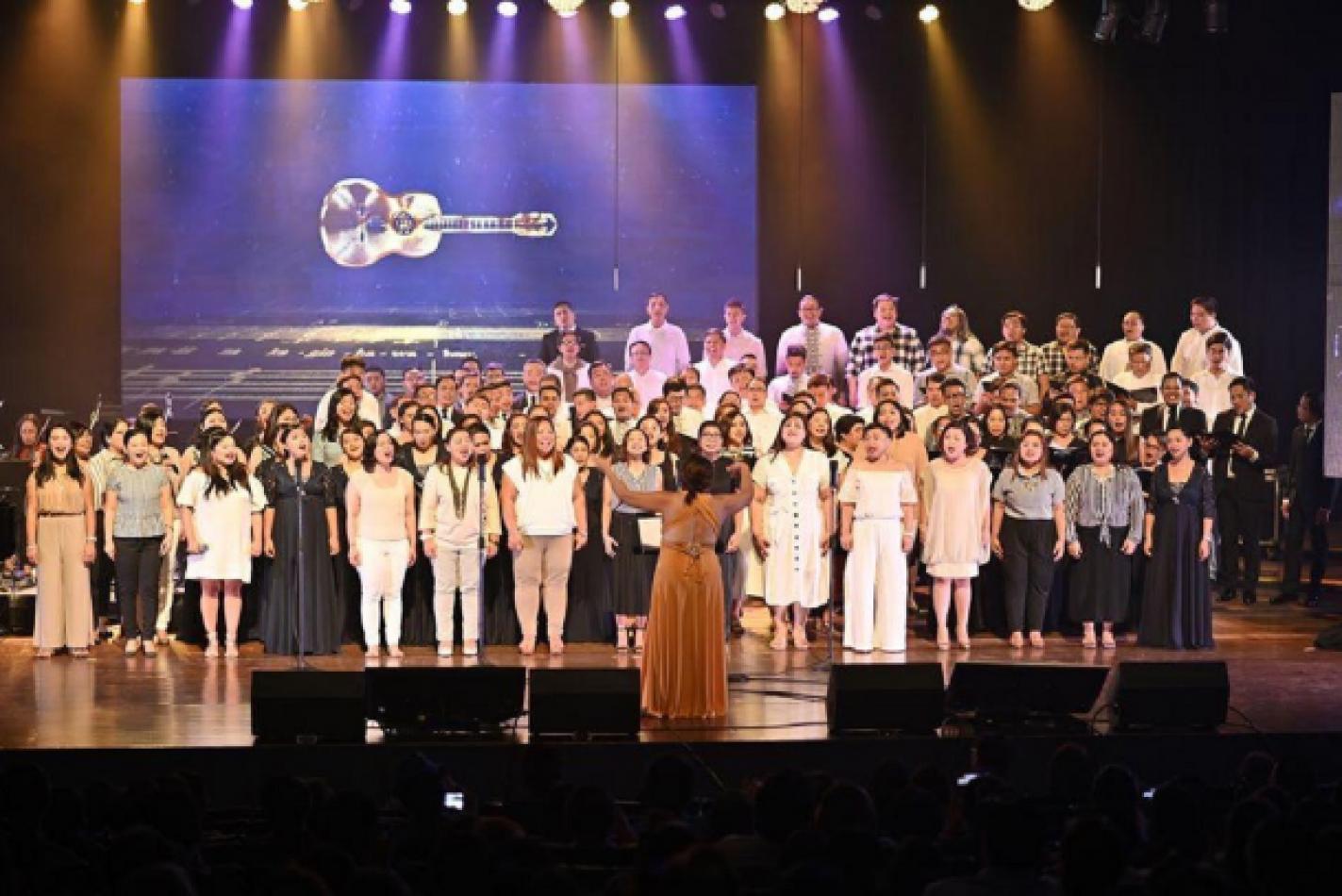 Saturday, May 16, 2020
Choirs and musicians of the Jesuit Music Ministry unite to boost Catholic morale. In the picture (courtesy of Lester Mendiola): Members of several Jesuit Music Ministry choirs perform at a concert called “Ginintuan” to mark 50 years of Jesuit music in this file photo.

Jesuit Communications, the Philippine Jesuits’ media arm, has released an online music video featuring Catholic choirs and musicians performing a composition by Father Eduardo Hontiveros, considered the father of Philippine liturgical music. The video, called a “Quarantune” because it was made during quarantine restrictions, was produced to boost morale among Catholics in the face of the hardship and grief caused by the Covid-19 pandemic.

The late Jesuit priest wrote liturgical songs in Tagalog in response to the Second Vatican Council’s call for inculturation of the liturgy. Dioceses across the country have also translated his compositions into the various dialects spoken in the Philippines for local Masses and liturgical celebrations. Production group Jesuit Music Ministry said the project was the first collaborative effort of all choirs and musicians under their ministry. The performers included seven choirs and a group of musicians founded by the Jesuits.

The group performed Hontiveros’ song “Pananagutan” to remind Filipino Catholics of their unending love and care for one another, especially the poor. “We produced the Quarantune because we would like to continue our mission of evangelization through music despite the pandemic. Our work for evangelization doesn’t stop and perhaps it is needed more now,” said Lester Mendiola, director of the Jesuit Music Ministry.

Hope is the message of the video which the group wanted to spread to all Filipino Catholics, he said. Jesuit music has long been a part of Filipino culture and faith. During Pope Francis’ visit to the Philippines in 2015, compositions by Jesuit Fathers Manoling Francisco and Arnel Aquino were performed at Masses and other liturgical gatherings. Jesuit Communications is also the producer of a Sunday television catechism program featuring Cardinal Luis Antonio Tagle.

The prefect of the Congregation for the Evangelization of Peoples, now based at the Vatican in Rome, continues to air his reflections to the Filipino people in the program. Now that TV productions and recordings have been suspended due to quarantine rules, Mendiola said home recordings have been their alternative way of reaching out to Catholics who need inspiration through “prayers wrapped in songs.” Meanwhile, Calbayog Diocese in Samar province has appealed for aid to help families evacuated to churches to escape Typhoon Ambo.

The typhoon, also known as Vongfong, struck Samar around noon on April 14, leaving hundreds of families homeless. Concerns have also been raised about maintaining social distancing in evacuation centers. “We ask our generous donors to please help our fellow Filipinos whose homes were destroyed by Ambo. Let us first see that they are fed. Then later, let us together build their homes,” the diocese said in the appeal.