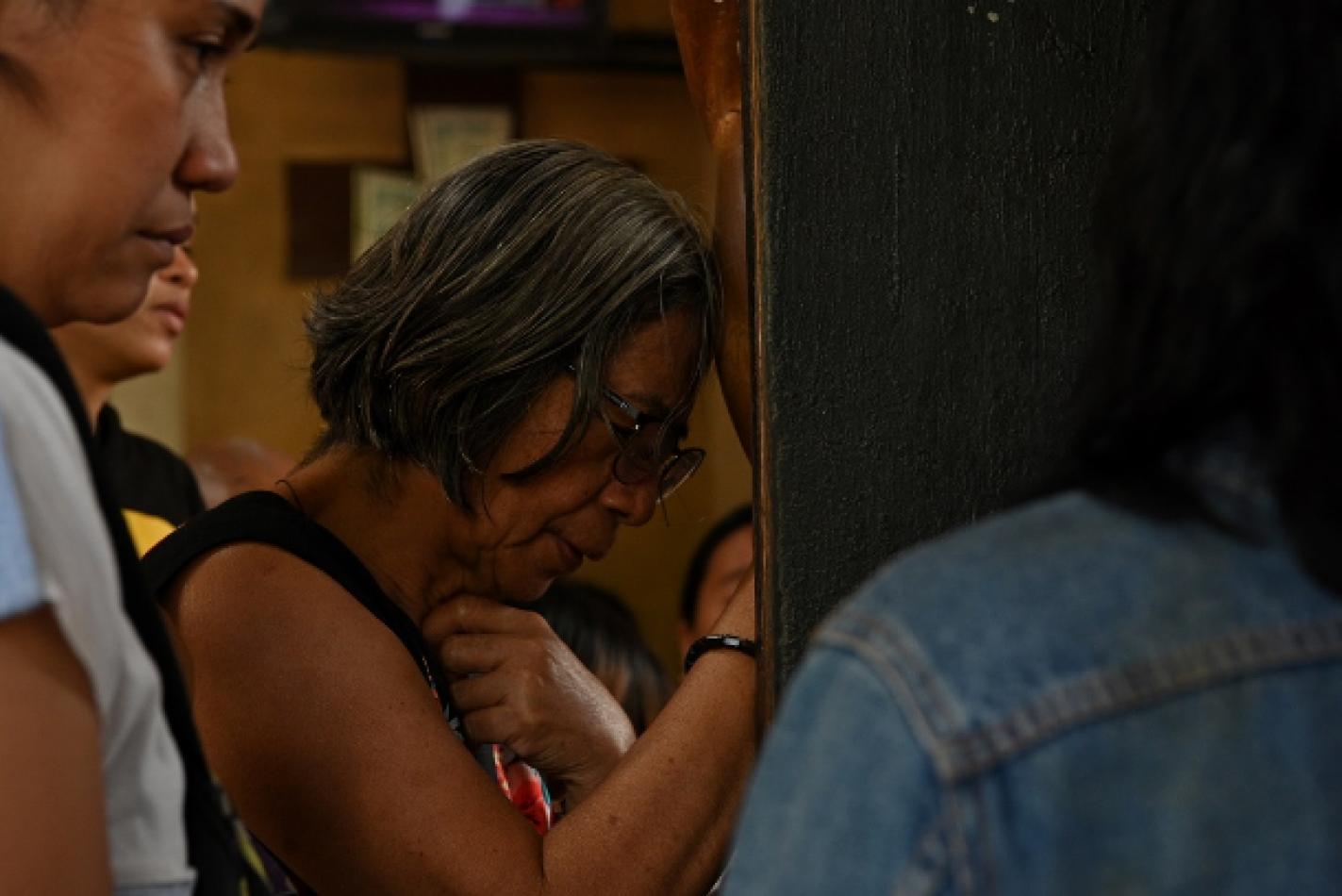 Thursday, June 11, 2020
Philippine diocese marks two years since Father Richmond Nilo was gunned down while preparing for Mass. In the picture: Catholics pray in front of a cross at a Manila church in this file photo. The Catholic Church in the Philippines has renewed calls for authorities to bring the killers of Father Richmond Nilo to justice. [Joseph Peter Calleja –
UCA News. Photo: Ted Aljibe/AFP].

Catholic bishops have commemorated the second anniversary of the murder of a Catholic priest in the northern Philippines by calling for those responsible to be brought to justice. Father Richmond Nilo, priest of St. Vincent Ferrer parish in Nueva Ecija, northern Luzon, was gunned down in a chapel while preparing for Mass on June 10, 2018.

Unidentified gunmen shot him seven times in front of 70 parishioners. Since the murder, the motive for which is still unclear, one suspect has been arrested and another seven suspects remain at large, according to police. The lack of progress prompted renewed calls for justice for the slain priest, including from the Catholic Bishops’ Conference of the Philippines (CBCP).

“We make our appeal once again to the police authorities to act swiftly in the investigation and to go after the perpetrators of this heinous crime and bring them to justice,” conference president Archbishop Romulo Valles said on June 10. Bishop Sofronio Bancud of Cabanatuan said earlier that no priest deserved to be killed with utter brutality, disrespect and impunity. “To kill a priest, for whatever purpose, is not only unchristian and inhuman, it is also un-Filipino,” said Bishop Bancud, the prelate of the diocese where Father Nilo was murdered.

Cabanatuan Diocese also demanded justice for the priest. “Today [June 10], we commemorate the second anniversary of Father Richmond’s brutal death. He inspired us to love and defend our Catholic faith, and to serve the poorest of the poor,” the diocese said in a statement posted on social media. The diocese also held a special Mass to remember Father Nilo.

“We pray for Father Nilo and all persecuted Christians in other parts of the world defending their faith. We need to speak and stand up, especially when our faith is trampled upon,” Cabanatuan Father Jeffrey dela Cruz said in his homily. Father Nilo was the last priest to be murdered in the Philippines. In December 2017, a 72-year-old priest was shot while campaigning for the release of political prisoners. In April 2018, another priest was killed for supporting indigenous groups trying to reclaim what they said was their ancestral lands.

“We [priests] are being killed or being prosecuted for crimes that we never commit. We are just doing God’s call as pastors, that is, to see Christ in the poor and the marginalized,” Father dela Cruz told UCA News.
[Joseph Peter Calleja – UCA News]