Home
Missionssekretariat
Vatikan
Pope at audience: “Help the hungry, those defeated by life, the poor, the homeless”

Pope at audience: “Help the hungry, those defeated by life, the poor, the homeless” 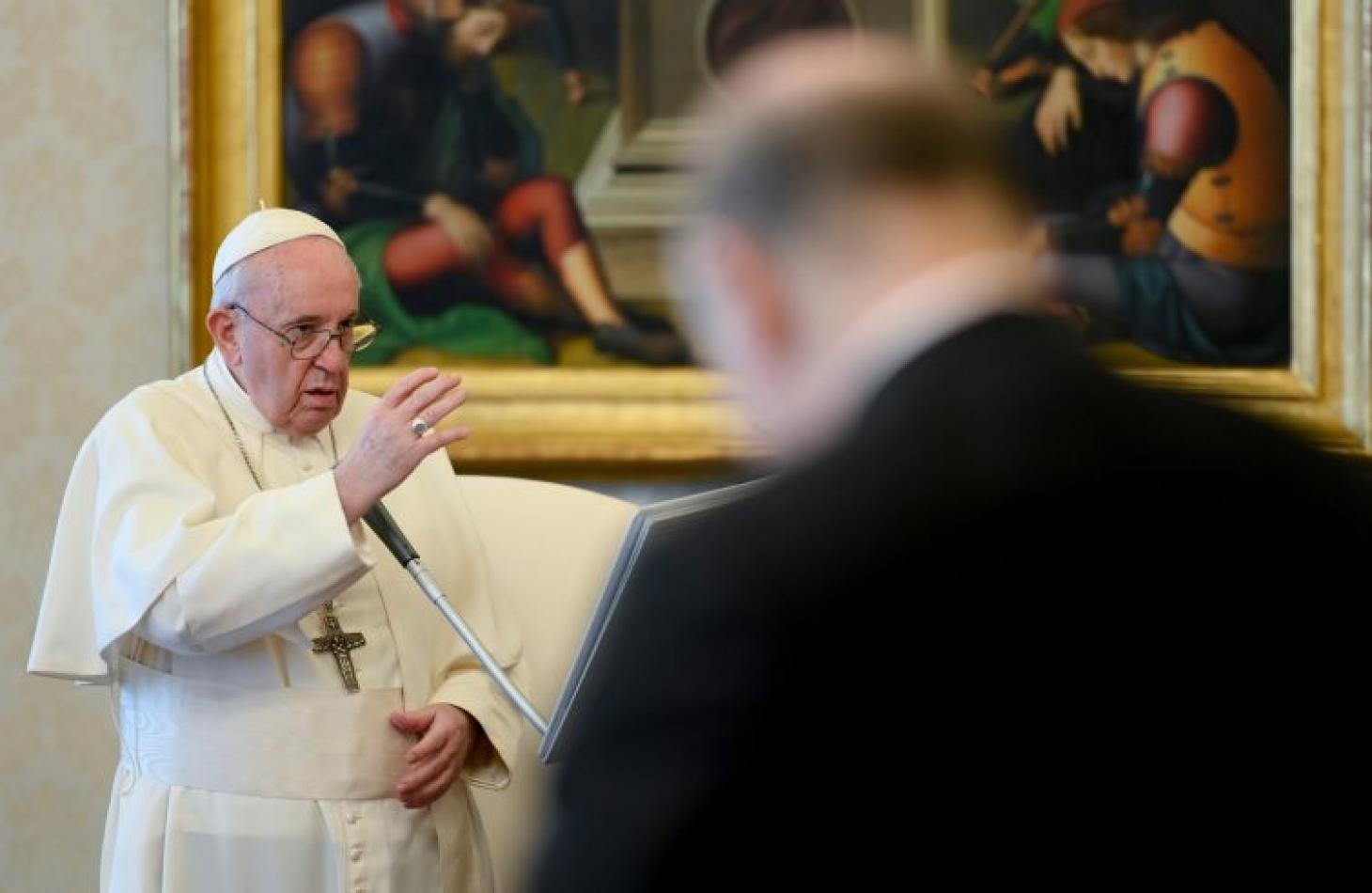 Thursday, June 18, 2020
Pope Francis devoted today's general audience, livestreamed from the Library of the Apostolic Palace, to the prayer of Moses. The "greatness" of pastors is “not forgetting the people”, never rejecting them. The lesson of the patriarch: "He does not sell out his people to advance his career. He does not climb the ladder, he is an intercessor". [Text: SIR. Photo: Vatican Media/
SIR]

“Today recurs the liturgical memory of Saint Brother Albert Chmielowski, protector of the poor”, the Pope said in the his greetings to the Polish faithful attending the online broadcast. “He helped the homeless and marginalized to recover a dignified role in society. Let us follow him in brotherly love, offering help to the hungry, the defeated in life, the poor, the needy and especially the homeless.” Today’s general audience, livestreamed from the private Library, was devoted to the prayer of Moses who was “human like us”, with his “doubts” and “fears”. The “greateness” of pastors is “not forgetting the people”, never rejecting them. The lesson of the patriarch: “He does not sell out his people to advance his career. He does not climb the ladder, he is an intercessor.”

“When God called him, Moses was in human terms a “failure”, said Francis referring to the biblical narration in Exodus, that describes his “dreams of glory” shattered: “As a young man he had felt compassion for his people, and had aligned himself in defence of the oppressed. But he soon discovered that, despite his good intentions, it was not justice, but violence that came from his hands. Moses was no longer a promising official, destined to rise rapidly in his career, but rather one who gambled away opportunities, and now grazed a flock that was not even his own.” And it was precisely in the silence of the desert of Midian that God summoned Moses to the revelation of the burning bush: “I am the God of your father, the God of Abraham, the God of Isaac, and the God of Jacob.” “Moses opposes God who speaks, who invites him to take care of the people of Israel with his fears and his objections.” The Pope’s remarks:

“With these fears, with this heart that often falters”, Moses “appears human like us.”

“And this happens to us too: when we have doubts, how can we pray? It is not easy for us to pray. And it is because of his weakness, as well as his strength, that we are impressed.”

The Holy Father added in unprepared remarks: “Moses does not reject God, but nor does he reject his people”, Francis went on: “He is faithful to his flesh and blood, he is faithful to God’s voice.” Moses is not “an authoritarian and despotic leader. He is a man of his people.” “Even in the most difficult moments, even on the day when the people repudiate God and him as a guide and make themselves a golden calf, Moses does not feel like putting his people aside.” Moses “is the bridge, the one intercessor between his people and God.

He does not sell out his people to advance his career. He does not climb the ladder, he is an intercessor.”

“What a beautiful example for all pastors who must be bridges!”, the Pope exclaimed: This is why they are called pontifex, bridges. Pastors are the bridges between the people, to whom they belong, and God, to whom they belong by vocation. This is what Moses is.” “I do not want to get ahead at the expense of my people.” This, for the Pope, is the prayer that true believers cultivate in their spiritual life: “Moses, in this sense, was the first great prophet of Jesus, our advocate and intercessor.” “And today, too, Jesus is the bridge between us and the Father”, Francis said: “Jesus intercedes for us, He shows the Father the wounds that are the price of our salvation, and He intercedes. And Moses is the figure of Jesus who intercedes for us. Moses urges us to pray with the same ardour as Jesus, to intercede for the world, to remember that despite all its frailties, it still belongs to God.”

“Everyone belongs to God”, concludes the Pope, in unscripted remarks: “the worst sinners, the wickedest people, the most corrupt leaders, they are children of God, and Jesus feels this and intercedes for everyone. And the world lives and thrives thanks to the blessing of the righteous, to the prayer for mercy, this prayer for mercy that the saint, the righteous, the intercessor, the priest, the bishop, the Pope, the layperson, any baptised person incessantly raises up for humanity, in every place and time in history.”
[M. Michela Nicolais - SIR]