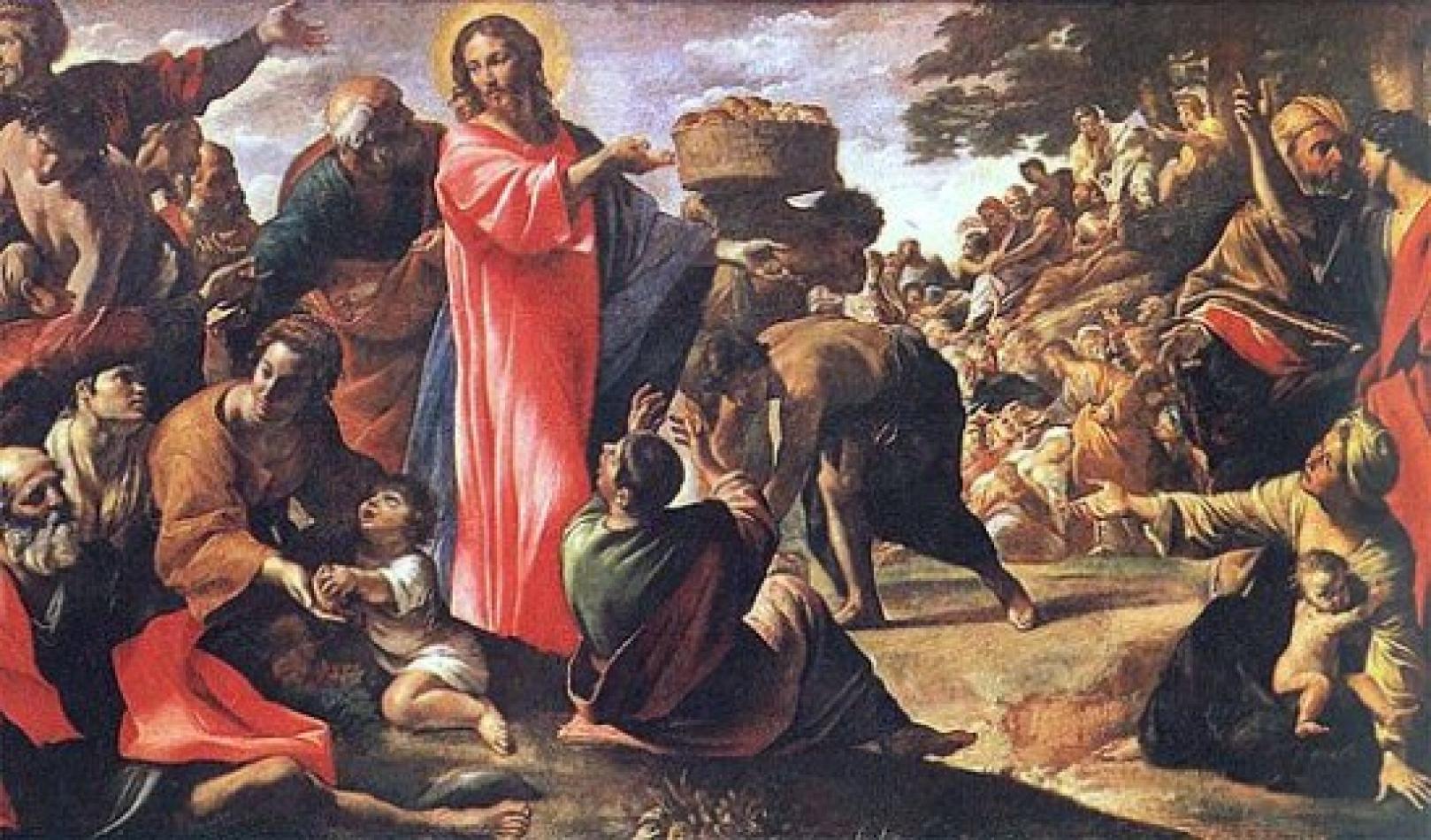 At the time of Jesus, there was a widespread belief that the Messiah would accomplish extraordinary signs and wonders, which would have gathered and introduced the people into the desert where he would repeat the miracle of the manna. Presenting Jesus coming into the desert followed by a great multitude of people who abandoned the city, the evangelist wants us to see in him the new Moses. 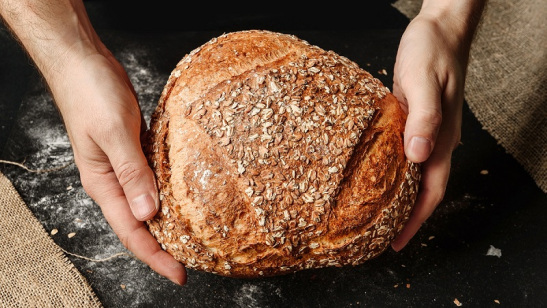 If one reduces this miracle as a gesture of power made ​​by Jesus to give proof of his divine powers, a number of unavoidable objections must be confronted. It’s not very likely that the moving of a crowd of many thousands of people is possible. It is also getting late. It precludes the impending fall of darkness which is not the most suitable time to distribute bread to so many people. From where did the twelve empty baskets they brought with them pop up? But the most provocative consideration is another one: what interest is there for today’s person that two thousand years ago, Jesus fed five thousand men, if then God permits that people continue to die for lack of bread?

What really happened that night in the vicinity of Lake Tiberias is difficult to establish. This is not what is important. In fact, the evangelists relate the episode in six versions, each with its own specific message. Let us try to grasp what the passage today wants to give us.

At the time of Jesus, there was a widespread belief that the Messiah would accomplish extraordinary signs and wonders, which would have gathered and introduced the people into the desert where he would repeat the miracle of the manna.

Presenting Jesus coming into the desert followed by a great multitude of people who abandoned the city (v. 13), the evangelist wants us to see in him the new Moses. Israel had left Egypt and entered into the Promised Land but had not yet reached freedom and had not yet entered into communion with his God. Behold, now he is led back into the desert.

If one wants to push forward more parallelisms, it’s sufficient to put the passage in its context. Matthew has just described the banquet organized for Herod’s birthday, in which the Baptist’s execution occurred (Mt 14:3-12). That banquet represents vividly the corrupt, oppressive and bloody society, that must be repudiated by those who follow Christ. It is in the desert that the foundations of a new society are laid.

Here are the features: first, it has Jesus as guide and his very own feelings as a norm of mutual relations. He feels compassion (v. 14). The verb use—splagknizomai—is not a vague feeling of commotion, but a deep, visceral (in Greek the bowels are called splagkna) emotion. We’ve already found this term: “When he saw the crowd he was moved with pity, for they were harassed and helpless like sheep without a shepherd” (Mt 9:36).

Jesus is sensitive to the needs of a person. He feels part of him/her and is involved intimately; it squeezes his heart, but his disturbance does not lead him to discouragement. He does not fall into curses, vain words of regret or sterile crying. He becomes a stimulus for immediate action in favor of one who suffers: “When he went ashore, he saw the crowd gathered there and he has compassion on them. And he healed their sick” (v. 14).

Com-passion, to suffer-together with the brothers and sisters is the force that leads the disciple to engage oneself in the building of a new society. The only one who has mastered the sensitivity of the Master is moved to intervene, to make his own same gestures of love. “Your attitude should be the same as Jesus Christ had”(Phil 2:5)—Paul recommends: “Rejoice with those who are joyful, and weep with those who weep. Live in peace with one another” (Rom 12:15-16).

This urgent inner need to do good is the unmistakable sign of the presence in the disciple of the Spirit of Christ.

It’s not only with sicknesses, the manifestations of weaknesses, and human fragility that Jesus is confronted with. Even the urgent need of food and lack of assets necessary for life are addressed. What is Jesus’ response to the hunger in the world?

If the miracle is perhaps the solution, today’s passage would not have much to tell us because no one is given the ability to do such wonders. With his gesture, Jesus indicates what every disciple can and should doso that no one lacks bread. He does not resolve the problem of hunger without human cooperation.

The first, subtle temptation to watch out is that of disengagement, that of wanting “to dismiss the crowd” so that each one makes his own arrangement, going to the villages to buy something to eat (v. 15). It is the suggestion put forward by the disciples who, evidently, have not understood that adherence to Christ implies a concrete engagement in favor of those who are in need. They do not need to go—Jesus answers—“you give them something to eat” (v. 16).

The difficulty, which is also ours, is immediately raised: that what we have is not sufficient (v. 17).

If everyone keeps selfishly for oneself what one has, in fear that one day one may lack what is necessary,then there will always be hunger in the world.

Jesus asks the disciples to give him what he has, even if it seems little to him. Five loaves and two fish—seven pieces of food—are the symbol of totality. Nothing is held back; the generosity should have no limits. The sharing of goods is Christ’s proposal and is the only one in tune with God’s plan. He is the Father and he wants his children to live as brothers and sisters. They do not accumulate for themselves nor hoard the goods destined for all. When everyone will put at the disposal of others what he has (not only money but one’s whole self, time, talents, intelligence, abilities, and so forth) he will witness a miracle: there will be food for everyone and leftover. On the generosity of persons, God often pours out his blessing.

The bread that Jesus distributes is not only the material one.

Like water, the bread was a symbol in Israel of God’s wisdom. Both the prophets and the sages of the Old Testament allude to them often: Wisdom has laid her table—says the author of Proverbs. To the senseless, she says, “Come, eat and drink of the bread and wine I have prepared” (Pro 9:1-5). Amos announces that God will send hunger and thirst in the land: “not hunger for bread or thirst for water, but for hearing the word of Yahweh” (Am 8:11).

One day Jesus said: “One does not live on bread alone, but on every word that comes from the mouth of God” (Mt 4:4). The food that he gives and that nourishes the person is his word, indeed, it is himself, the Word of God that must be assimilated.

“Jesus took the loaves—Matthew says—and raised his eyes to heaven, pronounced the blessing and handed them to the disciples to distribute to the people” (v. 19) These words are familiar to us. They are those of the Eucharist. The evangelist takes them to make the Christians of his communities understand that, after having assimilated the bread of the Gospel which is given to them through the preaching of the apostles, they must also approach the Eucharistic banquet to be filled.

Five thousand men are fed. It is the number that symbolizes Israel. It is to this people that bread is offered. Israel is the first to be invited to the banquet announced by the prophets. After Israel will be satiated, twelve baskets of leftover are gathered. Twelve indicates the new community, constituted by the twelve apostles around Christ. To this new people bread will not be lacking—that is Christ—there will always be a remainder and each time he will resume the distribution.

Through his disciples—to whom he delivered his bread—Jesus himself is the one who continues to feed the people of all times and places.

READ:  The crowds continue to follow Jesus as he heals and teaches them.  Here he feeds the, prefiguring the feeding in the Eucharist.

REFLECT:  People need to be fed with truth as well as with bread.  What was the miracle:  the multiplication of some loaves or fishes or the following of the teachings of Jesus by sharing with others?  Can the Eucharist exist outside the celebration of Mass?

PRAY:  When praying at the Eucharist, the believer makes a commitment to live the Eucharist outside of Mass.  Praying with the priest and the community finds completion in living out of the teaching of Jesus.

ACT:  Pay attention to the eucharistic moments with family and friends outside of Mass.