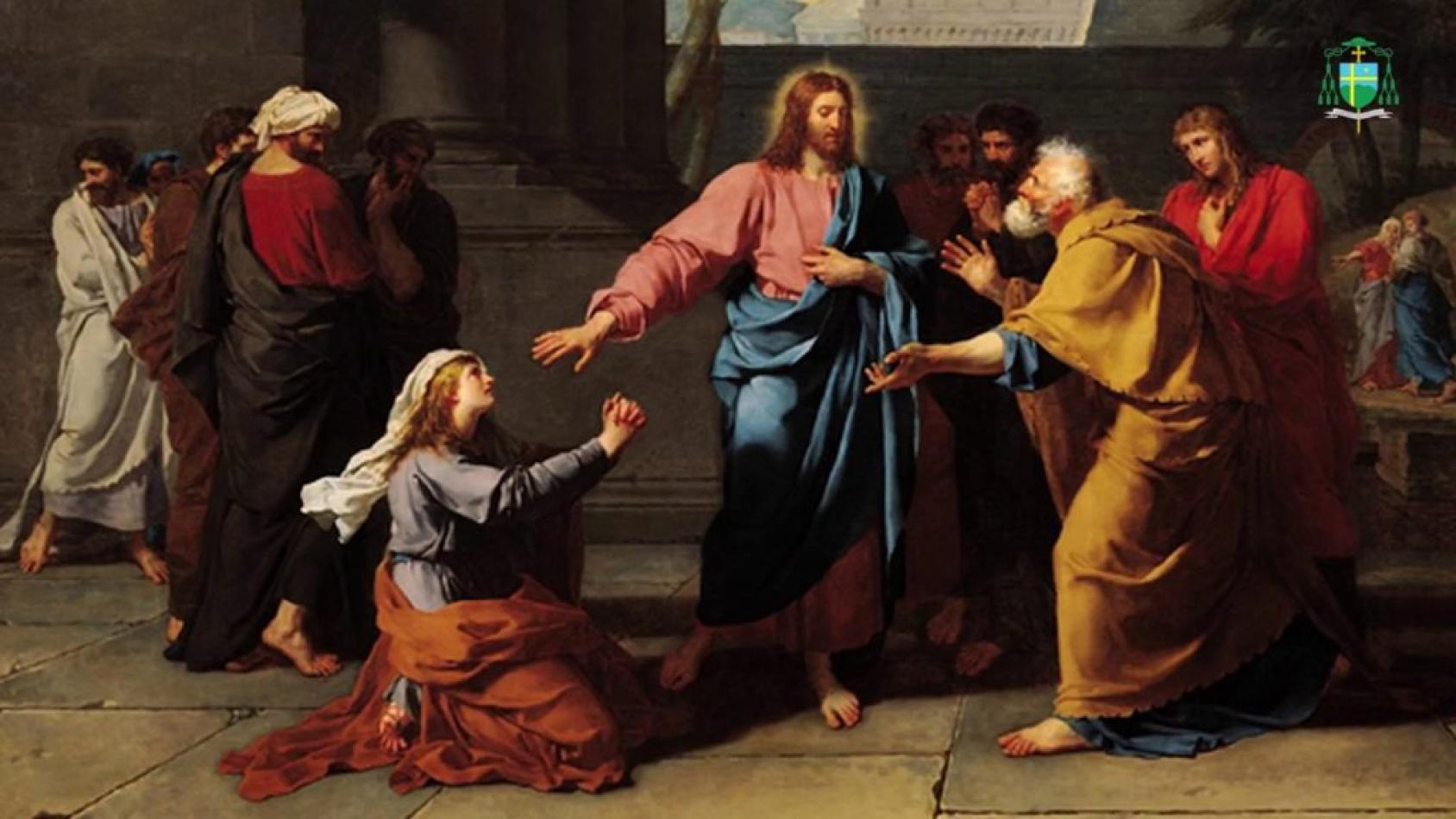 The evangelist relates the dialogue between Jesus and the woman. He sounds almost delighted to emphasize the increasingly harsh tone of the Master’s responses. In front of the woman’s request for help, he takes a dismissive attitude: not worthy of a look, not addressing her even a word (v. 23). Then the apostles, a little annoyed, intervene. They want to solve the situation as soon as possible as it is likely to become embarrassing. They ask him to send her away. “Listen to her,” says our text, but it is not a correct translation. “Send her away!” is their request. (...) 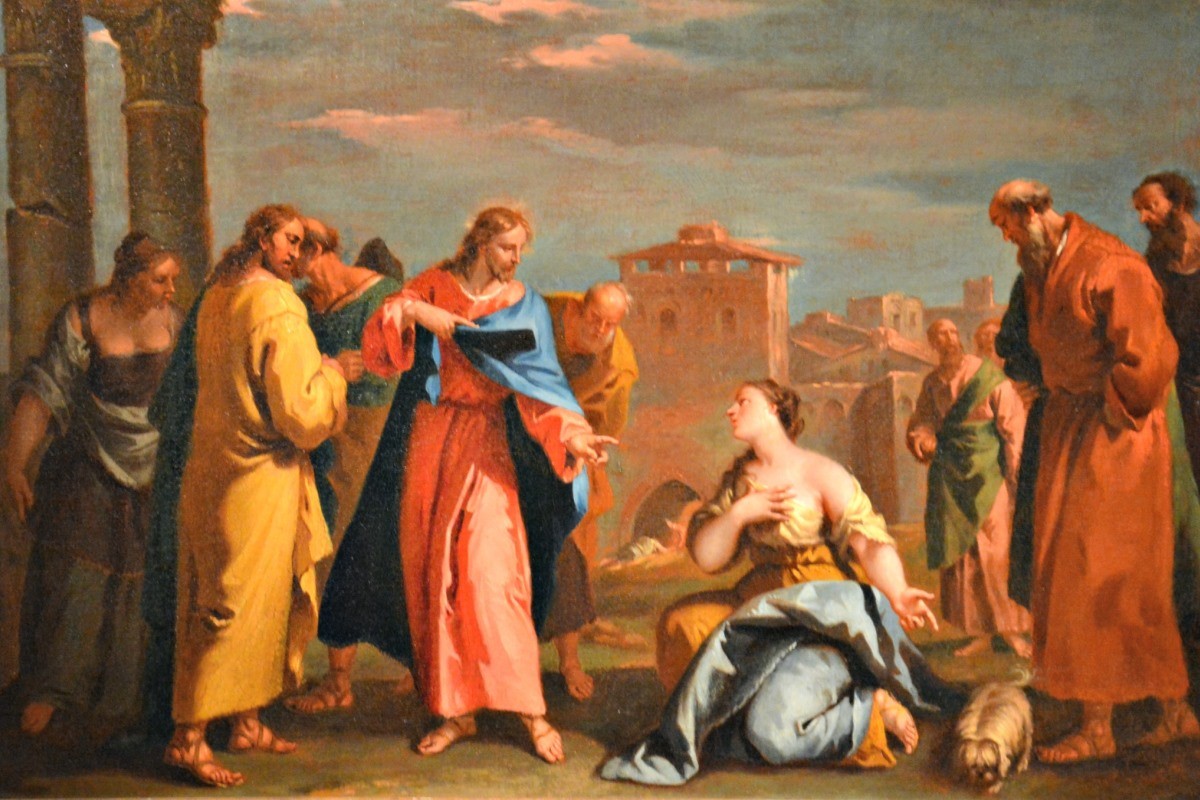 The rabbis tell that a farmer had planted in his field all sorts of trees and tended them with care. He waited many, many springs and summers but was disappointed. There were many leaves, some flowers, but no fruit. He was about to set fire to the field, when, on a branch, a little deviated, he saw a pomegranate. He got and tasted it: it was delicious. “For the sake of this pomegranate—he happily exclaimed—I’ll let all the other trees in my garden live.” Similarly—the rabbis concluded—for the sake of Israel God will save the world.

Not all Jews, however, shared the openness of these enlightened rabbis. The majority thought that there is only one chosen and holy stock and that the pagans must be avoided as unclean and outcasts (Acts 10).

The first Christian community, sprouted as a lush sapling from the stump of Israel, confronted this exclusivism. The Christians asked themselves: is salvation destined for all peoples or is it reserved for the children of Abraham? There arose disagreements, misunderstandings, bitter conflicts that divided the Church (1 Cor 1:10-12; Gal 2:11-14). Some argued that the Gospel was to be announced only to the Israelites. To substantiate their argument, they referred to the behavior of Jesus during his public life. He had carried out his mission within the borders of Palestine. They also recalled his recommendation: “Do not visit pagan territories and do not enter a Samaritan town. Go instead to the lost sheep of the people of Israel” (Mt 10:5-6).

Others cultivated more open ideas. They were convinced that the Gospel was to be preached primarily to the Jews, the first recipients of salvation (Mt 22:1-6). But they were also convinced that the Gentiles were to be admitted to the banquet hall of the Kingdom of God (Mt 22:8-10). Israel was the “firstborn” of the Lord (Sir 36:11), but not “the only begotten”: God had always considered his children, also other nations (Jer 3:19). The order of the Risen Lord was unequivocal: “Go therefore and make disciples of all nations. Baptize them in the name of the Father and of the Son and of the Holy Spirit; and teach them to observe all that I have commanded you” (Mt 28:19-20).

Due to the short time (maybe only three years) of his public life, Jesus had limited its mission “to the lost sheep of the house of Israel.” However, he also made clear gestures to indicate that his salvation was for all peoples. The episode narrated in the Gospel today is one of the most significant and revealing in this regard.

One day a stranger comes to Jesus. She comes from the region of Tyre and Sidon and “continues to cry out” (note the insistence of her prayer), begging for the healing of her daughter. The text calls her “Canaanite,” thus belonging to an enemy nation, a dangerous people that seduced Israel several times. It diverted Israel from the right faith and led her to worship Baal and Astarte.

The disciples of Jesus are Israelites educated in the most rigorous religious fundamentalism. They are surprised by the effrontery of this intrusive pagan who dares to speak to their Master. They await his reaction: doesn’t he mind the current regulations that prohibit communication with strangers or—as he often did—breakthe traditional mold?

The evangelist relates the dialogue between Jesus and the woman. He sounds almost delighted to emphasize the increasingly harsh tone of the Master’s responses. In front of the woman’s request for help, he takes a dismissive attitude: not worthy of a look, not addressing her even a word (v. 23). Then the apostles, a little annoyed, intervene. They want to solve the situation as soon as possible as it is likely to become embarrassing. They ask him to send her away. “Listen to her,” says our text, but it is not a correct translation. “Send her away!” is their request.

Jesus seems to follow their advice. He becomes more severe and says: “I was sent only to the lost sheep of the nation of Israel” (v. 24).

The image of the flock in disarray occurs frequently in the Old Testament. “My sheep wander over the mountain and high hills, and when they are scattered throughout the land, no one bothers about them or looks for them” (Ezk 34:6), which is echoed by another prophet: “Like sheep we had all gone astray, each following his own way” (Is 53:6). There’s also the promise of God: “I myself will care for my sheep and watch over them. I will search for the lost and lead back the strays. I will bind up the injured and strengthen the weak, but the fat and the strong will be eliminated. I will shepherd my flock with justice” (Ezk 34:11:16).

The Lord has made commitments only with the Israelites. He should be concerned only with them. Presenting himself as a shepherd of Israel, Jesus declares that he intends to fulfill the prophecies and the woman understands. She knows that she is not of the chosen people. She is conscious of not belonging to the “flock of the Lord” and not having a right to salvation. However, she relies on the goodwill and free interventions of God. Bowing down to Jesus and she begs: “Lord, help me!”

In response she receives an insult: “It is not right to take the bread from the children and throw it to puppies” (v. 26).

The Israelites are the sheep, the Gentiles are the dogs. The use of the diminutive mitigates, but not by much, the harshness of the offense. Throughout the ancient Middle East, “dog” was the cruelest insult. It was the nickname with which the Jews called the pagans. A raw image, taken in various texts of the New Testament: “Do not give what is holy to the dogs, or throw your pearls before pigs” (Mt 7:6). “Outside are the dogs!” (Rev 22:15). “Beware of dogs” (Phil 3:2). It was used to emphasize the absolute incompatibility between the pagan life and the evangelical choice.

On the lips of Jesus this expression surprises, especially if one takes into account the fact that the Canaanite woman turned to him with great respect. Three times she called him “Lord”—title with which Christians profess their faith in the Risen One—and once the “Son of David” which equates to recognizing him as the Messiah. It seems that, like all his countrymen, he also has an abomination to foreigners. But is it so?

The conclusion of the story enlightens us. “Woman—says Jesus—how great is your faith.” It is a praise that has never been addressed to an Israelite woman.

Now everything becomes clear. That which precedes—the provocation, the contempt for the pagans, the reference to their impurity and unworthiness—were but a clever staging. Jesus wanted his disciples to alter radically the way they deal with foreigners. He “played the part” of the integral and pure Israelite to show how ridiculous and senseless the separatist mentality was cultivated by his people. While the “flock of sheep” kept themselves away from the shepherd who wants to gather them (Mt 23:37), the “dogs” approached him and, because of their great faith, obtained salvation.

The message is as timely as ever. The Church is called to be a sign that all discriminations related to gender, membership to a race, to a people or to an institution are ended. Paul declares: “In Christ Jesus, all of you are sons and daughters of God through faith. All of you who were given to Christ through baptism, have put on Christ. Here there is no longer any difference between Jew or Greek, or between slave or freed, or between man and woman; but all of you are one in Christ Jesus. And because you belong to Christ, you are of Abraham’s race and you are to inherit God’s promise” (Gal 3:26-29).

The Canaanite woman—the pagan, the infidel—is singled out as a model of the true believer. She knows she does not deserve anything, believes that only by the Word of Christ she can freely arrive at salvation. She implores and receives it as a gift.

READ:  Healing and feeding seem to go together.  Jesus does both, and people of faith see the meaning of his actions.  Others do not.

PRAY:  Avoid looking down on others who are different.  Make this an intention in your prayer, especially when you are tempted to be prejudiced against some group or individual.

REFLECT:  Why do people refer to others they do not like as dogs? Are Jesus’ words to the Canaanite woman out of character for him?  To what extent could this story perhaps reflect the relationship between some Jewish Christians and Gentile Christians in the community of Matthew?

ACT:  Do not just tolerate different people but accept them and acknowledge their gifts.  When the opportunity occurs, celebrate life with people who differ from you.