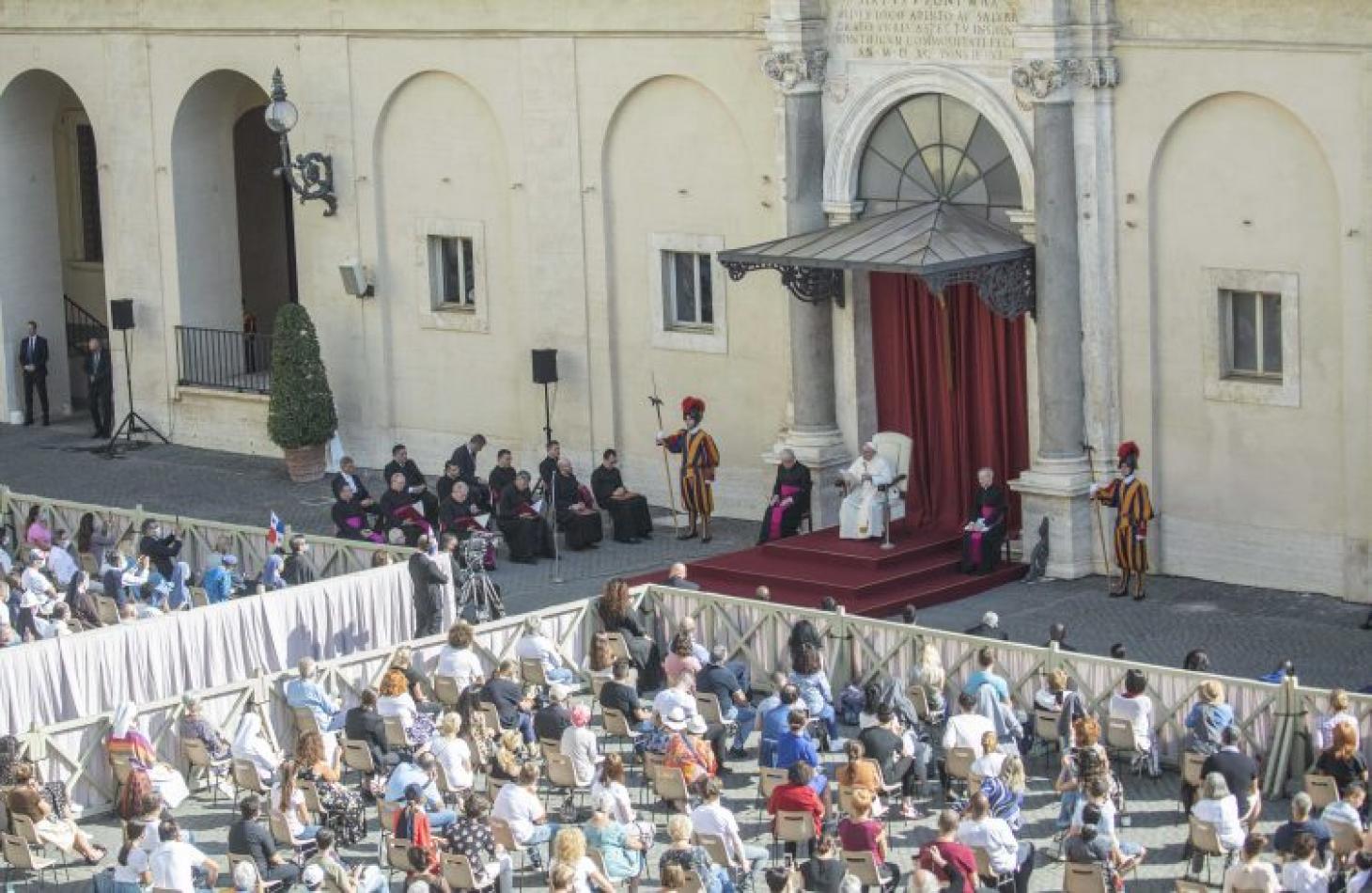 Thursday, September 10, 2020
"Social love" is the way out of the current health crisis: it is the heart of the Pope’s General Audience held in the Courtyard of Saint Damasus. The Holy Father’s catechesis focused on "good politics", "decisive to face any type of crisis". No to "partisan interests" on the vaccine and to the "devotees of Pontius Pilate". Covid-19 is "a virus that does not recognize barriers" and that requires the rejection of "throw-away culture." [Marco Calvarese - SIR]

“Social love.” Recovery from the crisis caused by Covid-19 stems from this virtue, that must be reflected in good politics and in each citizen’s responsible commitment for the common good, the Pope  said in the second General Audience held in the Courtyard of St. Damasus, before some 500 faithful. Francis warned against “partisan interests” on vaccines and the “devotees of Pontius Pilate”. After getting out of the car, the Holy Father took off his mask and walked among the faithful, keeping a safe distance. 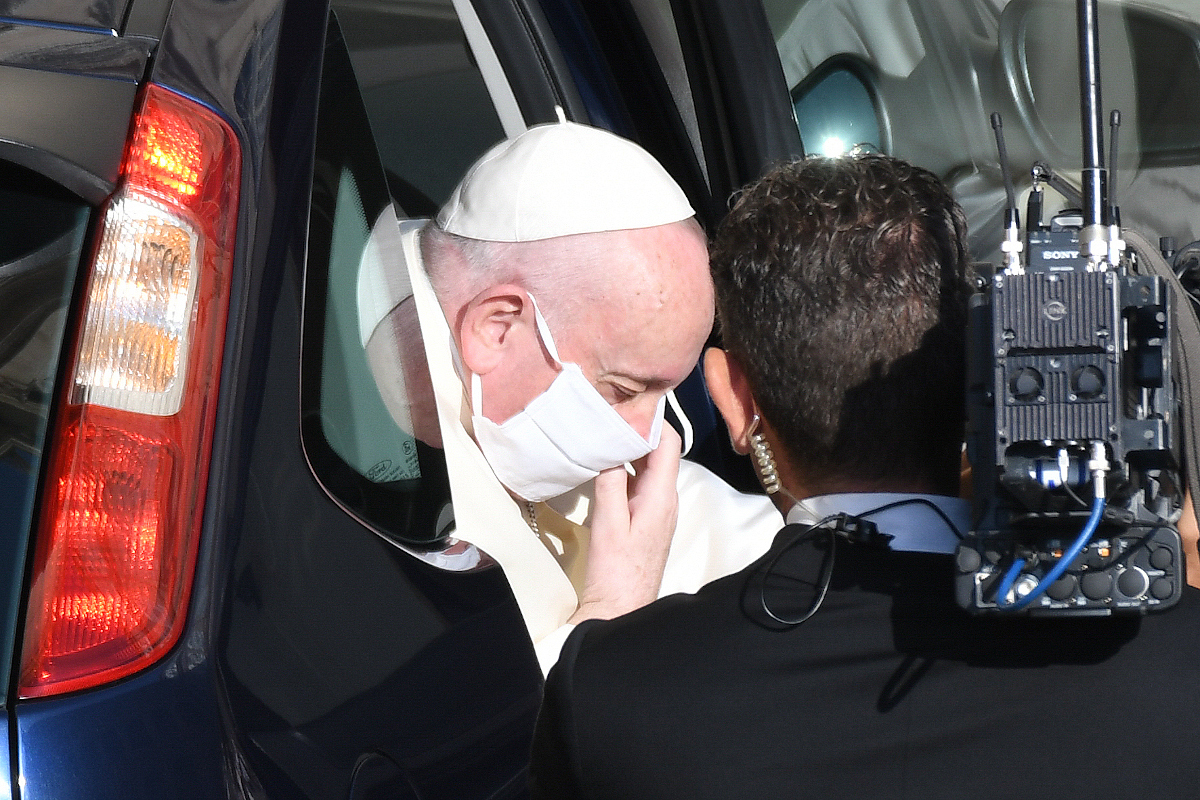 In the final part of his catechesis, Francis called for “good politics”, defined as “a duty.” “Unfortunately, politics does not often have a good reputation”, but “this is not to say that all politicians are bad”, he added in unwritten remarks. For the Pope, “good politics” “is possible insofar as every citizen, and especially those who assume social and political commitments and positions, roots what they do in ethical principles and nurtures it with social and political love. Christians, in a particular way the laity, are called to give good example of this and can do it thanks to the virtue of charity, cultivating its intrinsic social dimension.”

“It is therefore time to improve our social love, with everyone’s contribution, starting from our littleness”, Francis said, repeating the expression “social love”: “The common good requires everyone’s participation. If everyone contributes his or her part, and if no one is left out, we can regenerate good relationships on the communitarian, national and international level and even in harmony with the environment.” With regard to the current health crisis, the Pope expressly denounced:

“Unfortunately, we see partisan interests emerging. For example, some would like to appropriate possible solutions for themselves, as in the case of vaccines, to then sell them to others. Some are taking advantage of the situation to instigate divisions: by seeking economic or political advantages, generating or exacerbating conflicts. Others simply are not interesting themselves in the suffering of others, they pass by and go their own way. They are the devotees of Pontius Pilate, washing their hands of others’ suffering.”

“The Christian response to the pandemic and to the consequent socio-economic crisis is based on love”, which, if true love, “is always expansive and inclusive”: “It is not limited to the relationship between two or three people, or to friends or to family, it goes beyond. It comprises civil and political relationships, including a relationship with nature.” “Since we are social and political beings, one of the highest expressions of love is specifically social and political which is decisive to human development and in order to face any type of crisis”, the Pope remarked: “We know that love makes families and friendships flourish; but it is good to remember that it also makes social, cultural, economic and political relationships flourish, allowing us to construct a ‘civilisation of love’, as Saint Paul VI used to love to say, and, in turn, Saint John Paul II.”

“Without this inspiration the egotistical, indifferent, throw-away culture prevails.” “Health, in addition to being an individual good, is also a public good”, and “a healthy society is one that takes care of everyone’s health.” Covid 19, the Pope said, is “a virus that does not recognise barriers, borders, or cultural or political distinctions” and it thus “must be faced with a love without barriers, borders or distinctions”: “this love can generate social structures that encourage us to share rather than to compete, that allow us to include the most vulnerable and not to cast them aside, that help us to express the best in our human nature and not the worst”, this is valid at both the level of the smallest and largest communities, as well as at the international level, in the family, in the neighbourhoods and in large cities alike.

Francis warned: “If the solutions for the pandemic bear the imprint of egoism, whether it be by persons, businesses or nations, we may perhaps emerge from the coronavirus crisis, but certainly not from the human and social crisis that the virus has brought to light and accentuated.”
[Marco Calvarese - SIR]