29th Sunday in Ordinary Time (A) 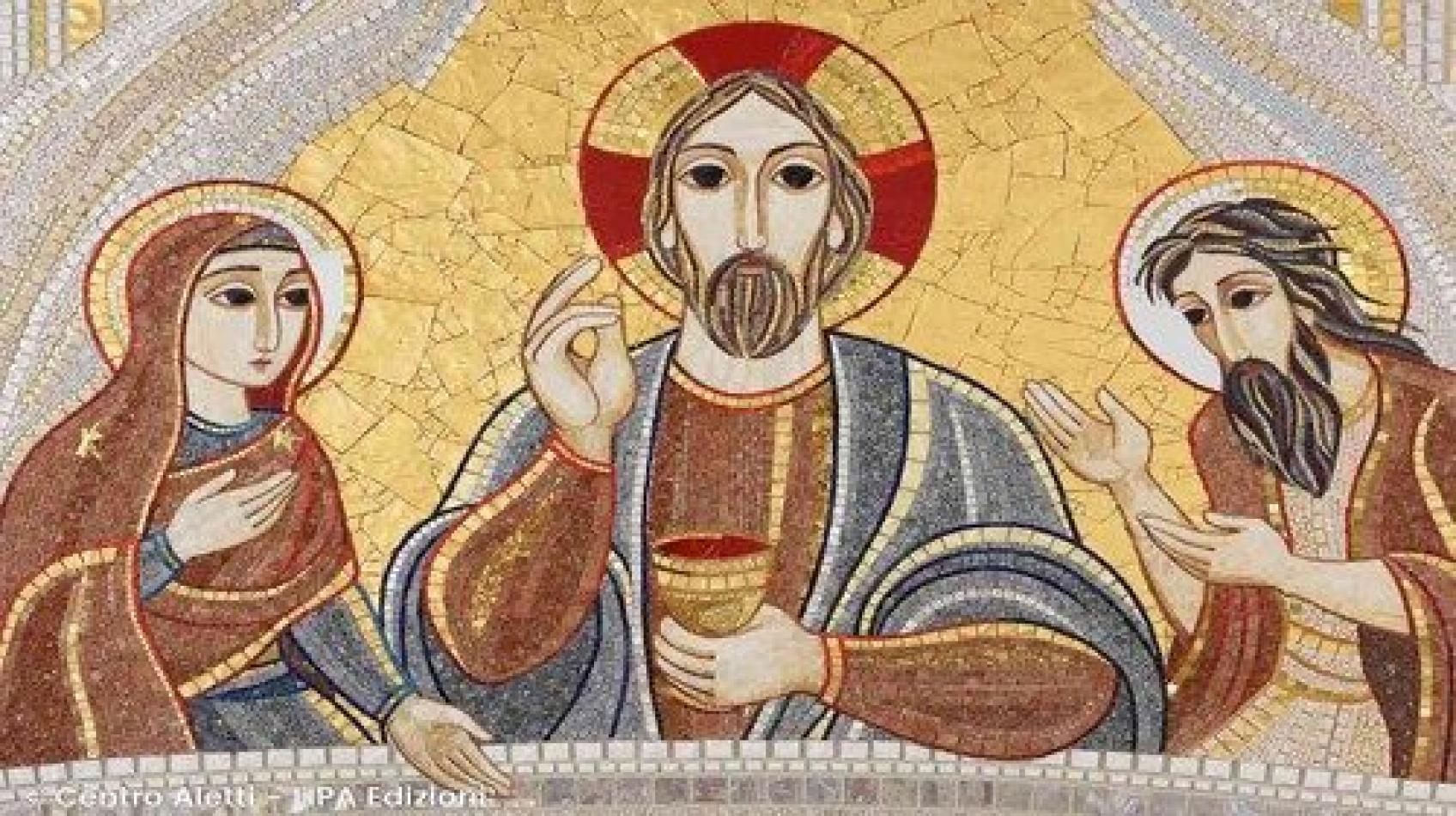 “... Give to Caesar what is Caesar’s and give to God what is God’s.” The passage’s final sentence is one of the most famous, but also the most enigmatic. It is not easy to establish the meaning, so it is not always mentioned apropos. It is sometimes used by those in power to ask the Church hierarchy not to meddle in political affairs. Other times these are the ones reminding the rulers to assert its right to defend and proclaim the values ​​that flow from the Gospel. (...) 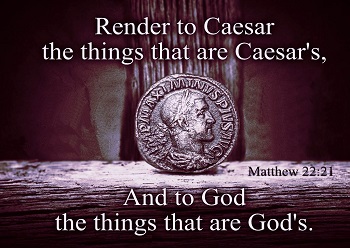 The passage’s final sentence is one of the most famous, but also the most enigmatic. It is not easy to establish the meaning, so it is not always mentioned apropos. It is sometimes used by those in power to ask the Church hierarchy not to meddle in political affairs. Other times these are the ones reminding the rulers to assert its right to defend and proclaim the values ​​that flow from the Gospel. It was used, however, by those who supported the papal hierocracy and advocated the caesaropapism against those who defended the secular state. They also dreamt of subjecting the state to the religious power by sacralizing the institutions and justifying the temporal power of the Church. Someone, more simply, uses it as an invitation to give everyone what they deserve.

To understand the phrase, there is a need to place it in the context of the dialogue from where it came from.

The Emperor of Rome demanded of each of his subjects an annual monetary payment to the treasury. Those who had attained the age of fourteen (man), twelve (woman) and up to sixty-five years were obliged to pay. It was the tributum capitis or testatico for which the heinous censuses were done often provoking popular uprisings (Lk 2:1-5; Acts 5:37). Counting the people who belonged to God was equivalent, for the pious Israelite, to shielding one from the authority of the Lord and to enslaving one to a human power. For this reason, after the census, David felt his heart beat and said, “I have sinned greatly in what I have done; I have acted foolishly” (2 S 24:10).

One day the Pharisees, accompanied by supporters of Herod, present themselves to Jesus. In a very respectful way, having recognized his love for the truth and his rejection of compromise, ask him a tricky question: “Master, we know that you are an honest man and truly teach God’s way. You are not influenced by others nor are you afraid of anyone. So tell us what you think: is it against the Law to pay taxes to Caesar or not?” (vv. 16-17).

This alliance between the Pharisees and Herodians is strange. They first thought it impious to support the Roman occupation; the latter were instead supporters of Herod Antipas, the puppet with no personality, dominated by Emperor Tiberius, and they were collaborators. We find them allied against Jesus because he annoyed both. He was loyal and refused all forms of hypocrisy.

Their question is worded in such a way as to make it impossible for any loophole: If one is against the payment of taxes, he could be denounced to the Roman authorities as a subversive. (In fact, according to Lk 23:2, before Pilate they accused him of inciting the people not to pay taxes to Caesar). If he is in favor, he attracts the antipathy of the people who hate the Roman colonizers.

All taxes are reluctantly paid anywhere but, to make the tribute odious, a religious cause was added in Palestine. The money required had on one side a representation of the Emperor of Rome and the inscription: “Tiberius Caesar, august son of the divine Augustus” and on the back the title “Supreme Pontiff” with the image of a seated woman, a symbol of peace, perhaps Livia, the mother of Tiberius. In 1960 about thirty pieces of these coins were found on Mount Carmel.

It is known that the Israelites disliked human images, prohibited by their law. Using the money of Tiberius meant to give one’s consent to a form of idolatry. Jesus is aware of the pitfalls that they have laid for him. He does not avoid the question. As he usually does, he skillfully leads the interlocutors at the root of the problem.

He wants them first to show him the money. They naively reach out under the tunic where they usually hide the money (clothes at that time had no pockets) and they present it to him. They do not realize that Jesus is playing with them: first, he asks for the money. It means that he does not possess it (for he does not even have a stone to lay his head; Mt 8:20), and if they pull it out, it means that they use it without any problem. They receive it for their services, and with it, they buy the products at the market. What’s more, the dispute takes place in the precincts of the temple (Mt 21:23), and in the holy place, and they do not bother to profane it by showing that image. They have scruples only when they have to pay taxes.

After looking at the money Jesus asks, “Whose image is this?” “Caesar’s,” they say. “So—he concludes—give to Caesar what is Caesar’s and give to God what is God’s” (v. 21).

The first message that Jesus wants to give is clear. It is a moral duty as well as civil to contribute to the common good with the payment of tribute. There is no reason that justifies tax evasion or theft of state assets. Whatever the policy and economic choice of the government, the disciple of Christ is called to be an honest and exemplary citizen. He is actively engaged in building a just society and shuns the subterfuge. He makes political choices that favor the weakest, not those that safeguard their own interests.

Writing to the Romans, Paul restates in more explicit terms the directive of the Master. We are at the beginning of Nero’s reign—the Emperor is in his twenties and for three years he initially governs in a lenient and moderate way. Here’s what the apostle recommends to the Christians in the capital: “Let everyone be subject to no authority that does not come from God, and the offices have been established by God. Whoever, therefore, resists authority goes against a decree of God and those who resist deserve to be condemned. It is necessary to obey not through fear but as a matter of conscience. In the same way, you must pay taxes and the collectors are God’s officials. Pay to all what is due them, to whomever you owe contributions, make a contribution; to whom taxes are due, pay taxes; to whom respect is due, give respect” (Rom 13:1-7).

Jesus’ answer, however, is not limited to state the duty to contribute to the common good with the payment of taxes. He adds: “Give to God what is God’s.”

The verb he uses more precisely means “to return.” Looking to the present, therefore, he says, “Give back to Caesar what belongs to Caesar and return to God what is God’s.” They are not only holding back the money that should be handed over to the emperor, but they also seized illegally and unjustly, a property of God. They must give it back right away because he claims it; it is his.

Tertullian already in 200 A.D. realized that he was the person that was handed back to God. Creating him, in fact, he had said: “Let us make man in our image, to our likeness. So God created man in his image, in the image of God he created him” (Gen 1:26-27).

If the coin had to be “returned” to Caesar because on it was stamped the face of his master, the person must be “returned” to God. The human being is the only creature on whom the face of God is imprinted. He is sacred and no one can take him as his own. Those who make them their own (enslave, oppress, exploit, dominate, and use them, as an object) should immediately return him to his Lord.

READ: The hostility between Jesus and the religious authorities built up day-by-day. Because of this, the Pharisees plotted with the Herodians on how to trap Jesus. They tried to trip him with a question that will either implicate Jesus on religious grounds or if not, on political grounds. Jesus sidestepped the trap with a clever reply.

ACT: To be just, we have to do just acts. Let us start by working for justice not just advocating it.

REFLECT: If one were to settle the question as to whom our lives belong, one must look at the engraved image in our souls – whose would it be? Caesar’s or God’s who has shaped, known, and called us even before we were born? Let us give to God what belongs to God – our very lives.

PRAY: Let us ask that justice will reign in our land starting with ourselves and our community. Let us pray for a true sense of belongingness to God and his Kingdom.