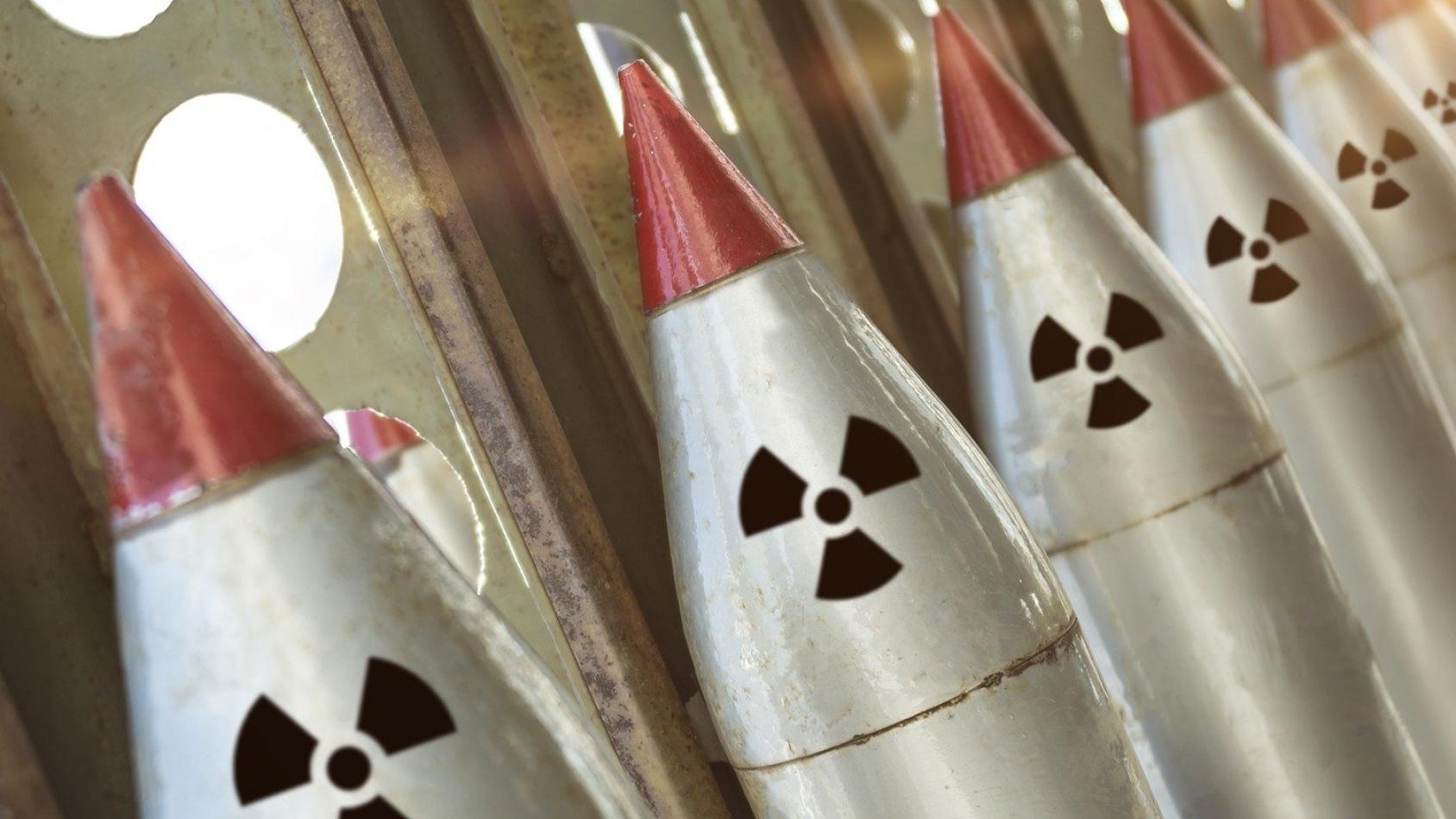 Thursday, January 21, 2021
We, Catholic church leaders from around the world, welcome the entry into force on 22 January 2021 of the United Nations Treaty on the Prohibition of Nuclear Weapons. We are encouraged that a majority of UN Member States actively support the new treaty through adoption, signatures, and ratifications. It is fitting that the Holy See was among the first states to join the accord in 2017. In addition, public opinion surveys worldwide demonstrate the global conviction that nuclear weapons must be abolished. The worst of all weapons of mass destruction has long-since been judged to be immoral. Now it is also finally illegal. (
See please attachment)

On 22 January, Pax Christi International, along with our members, civil society partners and people of goodwill around the world, will celebrate the entry into force of the United Nations Treaty on the Prohibition of Nuclear Weapons. We have worked for decades for this moment and look with hope toward a nuclear weapon-free world.

The treaty obliges states parties to “never under any circumstance . . . develop, test, produce, manufacture, otherwise acquire, possess or stockpile nuclear weapons.” It also acknowledges the disproportionate effect of nuclear weapons on women and girls, and Indigenous peoples whose lands are often exploited for mining and testing. Importantly, the treaty gives weight to existing legal, diplomatic and financial pressure to eradicate nuclear weapons.

"We finally live in a world where nuclear weapons are illegal. Pax Christi International has long worked for the ban of these weapons, through dedicated advocacy and the promotion of nonviolence,” remarked Greet Vanaerschot, secretary general of Pax Christi International. “Today marks the turning of the nuclear tide, and we will continue our efforts toward significant disarmament and the cultivation of just peace.”

To mark this historic moment, Catholic leaders from around the world and throughout the Pax Christi International movement have joined in a collective message. Signed by more than 100 Catholics in every capacity within our Church, people of faith throughout our movement, the message encourages leadership from Pope Francis on nuclear disarmament, national action in support of further ratifications of the treaty, and divestment from corporations and banks financing nuclear weapons. The full text of the message as well as the signatories is available in English, Spanish, and French.

On 22 January we will be celebrating along with our members and partners. For a list of activities, please click here. You are also encouraged to share our social media graphics to inspire governments and church leaders to take all action possible for the eradication of nuclear weapons. Here are some sample messages to share along with the graphics on social media. Don’t forget to tag Pax Christi International so we can amplify your voice!

·More than 100 Catholic leaders have joined together in support of the entry into force of the #nuclearban for a world free of nuclear weapons calling for moral leadership and divestment. #tpnw #letsbuildpeacetogether.

·We did it! The #nuclearban treaty has entered into force. Nuclear weapons are finally illegal. Congratulations to every state, every campaigner and every single one of you that helped make this happen. #TPNW #letsbuildpeacetogether.

·51 countries around the world have agreed to never under any circumstances develop, test, produce, manufacture, otherwise acquire, possess or stockpile nuclear weapons or other nuclear explosive devices. Who’s next? #nuclearban #tpnw #letsbuildpeacetogether.

The Treaty on the Prohibition of Nuclear Weapons is the first legally binding international agreement to comprehensively prohibit nuclear weapons. For background information and an explanation on how the treaty works, ICAN has prepared this booklet. For the full text of the treaty, please visit the United Nations website. Pax Christi International is an active member of the 2017 Nobel Peace Prize winning International Campaign to Abolish Nuclear Weapons (ICAN). 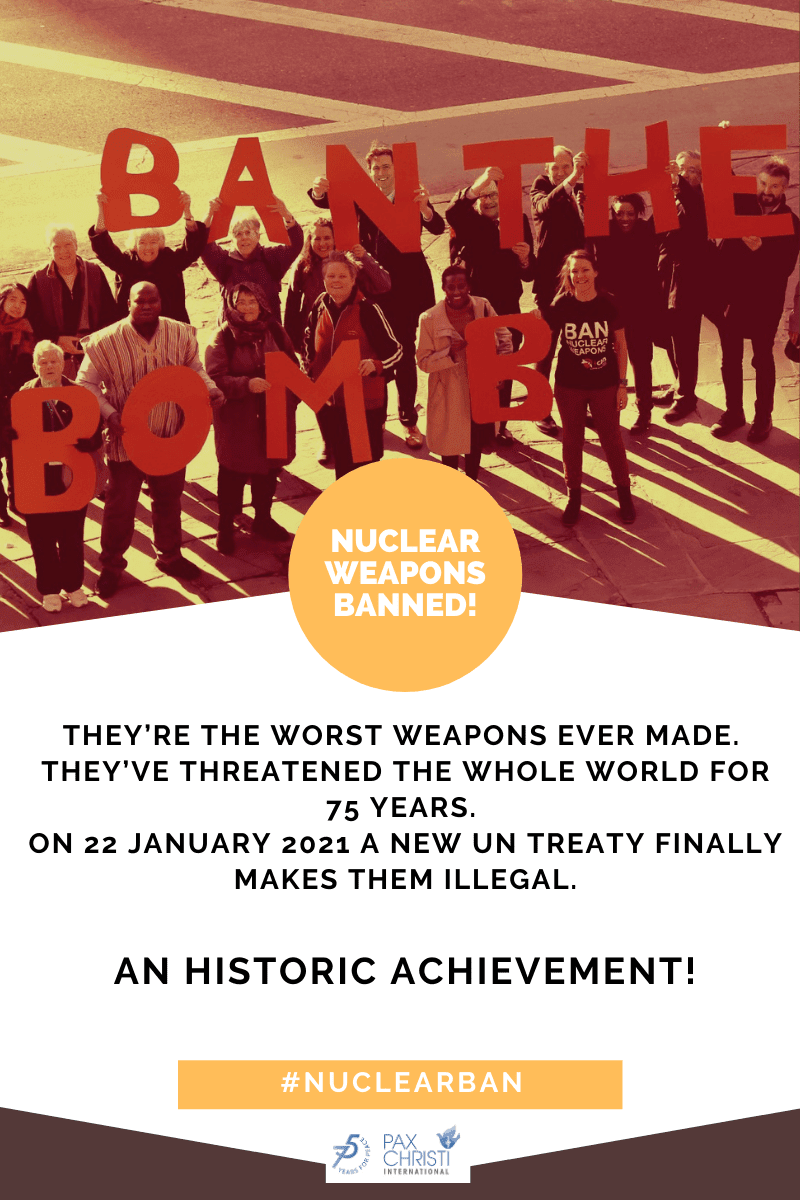