Symposium: One Church from every tribe, tongue and people 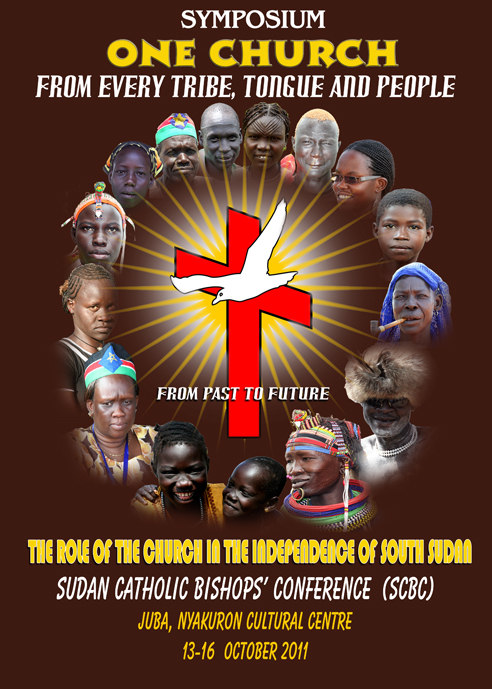 Rome, Monday, October 17, 2011
A Symposium entitled “One Church from every tribe, tongue and people” was held from 13th - 16th October 2011 at Nyakuron Cultural Centre, Juba, South Sudan, ending with the celebration of Mass at St Theresa's Cathedral, Katuor, Juba. It was organised by the Catholic Church as a gift to the wider Church and the nation, in celebration of the independence of South Sudan and the Church's past, present and future contribution.

More than 700 people participated in the Symposium, led by Cardinal Gabriel Zubeir Wako and Archbishop Paulino Lokudu Loru, including Catholic and Episcopal bishops, government officials, international experts and partners, representatives of the ecumenical community, the media, and priests, brothers, sisters and laity, both local and missionaries, from the Republic of South Sudan and the Republic of Sudan. Contributions from the participants were extremely valuable. Cardinal Zubeir urged that this Symposium should lead to action at national level and in the dioceses.

In reviewing the history of the nation, it became clear that there has been little serious academic study of South Sudan other than as a “historical backwater” of the old Sudan. History is written by the victors, and these tended to be the Anglo-Egyptians and northern Sudanese. Primary sources are now being unearthed, and it is time for South Sudanese to write their own history. Documents and archives should be returned to South Sudan, and we should interview our elders before their personal experience is lost.

Catholic Church history is dominated by the contribution of St Daniel Comboni and his missionaries since the 19th century. The spirit of Comboni is a gift which has shaped the Church: “Save Africa with Africans”. Special mention was made of other missionary societies, including the Mill Hill Missionaries, who served in Malakal and elsewhere since 1938. The personal testimony of several individual witnesses highlighted the role of the missionaries and the contribution which the Church made in a variety of fields including health and education. But we also heard about the suffering and trauma of the people of South Sudan, particularly women and children, and how the Church provided solace.

The local Church is the Body of Christ, the community in this place, made up not only of native South Sudanese but all those who have come to be part of the work of salvation and human liberation. The Church is universal. It includes the diaspora and those in the Republic of Sudan. It began when the first Sudanese Christian was baptised, it was nurtured by laity, catechists and teachers, and reached a new level when the first Sudanese priests were ordained. Missionaries were expelled, but the Church continued to thrive and officially became a fully autonomous local Church in 1974. Virtually all of the early southern leaders were educated by the churches, and included priests, some of whom lost their lives in the service of the people. The liberation struggle was not won only by those with guns, but by ordinary people, and by the churches which gave them  support.

Many southerners first came into contact with the Church in Khartoum. The Church gave them a sense of dignity and identity in a hostile environment, and encouraged reconciliation and forgiveness between tribes. Southerners returning to South Sudan have been educated and trained by the Church in the north, and will be an asset to the Church and nation.

The Symposium heard the history of the Sacred Heart Sisters and the Brothers of St Martin: their founding, their suffering during the wars, their vision, and the invaluable service they have provided to the people of Sudan in the fields of education, health and pastoral work. The formation of these and other local religious congregations was a major step forward in the growth of the Church. One particular expression of the local Church in South Sudan is Holy Trinity Peace Village, Kuron, Eastern Equatoria. Founded by Bishop Paride Taban as a response to his own life experience, it seeks to bring reconciliation and peace in an area where numerous tribes interact, and can serve as a model and inspiration for other parts of the country. A new model of mission is found in Solidarity with Southern Sudan, a collaboration of over 170 Catholic religious congregations who have come together to assist the Church of South Sudan with pastoral, health, education and agricultural work. Their counter-cultural “Passion for Christ, Passion for Humanity” is anchored in the prophetic dimension of Christian vocation.

A presentation of the history of the Episcopal Church of Sudan demonstrated many similarities between the two churches, and also included some reflections on ecumenical cooperation in Sudan.

A reflection on the new Sudanese countries and churches began with an appreciation of the unique credibility and moral authority which the church has due to its presence and role during the war. It will continue to have a public role. Issues still to be settled between the two new countries include oil, borders, citizenship, debt, etc, but these should not lead to a renewed war. Abyei remains as disputed territory due to disagreement about who should vote in the referendum. The Republic of Sudan is moving towards an Islamic state with no tolerance for cultural and ethnic diversity, and this could lead to more conflict. Two new wars have broken out, in South Kordofan and Blue Nile, in addition to the existing war in Darfur. Churches have been warning for years that the aspirations of the people of these areas were not met by the Comprehensive Peace Agreement, and that there was a real danger of further conflict. The ruling National Congress Party is under duress, and a new political reality is emerging as the armed and political opposition seek regime change. South Sudan had already made great strides during the 6 year Interim Period, and is on track to continue to develop. The transition from an armed liberation movement to a democratic government will take time, and expectations must be managed whilst still holding the government to account. This may prove a delicate balancing act for the Church, but at present good relations exist and should be institutionalised. Violence in South Sudan is tragic. Each different conflict has its own roots and dynamic, but most of the country is peaceful. The Church is involved in mediation processes, but development and trauma healing will also help to prevent conflicts.

There is only one pastoral priority for the Church in the two new countries: putting God at the centre of our being. We look forward to a vision of a flourishing Church, deeply rooted in its faith in Jesus Christ; a local Church that lives according to the principles of the Gospel; “the courage to forge new paths in responding to the changing circumstances and conditions facing the Church in her call to proclaim the Gospel today”. In the new evangelisation, the laity will be in the forefront. As we ask, “who are we and how do we read the signs of the times?”, new models of Church will emerge and new ways of addressing issues. In preparation for the Symposium, an informal survey of people's expectations of the Church was carried out. Their voice was heard, and reinforced the messages of the speakers and participants of the Symposium.

The government of the Republic of South Sudan expressed its appreciation for the work that the Church has done in bringing about the independence of the new nation, peace, delivery of basic services, civic education and much more. The government welcomes the Church's role and urges it to continue.

A recurring theme throughout the Symposium was love. In his opening address, Archbishop Paulino Lokudu Loru pondered: “Is love part of politics, money, projects in our nation? Without love, these are useless”. In the words of the Sacred Heart Sisters, “it is only the Love of Christ translated into service for the poor which will bring a real change to the country”. Archbishop Paulino closed the Symposium with a reminder of what the bishops said before the referendum: “Sudan will never be the same again!”

In due course the content of the Symposium will be published in the form of a book.