Assembly of the Union of Superiors General in Rome 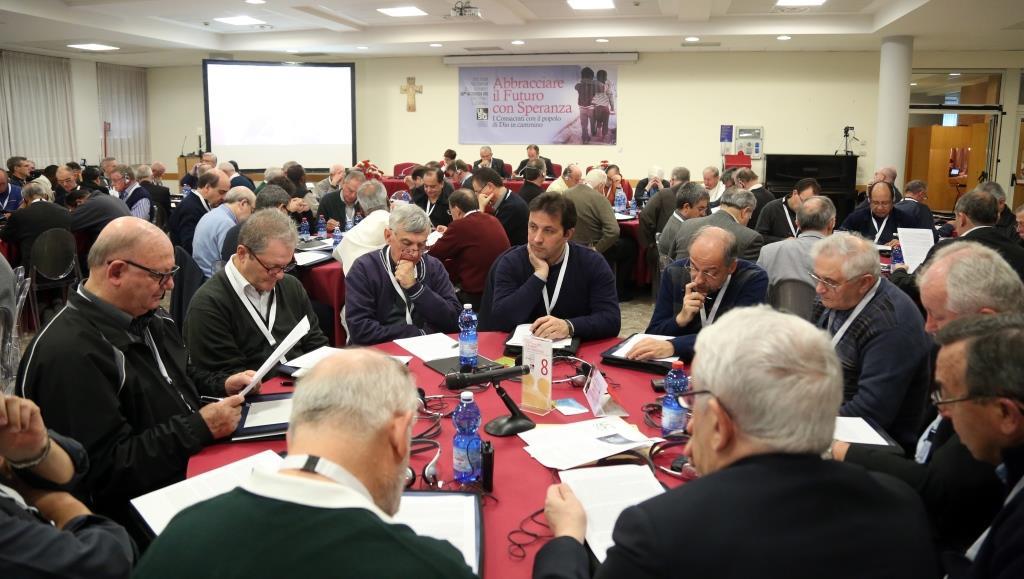 Monday, November 30, 2015
Last Friday ended the 86th Biannual Assembly of the Union of Superiors General (USG). The theme of the assembly was “To embrace the future with hope. The consecrated persons on a journey with the people of God”. The participants – including the Superior General of the Comboni Missionaries, Fr. Tesfaye Tadesse Gebresilasie –, meeting from 25 to 27 November at the Salesianum in Rome, reflected on the recent Synod on the family and elected the new president of the USG, in the person of Fra’ Mauro Jöhri, minister general of the Capuchin friars minor. Fra’ Jöhri succeeded Fr. Adolfo Nicolás Pachón, superior general of the Society of Jesus. Pictures: ANS.


The work of the 86th biannual Assembly of the Union of Superiors General (USG) ended on Friday, November 27, after the election of the new president, vice president and members of the Councils of the 16 and 18 and after a reflection on the synthesis that Rev. Francesco Cereda and Bro. Enzo Biemmi drafted on the basis of assessments made, after the report took place in the second day of work, by the secretary general, Fr. David Glenday, mccj, on the three “historic"  years, from 2012 to 2015.

To the Ordinary Council
of the General Secretariat
for the Synod of Bishops:

The members of the Union of Superiors General who participated in the XIV Synod of Bishops very much appreciated the opportunity to take part in this important event in the life of the Church. They presented a report and reflection to the Assembly of the USG in November. The USG would like to offer these reflections and suggestions to you, the Ordinary Council, in preparation for the next Synod of Bishops.

We found that the III Extraordinary Synod in 2014 which prepared for the XIV Ordinary Synod was very helpful. In a certain sense, the Synod on the Vocation and Mission of the Family took place in two important moments. We encourage you to continue this method for the next Synod.

We also appreciated very much the three week process which treated the three parts of the Instrumentum laboris with a complementary structure of interventions in the Congregations and small group discussions as an integral process. We found that this helped a more fruitful preparation of the final document, as well as a more participative process which engaged all the synod members. We appreciate and affirm the use of the group discussion in the Cercoli minori as an integral part of the Synod Process, and suggest that it continue to be part of future Synods from the beginning of the process.

We would like to make four suggestions about possible future subjects for the Synod to consider:

1. Synodality –and an “Ordo Synodo” per il Popolo dei Dio

In his discourse at the celebration of the 50th anniversary of the Synod (October 17), Pope Francis presented a vision and model of synodality as a process for the Universal Church. A future Synod could consider how best to implement this process and offer guidelines for all levels: parishes; dioceses; Conferences of Bishops at the national and continental level; Universal Church. What might be appropriate guidelines for greater participation of the clergy, religious and laity? How could this process be applied and developed in practice?

3. Our Common Home and Laudato si’

In practice, how can the Church at all levels continue the reflection leading to action in areas of ecology and the care for our common home? How might the laity help the Church to change its way of looking at the world?

At the XIV Ordinary Synod, questions of the ministry of the laity as the agents of evangelization, and especially, the role of women in decision-making at all levels in the Church, were often high-lighted and are clearly affirmed in the final document. What could this mean in practice?

We also strongly affirm the nomination of a Brother Superior General as a Synod member, and encourage the next Synod to name some members of the USIG as delegates to the Synod.
Thank you for your consideration of these reflections and suggestions.

The work of the 86th biannual Assembly of the Union of Superiors General (USG) ended on Friday, November 27, after the election of the new president, vice president and members of the Councils of the 16 and 18.