Fires on the African continent and those of the Amazon 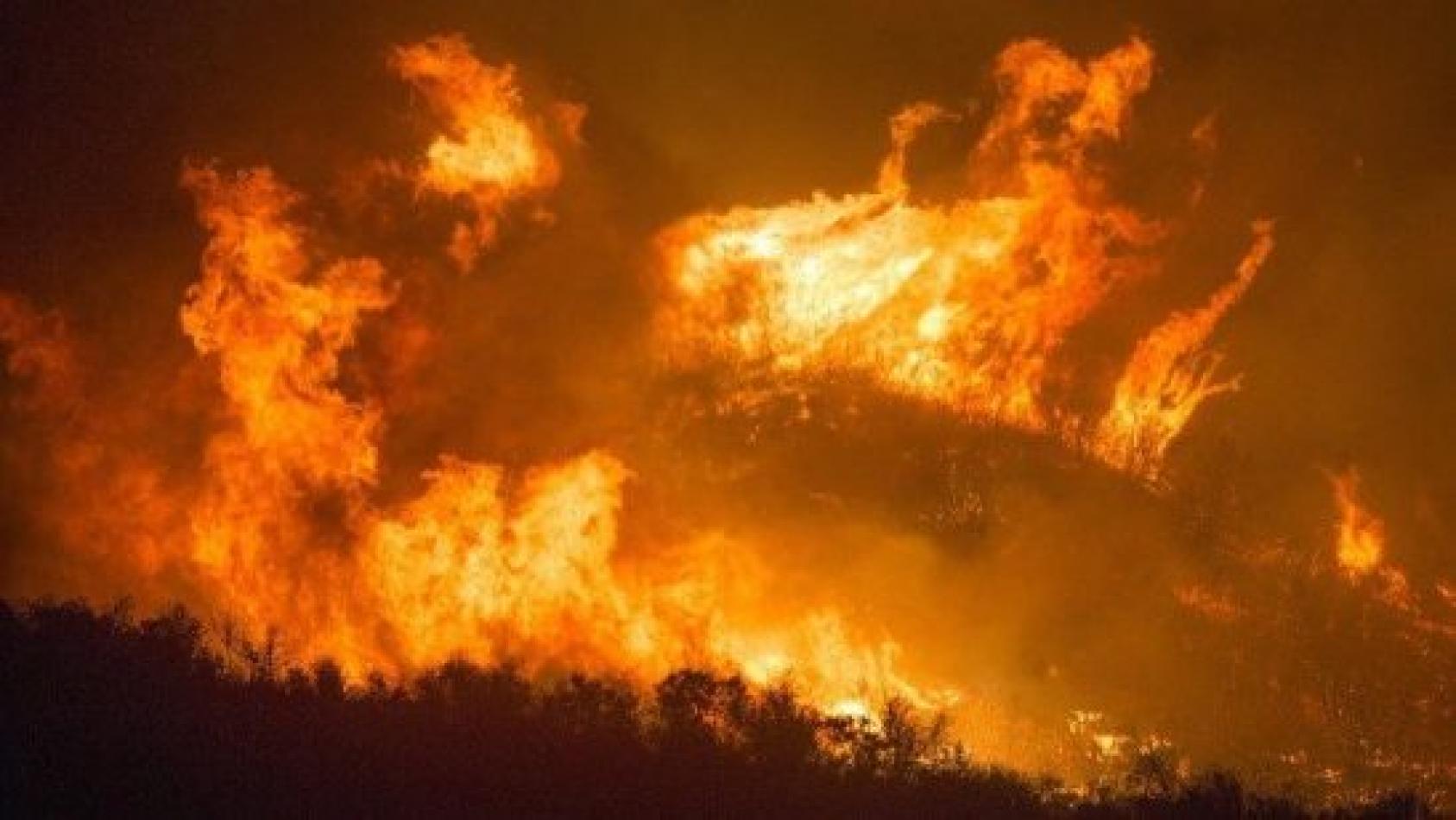 Friday, August 30, 2019
As the world has watched with fear and fascination the fires burning in Brazil’s Amazon rainforest, satellite images show a far greater number of blazes on the African continent. But there are some differences. NASA has said Africa is home to at least 70% of the 10,000 fires burning worldwide on an average August day, though the agency says the number of fires is consistent from year to year.

Fires in Africa could be an environmental threat in future

While French President Emmanuel Macron has said he is considering launching an international campaign to help sub-Saharan African countries fight fires, experts say the situation there is different and not yet a growing problem — though it could become a threat in future.

Angola had almost three times more fires than Brazil over a period last week, according to NASA satellite imagery, which indicated around 6,000 fires in Angola, more than 3,000 in Congo and just over 2,000 in Brazil.

Though Angola and Congo dominate in numbers of fires, they often occur in sparsely wooded savannas and on fields cultivated by small farmers, making them less of a concern for deforestation than those in the Amazon, said Sally Archibald, a professor at Wits University in Johannesburg.

"There are fire management questions in these (African) ecosystems, but fire is part of their ecology," said Archibald, who studies fire management and savanna dynamics.

"In South America, the equivalent non-forest woodlands have been largely converted to soybean agriculture already, but in Africa, they are largely untransformed."

Savanna fires release carbon dioxide, but within a year, the grass regrows, sucking much of the carbon out of the atmosphere again. The fires may push toward the forests, but are mostly snuffed out at that border, Archibald said, unless trees are cut down making tropical forests more vulnerable.

When a tropical forest is burned, the trees die, and the carbon dioxide goes up and doesn't return to the system quickly.

"The main message is: yes we have a lot of fire, but it's not bad and can be very good for the ecology," she said. "We don't know how many deforestation fires we have, but the best evidence is that our forests are not decreasing, they are in fact, increasing."

Most deforestation occurred in West Africa in the 19th century, Archibald said, adding that Cameroon and Gabon show increased forestation.

However, ecosystems such as the Miombo Woodlands, which covers 10% of the continent over nine countries do need to be managed. These woodlands push up against forests, and because of an increase in population, more people are planting crops along the edges.

The Miombo Network, an advisory and sustainability group that Archibald is a member of, is working with the World Bank and policymakers to make sure there is proper fire management in these areas, she said.

"Fires are therefore often a critical component of these ecosystems and are not perceived as harmful by local communities," he said. "Indeed, fires are often used for agricultural purposes, for example, to keep the landscape open to support livestock, as well as sometimes as part of shifting cultivation."

Andela said deforestation is not occurring on the same scale as in South America.

"In part that may be simply due to limitations of existing infrastructure and lack of access to global markets, processes that drive large scale agricultural expansion elsewhere," he said. "It is therefore certainly a possibility that this may change in future."

at the 2015 United Nations climate change conference said agricultural practices known as "slash and burn" need to be better managed, citing the over 3,000 fires in Congo.

"It is a great threat to our forests," he said of the technique used by farmers in Congo and elsewhere in sub-Saharan Africa. "You need an ambitious global program, or you train people to use other practices for people to go into intensive agriculture. You have to organise these small farmers by giving them fertiliser, seeds."

The majority of those fires occur in tropical regions of Africa. Using satellite data from the agency's Copernicus program, researchers said in a December study that the total area burned in 2016 was 4.9 million square kilometres (1.89 million sq. miles).

Most of the fires are 100 hectares (247.1 acres) or smaller in size. Other areas with extensive biomass burning are Australia, South America and Southeast Asia.

Globally, the amount of area burned declined by about 25% over the past two decades, largely because of savannas and grasslands being converted to agriculture, said James Randerson, an earth systems scientist at the University at California, Irvine.

Randerson said the tropical forests of Africa have yet to see widespread deforestation driven by industrial-scale agriculture that is transforming parts of the Amazon. But, he said, global economic forces could potentially change this as countries in East Asia, particularly China, seek to expand trade relations with African nations.

African grasslands are meant to burn:
We can’t let this distract from the Amazon fire

Catastrophic fires in the Amazon rainforest made global headlines, but since then NASA has noted that right now there are actually many more fires in parts of Africa than in Brazil. This has led some to question whether double standards are being applied – are we either ignoring an even larger environmental disaster in Africa, or are the Amazon fires being highlighted as a handy way to criticise a Brazilian leader already unpopular among environmentalists?

I’ve studied the ecological impacts of fires in East Africa for more than a decade, along with colleagues from around the world. So, are these fires an Amazon-style disaster?

Fire is an essential part of the savannah

The first thing to know is that the impact of a wildfire depends more on where and what it is burning, than on how big it is, or indeed how many fires there are.

The vast majority of the African fires currently burning seem to be in grasslands, in exactly the places we expect to see fires at this time of year. These fires are usually lit by cattle farmers as part of their traditional management of the savannahs where their animals graze. Some fires are started to stimulate new growth of nutritious grass for their animals, others are used to control the numbers of parasitic ticks or manage the growth of thorny scrub.

Without fires, many savannahs (and the animals they support) wouldn’t exist, and lighting them is a key management activity in many of the iconic protected areas of Africa. For instance the Serengeti in Tanzania is known worldwide for its safari animals and awe-inspiring wildebeest migration – and our work shows that around half of its grasslands burn each year.

I’m often asked whether these fires in Africa are natural, and if they should be part of a conservation management plan. I usually answer with a question of my own: what is “natural” in a continent where hominins – our ancestors and closest relatives – have been lighting fires for a million years?

The savannah has co-evolved with hominins lighting fires, probably first to encourage grass to attract animals which they could hunt, Then later as pastoralists for their own animals to graze. Animals and plants of the savannah are adapted not only to survive these events, but some actually need them: the beautiful Temminck’s Courser is a bird with ash-black eggs that nests only in recently burned grasslands.

Last year, I led research which helped show how important fire is to biodiversity in these areas. We looked at those parts of the savannah that had a lot of different types of fires – some big, some small, some hot, some cool and sometimes no fire at all – and found they had up to 30% more diverse mammal communities and 40% more diverse bird communities.

And equally importantly, fires in the savannah burn mainly dry grasses that regrow each year: the CO₂ released by fires in grasslands is reabsorbed by the growth of new grass the next year, meaning such fires are nearly carbon-neutral within a year.

Are the forests burning?

In contrast to savannah fires, forest fires are a real problem whether in Africa or the Amazon. Tropical forests are usually warm, wet places with no dry grass to carry fires, so they don’t usually burn. However, if they are dried out, either by drought or by deforestation creating sharp edges that allows drying wind into them, they can burn catastrophically.

As the plants and animals of these forests are not fire adapted, many die and the ecosystem may take decades to recover. Equally, and in stark contrast to fires in grassland ecosystems, the carbon released by the fires will take decades to be re-absorbed, meaning forest fires have a huge impact on global emissions. Although there probably are fires in African forests at the moment (there are always some) there isn’t an obvious increase in forest fires in the continent – while all the evidence suggests forest fires in the Amazon are much more abundant this year than previously.

The Amazon is the real story

Unfortunately, it seems that in contrast to Africa’s fires, the fires in the Amazon are burning in forest areas where the cost to biodiversity, indigenous people and carbon is likely to be extremely high. There also seems to be good evidence that there is more burning this year than previously – and there has been no drought, so it probably reflects increased efforts by people setting fires in these regions.

This can’t be entirely down to signals coming from Brazil’s far-right president Jair Bolsonaro of course, as the fires are burning in more countries than just Brazil, but it seems clear the story in the Amazon is the real one, while outrage over fires in Africa may just be a distraction.
Colin Beale – Senior Lecturer in Ecology, University of York