Coronavirus in Peru. Msgr. Castillo Mattasoglio (Lima): “This pandemic is a challenge to individualism, pastoral care, and politics” 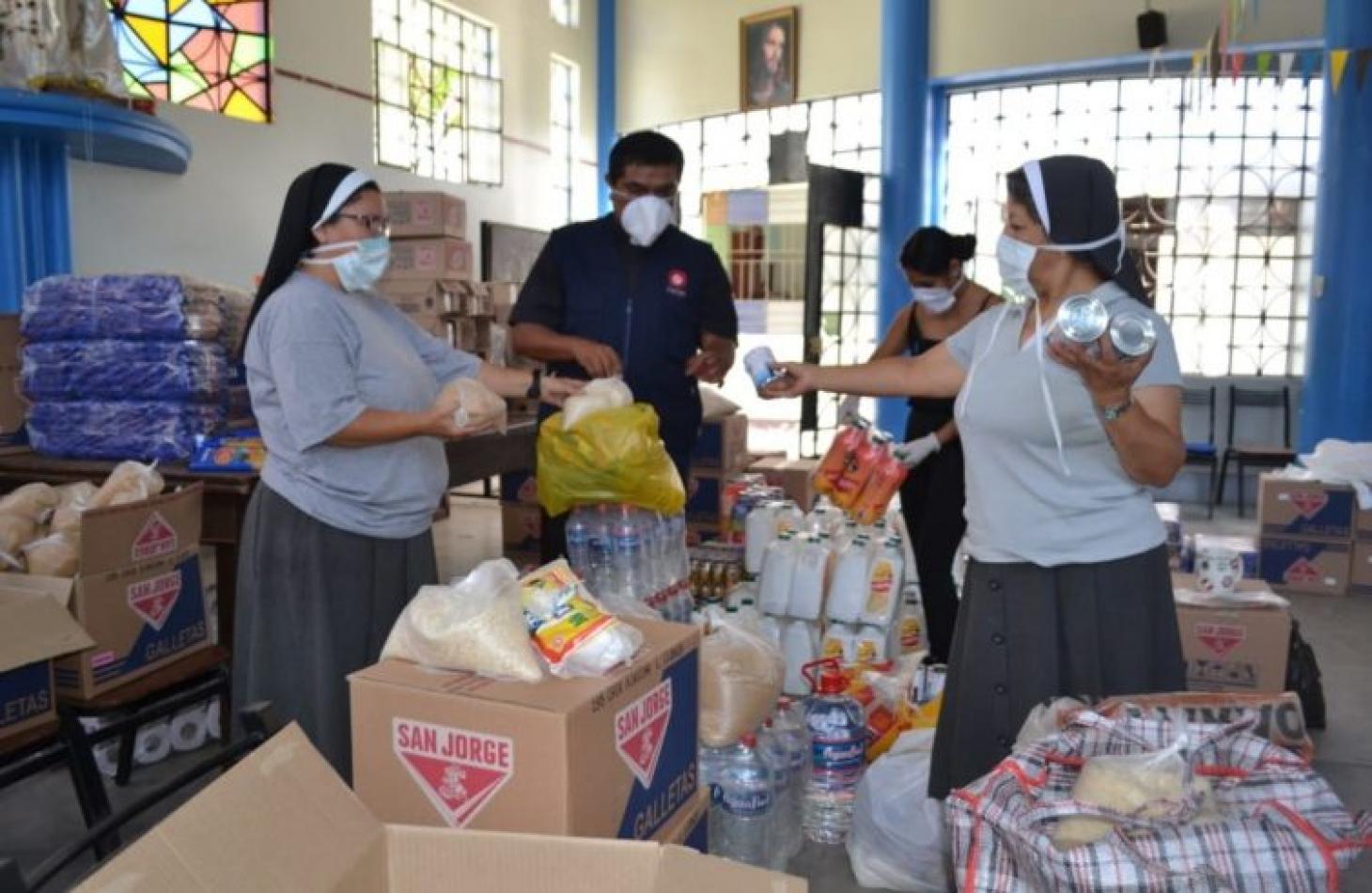 Monday, May 11, 2020
The coronavirus in Peru hit a country afflicted, as the whole continent, by widespread pockets of poverty and inequality. On top of this, there is also a high degree of individualism, mistrust, fragmentation of institutions and corruption. [SIR]

In this respect, in this interview with SIR, Msgr. Carlos Castillo Mattasoglio, Archbishop of Lima, stressed the need for a profound moral and cultural transformation, where the Church takes the lead focusing on the community dimension, rather than on the idea of the “individual salvation of the soul”.

There was immediate and coordinated action at the ecclesial level, with an explicit mandate to the auxiliary bishop. Yet also a “long-term” reflection is needed in order to meet the cultural, social and ecclesial challenges posed by the outbreak of the pandemic. Indeed, in Lima Monsignor Carlos Castillo Mattasoglio, for almost a year and a half primate of Peru, serving as archbishop of the country’s largest diocese, is considered both pastor and man of culture, “an intellectual with a heart”. “Heart” and  “mind ” are certainly needed right now, and will be needed in the coming future, in Lima, Peru and beyond. The greater city area, over which the capital extends with the port city of Callao, has one of the highest number of cases of coronavirus infection in Latin America, after Sao Paulo in Brazil. In Peru, the number of people infected has now exceeded 50,000 for days, with a death toll of over 1,500, due to an escalation leading to a twofold increase in the number of victims in a week.

Your Excellency, the infection is spreading in Lima. What are the most serious problems?

The metropolitan area is registering the most severe outbreak of Covid-19. We are facing the combined impact of the spreading pandemic and growing poverty. Quarantine has been imposed for the last two months. I myself has just returned from Rome and I was forced into isolation. I must say that the measures were taken at the right time, it was the right decision. But the houses of the poor are not made to undergo quarantine, the poor need to go outside to live, they live off the street. In fact, poor people have gone out often, for example to open markets. They can hardly manage any longer, and widespread poverty prevents full compliance with prevention measures. As a result, we are seeing an increase in the number of infections and deaths. It must be said that many people are also suffering from cultural poverty, lack of education.

What measures have you taken as archdiocese church?

Already at the beginning of the synodal phase of our archdiocese, we endeavoured to revitalize Caritas and social ministry. We established contacts with some fifteen civil society organizations, prior to the emergency, a valuable activity. Now we are actively involved in the distribution of food parcels, collected in warehouses owned by the Church, with the precious help of a large group of volunteers. We gave priority to the poorer areas and parishes, finding a great capacity to mobilize efforts. There is also a widespread need to listen and to be listened to. I have entrusted Monsignor Guillermo Elías, auxiliary bishop, with the coordination of the various aspects related to the pandemic. Before this emergency there was an idea of priests closely associated with the celebration of Mass alone. However, today priests are also listening to people, answering phone calls. We were fortunate not to have cases of infection among our priests and we decided that they should not visit the sick immediately, as they risked becoming spreaders of the infection, whereas Catholic nurses and doctors have been authorized to offer Holy Communion.

Masses have been suspended also in Peru. How do the communities cope with this situation?

As in other countries, there was a period of uncertainty, after which public celebrations were suspended everywhere. Now there are plans to reopen, but this does not mean that there are no more risks. I found it interesting that, apart from few exceptions, people understood the situation. For instance, they did not request that the procession of the Lord of miracles take place.

Prayer in households was of great significance.

Most importantly, we are called to worship the Lord “in spirit and truth”. It has always struck me that in the fourth Gospel John replaces the moment of consecration with the washing of the feet. In the light of the signs of the times, perhaps we should also rethink the ways in which we can celebrate the sacrament, including creatively.

What message can the Church bring at this dramatic moment to Peruvian society?

I believe that Peru’s great illness is individualism, partly caused by a liberalist culture that followed the Fujimori dictatorship, preventing the emergence of a network of grassroots organizations, often called “intermediate bodies”. But individualism has also penetrated our faith. Basically, “saving my soul” has emerged as the main objective. Yet this is also what the evangelicals say. In public life attention was given to nascent life, to the fight against abortion, but not to an idea of community, of building a future together. For this reason I firmly believe that this pandemic is a challenge to individualism, and, at the same time, to both our pastoral work and to politics.

How is the political world responding to this challenge?

I have to say that the government has taken courageous decisions, in its choice to give a minimum wage to those affected by this crisis I saw an echo of Pope Francis’ proposal, contained in his recent letter to the popular movements, regarding a universal basic wage. Thirty-five year old Maria Antonieta Alva Luperdi, the Minister of Economy chosen by President Martín Vizcarra, is gaining prominence. While formed on the principles of liberalism, she understood that, as the Pope says, this economy kills. In fact, President Vizcarra surrounded himself with a group of young intellectuals. Admittedly, we carry the burden of a bitter legacy, a historic neglect of public health services, of the weakest areas, of the Amazon region. The greatest challenge today is to rethink the economy by placing it under democratic control. Another challenge is to extend democracy, as we are taught by Church Social Doctrine, to include associations and civil society at large. Peru has a social obligation to rebuild. I am glad that some mayors have also listened to society. The politicians who have governed this country up to now didn’t listen to anyone, they claimed they knew everything, and the poor, the peasants… in their eyes has no value.

This is taking place in a fragmented system, as evidenced by the recent parliamentary elections, with many politicians being sent to prison. Next year the Country will be facing a very difficult presidential election…

We have a number of populist leaders sitting in Parliament, and there is a concrete risk of caudillism, an authoritarian drift. There are no consolidated parties, there are groups like the “Israelites of the new universal pact”, a fundamentalist and millenarian sect. We are moving towards difficult elections and we urgently need to find leaders who are not manipulators. The incumbent President Vizcarra proved himself skilful, having already successfully governed the Moquegua region, but he will not run again. Furthermore, there is a deficit in citizenship education, with the risk that the situation could develop as it did in Brazil.

Are there grounds for optimism?

We are probably experiencing the most dramatic events of the last two centuries, excluding the World Wars. Having a Pope like Francis is important. He has a special insight into things and with the help of the Holy Spirit he helps us find a way out. I believe that the season of global liberalism is over. We must read the signs of the times. The Pope is guided by the Lord and gives us strength. We will overcome this if we our thoughts are deep and not frivolous. Frivolity has also done much damage in the Church.
[Bruno Desidera - SIR]