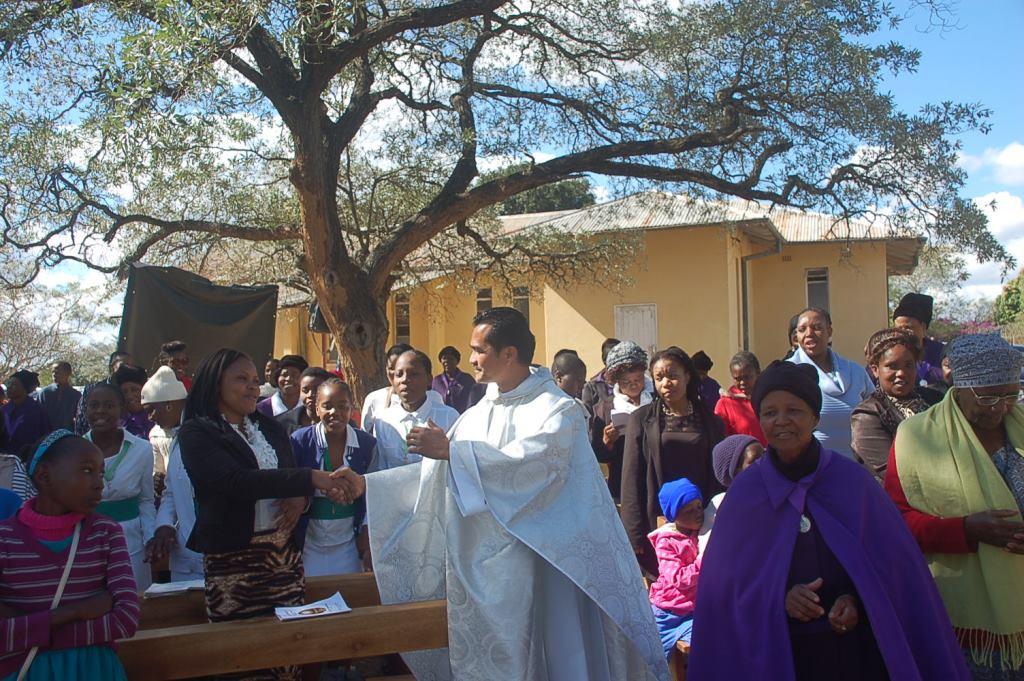 Saturday, September 26, 2015
Stating that the South African government has “dragged its feet” on anti-corruption reforms, the Justice and Peace Commission of the Southern African Catholic Bishops’ Conference has lent its support to an anti-corruption march scheduled for September 30. “We believe that the government is not doing enough to demonstrate that it is serious in its efforts to prevent and combat corruption,” said Bishop Abel Gabuza of Kimberley, who leads the commission. “Political rhetoric is often not accompanied by decisive action.” Other things that you could do as a parish and religious community during the masses on Sunday, 27th September 2015. Consider saying a prayer against bribery and corruption. We have attached a prayer. During confiteor (I confess), consider inviting the congregation to do a self-reflection and seek conversion from our own involvement in bribery and corruption. In the picture: Fr. Janito Joseph Aldrin Palacios, Comboni missionary, in South Africa.

The Justice and Peace Commission for the Southern African Catholic Bishops’ Conference (SACBC) has endorsed the anti-corruption march on 30 September and has questioned Government’s seriousness to curb corruption. “We believe that the Government is not doing enough to demonstrate that it is serious in its efforts to prevent and combat corruption. Political rhetoric is often not accompanied by decisive action,” says Bishop Abel Gabuza, Chairperson of the Justice and Peace Commission. Justice and Peace is particularly concerned about the lack of decisive action in implementing the decision of the Constitutional Court calling for effective measures to enhance the independence of the Directorate for Priority Crime Investigations (the Hawks). In 2012 the Constitutional Court found that the Hawks were not adequately independent from political interference and ordered rectifying legislation.

Adds Bishop Gabuza: “Government has dragged its feet when it comes to the restructuring of the Hawks to protect it from undue political interference as directed by the Constitutional Court.

“We have always maintained that our country will only succeed in combating corruption when anti-corruption institutions are adequately protected from executive and political interference; when competent people are appointed to head these institutions; and when the high-level politicians and those politically connected are held to account for corruption.”

In May this year Police Minister Nkosinathi Nhleko appointed a task team to oversee the process of strengthening the independence of the Hawks. The task team has been given April 2016 as a target for completion of institutional reform of the Hawks.

The Minister has promised that the reform shall include establishment of the Hawks as an independent budget programme to ensure that there are no malicious budget cuts when the institution is investigating powerful political officials.

The Justice and Peace Commission believes that the mandate of the task team should also include advising the Police Minister on the institutional location of the Hawks that is best suited for its independence and effectiveness as an anti-corruption institution.

Questions have been raised about its location in the South African Police Service (SAPS), which allows the National Commissioner considerable influence over members.

PRAYER AGAINST BRIBERY AND & CORRUPTION
IN SOUTH AFRICA

Father in Heaven, You always provide for all your creatures so that all may live as you have willed. You have blessed our country South Africa with rich human and natural resources to be used to your honour and glory and for the common good of all South Africans.

We are deeply sorry for the wrong use of these your gifts and blessing through act of injustice, bribery and corruption, as a result of which many of our people are hungry, sick ignorant and defenseless.

We believe that You alone can heal us and our nation of this sickness. We therefore beg you to touch our lives and the lives of our leaders and people so that we may all realise the evil of bribery and corruption and work hard to eliminate it.

Raise up for us God fearing leaders who care for us and who will lead us in the path of prosperity, integrity and the common good.

We ask the through Jesus Christ our Lord. Amen.

(Adapted from Catholic prayer against Bribery and Corruption in Nigeria)