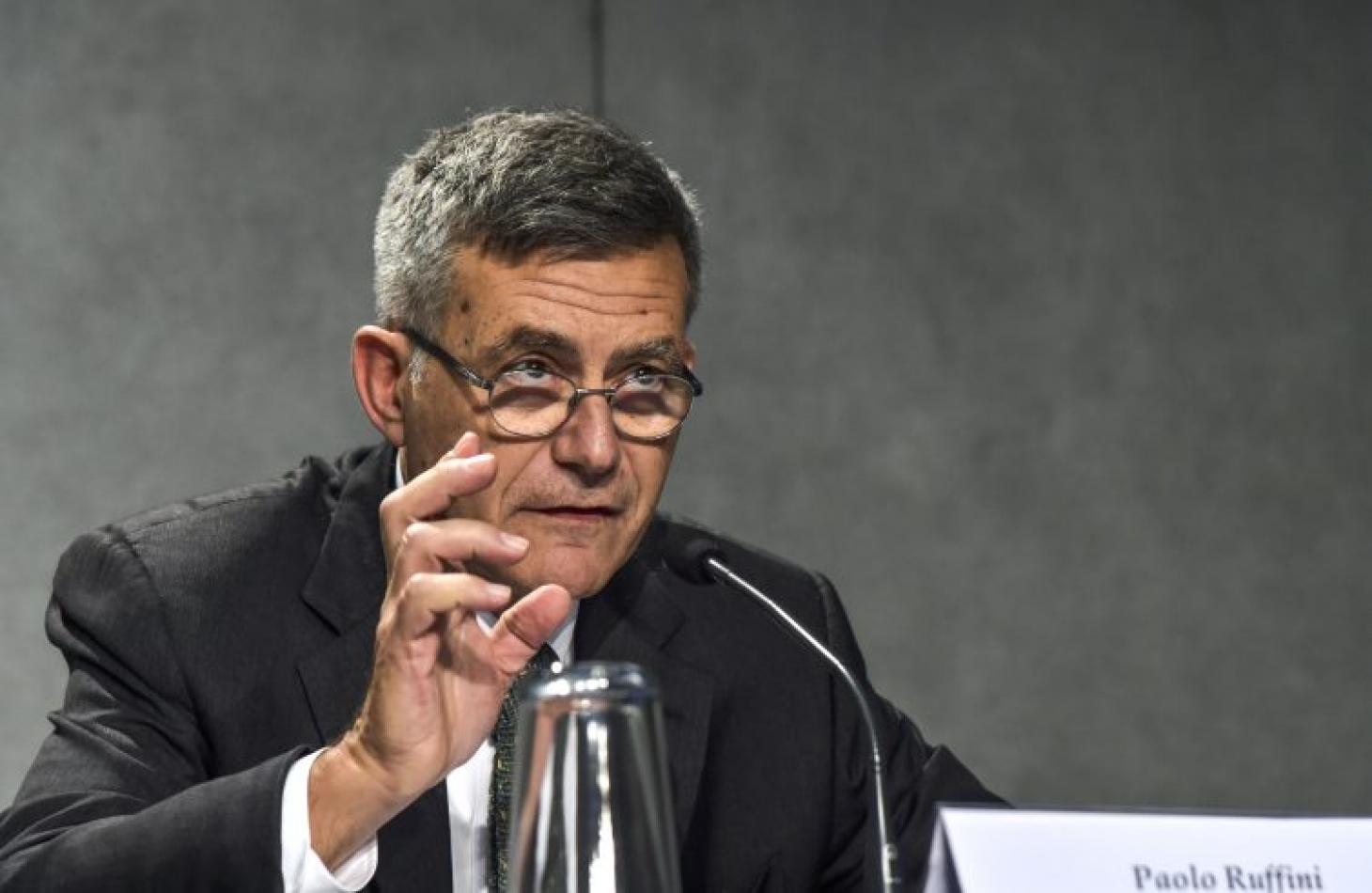 Wednesday, January 29, 2020
Paolo Ruffini, Prefect of the Vatican Dicastery for Communication, comments on Pope Francis' Message for the 54th World Communications Day with the theme “That you may tell your children and grandchildren' (Ex 10:2). Life creates history”. [Amerigo Vecchiarelli – SIR]

Paolo Ruffini, Prefect of the Vatican Dicastery for Communication, comments on Pope Francis’ Message for the 54th World Communications Day with the theme “That you may tell your children and grandchildren’ (Ex 10:2). Life creates history”

Why did the Pope, mindful also of his deep bond with the community to which he belongs, feel the need to move from the idea of communicating to that of “storytelling”?

Because stories are woven into our identities. In the beginning was the Word. And – as the Pope writes in his message – “so as not to lose our bearings, we need to make our own the truth contained in good stories. Stories that build up, not stories that tear down; stories that help us rediscover our roots and the strength needed to move forward together.”

Immersed in the daily flow of news, called every day to select news items. As journalists, when do we switch from (important) communication to life-giving storytelling?

When we manage to trigger a rational and engaging response to this uninterrupted flow. When we give it a positive dynamism, a perspective. When besides the problems we identify the ways out, the possibility of redemption beyond evil. When we succeed in restoring unity to the fragmented globalization of our present time.

If not, communication without a story, without meaning, without truth will ultimately consume itself, thereby annihilating its content. It becomes a trap that devours the soul and the intellect of those forced to stay connected constantly in order to exist, which leads to self-alienation.

Being immersed in history, in everyday stories, in order to become experts in real life. How can this be done?

In an interview, Christiane Amanpour once said, “The task of the reporter is to write a story in a situation where truth isn’t always clear.” She added that the only exclusive option left for us to defend is the one which derives from an authentic, direct relationship with people.” I believe she meant to say that truth must always be sought. And that this search arises from investigating reality. That is, from a journey into the stories that make History. For the Christian-inspired media outlet this means shunning the temptation to present ourselves as a separate world and of considering ourselves as a mirror that is content with its self-narration.

Telling our story to God means first of all to embrace it, rather than rejecting it by imagining a better one. What should we do as believers and specifically as media workers, so as to be aware or at least able to tell God our story?

In my view this awareness involves being aware of the limits. Telling our story to God means recognizing God, as only the pure of heart know how to do. This reminds me of Pope Francis’ biblical reference in Lampedusa at the beginning of his pontificate. “Adam, where are you?”: Adam lost his bearings, his place in creation, because he thought he could become powerful, able to control everything, to be God. Harmony was lost and man erred. Unity became division.

Man makes mistakes and this is replicated in the relationship with the other person who is no longer seen as the brother to be loved, but as someone who interferes with my life, my well-being.

God asks a second question: ‘Cain, where is your brother?’” Rediscovering ourselves as brothers is hard today. It’s a process. And the important thing – as Don Primo Mazzolari said – is to avoid mistaking the journey for a destination and acquisition point.

Sacred Scripture, the ‘story of stories’, is a paradigm for interpreting and decoding reality in that it tells us what should be done to avoid the risk of self-centredness and consequently of speaking to ourselves alone.

The Bible is not a closed story. It is the word of God speaking to us today. It asks us to live our present time with God’s gaze. In this light, communicators are asked to interpret and decode reality through God’s gaze. The gaze of Jesus – Pope Francis said (Message for the 30th World Youth Day) – is not a neutral one — or worse, a cold and detached one, because Jesus always looks with the eyes of the heart. Thus in order to see things beyond their appearance we must use our hearts as well as our eyes. Being self-referential is the opposite of God’s gaze. It’s an effect of what the Pope calls ‘cardiosclerosis’.

Storytelling is often seen negatively, even in the context of the Church, because it is combined with a political narrative whose sole purpose is manipulation for electoral purposes. But is it really so?

Not all stories are good stories, the message says, but is it worth narrating the bad ones too? And if so, why?

Bad stories are stories poorly told, those that don’t seek the truth but manipulate it; those that don’t expose the falsehood but make an instrumental use of it. When I was a young journalist a senior colleague told me that I needed to get used to never discard a catchy headline in order to be true to the facts. He was joking, but not that much. Yet, I never got used to it. Neither as a journalist nor as a media user.

I always thought that catchy headlines, if they’re fake, are bad headlines. They lead us astray.

I think that’s what the Pope is saying. “Evil stories” are not those that investigate evil in order to fight it but those that weave evil into the story itself and in so doing “weaken and ultimately sever the fragile threads of coexistence.” The Pope invites us to discern and reject this type of narrative.
Another question is whether or not evil is also worth narrating. Here the real problem is not whether to narrate it, but how. I would like to quote from a beautiful interview with Lucio Brunelli, my extraordinary travelling companion in the years I worked at Tv2000, to describe the “how”, as I couldn’t say it better. “Reality cannot be ignored by those who want to inform. You can’t narrate a dream world. We wouldn’t be credible witnesses. As professionals, as people, and as Christians. I am passionate about the Catholic faith’s ability to reach out to reality, with a gaze that does not censor anything and that indeed, precisely in the ‘signs of reality’ finds continuous confirmation of the truth that man can only be saved by Christ. Whether as presence or as absence, as grace of witness or, more often, only as emptiness of anger and nostalgia, indeed all reality is drawn back to Him. So reality can hurt, but ultimately a believer will never be afraid of it. The gaze of the narrator is what makes the difference.”

How can real life be narrated if the story we are telling intersects with the sins of the clergy, and how can readers be reassured when such communication or story is likely to create a scandal?

When the story we are telling intersects sin, crime, and evil, our story must not aim to hide, to cover up, to deceive. It must be truthful. We all know that evil exists. And we all know that sometimes it is manifested in betrayal by those we expected never to betray us. It happens in different ways in everyone’s life. But unfortunately, it happens. There are two ways to deal with evil. One is to surrender: to ( wrongly ) assume that evil has won. The other is to react, to believe in the dynamism of good, of beauty, of righteousness. To believe in the possibility of redemption. Acting for good. This is the story of humanity. Seeing it through God’s eyes allows our story to be included in the path towards the personal and collective redemption of our history.
[Amerigo Vecchiarelli – SIR]