Vietnam: The art of weaving “Zeng” 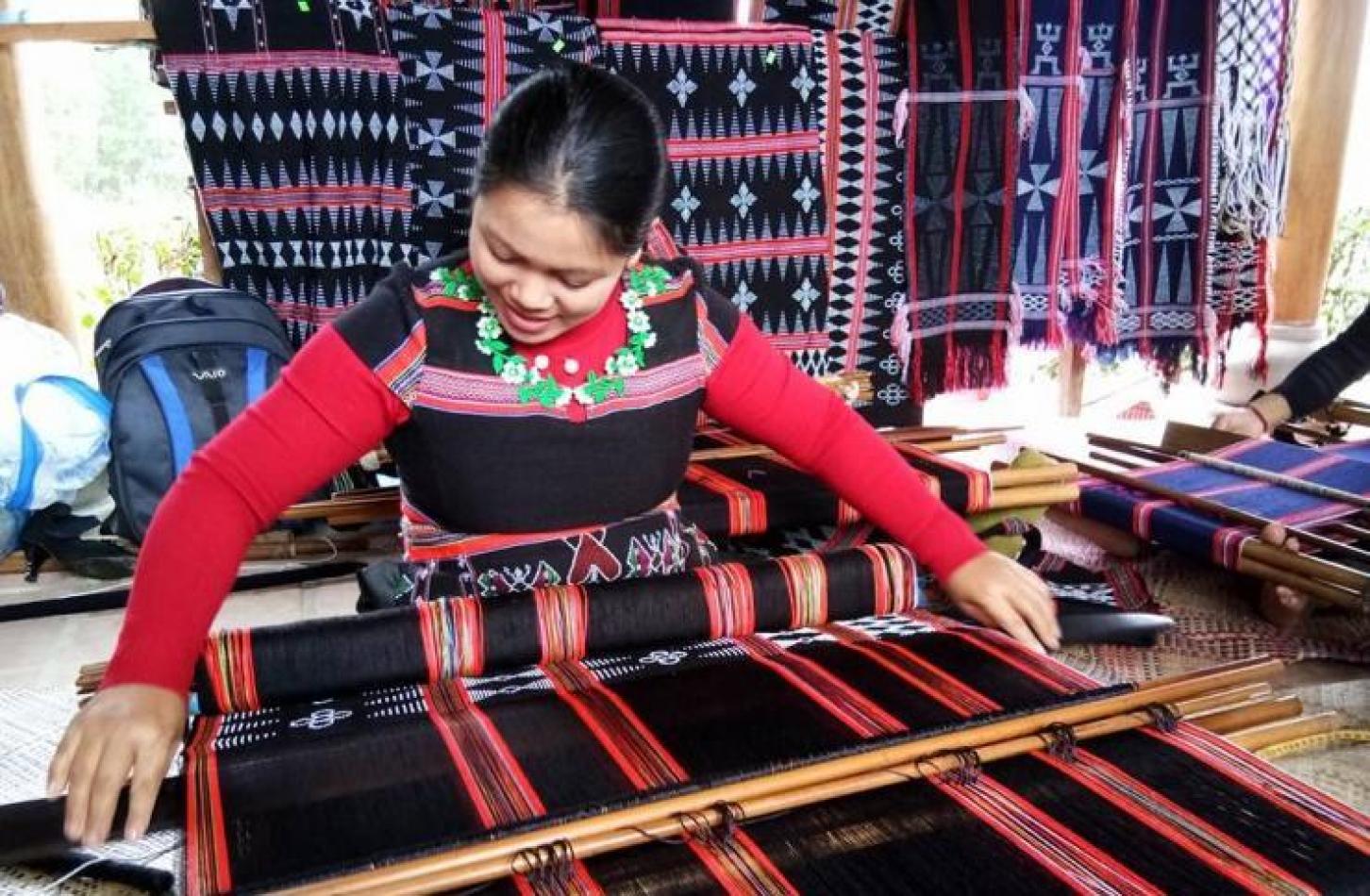 Saturday, May 16, 2020
The Ta Oi is an ethnic group living in A Luoi a rural district of  Thua Thien-Hue province in the North Central Coast region of Vietnam. The women of the Ta Oi have long been renowned for their skill at weaving “zeng” – a particular type of brocade. It is not only sophisticated but is also a measure of the different values in their culture and life, making it one of the country’s finest brocade weaving arts.

For centuries, when September arrives and the cotton “boll” blooms, it’s also been the time the Ta Oi people prepare their looms. The bolls are collected and threaded before being dyed. The basic colours of the ancient Ta Oi people are black, white, yellow, red, green and purple. Each dye is made naturally from different plants and leaves in the area.

In the process of creating the dye, additives such as stone snail shells, tapioca, or dried glutinous flour are added to make the fabric more durable.

Having dyed the fabric, the Ta Oi people then kick their loom into life. Weaving requires a high level of meticulousness and skill, so is only undertaken by women, who are felt to have the appropriate qualities for the task.

It usually takes a great deal of time to classify each fabric into different purposes for nice brocade cloth, or zeng. For example, it is essential to select thin, fine fabric for the sheets used to make clothes, while large and coarse fibres are used for carpets or blankets. Along with the fabric, beads are also used to create patterns within zeng, which makes Ta Oi brocade stand out from others.

The Ta Oi previously used beads from the seeds of a “rac” tree, which grows in large numbers where they live. Its seeds are like pepper – very hard and with a hole in the centre when dried – making it easy for stringing to decorate zeng. The most difficult step is the arrangement of the beads to make a pattern, which is done during the weaving process and requires a lot of skill and experience to perfect.

The patterning on zeng brocade represents the typical features of the Ta Oi people. In the past, the more beads a zeng piece had the more valuable it was. The rich patterning expresses the culture, life, and activities of the Ta Oi and also adds value to their brocade.

There are about 76 popular patterns on the products, according to local brocade researchers. They reflect the diverse local environment, depicting flowers, corn, bamboo, birds, bats, butterflies, spiders, and fish bones. These are all present in their daily life, providing them with food or hunted as dangerous creatures threatening their safety.

The patterns are therefore like visual lessons for their children about their environment and ecology. Another pattern is an image of people and objects present in daily life, such as working activities, houses on stilts, fences, stairs, cooking fires, spinning wheels for weaving, and shields, among others. There are also patterns depicting the universe and reflecting their beliefs, such as stars representing beauty, lozenge shapes for the relationship between a person and the community, and zigzag lines for eternal love.

The sophisticated work and cultural values of zeng make it one of the worthiest products of the Ta Oi. Zeng was expensive in the old days, because it takes a lot of time, hard work, and creativity by the woman who makes it.

All Ta Oi women become familiar with looms when they are little girls and are taught to weave zeng by their mothers. When they grow up, their zeng weaving skill express the beauty and best qualities of a girl and her mother. The young women must know how to make scarves, shirts, dresses, bags, and blankets for themselves and their families and these are sometimes exchanged for other goods.

According to Ta Oi tradition, a bride makes beautiful zeng items to give to her future husband’s family members as gifts. In olden times, zeng was commonly used in the Ta Oi people’s daily life and work and especially at important events and festivals. Such items were considered part of the individual. When someone passed away, his or her zeng items were buried with them. Only a few things like a belt or a scarf were kept by their family, to commemorate their lost loved one. They were put in a solemn place, like under the altar or where important items are stored, and brought out as worship offerings to the deceased.

There have been tough times for zeng, as many people moved towards other work to earn more money when demand for zeng fell as new fashion items. Thanks to the efforts of people with a deep passion for zeng to preserve the artwork with projects establishing weaving groups and training, however, zeng weaving has been restored in recent years as a highlight of ecological and community-based tourism in the area. Many people returned to the traditional job and produce new and creative patterns for modern life.

Zeng is now not only for local residents but is also popular among many tourists. It has been taken to craftwork festivals around the country and is part of traditional trade village preservation efforts, to introduce products to both local and foreign visitors.

It also attracts fashion designers, who feature it in their collections, especially as an exotic pattern in an áo dài, the traditional Vietnamese dress, which has impressed international fashion experts in China, Japan, South Korea, and France at fashion shows and fairs.
[(Le Diem/TGA) Comboni Missionaries]