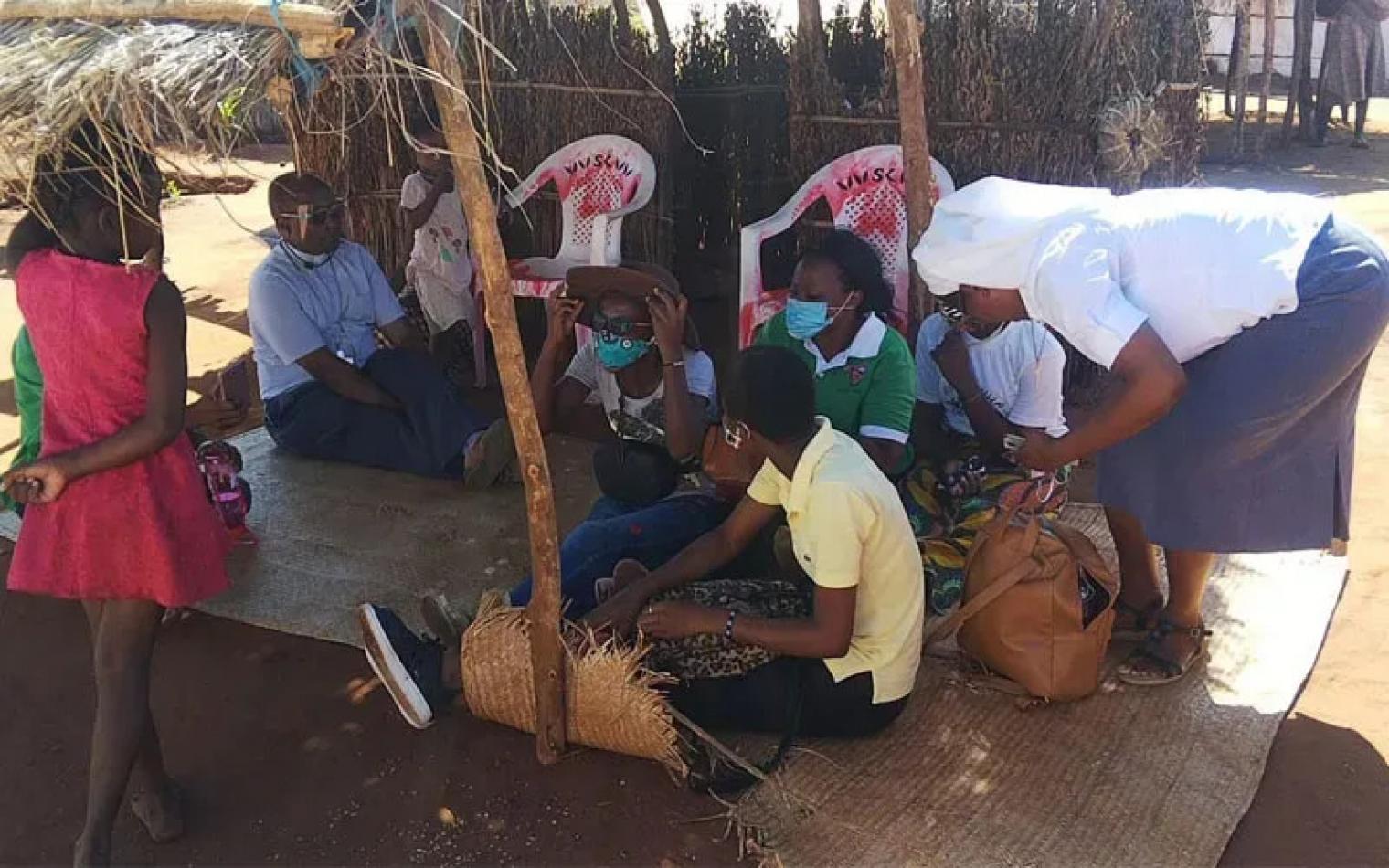 Tuesday, May 17, 2022
Catholic charity foundation, Denis Hurley Peace Institute (DHPI), is contesting the ultimatum given by authorities in Mocímboa da Praia in Mozambique’s embattled province of Cabo Delgado, requiring civil servants who had fled from violence in the town to return to work. [In the picture: A Catholic Priest and a Religious Sister having a moment with refugees in the Catholic Diocese of Pemba in Mozambique. Credit DHPI]

In a report sent to ACI Africa, officials of the peace entity of the Southern African Catholic Bishops’ Conference (SACBC) say that what has remained in the hands of militants for years is not yet safe for occupation by people who had been displaced. DHPI officials mention a May 5 alert that is said to have been given by the Municipal Council of Mocímboa da Praia, giving a period of 10 days for all employees to return to the town, which was recovered in August 2021 after having remained in the hands of violent extremists for almost a year.

“The Mayor Cheia Carlos Momba summoned all the employees of the municipality to present themselves, on 15th of May, in the village of Mueda, from where they should take transport to Mocímboa da Praia,” DHPI officials say. According to the SACBC peace entity, the statement ends with a warning, “The absence of the employee will merit administrative measures”.

“The communication by mayor Momba does not say what kind of ‘administrative measures’ will be taken against employees who, for some reason, do not come forward,” DHPI leadership says in the report authored by the foundation’s Director, Johan Viljoen. The report is co-authored by Reabetswe Tloubatla and Jeanette Lesisa from DHPI.

The DHPI officials further say that the current ultimatum is not the first time that authorities from districts affected by violence in northern Cabo Delgado order officials to present themselves to the respective authorities under penalty of being sanctioned. According to the DHPI officials, calls for employees are made in a context in which conditions do not yet exist for the return of populations to towns that had been occupied by the extremists.

The officials of DHPI say that in March, a delegation from the Council of Ministers declared that they had not yet created conditions for the return of displaced populations to their areas of origin. The Catholic entity recalls the decision of Mozambique’s Minister of Labor and Social Security, who said, in reference to populations affected by the violence, “There is trauma due to what they went through and we recognize the urgent need for infrastructure rehabilitation and allocation of means of work, especially circulating means, including ambulances.”

The Minister, Margarida Talapa, is also said to have referred to the existence of “failures in the consolidation of security in the areas affected” by extremism. DHPI, which is researching the evolution of conflicts in Mozambique and in a number of other African countries, says that violence remains present in Cabo Delgado. Highlighting a recent incident, officials of the SACBC entity say, “Last Friday, a group of more than 10 insurgents attacked the headquarters of the administrative post of Olumbe. This is the first attack recorded in the territory under the control of Rwandan forces since the takeover of the village of Mocímboa da Praia and the administrative posts of Mbau and Pundanhar.”

In a report that was shared with ACI Africa in January, DHPI refuted claims that military intervention in Cabo Delgado’s five-year insurgency had yielded gains. In the report, DHPI officials said that they had continued “to receive numerous reports of ongoing atrocities against civilians, in the areas supposedly stabilized by Rwandan and Mozambican forces.”
[Agnes Aineah – ACI Africa]