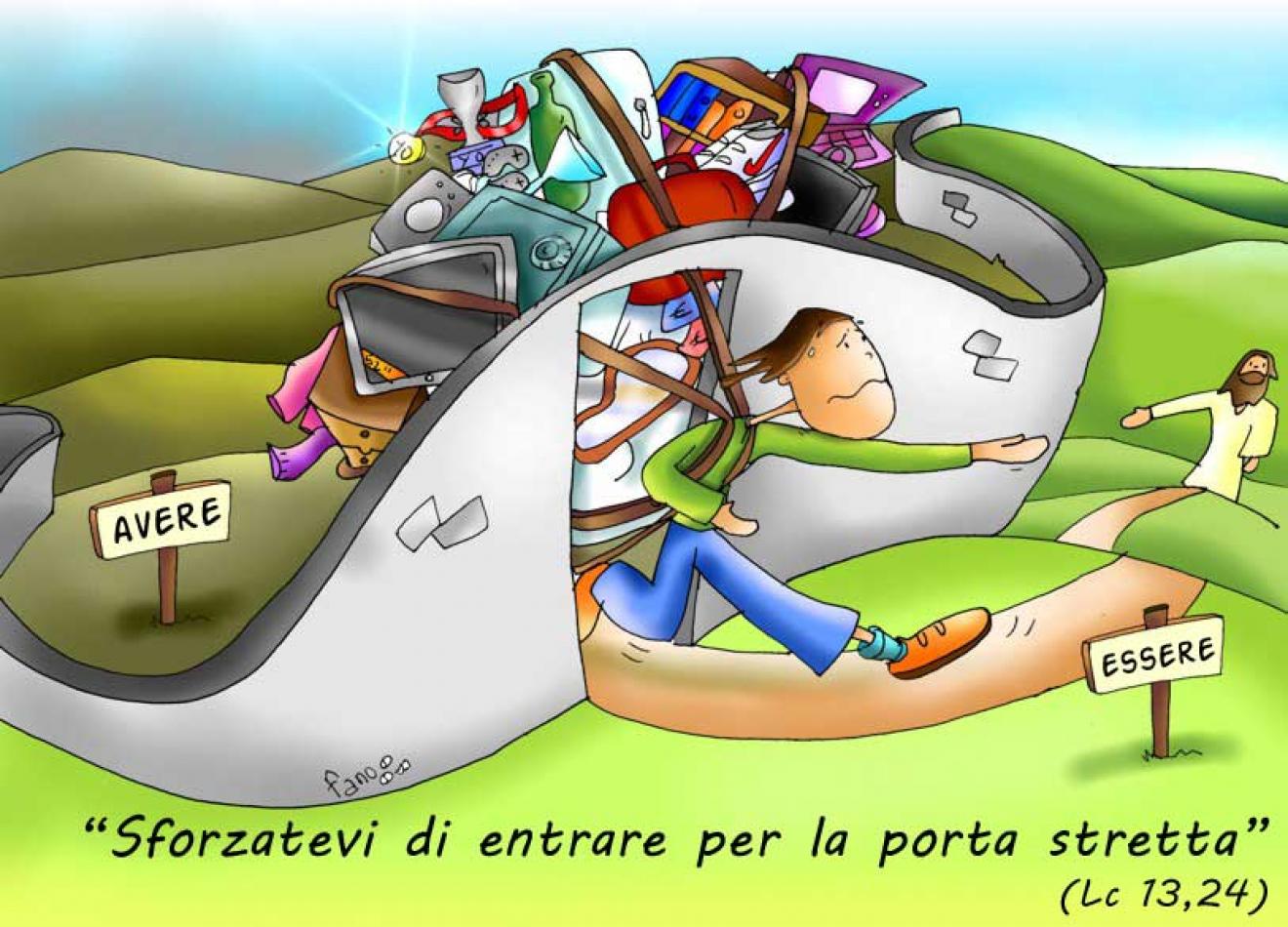 In Matthew’s Gospel, we find often on the lips of Jesus harsh words against the wicked: he speaks of hell fire, threatens to separate the sheep from the goats, and six times, he announces to sinners that weeping and gnashing of teeth await them. Luke presents a Jesus who is more understanding, forgiving and always ready to side with the poor, the desperate, who has had a hard life. [...]

All are welcomed, but don’t be late
Gospel reflection
Fernando Armellini 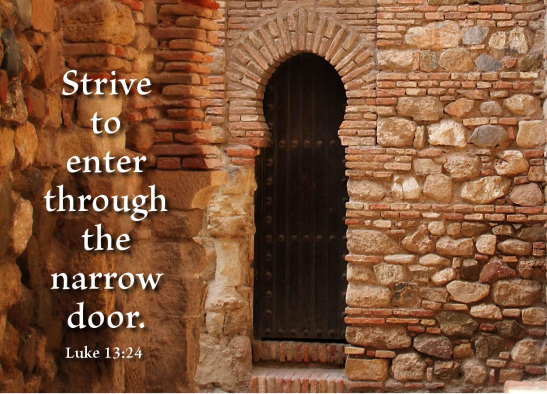 In Matthew’s Gospel, we find often on the lips of Jesus harsh words against the wicked: he speaks of hell fire, threatens to separate the sheep from the goats, and six times, he announces to sinners that weeping and gnashing of teeth await them.

Luke presents a Jesus who is more understanding, forgiving and always ready to side with the poor, the desperate, who has had a hard life. He always presents him so … except in today’s passage where, strangely, threats and condemnations appear. There is a narrow gate through which it is almost impossible to pass: it is even closed and who is in is in, who’s out is out. Latecomers are badly rejected: it’s too late!—cries the owner—get out of here! Away from me! I do not know you! There will be weeping and gnashing of teeth!

(…)  It is not hard to guess what drove Luke to include in the Gospel these harsh words. In his communities, laxity, fatigue, the presumption of being right with God, arrogance, the belief that good intentions are sufficient and that salvation can be obtained cheaply have infiltrated.

Luke realizes that the risk of being excluded from the Kingdom looms on many Christians and he feels compelled to refute the false optimism that has spread. He uses images related to culture, environment, and age. We must keep this in mind or else we can misunderstand the meaning and consider them information about what will happen at the end of the world. The details are dramatic, the language is impressive, but the preachers of that time expressed themselves that way when they wanted to shake their listeners.

Let us grasp the real meaning of what is said. One day someone asks Jesus: “Is it true that a few people will be saved?” (v. 23). Some rabbis taught that all the people of Israel would take part in the banquet of the Kingdom. But others said: No, those who are lost are more numerous compared to those who are saved like a river is more than a drop of water. The prevailing opinion was: “This century the Most High has created a multitude, but the future for a small number. Many are created, but few will be saved.”

Jesus takes no position on the subject: the question is badly posed and in this case whatever answer is incorrect and misleading. If he answers yes, he creates a false security, if he answers no he causes discouragement. So he refuses to be the apocalyptic visionary. He did not come to reveal secret numbers and dates, as some dreamers of today rave. He prefers to change the subject. He does not enter into speculation about the end of the world and the eternal salvation. He insists to make clear how one enters the Kingdom of God, that is, how one becomes and maintains himself today to be his disciple.

The first condition is: “Do you best to enter by the narrow door, for many, I tell you, will try to enter and will not be able” (v. 24).

That someone is not able to enter amazes. Clearly, he does not lack good will, but he misses the way. The reference is to the Pharisee who leads an impeccable and exemplary life, fasts twice a week, not a thief or adulterer, yet he does not enter.

To pass through a narrow door—we know—there is only one way: writhe, twitch, in short … make oneself small. Who is great and fat does not pass; he can try in every way, for straight or sideways, he will not make it! Here’s what he wants to make it clear on Jesus: one cannot be a disciple unless he gives up to be great if he does not make himself small and servant of all.

Here it is the fault of the Pharisee: the presumption, the trust placed in their sanctity, in their good works. He spares no energy, does everything to please God—Paul also recognizes it (Rom 10:3)—but he’s too big.

Little is one who knows of not meriting anything who, looking at himself, feels fragile and lost, who cannot but appeal to the mercy of God, only he can pass.

Who does not take the inner disposition of the small, whatever religious practice he performs—prayers, catechesis, preaching, devotions, even miracles (Mt 7:22) —does not enter into the Kingdom of God.

Jesus continues his speech, develops his call to struggle to take part in the banquet through a parable that introduces another requirement: one must hurry, there is no time to lose (vv. 25-30).

A man offers a free banquet to which anyone can take part, it is enough—as we have seen—to be sufficiently small and not to show up with claims. But be careful: at some point, the door is blocked.

The scene now splits. We have the first group of people who remained outside, claim to enter shouting their reasons. They say: “We ate and drank with you, and you taught in our streets” (v. 26). But the host does not open and drives them calling them: “workers of evil” (v. 27).

Who are they? Let’s identify them: they knew Jesus well; they have listened to him, ate the bread with him. Consequently, they are not the pagans; they are members of the Christian community. They are those who have their names written in the records of baptisms, read the Gospel and participated in the Eucharistic banquet. They believe they have what it takes to get into the party, instead, they are being turned away because their knowledge of the Gospel message is not enough; it is necessary to adhere to it. Whoever does not make this choice on time is a worker of evil.

The severe sentence is given to lukewarm Christians who are contented with belonging externally to the community, celebrate empty liturgies which are reduced to external rites that do not transform life.

This condemnation is not intended as a conclusive rejection, not an exclusion from eternal salvation. Such an interpretation is shallow and dangerous because it contradicts the Gospel message.

The words of Jesus are for the present, belonging here and now to the Kingdom of God. They are a pressing invitation to urgently reconsider one’s spiritual life because many cultivate illusions of being disciples, but in reality, they are not at all. These people, if they are not immediately aware, will end in tears (when they realize that they have failed) and gnashing of teeth (a sign of anger of those who understand, too late, of having done wrong).

We come now to the second group, made up of those inside. Seated at the table are the patriarchs Abraham, Isaac, Jacob, and all the prophets, finally, a great multitude, “coming from east and west, from north and south” (v.29). It does not say that all these people knew Jesus and walked beside him. Perhaps many do not even know he existed. What is certain is that, if they are able to enter, it means that they have passed through the narrow gate; the others are left outside (vv. 28-30).

Let’s go back a few pages. Chapter 9 of Luke’s Gospel says that one day, among the disciples, a discussion arose to know who was the greatest. Then “Jesus took a child and stood him by his side and said, ’The least among you all, is the one who is the greatest!”’ (Lk 9:46-48). Who does not strive to become small cannot take part in the banquet of the Kingdom.

Jesus did not want to scare with the threat of hell. His condemnation is directed against tepid, inconsistent, hypocritical life led today by many who consider themselves his disciples. Yet even in the face of his disturbing words, there are Christians who do not allow themselves to be touched by doubt that one day he will tell them: “I know you not.”

Luke—maybe a little reluctant, because it is not in his style—has introduced this text in his Gospel. Unlike Matthew who concludes in a gloomy and threatening way, “the heirs of the kingdom will be thrown out into extreme darkness; there they will wail and grind their teeth” (Mt 8:12), Luke closes the parable with the festive scene, the banquet and a significant saying: “Some who are among the last, will be first, and some who are among the first, will be last” (v. 30).

In the end, therefore, all will be welcomed, although—unfortunately for them—the last will have lost the opportunity to enjoy from the beginning the joys of the feast of the Kingdom of God.