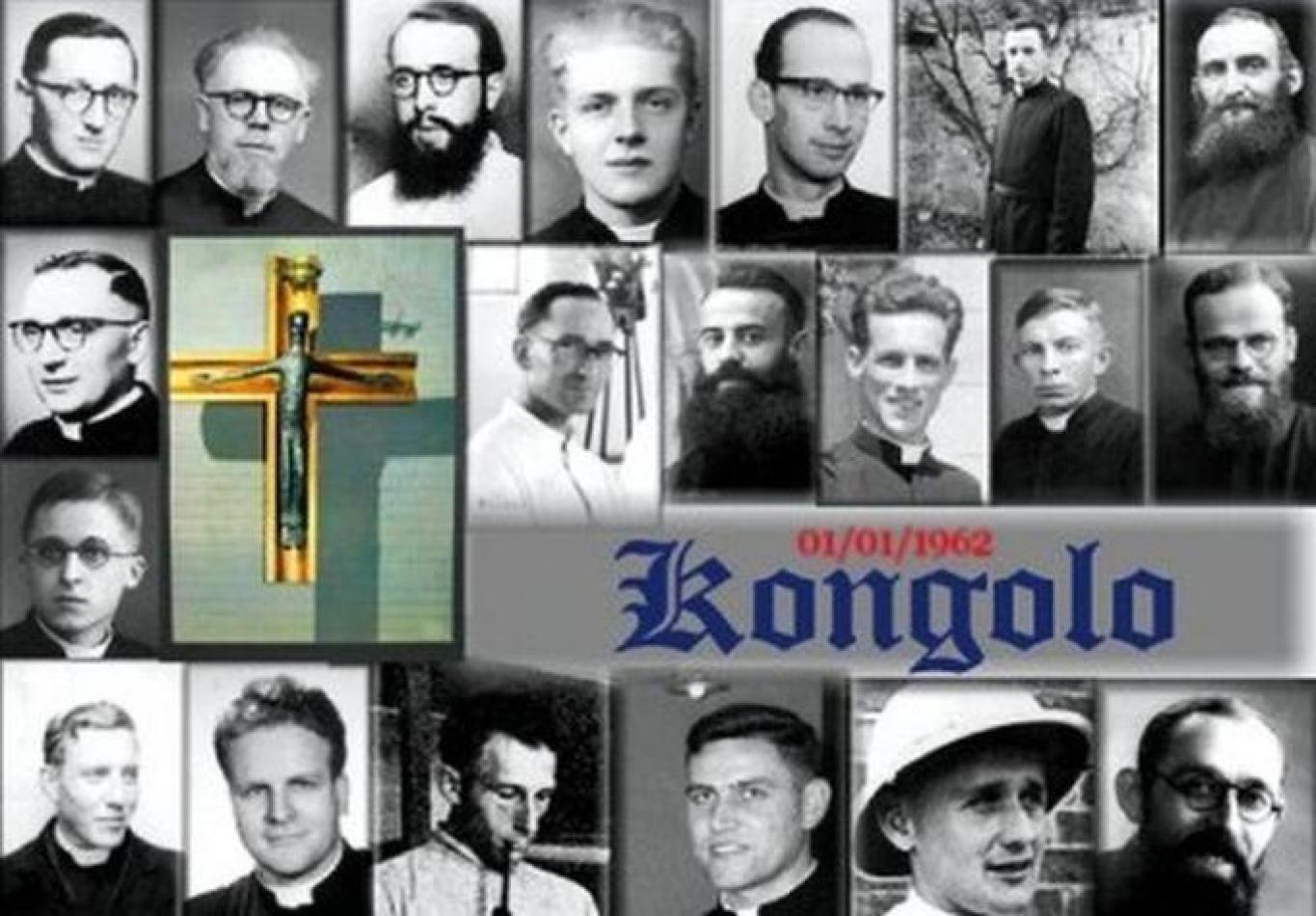 Thursday, September 5, 2019
Fifty-seven years after their tragic deaths, the Roman Catholic Church of Congo has started the process of beatification of the twenty missionaries assassinated by government soldiers on the 1 January 1962.

Last June, the bishop of Kongolo diocesis, in the Tanganyika province, Mgr Oscar Ngoy wa Mpanga announced that he had initiated the process of beatification of the twenty missionaries (19 Belgians and one Dutch) who were assassinated on the 1st January 1962 in this city, during his visit to the memorial erected by their congregation at Gentinnes, in Belgium. Such large-scale beatification would be a major event both in Belgium and Congo, which is the largest roman catholic country in Africa which already has two blessed heroes: Sister Marie-Clémentine Anuarite Nengapeta, who was murdered by a Simba rebel in 1964 because she refused to renounce her faith and Isidore Bakaja who was flogged to death in 1909 by the Belgian director of a rubber company who opposed the evangelisation of its African staff. Both were blessed by Pope John Paul II in 1985 and 1994 respectively.

The present process concerns the beatification of twenty missionaries who were tortured and killed by soldiers of the Congolese government’s National Congolese Army (ANC) during the Katanga secession war (1960-1963). There were all members of the Congregation of the Holy Spirit.

Their situation became delicate in November 1961 after the secessionist army of the so-called Katanguese gendarmes withdrew to Kongolo and were besieged by the ANC. At some point, some Katanguese troops sought refuge in the catholic mission and left the fathers with no choice but accept this fait accompli. At the same time, civilians from the Luba, Songe, Bayashi, Bangubangu and Wagenia tribes from other parts of the country, who were running away from governmental troops, also sought asylum in the mission premises because they were unable to seek refuge in the neighbouring villages of the Hemba tribe. For the missionaries and the Congolese seminarians and nuns who were with them, there was no question of abandoning these 200 civilian refugees, mostly elders, women and children who had requested their protection.

On the 29 and 30 December 1961, the ANC launched mortar attacks against Kongolo. When they entered into the town, they were showing hostility towards the missionaries, explained the only priest who survived the massacre, Father Jules Darmont, in a report written in February 1962. Such hostility could be explained by the fact that the Katanguese government had asked several months ago, the local bishop, Mgr Gustave Bouve to appoint a military chaplain. Coincidentally, the bishop appointed one of Father Darmont’s colleagues, then Father Darmont himself, after his predecessor was shot dead when he was healing a wounded Katanguese soldier, during a clash with the UN troops.

Immediately, the priests were dealt with as suspects of collaboration with the enemy by the Congolese national army. Some of them were tortured and the mission was looted on the 31 December 1961.

Then they were all jailed. The nuns were forced to attend the maiming of a living man and threatened to suffer similar outrage if they refused to testify the fathers and accuse them of complicity with the Katanguese gendarmes.

Finally, on the 1 January 1962, the priests were interrogated and flogged with a heavy hippo leather whip by drunk military who hit them also with rifle buts. Afterwards, they opened fire and killed 19 priests. Only Darmont survived thanks to a soldier who helped him to escape the massacre. That wasn’t the end of the outrage though. Young members of the pro-Congolese government Balubakat militias began to maim the dead bodies of the martyrs. Some cribbled the corpses with arrows while others stabbed them with knives and assegais. Then, the Congolese seminarians were forced to undress the corpses and throw them into the Lualaba river. A few moments later, Father Darmont heard some of the murderers say: “ We killed the Fathers and the doctor. Yet, we have wounded and sick men among us. We are “ wapumbafu (stupid)! ”

These martyrs performed their duty until death, showing solidarity with those who could not run away. Immediately after their death, their congregation tried to initiate the procedure for their beatification. But since the motive of their death could not be established with clarity at the beginning, it was not possible under canon law to trigger the procedure, says Father Joseph Burgraff, the director of the Spiritan Missionaries House in Gentinnes to the “Gazet van Antwerpen” daily. It was not indeed obvious whether they had been killed for their faith or not, though it was well known that there were strong anticlerical feelings on the Soviet-backed government side.

Recently, Pope Francis contributed to remove the obstacle when he decided in 2017 to introduce changes to the beatification procedures. Henceforth, hatred against the Christian faith as a motive for assassination is no longer a prerequisite. Christians who remained faithful to their commitment to serve the people, while knowing this attitude could pose a threat for their life, can also be blessed

The names of the Kongolo martyrs appear on the walls of the Gentinnes chapel, built in 1967, among those of 225 missionaries who were assassinated in Congo during that period, men and women from various congregations. The list includes four Comboni fathers killed in Niangara, Dominican fathers and nuns, priests of the Holy Heart of Mary, White Fathers, Franciscans etc…) but also protestant missionaries. About half (115) are Belgian nationals. The other are Dutch (38), Congolese (10), Italian (10), American (9), Luxembourgian (8), Spanish (5), French (4), Canadian (3), German (1), Australian (1) and New Zealander (1). On the 25 January 1962, a national funeral was celebrated at St Michael Cathedral in Brussels.

The fruits of the Kongolo martyrs’s sacrifice can be seen today in their dioceses, 57 years later. The young local church has become in turn a missionary church. The Spiritan Foundation which was created in 1986, has now 30 missionaries in activity and over 40 seminarians. The Kongolo diocese boasts now from a solid local African clergy, priests, nuns and committed laypersons. The prophecy of one of the 20 martyrs, Father Jean-Marie Godefroid has been accomplished. In March 1961, a few months before the tragedy, he wrote: “The Church will be really Congolese when the majority of the important jobs will be in the hands of African bishops and priests”.
[François Misser - Comboni Missionaries]