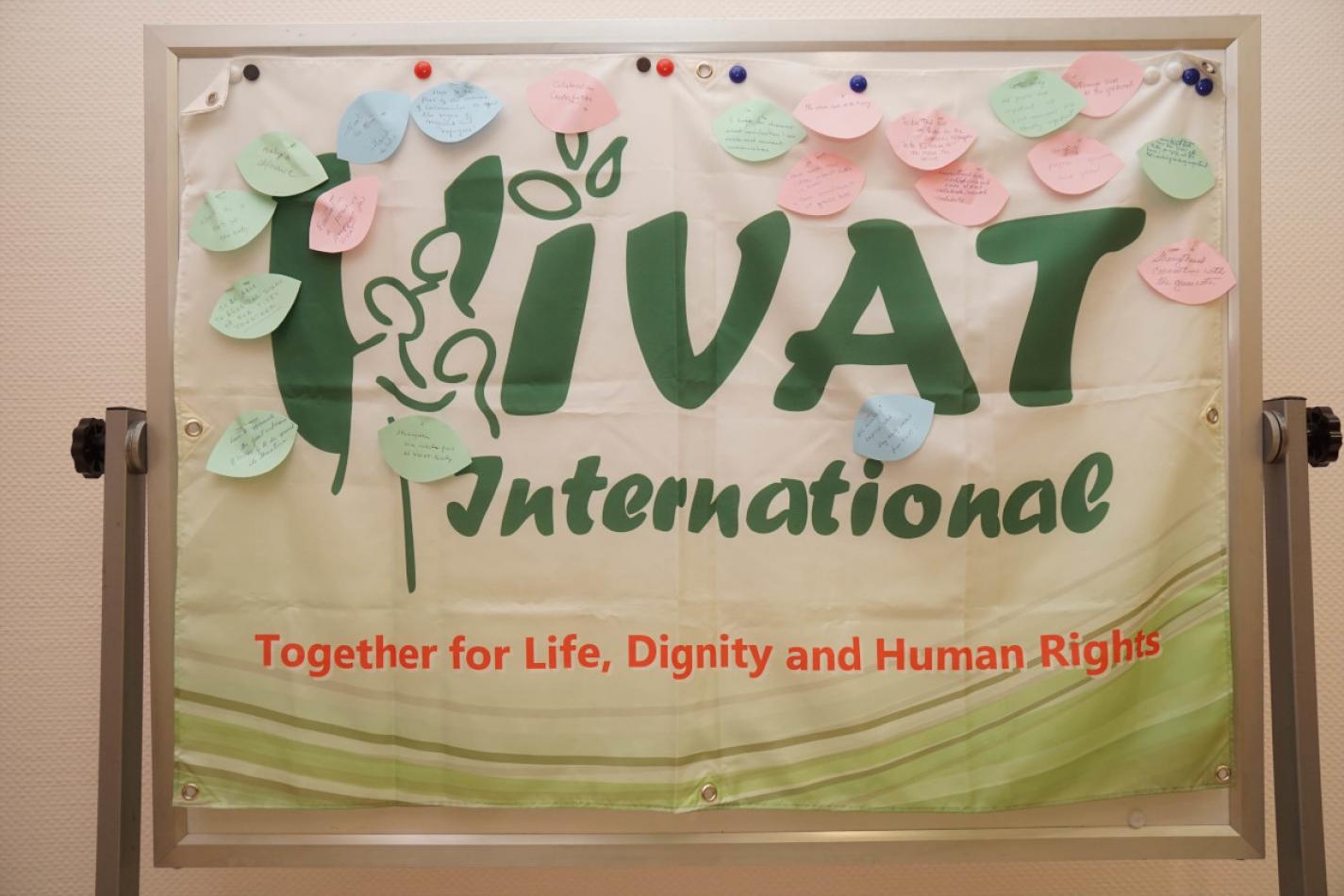 Friday, January 24, 2020
VIVAT International is about to celebrate its 20 years of service to Justice, Peace and Integrity of Creation. Here we publish the “announcement letter of the foundation of VIVAT International” on November 18, 2000. “I believe this is a good resource to reflect on our commitment on VIVAT mission on the occasion of the 20th anniversary”, says Fr. Daisuke Narui SVD, the present Executive Secretary.

Dear Sisters/Confreres,
This letter is to announce the formation of a joint SVD/SSpS venture, namely the establishment of an NGO (non-governmental organization) that will work towards acquiring NGO status at the United Nations. We anticipate that this will give us the opportunity to witness at what Pope John Paul II has called “the new Areopagus”. As an NGO, we will have access to UN information resources and receive regular briefings, have the right to attend meetings and conferences, have the opportunity to participate in the formulation of policy and the development of UN documents (many of which will go to form international law). We will also be in a position to bring matters of concern before UN agencies.

We are not pioneers in this. The Franciscans, Dominicans, Religious of the Good Shepherd, Mercy Sisters, Maryknoll and others have already established NGO status at the United Nations and are very affirmative of the experience and of the value of Religious congregations getting involved in this kind of activity.

This proposal was brought forward in both our congregations about six years ago, and after a time of exploration and research (conducted by Sr. Judith Vallimont and Br. Bernie Spitzley), a decision was made to send one member from each of our congregations for an internship with an already established NGO. The SSpS sisters sent Sister Maria Carmen Castro to Global Education Associates, and the SVD sent Lawrence Correa to Franciscans International. These submitted a joint report last May. The congregational leadership of the SSpS Sisters got the full support to go ahead with the NGO by the third general assembly of provincials/regionals in Pune (India) in August-September 1999. The SVD waited for their general chapter where the generalate made the proposal and the chapter responded by calling on the new general council to establish this NGO.

Today, at a special joint meeting of the SSpS congregational leadership team and the SVD General Council, the NGO was formally established with the title VIVAT International. “Vivat” is taken from the prayer “Vivat Deus unus et trinus ...” which is common to both congregations. “Vivat” means “let live.” It can be “let the people live,” “let peace live,” “let justice live,” as well as “may God live among us and in our hearts.”

We believe that the humanitarian goals of the United Nations are very consistent with our own goals and that collaboration with the United Nations can be an important way of working for the kingdom. It can also bring us into contact and allow us to collaborate with a large number of NGOs working for similar goals. At the same time, because of our faith commitment and the experience and expertise of so many of our members in so many different situations in the world, we believe we do have something to offer. We have long term presence with the poor and the marginalized in many parts of the world, a high level of education, and an effective international network. Therefore we have the resources to bring the voice of the poor and marginalized to the decision making levels of world bodies. To achieve this is the goal of VIVAT International.

One of the tasks of VIVAT International will be to disseminate information from the UN and to raise awareness of UN issues among our congregations. Another goal will be to gather information about on-the-ground realities from the members of our two congregations around the world, and to draw on the expertise of members in reflecting on the standpoint which VIVAT International should take on various issues. It is important that VIVAT International does not become the activity of just a few of our members in New York but is truly rooted in the faith, life and work experience of our members.

We have encouraged Maria Carmen and Lawrence, our team in New York, to develop a network of sisters and confreres around our congregations with whom they can consult in developing their positions, and whom they can invite to comment on UN draft documents and UN policy making. Therefore, we ask all confreres and sisters to be open to collaboration with the team in New York, to bring issues up to them when you think it appropriate, and to respond to their requests for comments, etc., when these come. We ask too that each province and each of our communications activities seek ways to help promote awareness of UN issues in collaboration with VIVAT International.

In terms of organizational structure, VIVAT International is made up of a board of directors, a team of officers, and a general membership. All SSpS sisters and all SVD confreres are automatically members of VIVAT International. Any organizations or activities within these two congregations can also have group membership. The team of officers is the executive and is based in New York. The board of directors is made up of one general councillor from each congregation, the generalate JPIC coordinator from each congregation, and one superior general. The superior general will be the president and the term of office will be for two years. The two superiors general will alternate in this position. One of the officers (i.e. the executive team in New York) will be the chairperson of the team, and this term will also be for two years. This position will alternate in the opposite sequence to the president. In other words, when the president is the SVD superior general, then the chairperson of the officers will be an SSpS and vice versa.

For the next two years, the president will be Fr. Tony Pernia and the officers will be Sister Maria Carmen Castro, SSpS (Chairperson) and Lawrence Correa, SVD (Co-Chairperson).

We close by asking for your prayers and your cooperation in this new and important venture.