3rd Sunday of Lent – Year A 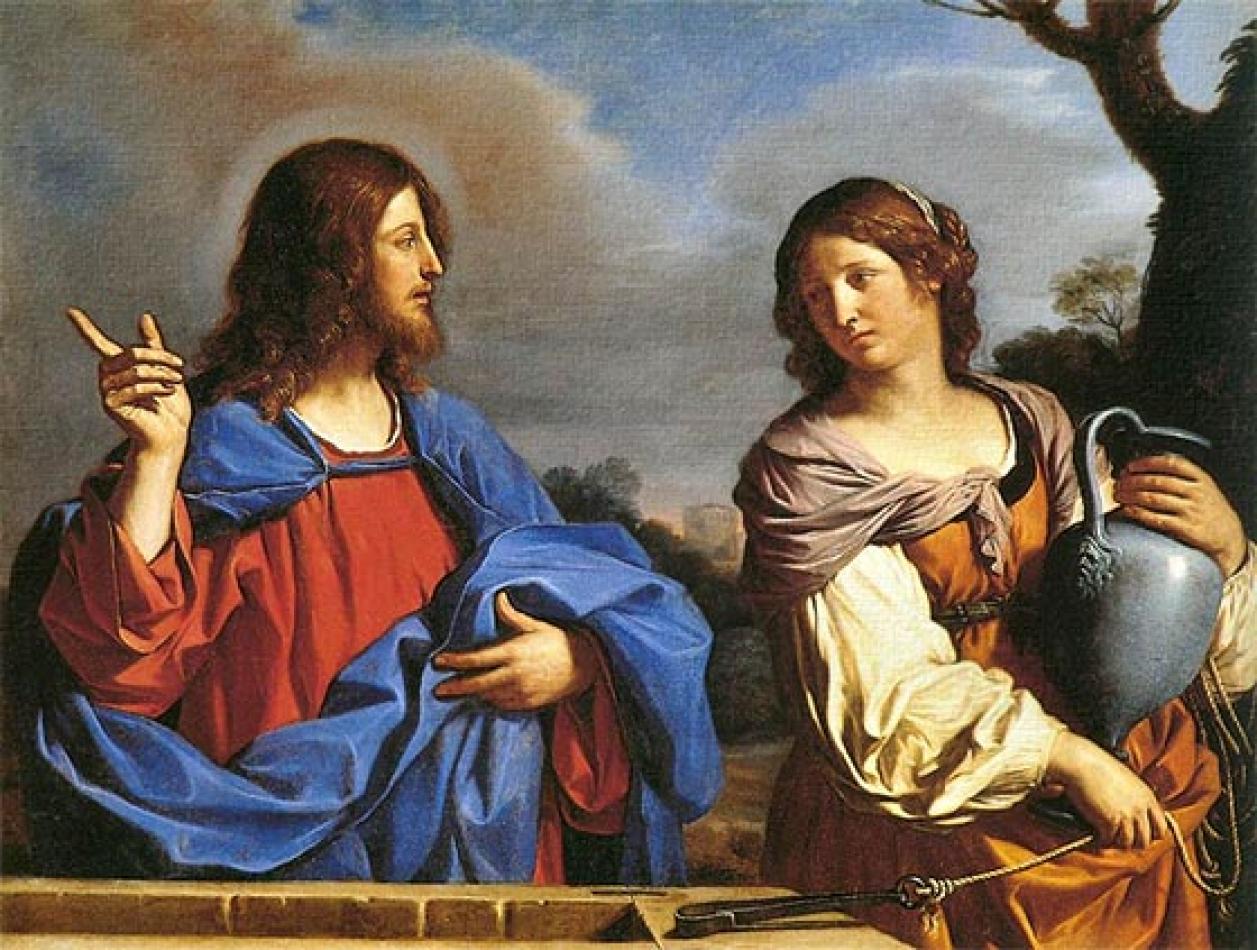 John never refers to the facts of Jesus’ life in their pure materiality. He rereads them and uses them to compose dense pages of theology: it’s never easy to establish what really happened. The case of the Samaritan is an example. The symbolism that accompanies the whole story seems so obvious, that someone has even cast doubt on the historicity of the event and thought that this is a literary composition of the evangelist. (...) 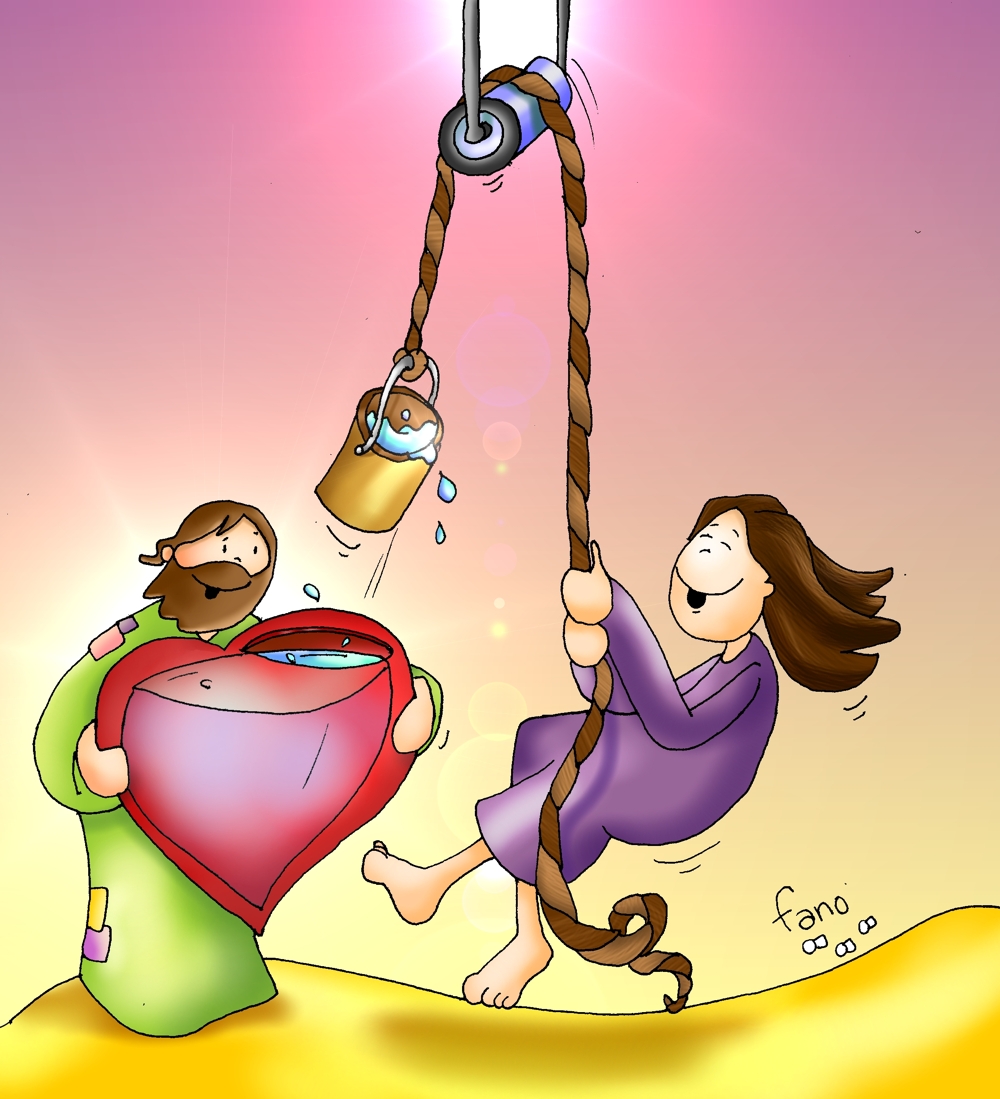 John never refers to the facts of Jesus’ life in their pure materiality. He rereads them and uses them to compose dense pages of theology: it’s never easy to establish what really happened. The case of the Samaritan is an example. The symbolism that accompanies the whole story seems so obvious, that someone has even cast doubt on the historicity of the event and thought that this is a literary composition of the evangelist. We believe that there was a meeting of Jesus with a Samaritan woman, but the fact was then redacted with the language, images, and biblical references with which he wanted to convey a theological message.

In our review, we keep in mind two levels—the historic and the theological—focusing our attention on the second.

In ancient times, the well was the place where people came together. At the well, the shepherds met to water their flocks. The traders stopped there with their wares waiting for customers. The women came to the well to draw water (and maybe even have a chat …). Lovers go to the well to seek a companion.

The Bible tells many of these meetings at the well (I suggest you read the following: Gen 24:10-25; 26:15-25; 29:1-14; Ex 2:15-21). The one read in today’s Gospel has Jesus and a Samaritan woman as protagonists. The well mentioned still exists. It is located along the road that leads from Judea to Galilee. It is more than three thousand years, is very deep (32 m) and still gives good and fresh water, as in the time of Jesus. It was the place where all the travelers were stopping, resting, and regaining strength.

Even Jesus, tired from his journey, sits on the well. It is noon when a woman comes to draw water, and Jesus asks her for a drink.

The surprise of the woman is understandable: from the accent one immediately realizes that it has something to do with a Galilean unpopular with her people. How dare he ask for a drink from her, a Samaritan woman? Why does he violate the strict rule that forbids him to speak alone with unknown women? The rabbis taught that even asking for an information, the words had to be minimized. The celebrated episode that happened to Rabbi Jose, the Galilean, at a crossroad, who asked a woman: “Which road leads to Luz?” Recognizing him, she replied: “You talked too much with a woman. You only have to say ‘Luz.’”

Since this is the mentality, it also explains the wonder of the disciples. Upon returning from the village where they went to buy food, they find Jesus with the Samaritan woman. The free attitude of the Master offers food for thought, although marginal in relation to the theme of the passage. Jesus demands from the disciple’s purity of heart and intention. He is even stricter on this point: “Anyone who looks at a woman with lustful intent has already committed adultery with her in his heart” (Mt 5:28) but behaves freely and rejects all forms of discrimination.

After this introduction, we come to the central part of the passage, i.e. the dialogue between Jesus and the Samaritan woman (vv. 7-26).

It is important to understand who this woman is. The way in which the evangelist presents her clearly reveals his intention to transform her into a symbol.

Let us try to identify her: she has no name and nothing is said about where she comes from. The only element that defines her is that she is a “Samaritan,” which is equivalent to a heretic, one unfaithful to God. Who can it be?

She comes to the well and the well in the Bible—as we have noted—is often the meeting place between lovers who then end up getting married. There is something curious here. To leave Jesus and the woman alone, the evangelist, in a rather clumsy and unlikely way, sends the disciples away with the excuse of “going into town to buy some food” (v. 8).

Whom do two “lovers” at the well represent?

The Old Testament often speaks of the people of Israel as the bride to whom the Lord is tied with an unfailing affection (keep in mind that Israel, in Hebrew, is feminine). This marriage did not have a happy outcome. The falling in love started in the desert where God and Israel had lived unforgettable experiences. At these moments, the Lord looked back nostalgically: “I remember your kindness as a youth, the love of your bridal days when you followed me in the wilderness” (Jer 2:2). Then the infidelities of the bride began, her betrayals, her infatuation for lovers, the regret for the gods of Egypt, the worship of Baal of the Canaanites, the flirts with the gods of the Assyrians, Babylonians, Persians and finally, even the Romans, causing the jealousy of her husband.

What will be the reaction of the Lord? Will it be repudiation, divorce, or punishment?

It is not even talked about: “Who could abandon his first beloved? Says your God…For a brief moment I have abandoned you, but with great tenderness, I will gather my people” (Is 54:6-7). The Lord will choose another solution. At the cost of humbling himself in front of the unfaithful spouse, he will retake to correct her because his only goal is to reclaim her. “So I am going to allure her, speak to her tenderly. She will answer me as in her youth, as when she came out of the land of Egypt” (Hos 2:16-17).

At this point, the identification of the Samaritan woman is taken for granted: it is the bride Israel, backed by her whole story of love and adulteries. She had many “husbands” and what she has now is not her husband. At the well, Jesus meets her and wants to bring her back to the one true love, the Lord.

In light of this spousal imagery, even the seemingly marginal details of the story are meaningful. First of all, the strange remark: Jesus had to pass through Samaria: from the geographical point of view he was not obliged to pass. He was in Jordan (Jn 3:22) and it would have been much simpler for him to go back down the river. The “had to” cannot but refer to that irresistible urge of the groom—God—who cannot help but meet his beloved.

He was tired from the trip. It is the only time in the Gospel that Jesus’ fatigue is mentioned. It is not surely to brief us of his physical stamina. The detail is introduced to address the long journey, the infinite distance that the Lord has had to travel to find the bride who had abandoned him: from the heights of heaven, he came to earth, driven by an overwhelming, infinite passion. He went down even to the deepest abyss in search of his beloved. No distance, difficulty, nor effort has discouraged him. One immediately thinks of the hymn of the Letter to the Philippians: “Though he was in the form of God … he emptied himself, taking on the nature of a servant … made in human likeness … humbled himself till death on a cross” (Phil 2:6-8).

We are introduced to the central theme of the dialogue between Jesus and the Samaritan woman.

The disciples went in search of material food. The woman came to draw water from the well. Jesus instead provides to all a food and a water that they do not know (vv. 10,32).

The thirst of the Samaritan woman is the symbol of the most intimate needs that torment the heart of the bride-Israel: the need for peace, love, serenity, hope, happiness, sincerity, consistency, and of God. These are the needs that every human being experiences.

The water of the well indicates the attempts and tricks that humans put in place to quench a thirst that no material “thing” can satisfy.

The living water that Jesus promises is of another type. It is the spirit of God. It is a love that fills the heart. Those who let themselves be guided by this spirit gets peace and do not need anything else.

The Samaritan woman, at the beginning of the dialogue, thought of material water. She did not even suspect that another type of water could exist. Gradually she began to perceive and accept the proposal of Jesus. Her progressive discovery is carefully underlined by the evangelist. At first, for her, Jesus is a simple wandering Jew (v. 9), then he becomes a master (v. 11), then a prophet (v. 19), and afterward the Messiah (vv. 25-26), finally, with all the people, she proclaims him the Savior of the world (v. 42).

Through the spiritual journey of the woman of Samaria, John wants the Christians of his community to perceive the proposed route to every disciple. Before meeting Christ, a person is solely concerned with the material aspects of life. They are important realities, even essential, but not enough. They cannot constitute the sole purpose and goal of life. Only a person who meets Christ, who discovers that he is the “Savior of the world” and welcomes the gift of his water, feels that each and every hunger and thirst can be satiated.

The last part of the Gospel (vv. 28-41) presents the conclusion of the spiritual journey of the Samaritan woman and of every disciple. What does this woman do after meeting Christ? She leaves the pitcher (she has no more use of it because now she found another water) and runs to announce her discovery and happiness to others.

It is the call to become missionaries, apostles, catechists to tell everyone the joy and peace experienced by one who meets the Lord and drinks his water.