Home
Mission Secretariat
Watykan
Pope Francis: “it would be good for us to stop living in conflict and feel once more that we are journeying together”

Pope Francis: “it would be good for us to stop living in conflict and feel once more that we are journeying together” 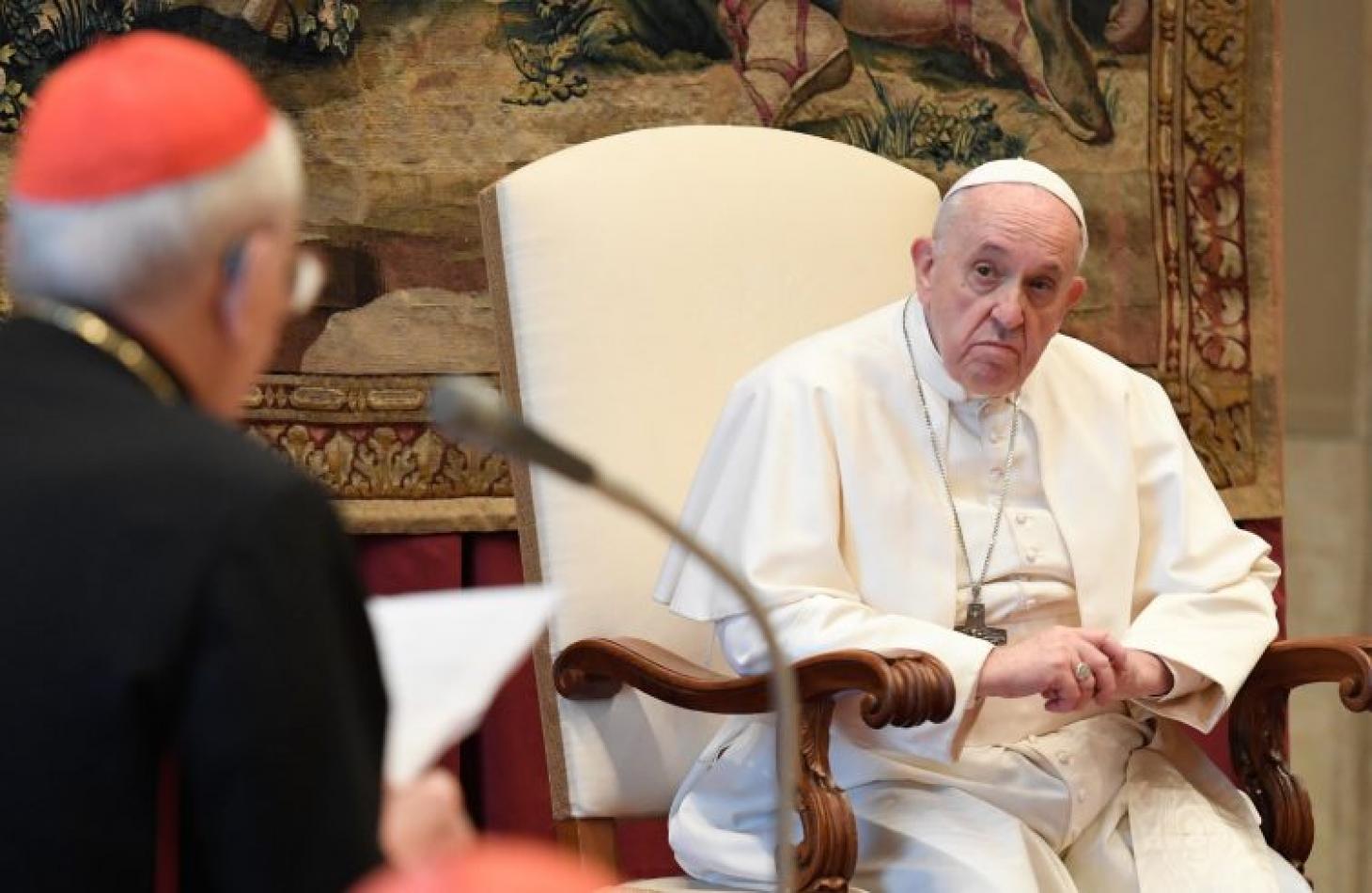 Tuesday, December 22, 2020
The Pope ended his traditional Christmas Greetings to the Roman Curia with an invitation to stop "living in conflict" and feel "once more that we are journeying together.” Indeed, the Church must not be viewed “in terms of conflict – right versus left, progressive versus traditionalist.” Nor must the Church be judged “hastily on the basis of the crises caused by scandals past and present." " Those who fail to view a crisis in the light of the Gospel simply perform an autopsy on a cadaver." The reform of the Church is not like “putting a patch on an old garment".

“It would be good for us to stop living in conflict and feel once more that we are journeying together, open to crisis”, these were the concluding remarks of the address for the traditional Christmas Greetings to the Roman Curia, in which Francis, for this Christmas celebrated at a time of pandemic, invited to not confuse crisis with conflict: “Conflict always tries to find ‘guilty’ parties to scorn and stigmatize, and ‘righteous’ parties to defend, as a means of inducing an (often magical) sense that certain situations have nothing to do with us.”

“When the Church is viewed in terms of conflict – right versus left, progressive versus traditionalist – she becomes fragmented and polarized, distorting and betraying her true nature”, the Pope said: the Church “is a body in continual crisis, precisely because she is alive. She must never become a body in conflict, with winners and losers. For in this way she would spread apprehension, become more rigid and less synodal, and impose a uniformity far removed from the richness and plurality that the Spirit has bestowed on his Church.”

“The newness born of crisis and willed by the Spirit is never a newness opposed to the old”, Francis remarked: “our unwillingness to enter into crisis and to let ourselves be led by the Spirit at times of trial condemns us to remaining forlorn and fruitless, or even in conflict.” “If a certain realism leads us to see our recent history only as a series of mishaps, scandals and failings, sins and contradictions, short-circuits and setbacks in our witness, we should not fear. Nor should we deny everything in ourselves and in our communities that is evidently tainted by death and calls for conversion”, the Pope said, guarding against “judging the Church hastily on the basis of the crises caused by scandals past and present.

“Often our own assessments of ecclesial life also sound like tales of hopelessness”, His Holiness said: “Those who fail to view a crisis in the light of the Gospel simply perform an autopsy on a cadaver.”

“We need to stop seeing the reform of the Church as putting a patch on an old garment, or simply drafting a new Apostolic Constitution. The reform of the Church is something different”, pointed out the Pope referring to the reform of the Curia that he initiated at the very onset of the his pontificate: “It cannot be a matter of putting a patch here or there, for the Church is not just an item of Christ’s clothing, but rather his Body, which embraces the whole of history”, Francis goes on: “We are not called to change or reform the Body of Christ – ‘Jesus Christ is the same yesterday, today and forever’ – but we are called to clothe that Body with a new garment, so that it is clear that the grace we possess does not come from ourselves but from God.”

“The Church is always an earthen vessel, precious for what it contains and not for how it looks”, the image chosen by the Pope: “These days it seems evident that the clay of which we are made is chipped, damaged and cracked. We have to strive all the more, lest our frailty become an obstacle to the preaching of the Gospel rather than a testimony to the immense love with which God, who is rich in mercy, has loved us and continues to love us.” “No historical form of living the Gospel can exhaust its full comprehension”, Francis said: “If we let ourselves be guided by the Holy Spirit, we will daily draw closer to all the truth.

Without the grace of the Holy Spirit, we can even start to imagine a synodal Church that, rather than being inspired by communion, ends up being seen as just another democratic assembly made up of majorities and minorities. Like a parliament, for example: and this is not synodality. Only the presence of the Holy Spirit makes the difference.”

“Each of us, whatever our place in the Church, should ask whether we want to follow Jesus with the docility of the shepherds or with the defensiveness of Herod, to follow him amid crisis or to keep him at bay in conflict”, is the Pope’s invitation to carry out in-depth reflection based on the awareness that “a crisis is itself movement, a part of our journey. Conflict, on the other hand, is a false trail leading us astray, aimless, directionless and trapped in a labyrinth; it is a waste of energy and an occasion for evil”, and the first evil that conflict leads us to, and which we must try to avoid, is gossip, which “turns crisis into conflict”: even in the Curia “where there are many doors and windows.”

“Let no one wilfully hinder the work that the Lord is accomplishing at this moment”, is the final wish, along with the Christmas greetings and expressions of gratitude “for your work.” “The poor are the centre of the Gospel”, the Pope added in unprepared remarks, quoting from “that saintly Brazilian bishop: ‘When I am concerned for the poor, they call me a saint; but when I keep asking why such great poverty exists, they call me a communist.’”
[M. Michela Nicolais – SIR]