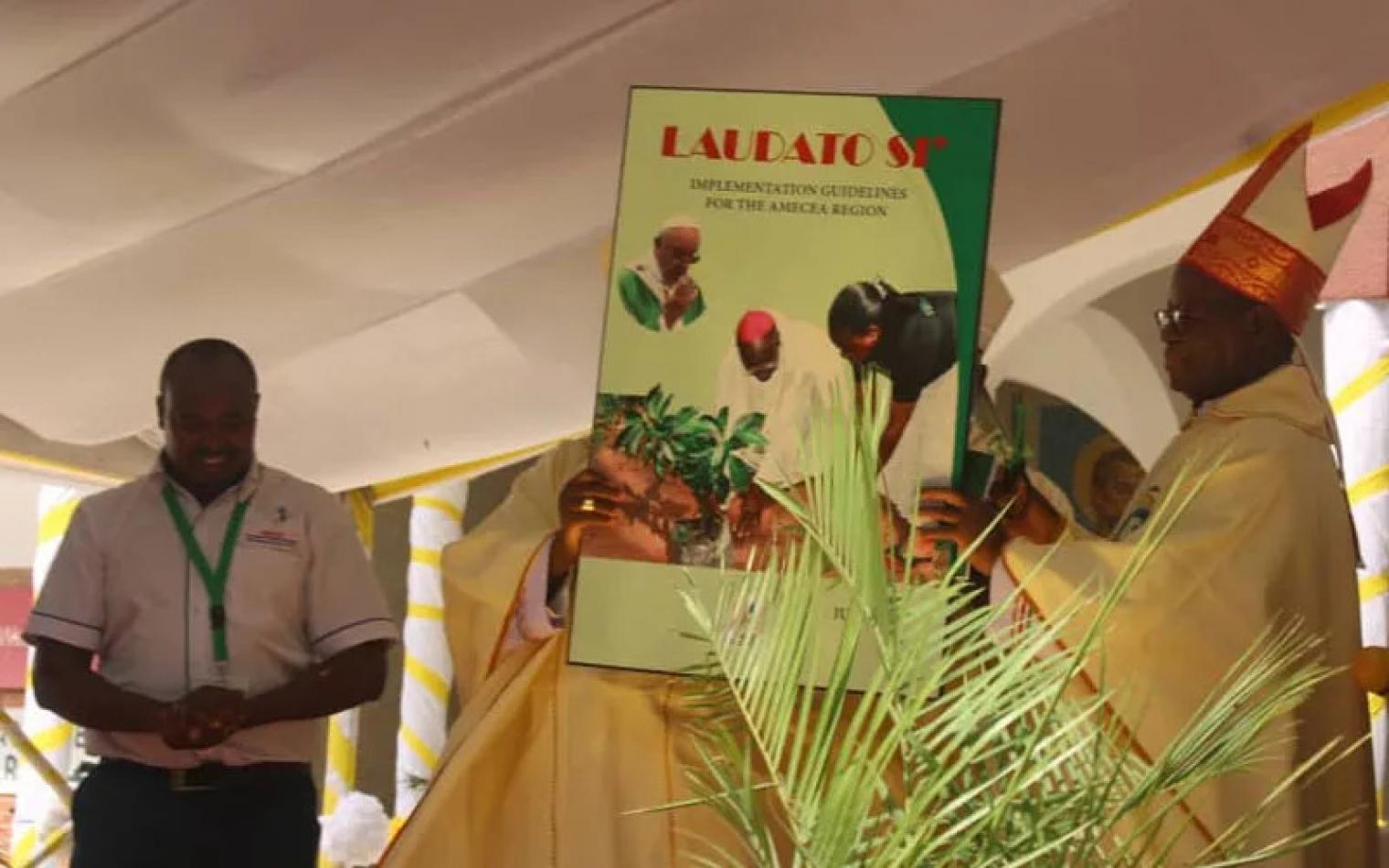 Thursday, July 21, 2022
Bishops of the Association of Member Episcopal Conferences in Eastern Africa (AMECEA) have unveiled a document to provide guidelines for the care of the environment, and tasked Small Christian Communities (SCCs) in the region to be on the forefront of creating awareness on the guidelines. [
Catholic Bishops in Eastern Africa present the Laudato Si implementation guidelines for the AMECEA region. Credit: ACI Africa]

“It is our hope that the themes of the action plan shall be shared during Small Christian Community meetings so as to have a proper understanding of the care for the environment,” Bishop Rogath said at the launch of the document that followed the concluding Holy Mass of the 20th Plenary Assembly of AMECEA in Dar es Salaam, Tanzania.

The member of the Congregation of the Holy Spirit (Spiritans) also expressed confidence that the 85-page document which had been compiled by AMECEA Bishops would be translated into “various languages” in the region to rope as many people as possible in its discussion. “We hope the guidelines can be translated into the various languages of our region, including English, Arabic and all the languages that our people engage in,” the Tanzanian Catholic Bishop said.

Bishop Kimaryo who wrote the foreword of the document notes that individuals, families, SCCs, parishes, dioceses and all Catholic institutions have a duty to undertake “the proposed seven-year journey of integral ecology”. The Local Ordinary of Same says that chapters of “Laudato Si’: Implementation Guidelines for the AMECEA Region” mirror the goals of Pope Francis’ document on the care of the environment. The document, the Bishop explains in the Foreword, is meant for use by Bishops, Priests, women and men Religious, institutions, Catholic faithful and people of goodwill in response to the care for “our common home”.

As for the Chairman of AMECEA, Bishop Charles Kasonde, the launched guidelines provide an opportunity for the association to take up its place in contributing to the implementation of the stated goals of Laudato Si’. The guidelines, the Bishop of Solwezi in Zambia who wrote the Preface of the document says, “challenge us to both a prayerful introspection and a committed response towards care for the ecology.”

He says, in reference to the environment guidelines, “They also affirm the already existent best practices while calling others to transition towards the desired standards for making Laudato Si’ alive.”

“The successful implementation of these guidelines will highly depend on the openness of the conferences to domesticate and contextualize them,” Bishop Kasonde says in the Preface. The AMECEA Chairman who was re-elected for a second four-year mandate adds, “As part of our commitment to implement the Laudato Si’, I urge all my brother Bishops, agents of evangelization and people of good will to take up and implement these guidelines with the enthusiasm they deserve in nurturing our common home.”

Another document, “Chaplaincies Ministries and Apostolates: A Catholic Guide of Provision of Chaplaincy and Apostolate Services in the Region”, was also unveiled as AMECEA Bishops marked the end of their 20th Plenary Assembly in Dar Es Salaam, Tanzania. The document is divided into three sections, which are further organized into various chapters.

Others are apostolate to public transport drivers, motorcycle riders and touts, apostolate of the sea and water bodies, apostolate to virtual congregations, and media houses. In his address at the July 17 launch, the Chairman of AMECEA’s department of integral human development, Archbishop Alick Banda of Lusaka Archdiocese said the book is set to serve groups that do not exist in Parish set-ups.

“The book on the Chaplaincy is a fruit of the last plenary in Ethiopia where we deliberated and acknowledged one failure, namely, the failure to touch the hearts of our people, especially those that are not provided for in the Parish set-up,” Bishop Banda said referencing the 19th Plenary Assembly of AMECEA held in Addis Ababa, Ethiopia, in 2018.

“We have come up with this document that is going to help us in meeting the challenges of our people,’ the Zambian Archbishop said, and added, “It is a document to be used across the AMECEA region, to be translated, and to be adopted by various Dioceses as well as institutions that are doing pastoral work.”