Missionary Journey of Sister Tommy Johnston: “Under the tree” 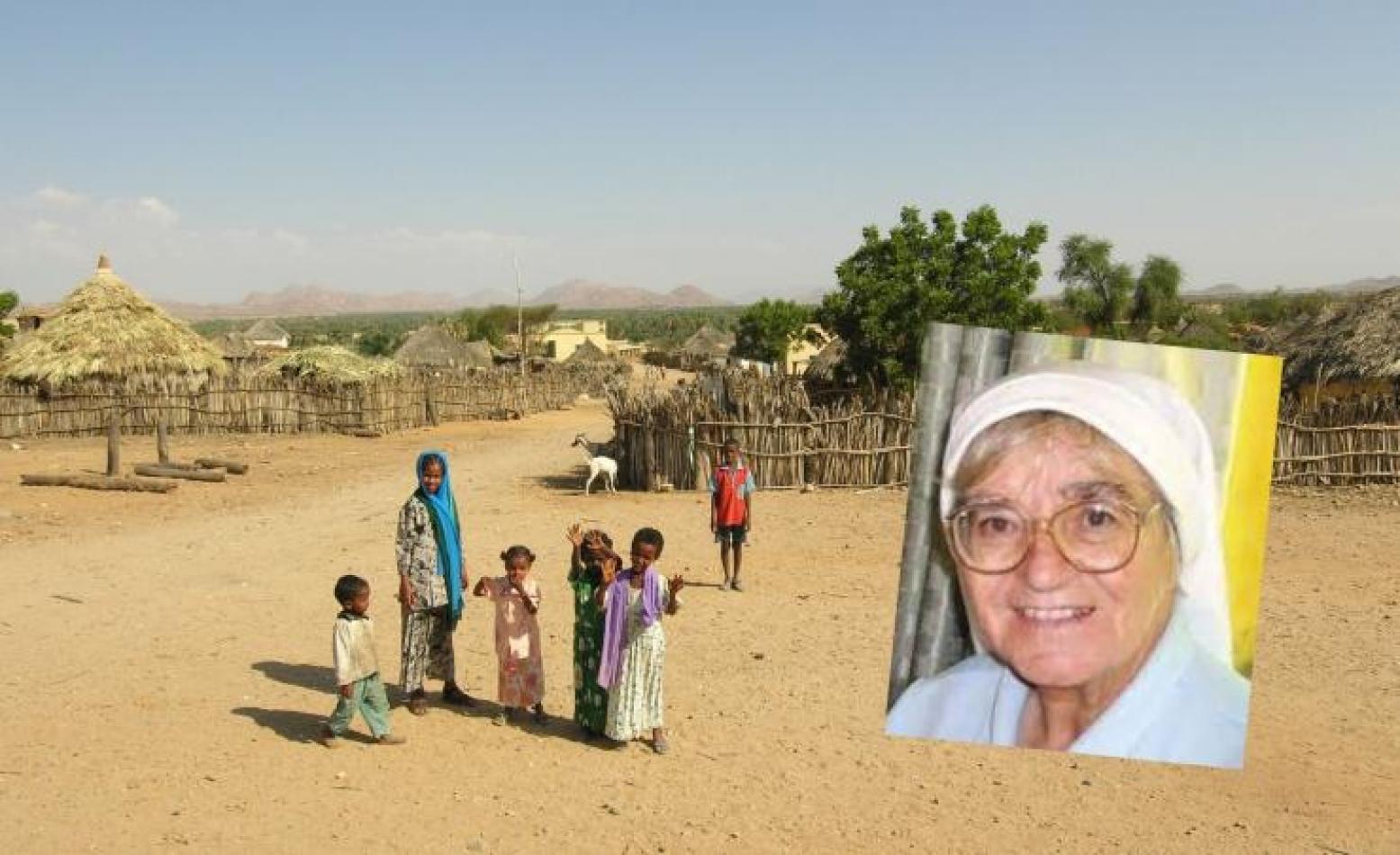 Sunday, May 15, 2022
For fifty-seven years, she has been in Eritrea. Now she is back home. “I have two nations in my heart, two peoples to love and pray”. It feels unreal to be back in my home country and not to be counting the weeks till I return ‘home’ to my mission country. The heartstrings tug quite a bit to be off again and then pull to the feeling of being among my ‘ain folk’ and no need to brace myself for leaving the family once again.

‘Being home’ permanently is hard to grasp, and this is a blessing; Yes, truly it is, or the soul could not bear the emotion. You see, this missionary belongs to two places – belongs to two peoples. I was born in Glasgow of working-class parents.  I am an only child. In 1960 I was working as a music teacher in a school in Berwick-on-Tweed and enjoying the country life surrounded by sheep and horses and dogs and of course, friendly people.

Meanwhile, I had met the Sisters of Verona at a religious vocations exhibition in Glasgow, and a little something began to stir in me. Then, one evening at home in the kitchen I said “Mum and Dad, I want to become a missionary, Sister.” There was a long silence broken quietly by my Dad – “If God has chosen you to be a missionary, we are privileged.” A few months later I entered the postulancy of the then Missionary Sisters of Verona in London.

After three years and many joys and tears, I was off to the missions. I didn’t care a jot where; I was a member of a missionary family ready to face the devil himself to serve the Word of God.
In 1964 I landed at the airport of Asmara, the capital of my new land – Eritrea. There I remained for fifty-seven years, time enough and more for the people of that land to worm their way into my heart. And worm they did! My dream of sitting under a tree teaching catechism was dashed on arrival; I was sent to teach English at the newly formed Pre-university of Asmara, certainly tougher than sitting under trees, but that’s what was needed at that time and that’s what followers of Comboni do – what no ‘other body’ will do. So, I taught English – with some Glasgowegianisms thrown in – and I studied to gain a higher qualification.

At weekends I joined short safaris to the surrounding villages. I learned the customs and traditions of the Eritrean people; some villages were wholly Catholic and others were wholly Orthodox and some again in the low-lying areas were wholly Muslim. Language and customs, ways of dressing, and type of foods cooked in the mountainous areas towards the south are very similar to those of the northern area of Ethiopia.

Towards the north and west – the lowland area leading to the border with Sudan, there are four ethnic groups – Bilen, Christian, who have adapted themselves to living beside Muslim communities, Tigre and Nara, who are mostly Muslim, and Kunama who are animists although some have become Christian due to the work of the Capuchin Franciscans who have built up missions in that area.

For sixteen years I lived in Asmara, working at the University of Asmara which was founded by the Comboni Missionary Sisters. Notwithstanding many trials and tribulations and in the middle of a guerrilla war between Ethiopia and Eritrean freedom fighters, it was very fulfilling to witness the students grow and develop with great enthusiasm for their courses and their great joy at graduation. Also, the Comboni Community was large and varied in nationality, age, status – some were teachers, some were students – some were both, teaching in the preuniversity and attending university courses probably in the evening.

In 1996 I was transferred to the Comboni Community at Afabet, 170 kilometres north of Asmara. Here the population is 97% Muslim of the Tigre ethnic group and our community of three lived very happily among these friendly people.

We ran a kindergarten for infants and a sewing school for young girls and women. Later we developed a multipurpose centre which included a library and facilities for tutoring. With the help of some NGOs, we set up a computer centre – nine computers powered by an old generator which made so much noise that we called it ‘Mr. Grumph’. In this way, I found myself among young people. Other side activities such as bandaging up cut knees and disinfecting sore eyes, tending our own goats (for milk), and visiting our neighbours, filled each day.

There were also five Catholic families whom the community served in their spiritual needs. Mass was celebrated once per month when possible; a priest would come from the nearest town seventy kilometres of dirt track road. This was the most joyful period for me – living among the people, feeling myself part of the community, trusting and trusted. Just last year, I was called to transfer to Scotland and returned to be part of our new Comboni Community in Paisley…… I have come home to my ain folk and am beginning to understand the gift God gives to missionaries: Yes, I belong to Scotland and am happy to live among the generous people of St. Paul’s parish, Foxbar. And yes, I belong (and always will) to Eritrea and to her people old and young. I have two nations in my heart, two peoples to love and pray for and hold until we’re all united in heaven. And that will be a glorious meeting.