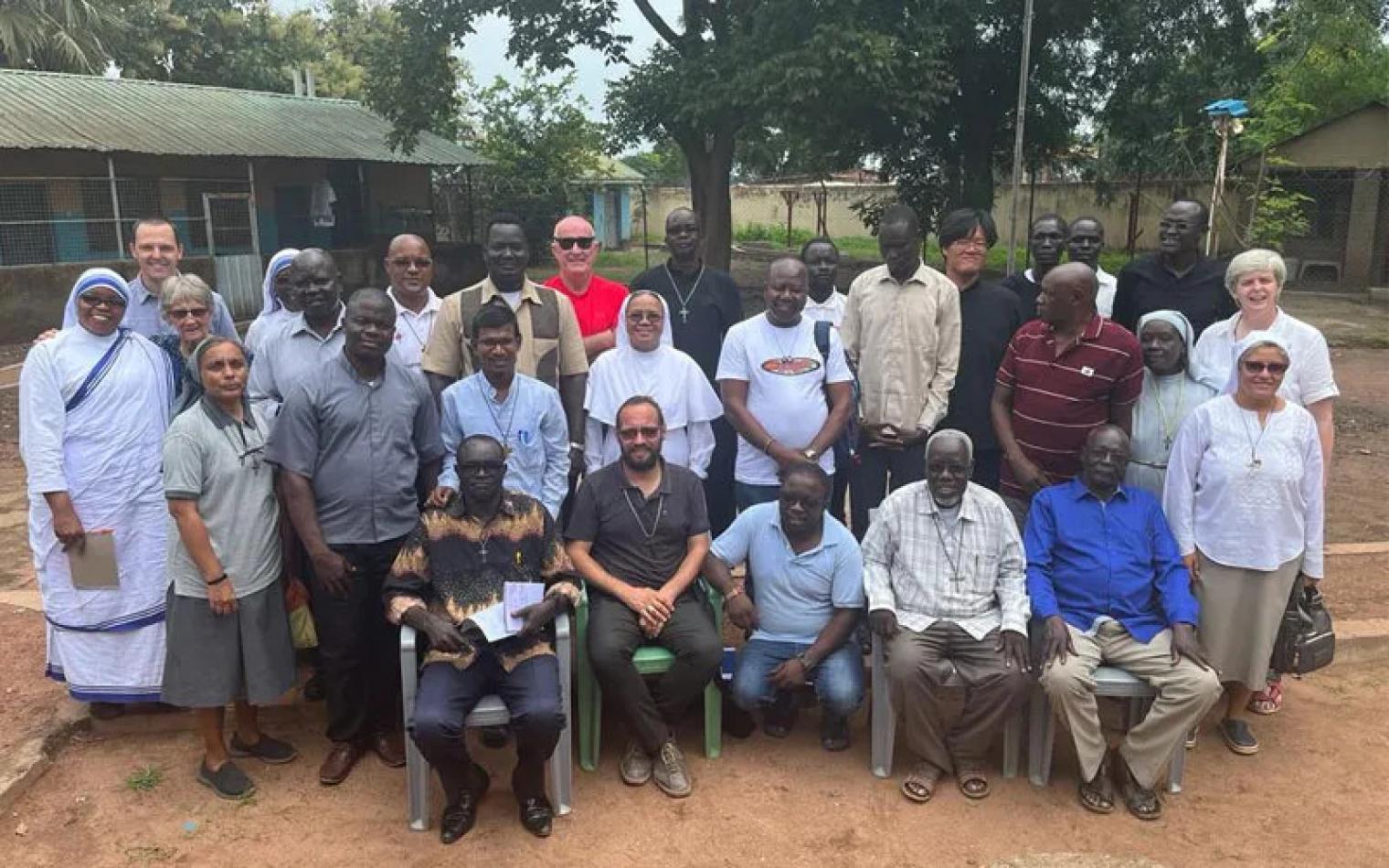 Thursday, August 11, 2022
In an interview with ACI Africa following the July 25-30 gathering of “all secular clergy and members of the religious institutes working in the diocese of Rumbek” that Bishop Christian Carlassare had announced in his June 28 letter, challenges in the ministry among the people of God, the need for “a common path of faith” and establishing Diocesan structures were also highlighted. [Credit: Courtesy Photo. ACI Africa]

The need to go beyond discussing about the ongoing preparations for the Synod on Synodality to “doing synodality” is among the highlights of the recently concluded “Diocesan Week” on synodality in the Catholic Diocese of Rumbek, the Bishop of the South Sudanese Episcopal See has said.

In an interview with ACI Africa following the July 25-30 gathering of “all secular clergy and members of the religious institutes working in the diocese of Rumbek” that Bishop Christian Carlassare had announced in his June 28 letter, challenges in the ministry among the people of God, the need for “a common path of faith” and establishing Diocesan structures were also highlighted.

“We discerned about concrete steps to work in Synodality”, Bishop Carlassare said about the series of sessions that were preceded by a day of recollection, during which he said they “were invited to meditate on the group of the apostles gathering around Jesus on the last supper called to make the experience that each of them/each of us is the beloved disciple” and especially how they were to “answer to that love” and the challenge of making a community of pastoral agents in Rumbek Diocese. In reflecting about “concrete steps” of the synodal process, the Bishop said in the August 5 interview, the aim was to go “beyond talking synodality” to “doing synodality, which means journeying and working together in unity.”

The coming together of the Clergy and women and men Religious ministering in the South Sudanese Diocese that had been vacant for more than 10 years following the death of Bishop Caesar Mazzolari in July 2011 brought the realization that there is still “so much needed in our church of Rumbek”, the member of the Comboni Missionaries (MCCJ) who was consecrated Bishop on March 25 said. In October 2021, Pope Francis formally launched the two-year global consultation process leading to the 2023 Synod on Synodality with a call to “look others in the eye and listen to what they have to say.”

Earlier, in May 2021, the Vatican had announced that the Synod on Synodality would open with a Diocesan phase lasting from October 2021 to April 2022. A continental phase, the second, is to take place from September 2022 to March 2023. The third, which is the universal phase, would begin with the XVI Ordinary General Assembly of the Synod of Bishops, dedicated to the theme, “For a Synodal Church: Communion, Participation, and Mission” at the Vatican in October 2023.

In September 2021, the Vatican released a preparatory document and handbook for the 2023 Synod to be reviewed by all Catholic Dioceses in the world over the next six months. The handbook includes prayers, a description of Synodality, the objectives of the Synodal process, and the main questions to which the local Catholic communities are asked to give feedback. It underlines that Dioceses focus on “maximum inclusion and participation” among baptized Catholics in the Diocesan Synod process.

The preparatory document has been released for a period of “pre-Synodal discernment” that will influence a second draft of the text to be published before June 2023. According to the Vatican, the preparatory document is “a tool to facilitate the first phase of listening to and consulting the people of God in the particular Churches” for the Diocesan phase of the Synod.

One objective of the Synod on Synodality, according to the preparatory document, is to encourage a participative and inclusive process that offers everyone, especially those who for various reasons find themselves on the margins, the opportunity to express themselves and to be heard in order to contribute to the edification of the people of God.

In the August 5 interview with ACI Africa, Bishop Carlassare recalled the orientation they had “on synodality as it has been proposed by the universal church” during which documents related to the preparation for the next Synod were studied. During these sessions, the Italian-born Bishop who has ministered in South Sudan since 2005 said, participants “worked in groups to answer the questionnaire proposed by the church.”

Participants in the Diocesan Week on Synodality sought “to understand where we are as the church of Rumbek within the universal church,” he said, adding that deliberations were toward establishing “a common path of faith and ministry in a changing and challenging world.”

“We looked at the reality of the diocese of Rumbek,” he went on to recall the sessions of July 28, and added, “Some commissions reported about the work done during the last year and the challenges that we still have to face.”

Participants in the Diocesan Week on synodality came up “many proposals” with regard to “doing synodality” in Rumbek Diocese, Bishop Carlassare whose Episcopal Ordination had to be postponed to 2022 after he was attacked and shot in both legs said. As a way forward, four committees were established “with specific tasks”, he said, referencing the Pastoral, Liturgical, and Catechetical (PALICA) committee, the youth committee, the Catholic education committee, and the human formation committee.

While the PALICA committee will facilitate the generation and realization of “new pastoral initiatives in collaboration with parishes and other pastoral premises (such as) share material, ideas and study ways to promote our Pastoral activities,” the Bishop said, members of the youth committee have the task of generating “a program for the youth with initiatives that will foster participation and a real growth in faith.”

The Catholic education committee is to “reinforce the Catholic identity of our schools, foster holistic formation, extra-curricular activities for spiritual formation, help form CRE teachers, give them Catholic formation … (and) support the Education Office,” Bishop Carlassare said. As for the human formation committee, members will have the task of spearheading initiatives to “accompany and care for the human formation of our seminarians, clergy and religious missionaries, and lay pastoral agents,” the 44-year-old Bishop told ACI Africa.

The South Sudanese Diocese is planning for a Diocesan Pastoral Assembly in February 2023 that will see the coming together of representatives from the 16 Parishes of the Diocese, and the Diocesan coordination departments and offices.