Ethiopia: Hope for a Small People 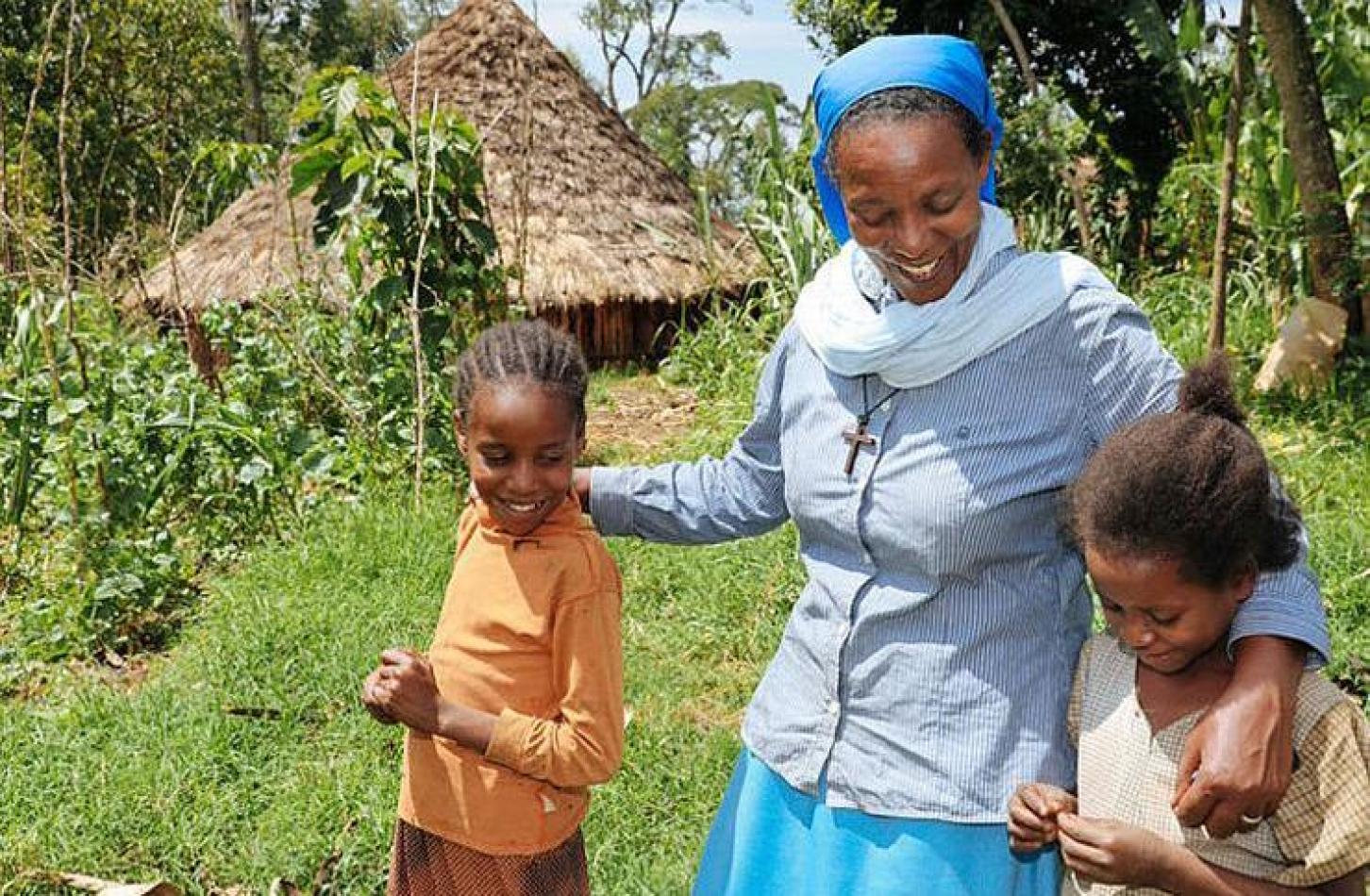 Friday, February 1, 2019
The Menjas live in the south-west of Ethiopia. They are marginalised and discriminated by other ethnic groups. Two Catholic sisters stand up for them.

In the shadow of the giant jungle trees, Kenito Atumo squats on the ground, plucking out every green stalk that sprouts from the ground near his little coffee plant. “Weeds are the enemy of the coffee plant”, he explains to sister Kidist Habtegiorgies, who is kneeling next to him. Under the umbrella of the rainforest that protects from the blazing sun, the man grows coffee seedlings. It takes three to four years of intensive care before you can pick the cherries from a coffee tree.

“We cannot live from growing coffee alone. We still do not have enough fully grown trees”, says Kenito. The Sister listens attentively. She knows the difficult situation of the families in her village. “They work very hard. But despite all efforts, sometimes they can afford just one meal a day”, explains Sister Kidist. She is a member of the ‘Little Sisters of Jesus’. She and her colleague Sister Askalemariam Kario look after many families in Wush-Wush, a small town in south-western Ethiopia. Most of them belong to the group of Menjas, a small population of forest dwellers who mostly follow the faith practices of traditional African religions. Due to their cultural diversity, especially because they eat certain wild animals, the Menjas are marginalised and discriminated against as ‘untouchable’ by the Kaffa people, the majority population in the region.

Formerly excluded from feasts and gatherings, the Menjas were not allowed to enter the Kaffa houses, to sit at table with them, or to dine with them. Today, through education and enlightenment, the acceptance of the Menjas has improved although social isolation and discrimination still shape community living. The two Sisters are not willing to accept that and try to have direct contact with the Menjas families.

A simple round hut made of branches and clay and covered with a leaky thatched roof is the home of Kenito Atumo’s family. In a field next to the hut, the 22-year-old father grows corn and bananas. His two children, four-year-old Israel and his one-year-old sister Mekidze, run barefoot toward Sister Kidist. Again and again they rub their eyes and brush away the flies buzzing around their heads. Mother Tigist looks worriedly into their reddened eyes and says apologetically: “We do not have clean water here. I have to get it from far away every day”.

Sister Kidist invites the two to join the Congregation’s kindergarten. There the Sisters offer not only care but also washing facilities and a hot meal. Kenito promises to bring the children there, even if it is a long way to the kindergarten. “When we came to Wush-Wush a couple of years ago, we thought about how to help these people, how to improve their financial situation, how to increase their self-esteem”, says Sister Kidist, the superior of the religious community in the small village of the Catholic Vicariate of Jimma-Bonga.

Although at first everything seems green and fertile in the tree-covered region, the inhabitants often do not have enough to eat. They simply lack the necessary knowledge to cultivate the land effectively. Added to this is the phenomenon of the ‘green drought’. It does not rain enough, the seeds do not sprout and people go hungry. The sisters taught a group of women how to grow vegetables effectively so that they could earn some money. “At the beginning it worked very well. The women were really excited and proud”, recalls the 45-year-old.” But then a group of wild monkeys found their way to the vegetables and destroyed the whole crop”. But giving up was out of the question for the Sisters. They bought a knitting machine for the women, and now the group produces cardigans, sweaters and blankets which she sells in local markets.

“Almost every day, people knock at our door asking for advice or pleading: ‘Please help us, my child is ill.’ or, ‘my wife is dying’, Sister Askalemariam reports. “We help wherever we can, whether it is a leg fracture or pregnancy complications. Our pick-up is available to the entire village for emergencies”. The Sister recalls a seriously ill girl she spotted on her visit to the village. She did not think twice but put her in the car and drove her at a brisk pace to the two-hours distant city of Jimma and a larger hospital. There the girl was treated and survived.

But sometimes the sisters are unable to help. “If parents ask us to bear the costs so that their children may go to the high school or to the college, we must decline. Because these facilities are located in the city and we would also have to pay for lodging and maintenance. For that we simply lack the financial resources”, says Sister Askalemariam. For younger children the church runs a boarding school that accepts also children from poor families.

In Wush-Wush, some students earn something extra in the coffee factory run by a Catholic. In their spare time, they sort out coffee beans that were not peeled off during the mechanical processing. The factory owner pays the farmers a fair price if their coffee is of good quality. Also Kenito Atun would like to sell his coffee to him if his cherries are of good quality. The young man is confident: “God is the creator of all things. He gave me two children. As a way of saying thanks, I named my son Israel. I trust in God”.

Sister Askalemariam is happy about his confidence. She still remembers her early days in Wush-Wush. “Our Menjas were all very shy”, she says. “I used to talk to a woman who used to sell firewood to us. One day I asked her to come in to our house but she felt ashamed. ‘Alemeto, come in, you are our friend’, I said to her. Finally she entered. We sat down, ate bread from the same plate and drank coffee together, as is customary among us here in Ethiopia. When Alemeto said goodbye, tears came to her eyes and she said: ‘Today your God and my God have met’. I also started crying – for joy.”

Since then much has changed. When the Sisters invite people to a feast, the Menjas families with whom the sisters have become friends also come. They also attend the religious service. They say, “You are our sisters, you are our friends. We come to your church where we are we are accepted and understood. Now it is our church too”.
[Bettina Tiburzy –
Comboni Missionaries]